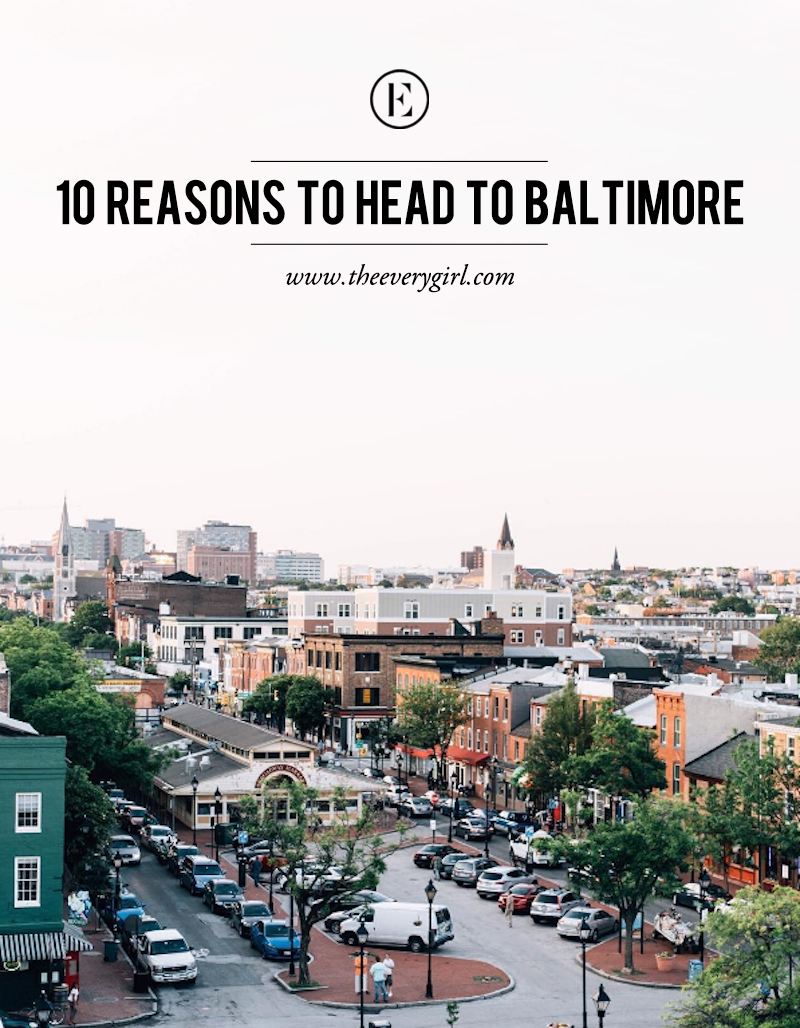 When I tell people that I’m from Baltimore, MD, I can pretty much predict the response I’m going to get, and that response is almost never “Really? I’ve always wanted to go there!”

And this is where most people get Baltimore wrong. Make no bones about it, our city has its struggles, and they can’t be ignored. But it’s also a place with tons of heart, charm and culture. Made up of quirky, diverse neighborhoods, hard-working folks and a thriving arts scene, this town has something for just about anyone. Without further ado, I give you ten reasons Baltimore should  be your next weekend getaway.

1. We’ve got more historical charm in one neighborhood than most cities altogether. 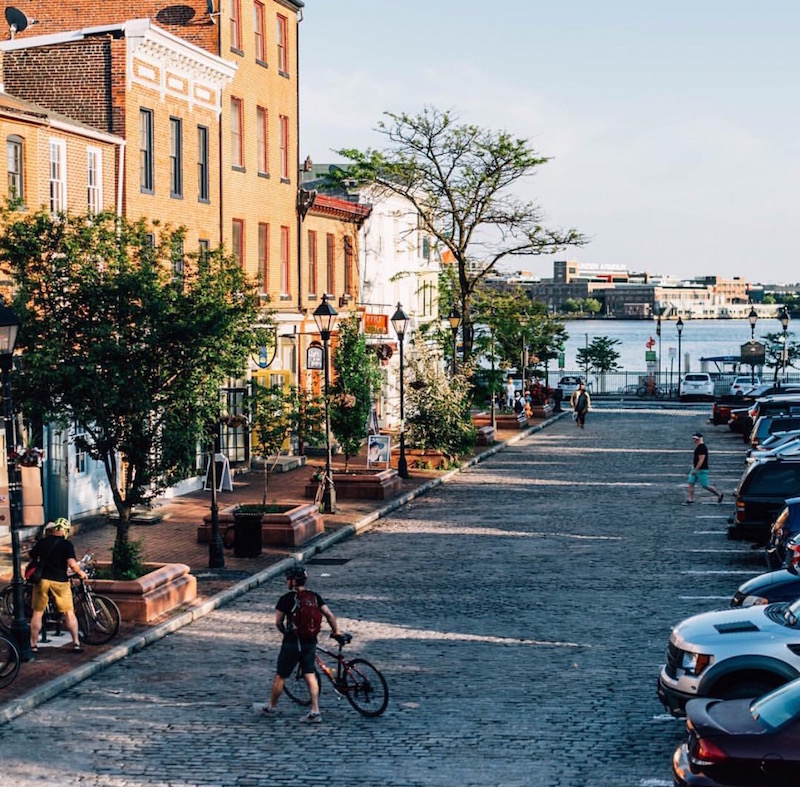 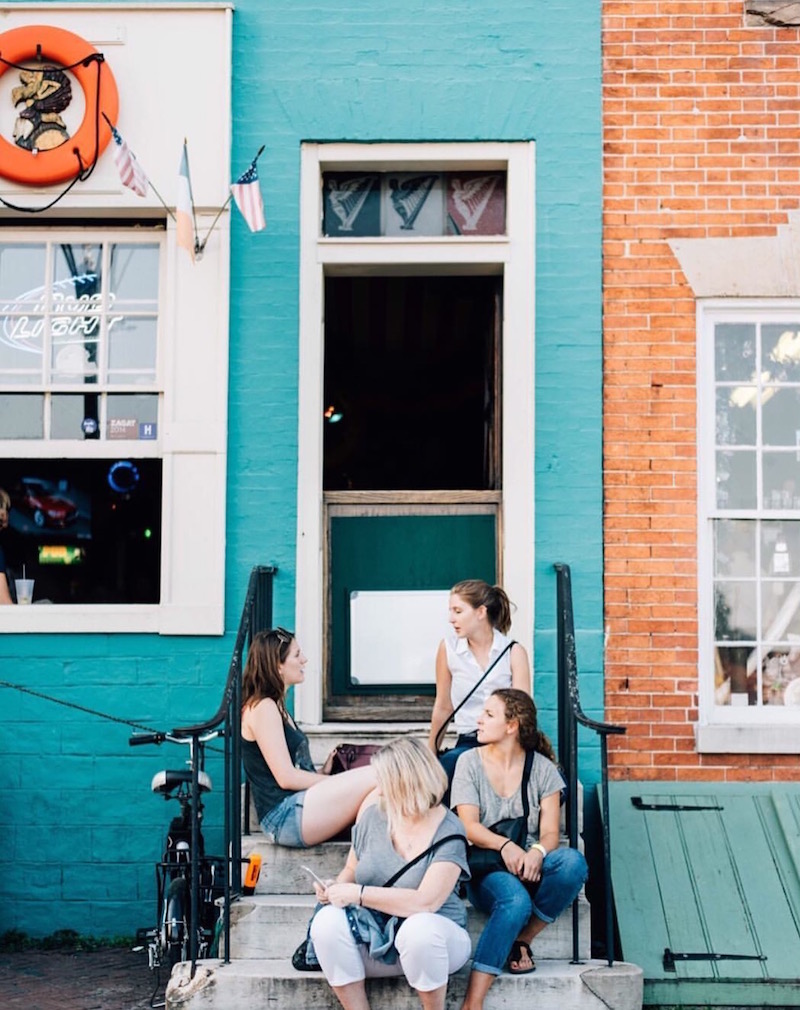 Bold claim, I know, but hear me out. Fells Point is one of my favorite neighborhoods in the world, and I’m pretty sure if you came here it would be one of yours too. That is, unless you have something against cobble-stoned streets, charming boutiques, bustling bars and a picturesque harbor, in which case, who exactly are you?

Fells is a go-to spot for locals and tourists alike. It’s home to one of Maryland’s most iconic bars, The Horse You Came In On, where legend has it Edgar Allen Poe made his last stop before mysteriously dieing hours later. Hopefully you think that’s cool, not creepy, but if you think its the latter, forget I said anything. On a sunny, Saturday afternoon, you’ll find the streets filled with outdoor diners, music, water taxis, and general merriment as locals take advantage of their waterfront neighborhood. Visiting in winter? The rowhome converted bars become cozy sanctuaries to enjoy a cocktail and a view.

2. The Mount Vernon cultural district will transport you to another place and time. 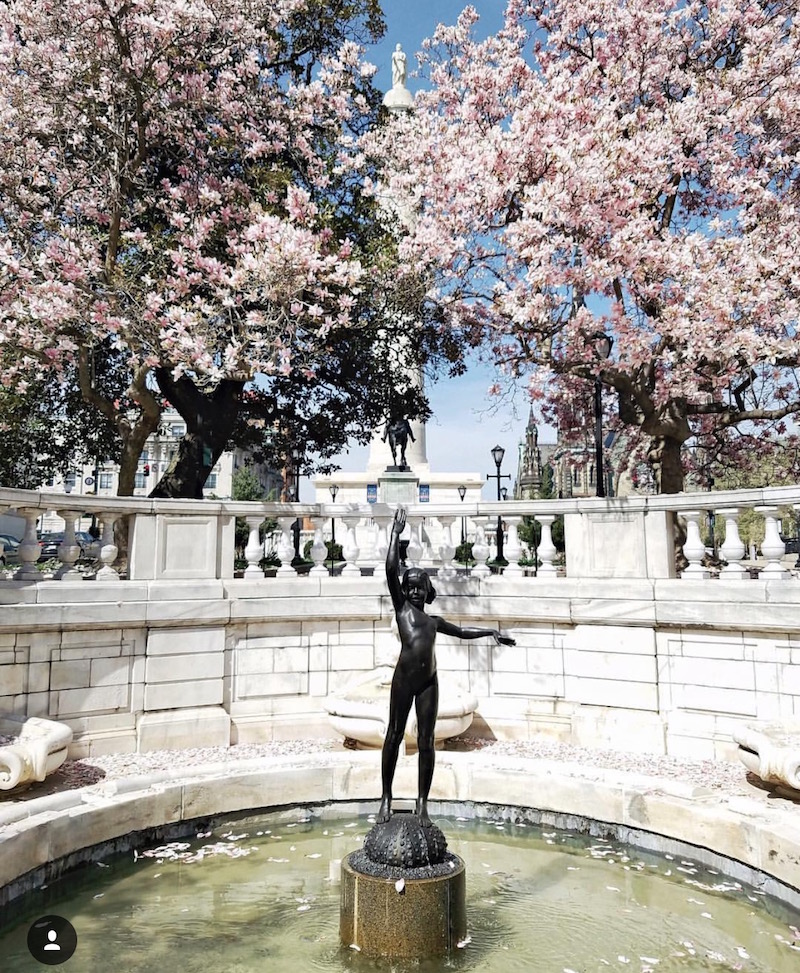 Source: With the locals 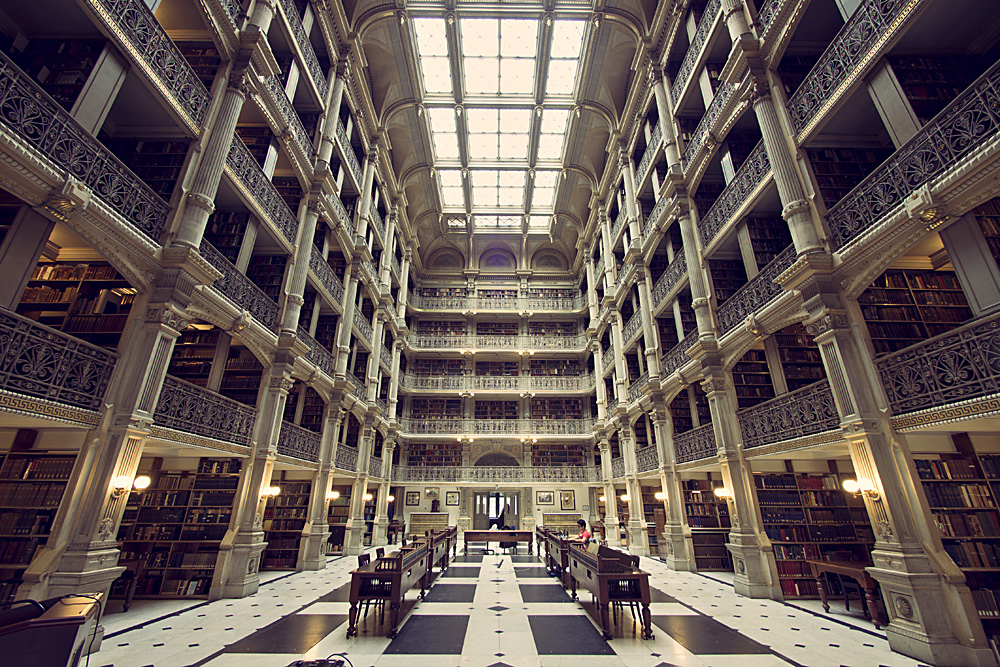 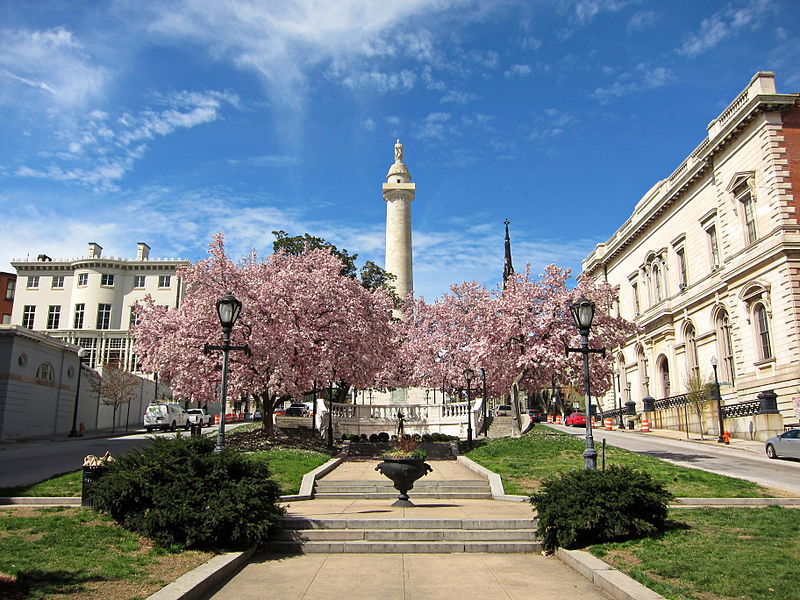 The cultural hub of Mount Vernon will certainly make you question your whereabouts, with architecture that encompasses a European sense of beauty and history. Yes, I just compared Baltimore to Europe. Stay with me. Did you know that the original George Washington monument was built here in 1817? ‘Cause it was. And then there’s the Walters Art Museum, Meyerhoff Symphony, and awe-inducing Peabody library, not to mention America’s first Catholic cathedral, which was recently restored. Top it all off with free yoga classes, movies in the park, and seasonal music performances right in the square, and Mount Vernon will have you whistling a different tune about Baltimore faster than you can polish off a drink at Sugarvale, the local cocktail and charcuterie bar.

3. You haven’t lived until you’ve had a Maryland crab feast. 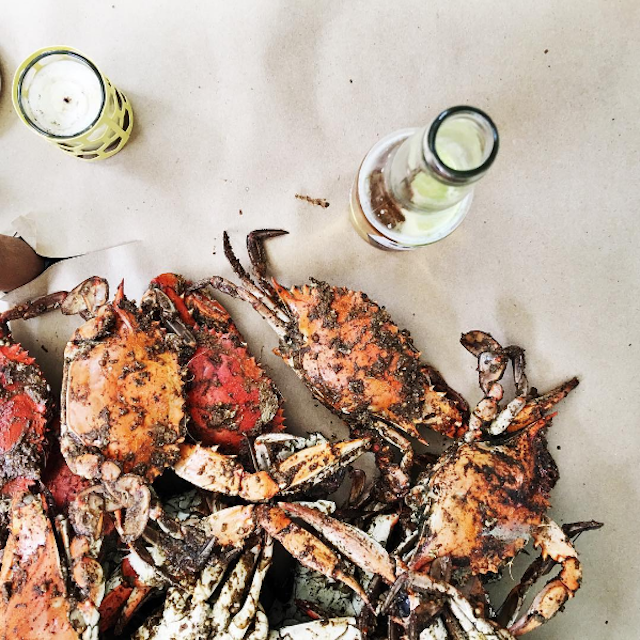 After partaking in all that Mount Vernon has to offer, you’ll be down for some grub, and there’s no better way to do lunch in Baltimore than by partaking in a crab feast. You can expect it to be messy, fun, and absolutely delicious. There’s an unending amount of options for crab houses all around Maryland, with some of the best being on the outskirts of the city. A few reliable spots right downtown are Bo Books, Canton Dockside, and Captain James Crabhouse & Restaurant. Wash it all down with a Natty Boh and you’ll be mistaken for a local in no time flat. 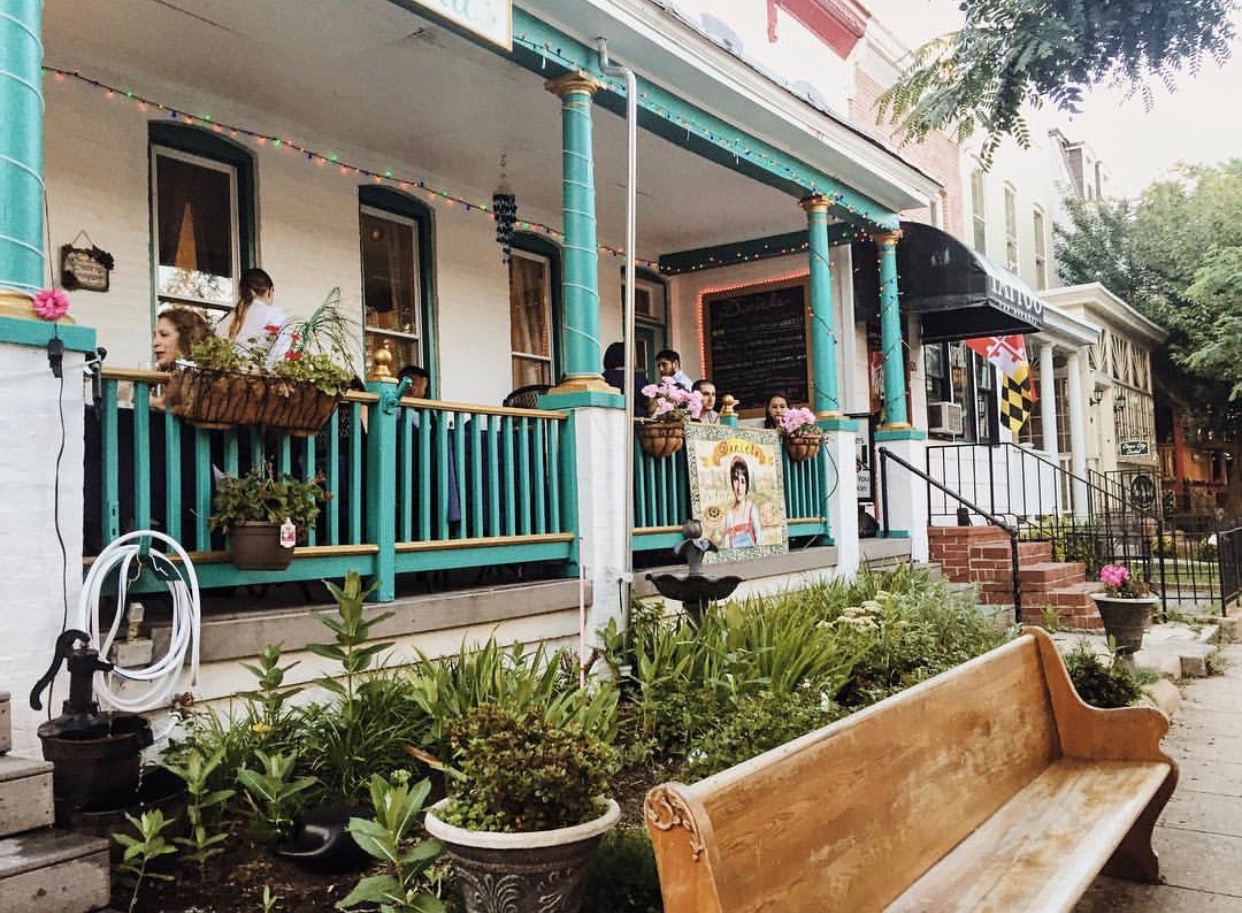 The colorful and off-beat Hampden neighborhood is home to Baltimore’s “hons,” known as local, lovable ladies from the ’60s dressed with beehive hairdos and cat-eye glasses who frequently used “hon” as a term of endearment. The annual Baltimore “HonFest” is one of the cities most major events, spanning two full days with hundreds of people and merchants coming together to celebrate the unique culture of the city. These days, Hampden is filled with some of Baltimore’s most highly acclaimed restaurants and shops, along with a few classic dive bars. Stop by The Charmery for a refreshing treat that will make you question everything you thought you knew about ice cream.

5. Even if you don’t love baseball, you’ll love Camden Yards. 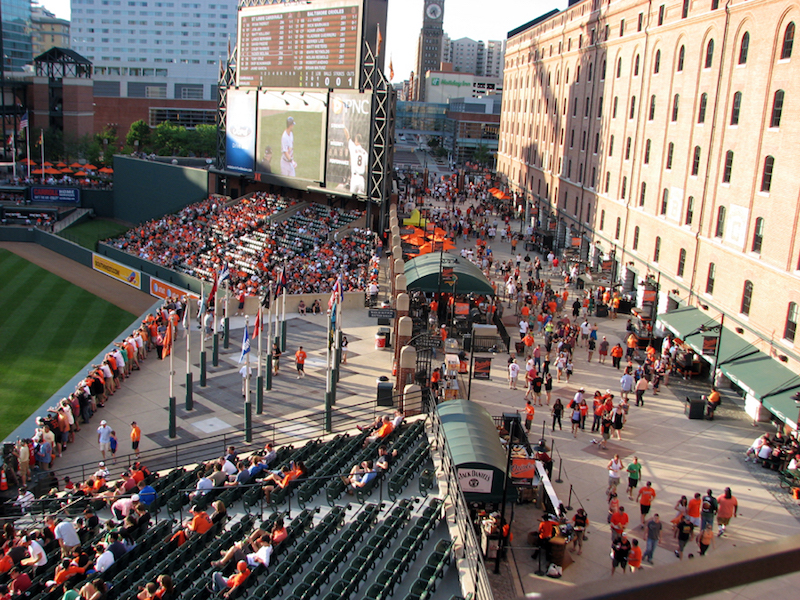 Regardless of how our birds might be doing on any given year, the caliber of the Oriole Park at Camden Yards is undeniable no matter which team you root for. The park is historically built over an old railroad station, and only 2 blocks from the birthplace of baseball’s most legendary hero, George Herman “Babe” Ruth. In fact, Babe Ruth’s father ran Ruth’s Cafe on what is now center field. In a nutshell, it’s the perfect blend of old and new, with plenty of bars and eateries to complete the entire experience, whether you came for the beer or the baseball.

6. Fort McHenry is a paradise for history buffs. 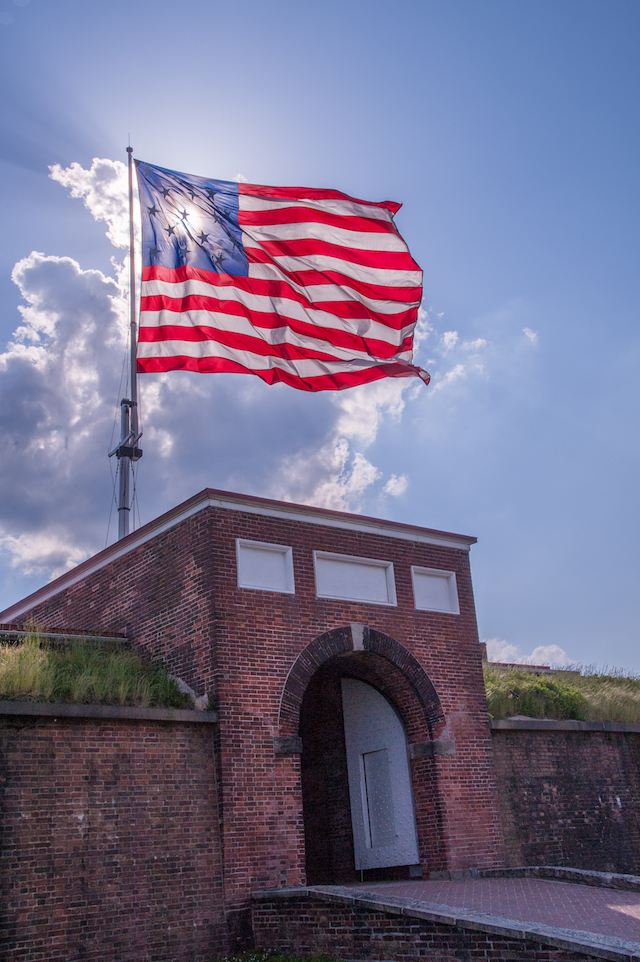 In 1814, Francis Scott Key penned a little song called “The Star-Spangled Banner,” which was written after he witnessed Fort McHenry being attacked by the British during the War of 1812, but still saw the single U.S. flag flying overhead at dawn. To this day, the fort is a history buffs dream, and easily accessible from downtown. 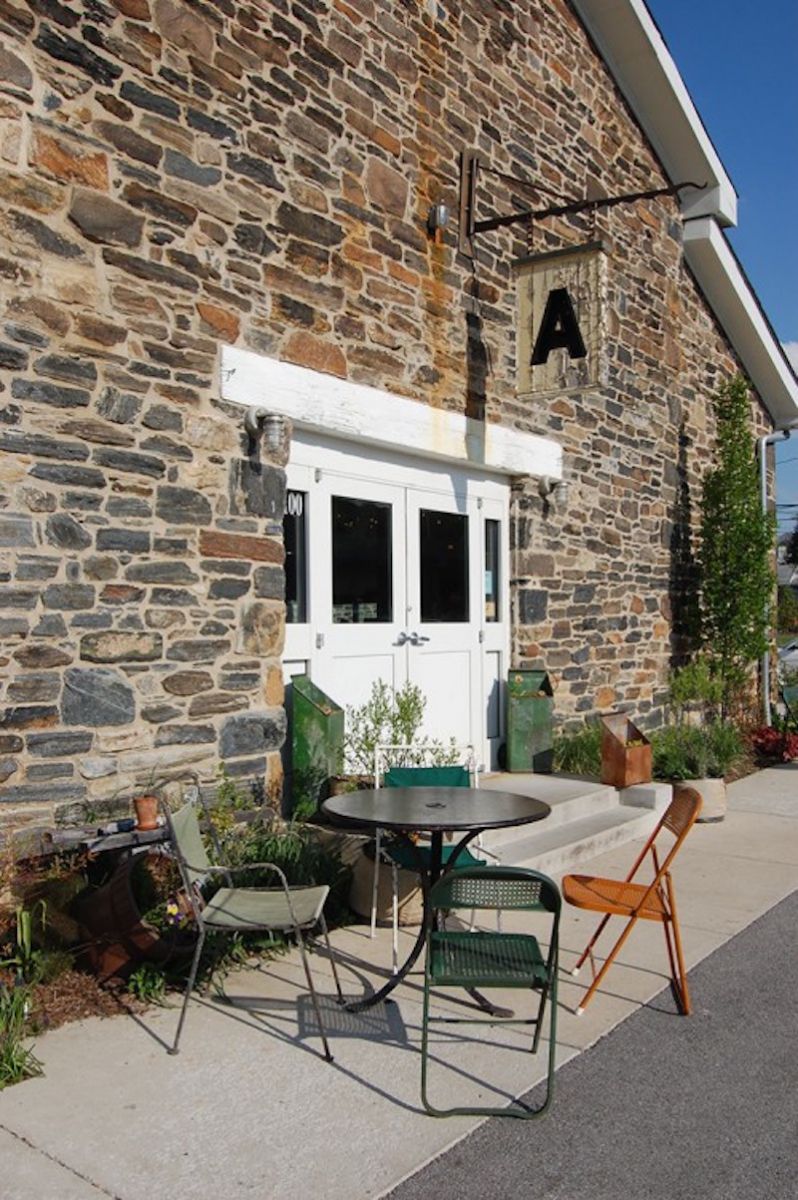 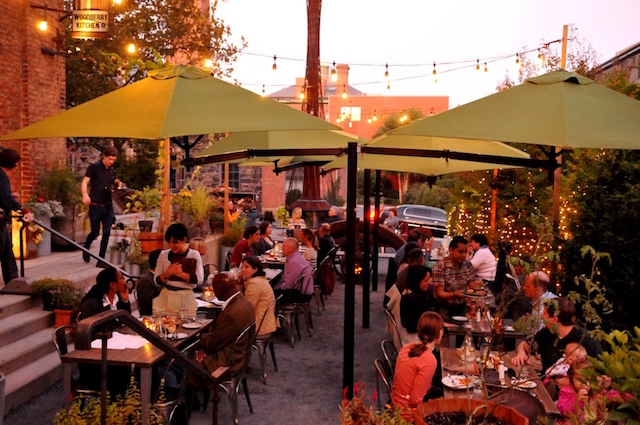 We may be known for our blue crabs, but don’t get it twisted; seafood isn’t the only trick we have up our sleeves. Baltimore is home to an array of incredible restaurants, and if you won’t take my word for it, you might take Zagat’s, who named Baltimore one of the top 17 food cities of 2015, noting that Spike Gjerde of local restaurant Woodberry Kitchen took home the James Beard Foundation Award in 2015 for the “Best Chef: Mid Atlantic” category. If you’re looking for something a little more budget-friendly, try out one of Gjerde’s other restaurants, like Parts & Labor, a modern butchery in a converted car-and tire-repair shop, or Artifact coffee, a charming old mill house with a farm-to-table brunch menu and lattes that are practically made for your instagram feed. 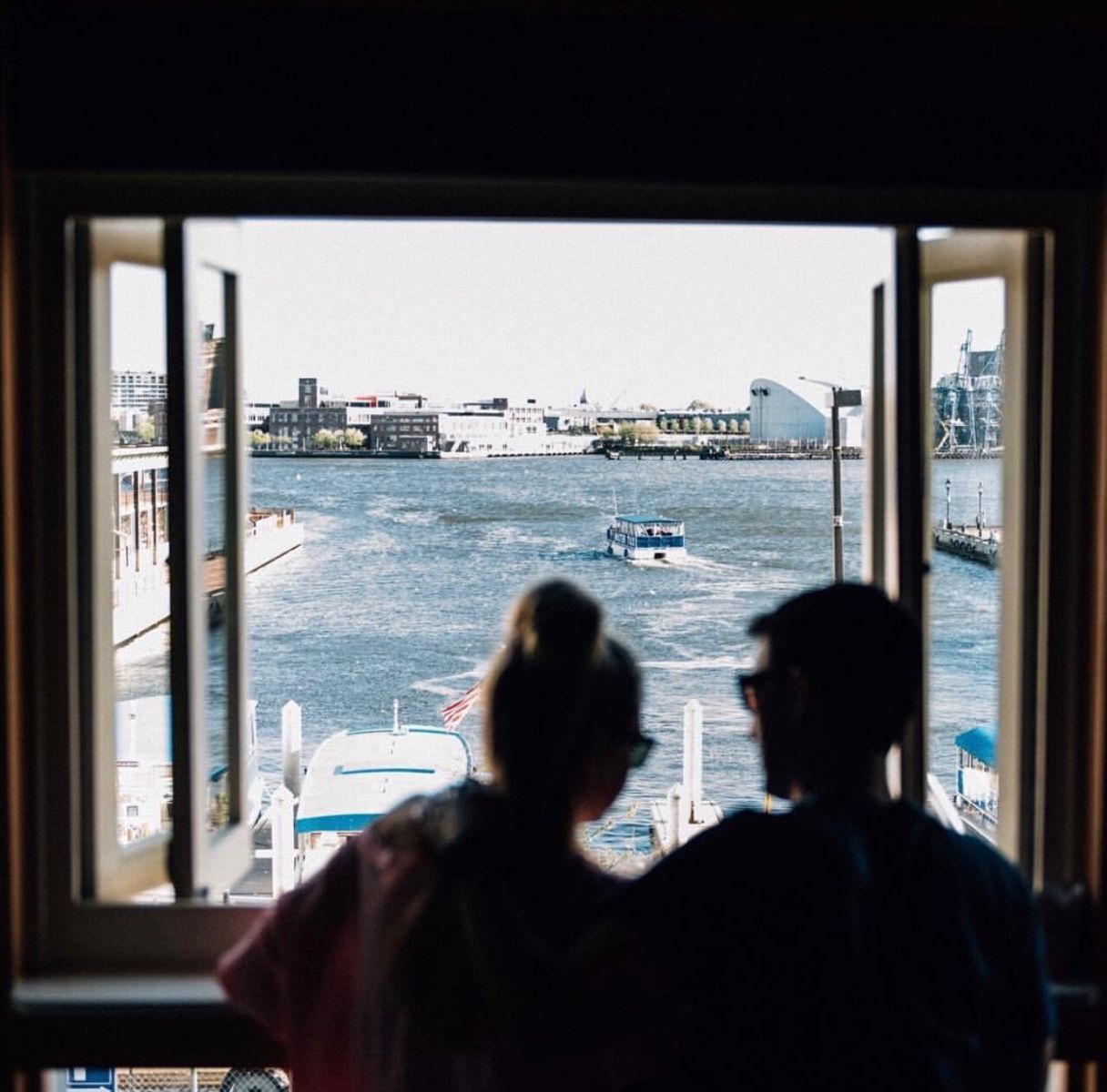 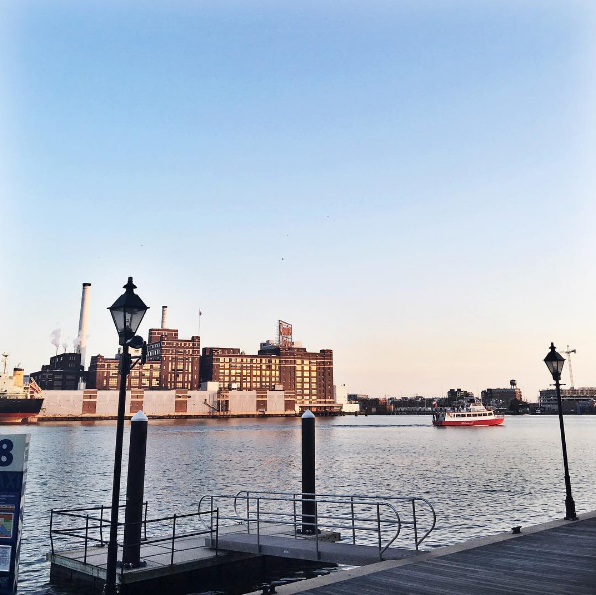 One of the best ways to enjoy Baltimore is a stroll along the harbor to take in the views (and if you’re equipped with a cone from the Fells Point Creamery or an iced coffee from The Daily Grind, that’s even better). Hop in a water taxi to get off your feet and onto the water for a bit and make a stop in Harbor East, a decidely ritzier side of Baltimore. Meander through the streets of upscale shops (Curiosity is a must) and restaurants (Wit and Wisdom is perfect for happy hour on the water), or venture to the more touristy but iconic Inner Harbor, with downtown views and plenty of attractions, including our renowned National Aquarium. 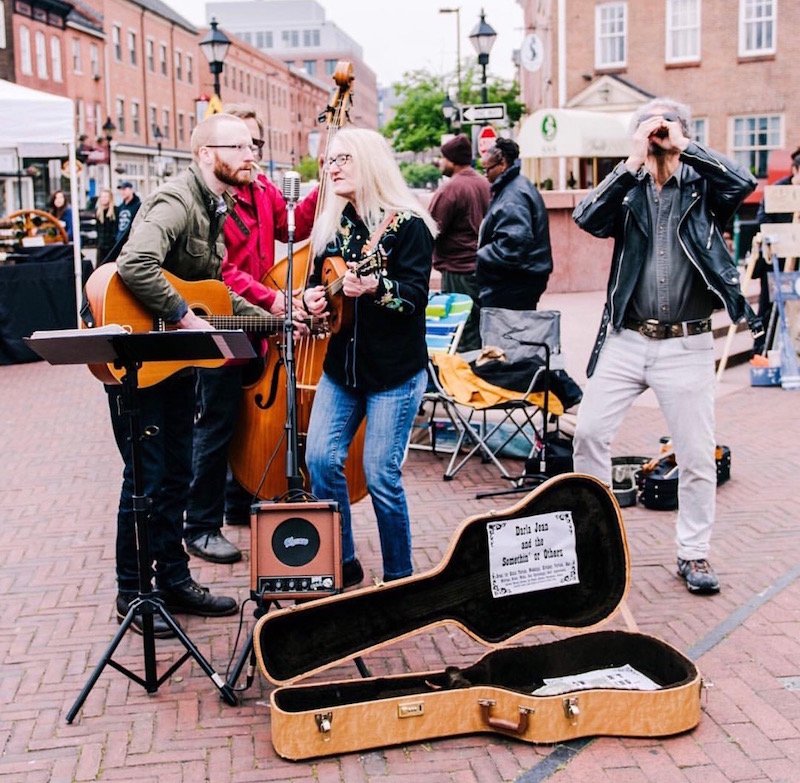 Still, don’t let the pomp and circumstance of Harbor East fool you. In Baltimore, you can come as you are. Fancy wearing your pajamas to brunch? That’s fine, there’ll be someone there wearing something weirder. Feel most comfortable in a dive bar? Great. We’ve got those in spades. No one gets away with a pretentious attitude here. We’re work hard, play hard, so let loose, grab a beer and enjoy the people watching. 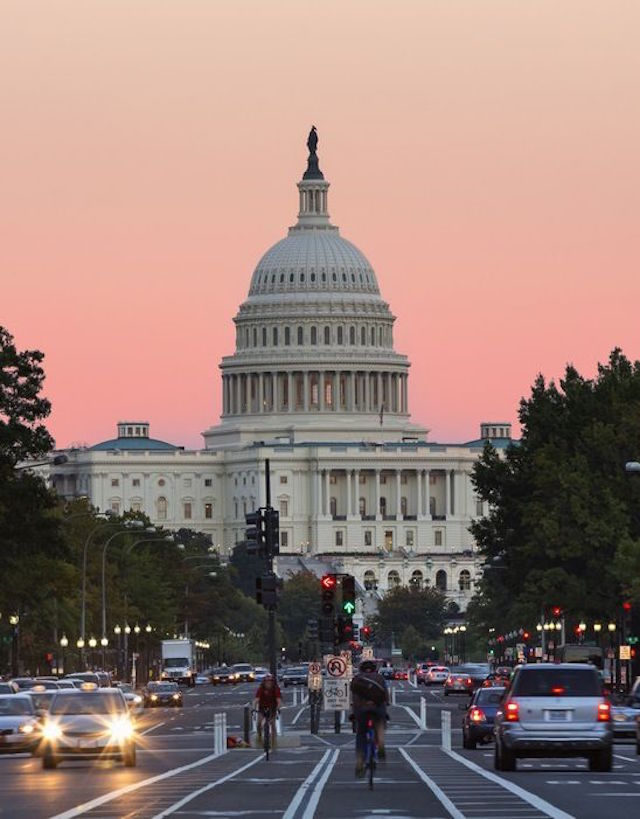 One of the best parts of Baltimore is how convenient it is to other thriving cities in the mid-atlantic. You can hop on the commuter train to Washington D.C. for a mere $8 and only 45 minutes of your time, allowing you to take in all the sights of our nations capitol without the expense of staying there overnight.

Have you ever traveled to Baltimore? Would you? Any other amazing hometowns out there we need to visit? Let us know in the comments below!