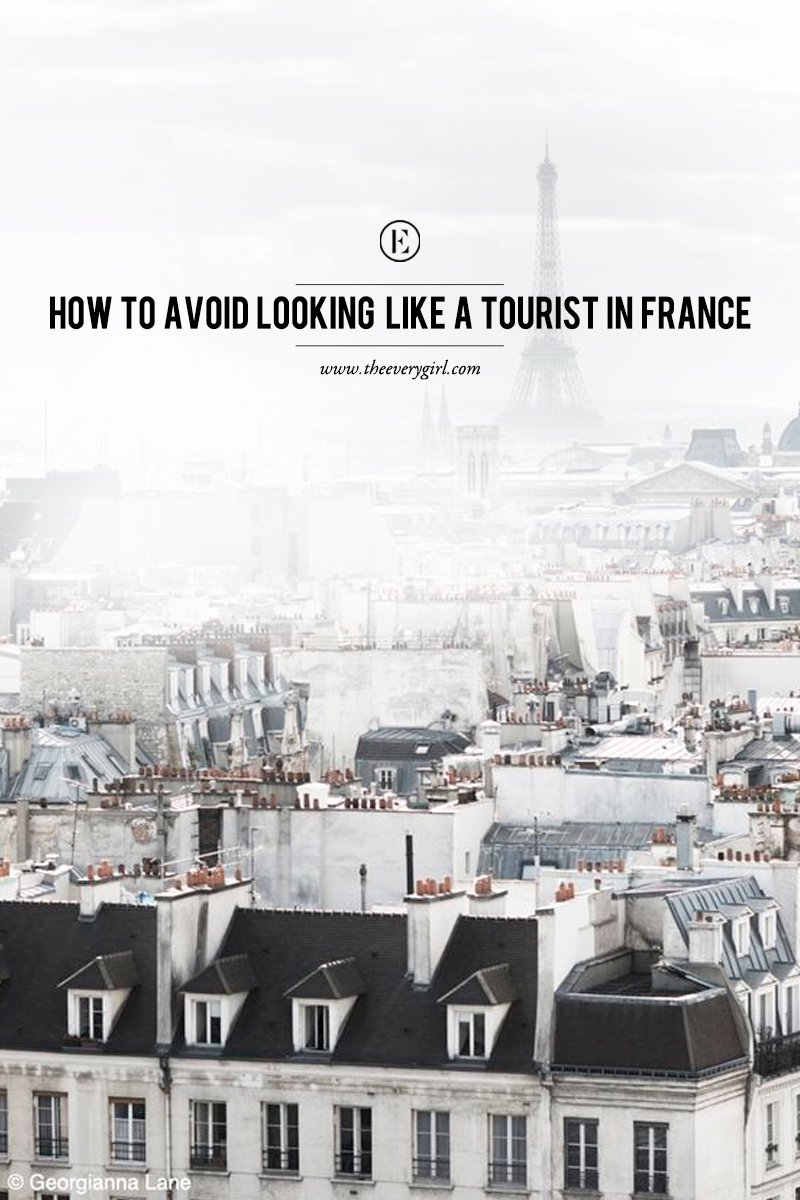 For years, I dreamed of traveling to France. What girl hasn’t? Anyone against indulging in delicious pastries or sipping wine at a cafe while marveling at stunning architecture is no friend of mine.

This year my dreams finally came true and I had the opportunity to venture to the glorious land of macaroons and champagne three times. But before my maiden voyage, I must confess I was a bit nervous. I’d heard dozens of stereotypes about the French and their great disdain for the annoying tendencies of Americans. So I did my homework, held my breath, and exhaled a great sigh of relief immediately upon arrival.

As it turns out, the French are extremely lovely people and I have nothing but wonderful things to say about them. But I also learned a few basic tips could go a long way—helping us all be more well mannered and gracious. If you thinking about going abroad, practice these tips to avoid looking like an inconsiderate tourist.

Don’t let this intimidate you, but try to learn a little of the French language. I’m not suggesting you need to be fluent, but knowing a few basic phrases will carry you far. More than likely, the locals will detect your accent and promptly switch the conversation to English (especially in major cities), but it’s always appreciated when you make an effort. And who can blame them? If someone from Zanzibar walked up to you here in the U.S. jabbering away in Swahili, would you be able to respond? And even if you could, you’re still likely to be thrown off a little. Download an app (like Duolingo) full of all the basics you will need (greetings, general questions, directions, etc.).

Bonus Tip: If you have any dietary restrictions, learn how to explain these clearly. For example, I eat seafood but not meat, so I made sure I could say: “Je ne mange pas de viande. Je mange des fruits de mer. Qu’est ce que tu recommends?”

French women embody an effortless vibe from head to toe, starting with their beautifully bare faces. Here in the U.S., we’ve become somewhat of a “cover it up” society: concealers, foundation, powders, contouring, highlighters, blush… the list goes on. But the common routine in France? An impeccable skincare regimen. The more I noticed the fresh-faced women during my stay, the more I eased up on my own makeup routine with a simple coat of mascara and the occasional a red lip only.

No makeup not your thing? A French woman’s laissez-faire look goes far beyond a minimalist makeup routine. Women in France own that “I woke up like this” vibe with their beautifully undone hair. For French inspired locks, give your hair dryer and styling tools a break and instead embrace the tousled au natural look. If you want something that feels a little more polished, try a sleek pony for a simple yet pulled together style.

Top off your French beauty basics with an effortlessly chic wardrobe. Once again, less is more. Focus on muted colors and rich textures, staying away from over-the-top prints or embellishments (you can never go wrong with black on black). Try our guide to dressing like a French woman.

It’s a common courtesy to tip 18-20% while dining out in the States, which you don’t need to do in France. So imagine how annoyed a server here would be to receive a dollar or two after an extravagant meal. Similar emotions could apply to not greeting shopkeepers in France. Quite often, they’ll beat you to the punch with an enthusiastic and warm “Bonjour, madame!” but in the off chance they don’t see you come in, make a point to respect the local culture and take the lead by saying hello. And regardless if you purchase anything, offer a smile and “Merci, au revoir!” on your way out.

During my first trip to Paris, I met with a friend of a friend—we’d become acquainted over email. Given the mutual connection and conversation history, I saw this person as a friend so I went in for a hug. Awkward doesn’t even begin to describe the mess of twisted confusion that happened as I tried wrapping my arms around him while he attempted to kiss my cheeks, which is the appropriate greeting in France. Fortunately, he was gracious—although I still felt stupid!

So in the event you’ll be introduced to locals, skip the handshakes and hugs and go for an air kiss on each cheek (with no actual lip contact). Although do your research, because how many air kisses varies depending where you are. If you’re nervous, just lean in a little and they’ll more than likely take care of the rest without hesitation. Once I met other friends and got over my initial awkward hump, it became second nature…even fun!

Bonus Tip: Before going cheek to cheek, remove your hat or sunglasses to eliminate any tricky obstacles!

Appreciating people for their differences and learning about a new culture is one of the most exciting parts of traveling. So even when some of those differences are evident, remember that basic decencies will always work to your advantage: Control the volume of your voice, say please and thank you, and smile. We’re all human beings and kindness can (and will!) move mountains.