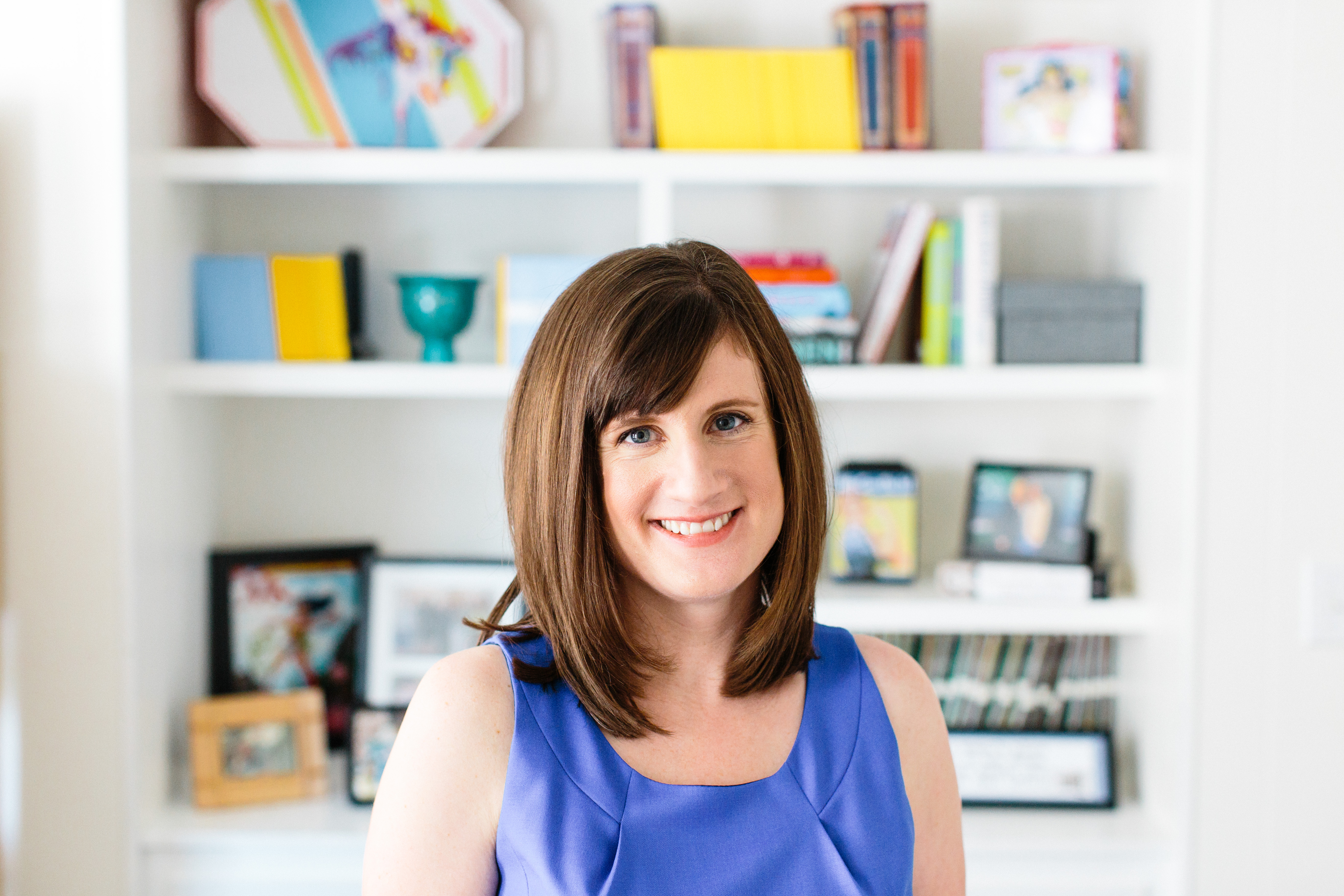 As the executive director for the Barbara Lee Family Foundation, Adrienne Kimmell works to advance women’s equality in American politics and increase women’s representation in the field of contemporary art. These topics are very important to us here at The Everygirl, and we have a hunch many of you feel the same way. Despite the fact that we are half of the U.S. population, women make up only 18 percent of Congress. This statistic is staggering, and it is Adrienne’s goal to help close the gap between gender representation in American politics. As Adrienne says, “It is about empowering women to create change. I learned throughout my career that it’s not only the policies in place that matter, but who’s making them. That’s where the change begins.”

Before joining the Barbara Lee Family Foundation team, Adrienne worked in various roles with Planned Parenthood, where she learned about the interplay between politics and policy and what goes into the legislative process in Washington, D.C. It was this real world education that eventually led her to her current position.

Today we’re thrilled to share Adrienne’s story, along with some advice she’s garnered from her years of experience. Keep reading to learn more about Adrienne’s career, her work to advance women’s representation in politics, and what advice she has for other women who also want to make an impact.

What was your first job out of college and how did you land it?
After studying psychology, my first job out of college was at a group home for chronically mentally ill individuals, where I worked for a short stint before going to graduate school. I got the job the old-fashioned way—by mailing in a resume (printed on actual paper!) after seeing an ad in the newspaper.

Next, you earned a Master’s degree in public policy from Tufts University. How did you decide to go back to school?
In my first post-college job, I learned that in order to make real impact, I needed to change existing policies and laws. In other words, focus on the macro, instead of the micro. That led me to graduate school to study public policy.

After graduating from Tufts University, you worked as a grassroots organizer for Planned Parenthood, where you remained for over five years in varying roles. How did you land your first position with the organization? How did your job responsibilities evolve over time?
There seems to be a common thread running through my early jobs—I applied for and landed them the old-fashioned way. I saw the job advertised online  and sent in my resume. In that first job with Planned Parenthood, I learned about on-the-ground organizing and advocacy. Most importantly, I learned the value of paying my dues.

I was the A-word: Ambitious. I was so passionate about the organization and its work that I was willing to put myself out there and apply for new positions as they came up. I didn’t wait to be asked to take on projects or learn a new skill.

I always straddled the space between policy and politics. I went to Washington, D.C. to work for Planned Parenthood’s federal political action committee. I then went on to manage state policy initiatives for the Planned Parenthood Federation of America, designing model laws and policies and developing legislative strategy to advance reproductive justice at the state and local levels.

It is about empowering women to create change. I learned throughout my career that it’s not only the policies in place that matter, but who’s making them. That’s where the change begins.

You returned to Planned Parenthood as the executive director for the Florida Association of Planned Parenthood Affiliates. You worked for the organization for almost eight years, which isn’t a trend we currently see with younger generations in the workforce. How did you benefit from staying with one organization for a substantial period of time? What are a few lessons you learned from these years?
I benefitted by working at all levels of the organization—local, state, and national—and learned the interplay between each of those levels. And perhaps most importantly, I learned the interplay between politics and policy. I also learned that when it comes to policy and laws affecting women, states are often the breeding ground for national policy.

In 2009 you became the executive director for The Barbara Lee Family Foundation where you work to engage women in politics. Tell us about the foundation’s background and how you became interested in their mission!
I knew about Barbara Lee’s legacy as a powerhouse for women in politics. Barbara’s mission really resonates with me, because it is about empowering women to create change. I learned throughout my career that it’s not only the policies in place that matter, but who’s making them. That’s where the change begins.

The Barbara Lee Family Foundation advances women’s equality in American politics through unique, nonpartisan research, and strategic partnerships. Our mission is to engage and educate women running for office nationwide. We at the Barbara Lee Family Foundation study women’s races for Governor, on both sides of the aisle, as a centerpiece of our work because being governor is often a pathway to the presidency.

We launched our latest research guidebook and our mobile app this summer. Keys to Elected Office: The Essential Guide for Women offers the most direct, must-know advice we’ve gleaned for women elected officials and candidates running for office. From the personal traits, to actions that convey qualifications and likeability, to bouncing back from mistakes, this nonpartisan guide is a concise look at what it takes for a woman to run and succeed.

My focus has always been on making waves and challenging the status quo to achieve meaningful change, particularly in policy areas where poverty, race, and gender intersect. Now, as the Barbara Lee Family Foundation’s Executive Director, I’m doing my part to change the existing power structure by engaging women in politics. Women are half of the population and only 18 percent of U.S. Congress. With more gender equality in our government, can you imagine the results?

Tell us about your team! How many employees currently work for the Foundation? Describe the office culture.
Our team is small but mighty. Our Foundation team is a committed and passionate group of strategic thinkers—all with a shared mission to empower women in politics. Our founder and president, Barbara Lee, has an infectious focus and positivity, and she leads by example.

I’d sum up our office culture this way: We work hard and get results; we have fun; and we’re kind to each other. We also value inclusivity. We’re all working toward the same goal, and we know our success is so much bigger than ourselves. That is really motivating.

And I’ll share a valuable tip I’ve learned from working in a woman-centric environment: Brain food is a must when you’re tackling the old boys’ club. We celebrate staff birthdays with cupcakes, and the conference table in my office is always stocked with chocolate or Starburst.

What have been the biggest challenges you’ve faced in your career and how were you able to overcome them?
One of the biggest challenges in my career is location. I don’t live in Washington, D.C.—the political hub. And just like working moms everywhere, I’m constantly challenged to find the right balance between the professional and the personal in a field that never stops working. As women, we need to be fair to ourselves and manage our expectations of what’s possible to accomplish in a day. Pair those high expectations with a Type-A personality, and it can be a lethal combination.

Be your own advocate. If you don’t speak up for yourself, no one else will.

What advice do you have for women who want to be involved in public policy and politics?
Be your own advocate. If you don’t speak up for yourself, no one else will. Do your homework. Find out what drives you. Be bold; ask for the responsibilities you want—and fake it until you make it.

Ask yourself: From where do I want to make an impact? Then make that place your bull’s eye. You can start anywhere in the outer rings around the bulls-eye – that’s where you’ll build the skill set to help you meet your goal. But don’t settle there. If your goal is to be the chief of staff in a political office, for example, then learn the skill sets in the outer rings as you work your way to that bull’s eye: learn how to draft and analyze legislation; learn about communications strategy and media relations; master constituent services so you know what you’ll be asking of other staff.

What is a typical work day like for you?
No day is exactly the same as the last, but a typical day is always packed with meetings, strategizing, and decision-making. It looks something like this:

Best moment of your career so far?
The best moment of my career so far was seeing a win for women happening in real time. I was the Executive Director of the Florida Association of Planned Parenthood Affiliates, and I watched the extremely conservative Florida State Senate debate a bill that would require ultrasounds prior to abortions. I was on the edge of my seat—and the bill was killed by a tie vote.

It was such a huge effort in terms of legislative strategy and organizing. What a thrilling moment to know we outmaneuvered the bill’s supporters who were trying to limit women’s rights. Because of the work helping defeat that bill, women would not need to go through invasive, unnecessary ultrasounds in order to make decisions about their own healthcare.

What advice would you give to your 23-year-old self?
I would tell my 23-year-old self that no, you’re not yet qualified to be an executive director. Education alone is not enough—you need experience. Having earned a Master’s degree at 24, I certainly needed this reminder. Work hard, pay your dues, be ambitious, and you will earn the experience that will take you to the next step.

Adrienne Kimmell is The Everygirl…

Morning or night?
Morning, now that I have two small children.

Best advice you’ve ever received?
Maybe more important than one piece of advice, I’ve been extremely lucky to have a number of women I can call mentors in my professional life. I consider it my professional and personal responsibility to serve as a mentor for other women.

Perfect Sunday?
My perfect Sunday would start with coffee at home, followed by Dim Sum, and playing outside with my family.

If you could have lunch with any woman, who would it be and what would you order?
Besides my own mother and Hillary Clinton, I’d have lunch with my best friend of 32 years, because emails and texts can’t replace one-on-one time with her. I’d order a turkey club in her honor, because she’s the turkey club aficionado.