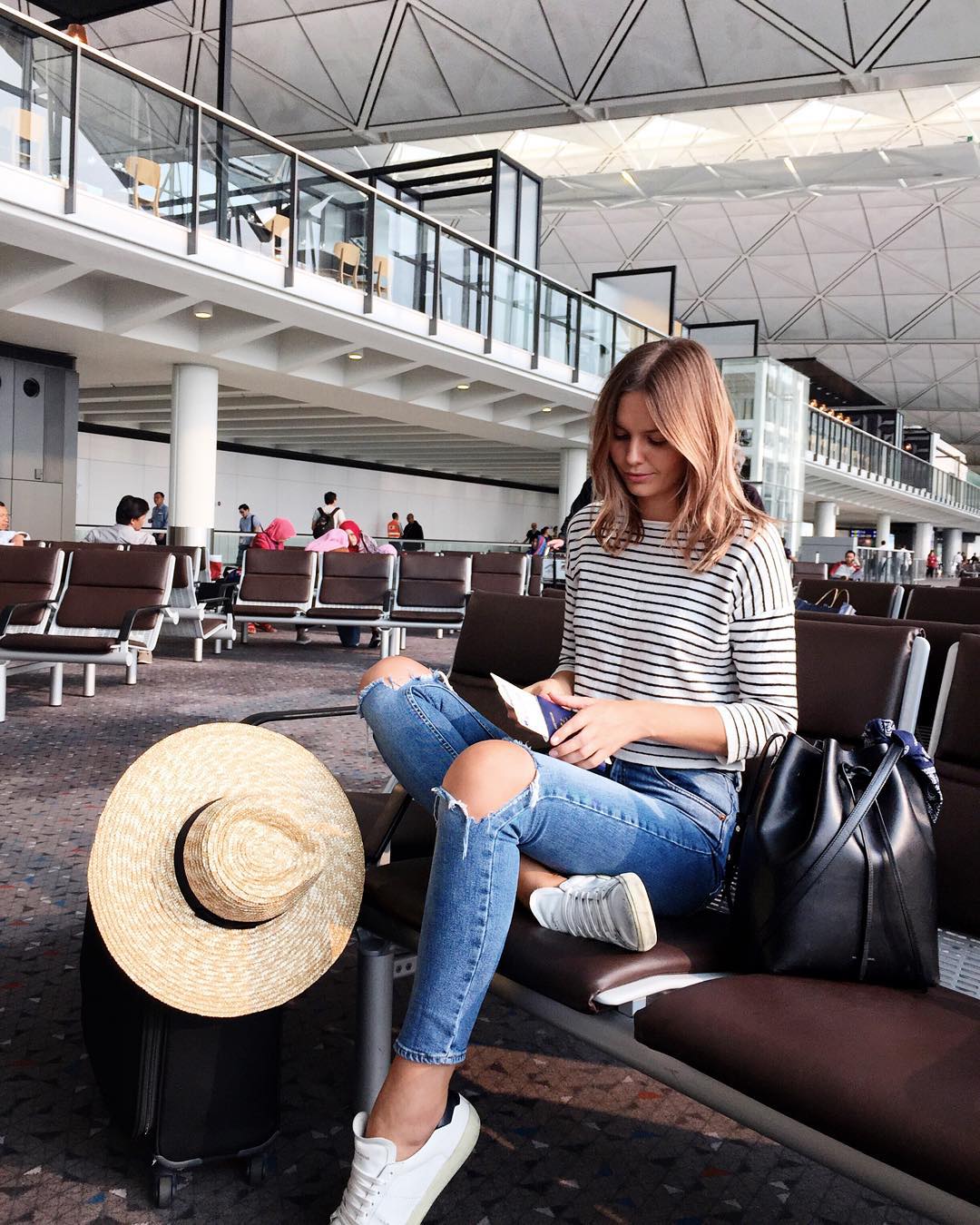 I’m one of those girls who lives to search for airline tickets. My passport might be one of my favorite books. I even got engaged at the baggage claim at LAX.

And yet, I have a dirty little secret.

There. I’ve said it. In one of life’s funnier ironies, I’m the girl who loves traveling, yet hates, hates, hates flying. While my fear isn’t to the extent that I’ll refuse to board—though, I’ll admit, at times I’ve come close—it’s enough of an anxiety that I’ve had to do some serious work on the subject. It doesn’t matter how many times I’ve landed safely (all of them) or how many bumps I think are THE WORST BUMPS EVER HOLY TOLEDO WE’RE GOING DOWN (all of them), I still can’t seem to be that cool girl, that effortless passenger who breezes through the clouds like a bird with a song.

But, I’m learning how to be. And if you, like me, need some reassurance to breathe easy 30,000+ feet up, here are a few nuggets of wisdom that have been slowly easing my mind… and my death-grip on the seat next to me.

The mind is the problem.

Sometimes, I think I’m psychic. As in, I’ve known about pregnancies before they were announced, get premonitions about certain events, and often just know things about people that I should have no business knowing. It’s a weird, awkward party trick at times, but when it comes to flying, this “spidey-sense” is anything but entertaining. I’ve run through worst-case scenarios about planes so many times in my mind that I’ll legitimately think by having a thought, I’m solidifying its happening. Feelings of panic ensue.

It turns out this “confirmatory feeling” is real, but biological. A part of your brain known as the amygdala regulates the release of stress hormones, the same stress hormones that are released when you feel scared, anxious, claustrophobic, or panicky. Normally, the amygdala knows what it’s doing; the rest of your brain has the ability to properly discern if something needs a stress response or not. However, when you’re in an atypical setting and your brain encounters something it isn’t used to (turbulence, a weird noise, an interesting looking passenger you’re sure would play the bad guy in a Liam Neeson movie) the brain can skip logical functioning and kick the amygdala into high gear—especially if your mind has well-worn worry paths of worst-case scenarios already in place.

Do you see how this very normal biological occurrence can be awful for those of us who “get a sense” about things? One unexpected bump or blip on a plane convinces us we need to freak out, and our hormones only make the reality of our fear all the more tangible. But, just like our mind can be our archenemy, it can also be our saving grace in this case. Despite how much of a cliché it sounds, knowledge is power, and by simply acknowledging that our amygdala has perked up really can prevent a stress response from ruining a flight.

No, we’re not getting a premonition of impending doom. We’re uncomfortable, and our brain is doing that thing again. Committing to this thought in our mind can help signal our brain to switch off the amygdala, stress hormones stop being released, and we can go back to that episode of New Girl in peace.

There are a lot of us up here.

Ok, ok. We all know those facts about the safety of plane travel vs. car travel, etc. But that does very little to help “psychic” me when I’ve already convinced myself I’m that one-in-a-million-or-billion-or-whatever-the-statistic-is flight.

What does help me? Visualizing just how many other people are up in the air at the exact same moment that I am. When you’re stuck in that constant hum of a metal tube that is your own flight, it’s easy to think you’re just floating up there, isolated and all alone (in a man-made marvel of a machine, no less). But that isn’t true. At any given time there are around 5,000 other planes en route to a destination in the United States. Don’t believe me? Check it out, here. It’s only after seeing all those other little yellow planes that I started to understand the beauty of that one-in-a-million statistic.

If there are THAT many planes in the sky and they ALL land safely EVERYDAY, I’m not setting any records by being up here. I think I can do this. You can, too.

Turbulence, for real, is normal.

Ever stick your hand out of a car window while it’s going really fast? Does it stay in a straight line? Of course not. Sometimes it gets pushed back; sometimes it dips low, other times it jostles up and down. While this is far from being a scientific explanation, this little visual helps normalize the fact that if my own hand can’t sail smoothly while going 70mph through the air, why should I expect a giant plane going 250mph to? When encountering bumps up above, I throw it back to a summer’s drive and picture my arm dangling carefree in the breeze, reciting “this too shall pass.”

For the science behind turbulence, I found this four-minute video to be extremely helpful. Not only is the British accent soothing, but the narrator also explains in simple terms why turbulence happens and at which points during a flight to expect it. Additionally, this video (again, narrated in that calming accent) helps to show how small of a concern turbulence is to those in the cockpit. This knowledge can calm down that pesky amygdala when you’re riding clueless and antsy in the back row of a bumpy plane. What’s going on up there!? Chances are, absolutely nothing.

Lastly, one final trick I have up my sleeve to conquer a flight like a less-anxious pro is to notice the pros. The flight attendants. They do this everyday. This is their job: To hang out in the clouds, serve Diet Cokes, and run up and down the aisles like champs. I wish I could be one. To me, they epitomize cool, calm, and collected and just knowing there are men and women out there (up there?) that aren’t phased by flying puts me at ease to put my fear in its place.

After all, I got places to go. Don’t we all?