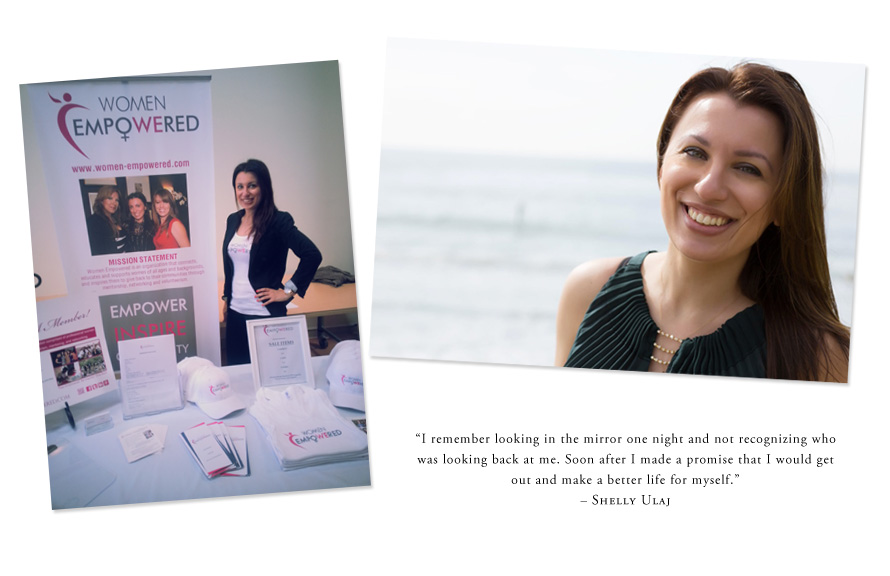 My story starts the moment I got down on my knees and prayed to God to make me into a boy—I was about seven years old. At a young age, the difference in treatment between my brothers and I was very apparent. I grew up in New York in a first generation traditional Albanian home where English was my second language, and upholding the traditions of our culture was of the utmost importance. It’s engrained in us to always think of others before we think for ourselves. Loyalty and hospitality are two core values in the Albanian lifestyle. They’re admirable, but to what cost? Girls in the Albanian culture are held to a stricter standard as far as keeping up the image of the family name and reputation.

As a young girl, I never felt like I had a voice. I was extremely shy and reserved on the outside but screaming in the inside. I used to dance when no one was watching, practice my runway walk when no one was home (I was obsessed with Kate Moss), but in the public I felt pressured to keep up a quiet girl image. I struggled with the Albanian vs. American complex starting around the age of 12. The American life seemed so unattainable, but I was hopeful. Naturally, I’m a dreamer which can get me in trouble sometimes, and I think I created a “fantasy world” for myself to survive.

My older brothers, on the other hand, had much more freedom. They were allowed to participate in extracurricular activities and sports and have friendships outside of family. I, on the other hand, was not allowed to leave the house without a family member, and if that family member was male, he must be a first cousin, otherwise people may presume that I had a boyfriend—something forbidden in our culture. Having a boyfriend as a teenager was viewed as the biggest sin for a teenage Albanian girl.

I learned how to cook at the age of 12 and was responsible for cooking dinner each night for my father and older brothers while my mother worked nights as a cleaning lady on Wall Street. My father worked as a painter. Neither of my parents finished elementary school yet they instilled the value of education in our family. However, for me a college education was only attainable if my future husband “allowed” it. The sky was the limit for my older brothers. I would be considered lucky if I married a man who allowed me to go to college.

Fast forward to the age of 17, I married an Albanian man ten years my senior and moved to live with him in Los Angeles. We did not date. He didn’t know my favorite color. We didn’t have a song. There was no courtship. Nothing. He saw me at a wedding when I was 16—the age when girls are considered of marrying age. The following week, he sent suitors to ask for my hand in marriage. We waited a month until giving an answer, and the first time I spoke to him was after we said “yes.” He ended our first phone call with “I love you.” I drew blank and responded, “Ok, good night.” My marriage wasn’t “arranged” in the traditional sense, however it was heavily influenced. We both came from very well known and respected families—this apparently is a big deal in our culture. I could’ve said no, but I didn’t. Why? Two reasons: 1. This was my ticket to freedom (or so I thought) and 2. I did not want to disappoint my father.

The marriage lasted for almost 9 years—the first year was good. The second year is when reality hit me (and hit me hard), and again I struggled with this Albanian-American complex. I realized that I was not in love with him; we had nothing in common. He wanted to live the Albanian lifestyle; I did not. It was a painful realization because I did not want to hurt him, however I was hurting myself. I fell into a deep depression, struggled with anorexia, and smoked about a pack of cigarettes a day. Gross I know (I am now smoke-free), but this was my way of coping with the stress of being married to a man I did not love and losing myself in the process. I had no identity. I remember looking in the mirror one night and not recognizing who was looking back at me. Soon after I made a promise that I would get out and make a better life for myself.

Divorce, like dating, was forbidden in the Albanian culture. An enormous amount of fear is instilled in our culture if you are to divorce. I knew I couldn’t stay in the marriage but I just didn’t know how to nor had the courage to leave, however I was persistent in staying true to who I was despite the possible consequences. I finally left in 2007, and when I left, I fled. I felt like a fugitive. I literally got up one morning, packed my bags and cat, and left only a note behind. I was free, finally. For almost my entire life, I felt imprisoned and not allowed to be who I really was, who I wanted to be, my authentic self. That person was lost in the midst of family obligations and expectations. My family was devastated and didn’t understand, as I expected. They tried to pressure me into going back. I stood strong and determined, yet I was trembling inside. I found strength I didn’t know I had, and I started to feel empowered. My voice was finally being heard.

On November 2, 2008, Women Empowered (“WE”) was born. The first meeting was held in Santa Monica at Bread & Porridge. I had eight RSVPs from friends and colleagues. Only three showed up, but it was a success in my book. One person would’ve been a success. Before WE, I felt alone and disconnected from other women as I’d lost three extremely close and important friendships as a result of my divorce. WE initially began as a social support group where monthly meetings consisted of brunch, girls’ night out, hikes, and more—all with the idea to befriend, connect, and support each other. The first year was rough. A few months passed where no one would show up but I kept at it. The turning point was the first year anniversary. I hosted a potluck dinner, and I had twelve women in my one bedroom apartment in the Valley. I thought, “Wow this is huge!” Towards the end of the night, I asked each woman to share what they wanted to get out of the group going forward. One of my friends, Tamara who was also present at the first meeting, suggested that we volunteer at a women’s shelter as a group. A month later, our very first volunteer day was scheduled at the Downtown Women’s Center where we provided manicures and makeup applications for the homeless women at the shelter. I was in disbelief and saw WE in a different light. Not only can we create a network of supportive women, but we can help others in the process. Empowering ourselves while empowering others was the focus for future WE events. WE obtained 501c3 nonprofit status as of December 19, 2010; I’ll never forget that date. It made it more official.

Women Empowered is about having your voice heard, building self-confidence, acknowledging the power within as a woman, and developing one’s self both professionally and personally. It’s about friendships, relationships, networking, self-love, and giving back. WE values women entrepreneurship, mentorship, freedom, individuality, leadership, and education. WE is about embracing your authentic self and listening to your inner voice and having that voice heard, acknowledged, and respected. Just as I did for myself, I want that for others.