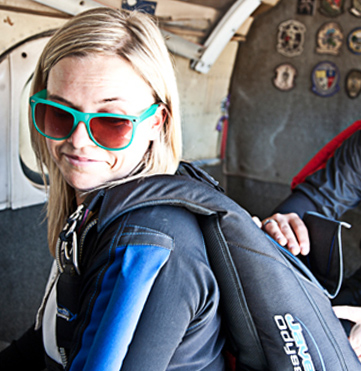 Think of something you’ve done that is totally scary. You know when you’re climbing up the steep hill before the massive drop on a roller coaster? Your stomach is in knots with anticipation, but you’re already in the seat, so there is no turning back. The roller coaster kind of hovers at the top, and then sends you down a hill of adrenaline and oblivion. You get off the ride, and assuming you like roller coasters, you’re elated. You just had the ride of your life.

Did you know you can live life that way? You can take the exact same situation and apply it to some of the biggest dreams you’ve ever had.

My name is Sydney Williams, and I’m an event coordinator and competitive skydiver at Skydive Elsinore in Lake Elsinore, California. Shortly after graduating from USF in Tampa, Florida, I moved up to Chicago for a dream internship at a PR agency. The internship turned into a job, and before I knew it, I was living my dream. I graduated just before every single business realized that Facebook and Twitter were important, and I had a good sense of how to use social media for businesses, and a ridiculous hunger to learn more. The timing was perfect. I had the opportunity to work with some of the best and the brightest in the PR/Marketing industry.

My super-charged career path led me to speak at the SXSW Interactive conference in 2010. I met up with a friend who was a licensed skydiver, also speaking at the event, and he asked if I wanted to join him. We gathered up some other dare devil conference-goers and made our way to Skydive Temple, just outside of Austin. When I landed from that jump, I knew I wanted to make skydiving part of my life. After spending the better part of two years saying “yes” to my career and putting my personal interests aside, choosing to jump out of a plane was the first decision I had made for ME in a long time. I was caught up in the hustle of agency life: tons of emails, meetings and client deadlines. For one minute, from 13,000 feet above the earth, none of that mattered. It was the escape I needed.

I went back to Chicago after the conference and found a skydiving center where I could earn my USPA A-License, allowing me to jump solo. The plan was I could use this license to make my business trips more exciting. I had vacation time that was just waiting to be used, if I could tack on an extra day or two to the business trips, I could see the country in a way that not many people do—jumping out of planes.

Well, the best-laid plans sometimes don’t work out. I got my license, and then I was totally consumed with skydiving. I met a wonderful man (now my husband), and I was helping the skydiving center with their marketing/PR on the side. Once the skydiving season was coming to a close in Illinois, I had moved to Austin for a better job—more money, better weather, all signs were pointing to skydiving more. But I was working more, way more, and skydiving less. So when the owner of the skydiving center in Illinois called me and asked how I was liking things in Austin, I told him about my big, fat dream: “I just want to move back up there and handle your marketing/PR and jump as much as I can.”

And in January, 2011, that’s exactly what I did. I had just over two years experience out of college, a measly 75 jumps to my name (sounds like a lot, but in the world of experienced skydivers, 75 jumps is nothing), and a dream. My parents were concerned that I didn’t have enough experience to be “THE” marketing person at this business. I had some doubts myself, but I wouldn’t know if I didn’t try.

I’m not going to lie to you, that first year outside of the “real world” was tough. I was having a blast, yes, but the environment I was in wasn’t all sparkles, rainbows, and unicorns. I struggled with finding a balance between working and jumping, with keeping the boss happy and keeping myself happy, and more than anything else, I let what the other people around me thought destroy my confidence. It was quite a change from working with people who all know how important marketing is, to being one of the only people who understands it, and trying to convince everyone that we needed to step it up.

When the opportunity to move out west to Skydive Elsinore came up, I had that same feeling in the pit of my stomach—this was a huge decision, a big risk, and I’d be stupid not to pursue it. So we made it happen. The first words out of the owner’s mouth at the interview were “What are your goals, professionally and in the sport, and how can I help you achieve those goals?” It wasn’t “what can you do for me” or “how much is this going to cost me,” but a genuine interest in where I wanted to be in my career as a marketing/PR gal and as a skydiver.

This month I celebrate two years with Skydive Elsinore, and I couldn’t be happier. And I’ve come to love that pit in my stomach that comes with making a really big, scary decision. I left everything behind that society told me was “normal” and “stable”—employer-provided insurance, an cushy office job, promise of career advancement, and a fancy apartment in the big city. Honestly, since doing so, I’ve been redefining my version of “normal” and “stable,” and I gotta say, I like my definitions much more than what society had prescribed for me.

So the next time you have that knot in your stomach as you face a big decision—embrace it. That feeling, for me at least, signifies that I’m about to be outside of my comfort zone. And that’s where the magic happens.