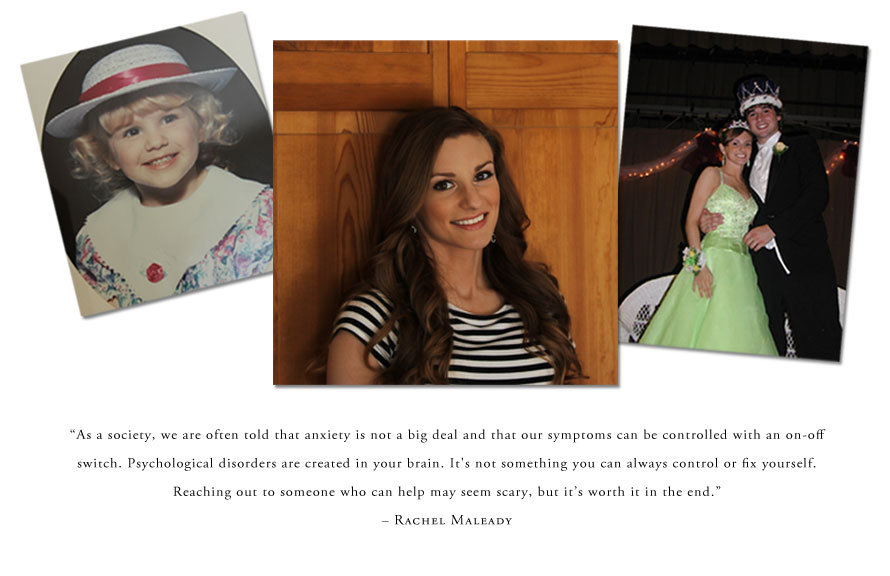 My name is Rachel, and as far back as I can remember I’ve shown signs of anxiety. My earliest memory is in elementary school, when I would get a nervous stomach each day in the cafeteria. In high school, the same thing happened before big events, like a school dance. While I was a happy child and teen throughout those years, I now realize that those small events may have been my first anxious experiences.

In college, I assumed my anxiety was just from the transition. I attributed my depressed thoughts, nervousness in social situations, newfound irritability, and constant worrying to a variety of factors. Being far away from home, staying in a rocky long-distance relationship, and feeling awkward in a sea of people who I didn’t know all seemed like a good reason for my new found anxiety.

As I got further into my college career, I started to realize that these feelings and thoughts weren’t going away. Although I had lots of friends and did well in school, I still felt unhappy and anxious constantly. I knew something was wrong, so I saw a social worker that my college offered through the health services. I met with her on and off throughout my four years, but the problem was never really “solved.” I’d go through periods where I convinced myself I was fine and just overreacting, but then there were times when I didn’t even want to wake up in the morning. It was a constant game of back-and-forth.

College came and went, and a few months after graduation, I landed my first “real” job at a small company near my hometown. After a few months of working, in addition to all of the post-college crises 20-somethings face, my anxiety and depression came back full-force. However, this time it wasn’t like the others.

I would dread going to sleep each night, knowing I had to wake up the next morning. During work, my hands would shake, and my heart would beat fast. I became hyper-aware of everything around me, was always on edge, and couldn’t concentrate on any of my work. It was unlike anything I had ever felt before. Outside of work, I declined invitations to see my friends, rarely wanted to be seen in public, and ended up losing a significant amount of weight in just a few months. I was always in an irritable mood, felt unhappy with everything in my life, and considered myself worthless. The fact that my anxiety and depression were interfering with my work, relationships and, most importantly, my physical health, was a big deal. I knew I needed to do something about it.

So one night after work, I grew the courage to go to see someone. Not just a social worker but a real doctor who could diagnose and treat me. I traveled to the clinic alone, met with a doctor, and came out with a prescription and recommendations for therapists. Although it would take months for the medication to really have an effect, I instantly felt better knowing I had taken the first step.

I had never taken any serious medication prior to this (other than for strep throat, migraines, etc.) I was prescribed Paxil for my anxiety since it’s a widely-used medication with a high success rate. I took it for a month and didn’t feel that much different, so my dosage was raised (which my doctor told me was normal). I was originally prescribed the lowest dosage. I’m a petite girl and had never taken any anti-anxiety medication, so I think starting off with a lower dosage was standard protocol. After raising the dosage, I felt much better. I was very lucky to not have any real side effects or reactions to it.

Upon leaving the doctor’s office, I knew I needed to take time to myself to improve my health, so I spoke to my boss about my situation. I felt like such a pathetic person, but he understood and let me work from home for a few weeks to get healthy. I am so grateful for that.

Here I am now, many months later. I’m back at work and feeling much better. Anxiety is something I still battle daily, but the medicine has definitely improved my workday, relationships, and health. I know it’s something I’ll probably struggle with for a while, but taking those small initial steps has changed my life and outlook. I see my doctor every three months for a check-up. He says that we can eventually try to wean me off of the medication, since sometimes people begin to feel better after an extended period of time.

My advice to other girls who are feeling or showing symptoms of anxiety is not to sweep them under the rug. As a society, we are often told that anxiety is not a big deal and that our symptoms can be controlled with an on-off switch. People tried to convince me that what I felt wasn’t a big deal, so for years I put off seeing a real doctor. Psychological disorders are created in your brain. It’s not something you can always control or fix yourself. Reaching out to someone who can help may seem scary, but it’s worth it in the end.

I look back on the personal struggles I’ve had and wonder how differently things may have been had I sought professional treatment sooner. I kick myself for all those moments, events, and years that I wasn’t truly happy with myself and my life. Knowing that so many other girls go through this every day breaks my heart. You deserve to live a happy, worry-free life, too.