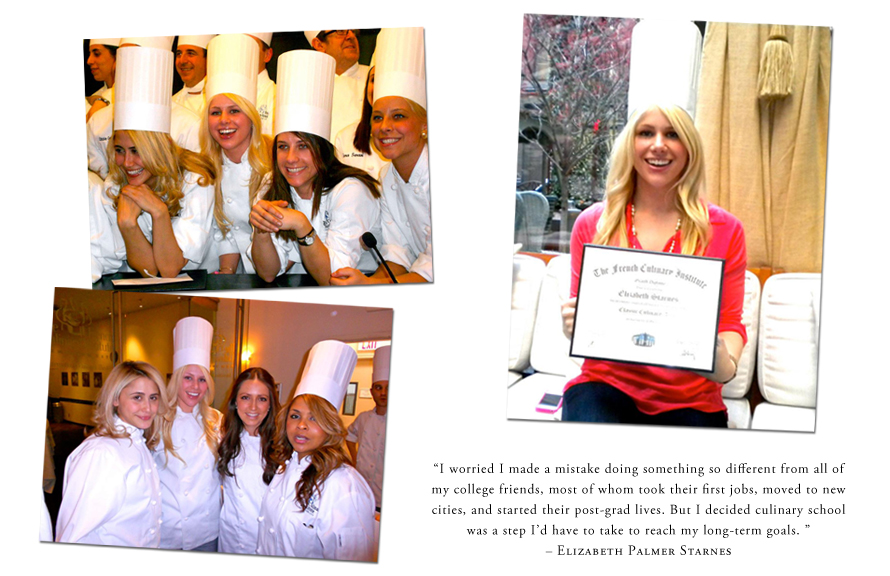 Cooking is my favorite way to bring friends and family together. It’s been a part of my life since the days when I needed the help of my dad and a chair to reach the kitchen sink. Early lessons on weekend mornings turned into full weekends built around cooking. When my parents divorced, I spent most weekends solo with my dad, and cooking became our common denominator. Those weekends filled with grocery shopping, pouring over cookbooks, and countless delicious and involved meals laid the foundation for my love of cooking. For me, there’s no better place than the kitchen and nothing more enjoyable than gathering everyone at the table to try something delicious. That’s why I started cooking, and why I’ve chosen to build my life around it.

After studying history and art history at Hamilton College, with a brief stint traveling and studying at Stockholm University in Sweden, I decided to pursue my culinary dreams and attend the French Culinary Institute in NYC. Talk about a leap of faith! The people I met there and the experiences I had, both in and out of the kitchen, only solidified my passion for cooking (and eating!). Culinary school was a fantastic experience that I wouldn’t trade for the world; but it didn’t come without its own set of obstacles and challenges.

I chose The French Culinary Institute (now known as the International Culinary Center) for a few reasons. I fell in love with my tour guide and brought everyone in my family back for subsequent tours of the school. The energy was contagious, and I could picture myself there very easily. The SoHo, NYC location also appealed to me, and the six-month length of the program sealed the deal. I’d just spent four years in college, and wanted an expedited program that would get me out into the job market quickly. I picked the classic culinary arts program because it offered the broadest and fullest range of culinary knowledge and skills. I wanted a well-rounded education that would serve me well wherever I ended up.

I interviewed with the admissions department, filled out my application, and crossed my fingers. I worried I made a mistake doing something so different from all of my college friends, most of whom took their first jobs, moved to new cities, and started their post-grad lives. But I decided culinary school was a step I’d have to take to reach my long-term goals. When September came, I suited up in my new chef’s whites, packed up my new knife kit, and worried I had no idea what I’d gotten myself into.

From a purely shallow perspective, culinary school took some serious adjustment. I traded skinny jeans for checkered drawstring pajama pants and cashmere sweaters for a starched white chef’s coat and neckerchief.  Long hair got tied and tucked up into a supremely unflattering beanie and makeup became an entirely futile effort; no match for the sweat brought on by our frenetic pace and 18 industrial stoves in high gear. My nail polish and jewelry gathered dust at home—not part of the culinary school uniform. Combine all this with seven-hour days spent entirely on your feet and the usual challenges of a new experience, and I was ready to throw in the towel after my first week.

Since giving up wasn’t an option, I dug in and braced myself for a fight. Slowly and steadily, I fell in love with everything about culinary school and the challenges gradually dissipated. The friends I made helped the transition tremendously. Culinary school puts friendships on the fast track; acquaintances become old friends at lightning speed. You need people to lean on, and it’s such a bizarre setting that you just have to laugh.

The kitchen in culinary school is the most disciplined, regimented, and strict environment I’ve ever been in.  We learned to bite our tongues and to not talk back to the chefs; “Yes chef, no chef, thank you chef,” on constant replay.  The discipline and traditions were palpable in the kitchen.  Our chefs wanted us to succeed, but they weren’t going to let us through without a fight, and certainly not without following the rules.  Not accustomed to blatant criticism, I quickly learned to buck up and hold it together. Tears do not belong in the kitchen, even when your chef informs you matter-of-factly that your lovingly prepared lobster sauce tastes like the runoff from a gutter after it rains (true story!). I emerged from culinary school a whole lot tougher, with a thicker skin and the ability to take criticism in stride.

Like you’d expect, the food in culinary school was outrageous. The sheer abundance of delicious, rich food was overwhelming. Steak, fresh bread, countless creamy sauces, and butter galore, it’s a wonder we didn’t all graduate 50 pounds heavier. Most of us lost the urge to sample and taste everything by the third month or so; you just hit a wall. My exceptions were French fries and béarnaise sauce; those, sadly, never lost their appeal. Despite countless hours of cooking, I still went home wanting to cook more. Knowing that cooking wasn’t something I could tire of solidified my beliefs that this is what I want to do with my life.

The six-month program structured itself around six distinct levels, each with a different focus and a new set of chef instructors. In levels one and two, the chefs babied us and coaxed us out of our shells into a more confident, competent place. Then level three hit us like a brick wall. The chefs sought to break us, shape us, and wear us down with seemingly impossible culinary challenges. I remember frantically whisking hollandaise sauce by hand (we weren’t allowed to use machines) for a failed attempt at eggs benedict that I was required to serve at precisely 12:03 pm. Upon presentation of my dishes, the sauce split, melted all over the plate, and looked generally disgusting. The chefs bluntly informed me of my obvious faults, and I struggled to keep the tears in. Thankfully I had found an incredible group of friends by this point, and we all talked each other off the ledge when the days got really tough.

The last two levels, we found ourselves in the school restaurant serving real paying customers. L’Ecole is a popular and respected restaurant, and we worked hard to rise to the occasion. When the time came for final exams, we all crammed twenty recipes into our heads, pulled three randomly out of a hat, and hit the kitchen floor running. We were required to present four plates of each dish at precisely timed intervals to a panel of judges: local chefs, restaurateurs, and alumni. So overcome with nerves, I promptly cut a huge gash into my finger with my freshly sharpened knife. Without hesitation, my classmates rallied to make sure I was okay. That solidarity meant the world to me.

On graduation day, the women in my class arrived decked out to the nines. We all seemed to want to prove that we were feminine under all those layers of starched fabric and sweat. Blowouts, makeup, and high heels were out in full force and our chefs looked visibly baffled by our transformations. After all the hard work, cut fingers, burns, broken sauces and hours of studying, our confidence and sense of accomplishment was undeniable. We traded in our novice beanies for big tall chef’s toques and toasted with lots of champagne.

Culinary school taught me about myself above all else. It taught me my own strength and fortitude; my ability to tough it out and overcome seemingly impossible challenges. It confirmed for me that cooking is my passion, and that I’d be a fool not to pursue it as my career in some capacity. The chance to love what I do every day and make a living off of it is too fantastic to pass up. That’s the dream, right? To turn your passions into profits and build your life on that happy balance. I think culinary school gives me an edge in the competitive world of food writing that I’m working to break into. Those months of hard work set me apart from the growing number of people who love to cook and watch the Food Network religiously.

Currently, I work in the test kitchen and photo studio at Kraft Foods, contribute weekly articles and recipes to a handful of publications, write healthy recipes for two international insurance company publications, and have recently been contracted to develop recipes for Arctic Zero Ice Cream. Getting paid for my writing gives me the most satisfaction; it’s so gratifying to receive positive feedback doing something I’m passionate about. I’m not where I expected myself to be at this point in my life, but I feel like I’m well on my way and pointed in the right direction. Though landing my dream job poses another obstacle to overcome, I’m definitely up for the challenge.