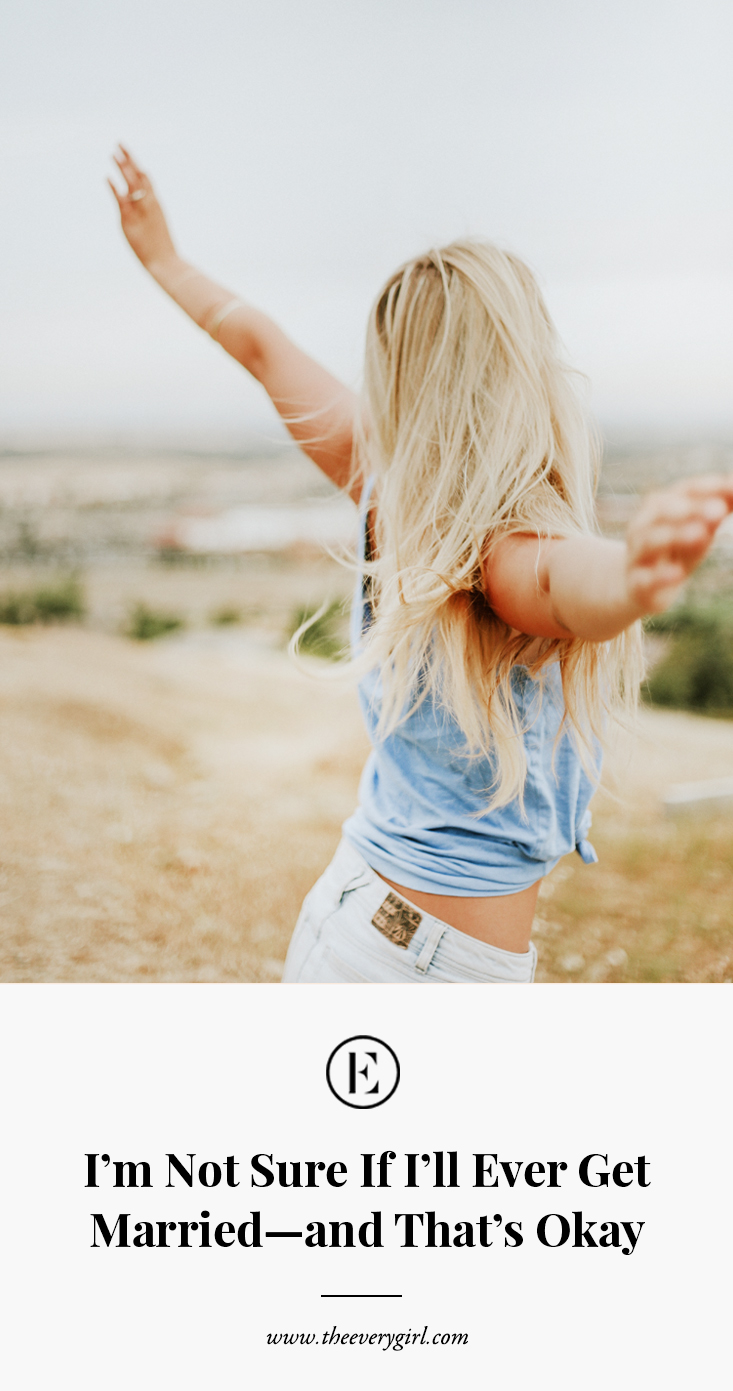 I should start off by saying that this isn’t a melodramatic “I’m going to be single forever!” post. In fact, I’m writing this as a declaration of sorts, a confirmation that feeling uncertain about marriage — whether it’s right for you, whether you want it, and whether it will ultimately happen — is completely and utterly OKAY.

But I didn’t always know that, and I didn’t always feel this way. Like a lot of young girls, I grew up assuming that (of course!) I would be married one day — it was just a step in life that I would eventually reach when the time was right. Fast-forward to my late 20s, and I finally started seeing the cracks in the assumption I’d held onto for so long. I’d hit the age where it seems like everyone around you is getting engaged and walking down the aisle, and where you’re lucky to snag a plus one without a ring on your finger.

And I started to resent the pressure of it all — the pressure to find a husband just so I could join the club of holy matrimony and not feel like I was missing out on a mandatory stage of life alongside my peers. It was this line of thinking that led me to finally ask myself — is this something I actually want? Or just something I think I’m supposed to want? And the answer is that I’m still figuring that out — and in case you’ve missed the theme of this post, figuring things out is also OKAY.

Once I’d realized I wasn’t sure whether marriage was something that made sense for me, I started thinking about the things that enrich my life now, without a partner. To be clear, I realize that some of these are certainly possible within a partnership. But they are parts of my life I’ve come to deeply cherish, things that I don’t see myself willing to compromise or give up for the sake of a marriage. Could that change at some point? Absolutely. But for now, this is where I’m at, and here are a few of the reasons I’m not sure that marriage is in the cards for me.

I have the luxury of being selfish.

As an only child, I grew up with the “selfish and spoiled” stereotype attached to my name. Because of that, I’ve always felt the need to convince others that I wasn’t that person, that I was someone who cared deeply about the needs and feelings of others. I was putting the happiness of others not just before my own, but instead of my own, and ignoring my needs altogether.

Once I reached my late 20s, I embraced the “Single Girl” mentality and really focused on myself. But even in a relationship, putting yourself first doesn’t mean ignoring your partner’s needs. It means prioritizing your own, and giving yourself permission to say “I need more” when the situation is no longer working.

But when it comes to marriage, it’s not always that black and white. There’s typically an understanding that you are vowing to put your partner before yourself, and have committed to making this union work for a lifetime. I have to wonder — can I even make that kind of transition in mindset? Can I willingly sign up for a partnership that isn’t designed for a clean break if things go south? The answer is that I’m not sure. I’ve never been in a relationship that I could see leading to marriage, which is the basis of my uncertainty. It’s tough to know what you’re willing to sacrifice for a person you’ve never met. Maybe one day I’ll reach the point where I “just know” with someone, and none of these questions will matter. Maybe.

I’ve known for the better part of the last decade that children were not on the agenda for my future. It’s not that I don’t like kids or have anything against motherhood — it’s just not for me. For a woman, this decision often triggers a series of frustrating and redundant questions surrounding your lack of interest in childbearing. One of the frequent responses I’ve received after explaining that I don’t want kids is, “Don’t worry; you’ll find someone.” I calmly explain that my decision isn’t an unexpected consequence of not having a partner, but a personal choice that I’ve made after considerable thought.

That said, I understand that my decision to not have children is a dealbreaker for many potential partners. This is something I anticipated from the beginning, bracing myself for the inevitable conversation shortly after meeting someone new. This is often a disappointing but necessary realization that comes with dating in your 30s. If not wanting kids means that I’m narrowing my chances of getting married, I can live with that. Because not getting married is entirely — (say it with me!) OKAY.

I’m still learning about myself.

It goes without saying that I’m nowhere close to the same person that I was in my early 20s, or even five years ago. Continuing to grow and evolve throughout adulthood has shown me that I’m still learning about the person I really am. We’re usually told at some point growing up that you figure out who you are and what you’re meant to do with your life in college, or basically any time in early adulthood. But the reality is, figuring out who you are may be a lifelong process — and that’s okay. I’m not required to know exactly who I am and where my life is going to lead me in the next five years.

But as a woman in my thirties, I’m a heck of a lot closer to figuring it all out than I was at 25. I like this person, the woman I am now, and am grateful for the way she sees the world — something I couldn’t always say for myself. This is also something I appreciate in a partner — someone who embraces their own personal growth and recognizes the benefits of waiting to settle down. So I think in a lot of ways, it makes sense that I’m not in the position to get married right now. And that’s something I’m entirely okay with.

For my fellow single gals, what are your thoughts on marriage? Do you feel pressure to tie the knot? Tell us your thoughts below!