Eight years ago, Jessica Honegger founded Noonday Collection, a fair-trade jewelry company. The company was launched as a way to defray the cost associated with the adoption of her third son, Jack, who was in Rwanda. At the time of the company launch, Jessica was a woman on a mission. “We knew when we made the decision to adopt, it was a costly decision in terms of finances. At the time, when we made the decision, we had a little nest egg because we had been in real estate and the recession hit,” says Jessica. “We were basically paying for our groceries with that fund, and before we knew it, we actually were putting groceries on the credit card. I knew I had to start something on the side in order to get my son home from Rwanda.”

A push and a conversation from her friends living in Uganda helped fuel Jessica’s fire to launch the business we know today as Noonday Collection. “I had some friends that were living in Uganda who said, ‘We have some friends that are local Ugandans and they are extremely talented, and we would love if you could help them out by selling some of their goods in America.’ But at the time, I was working in real estate, we were adopting, and we had two little kids, so I wasn’t really thinking of starting a jewelry business. But when it became clear that our bank account wasn’t going to help to pay for the adoption, I remembered that could be an option.”

Out of financial desperation, and the hunger to adopt her son, Jessica proved that hard work and determination pay off. Since launching the company, Jessica has won Ernst & Young’s Entrepreneur of the Year award, her company was named one of the fastest growing companies in 2015 by Inc. Magazine, she was able to adopt her son Jack, and her new book, Imperfect Courage, documents her path to accomplish it all. The book, which is part memoir and part advice, with sections like “The First Step,” “Better Together,” or “A World Changed,” takes you through Jessica’s journey to be an entrepreneur and makes for a compelling read.

“On my personal journey, I think it takes you on that journey that we take from that inner reckoning when we realize the lies that we tell ourselves, and begin to challenge those narratives. The second part of the book is about how you go on and be vulnerable on your journey, and the third part is about how you apply that to the world and the impact that you can make.”

On the importance of writing this book now, Jessica says “I really do feel like I hold this treasure trove of stories, and it’s my story, and my story is woven into the thousands of people that have been impacted by Noonday. I love the Maya Angelou quote, ‘I come as one, but I stand as ten thousand.’ That’s what I feel like the Noonday story is.”

In our culture, we thrive off success stories — whether we are reading the stories of athletes, celebrities, CEOs, or entrepreneurs like Jessica. These stories make us feel encouraged and let us know that we are on the path to greatness, but we may just have a little more work to do — this is one of the elements that makes Imperfect Courage such a beautiful read. Throughout the book, it almost feels like we are on the journey with Jessica, and although she shows the beauty of her journey, she also shows the hiccups that came throughout the way, the vulnerability she had to show, and the fear she had to work with throughout her journey.

“I turned in an 85,000-word manuscript for a 60,000-word book, so I have no problem telling stories. Stories are how I approach a message. I kind of live life and go with what’s the message in the story — I don’t start with a message first,” says Jessica. “I think for me, the storytelling in the book was just making sure that the stories weren’t random stories, because we pulled a lot of the stories that are in the book — we pretty much told all of them in various forms on our blog or our website.”

Much of the success with Noonday Collection has been the stories of the artisans from around the world whose products are being sold. In the book, Jessica tells some of these stories of people like Addis, Ginny, and Wideleine, just to name a few, that really resonate with consumers, and, in the aspect of her book, readers.

“With this [the book], we wanted to show a message that people could resonate with, and it was really important for me to really share stories in an empowering way to show that we are more alike than we are different. Whether I’m sharing a story with a woman from Ethiopia who has come off the street, or I’m sharing the story of a woman who has two toddlers and is feeling at the end of herself, to show those commonalities — that was really important to me. I think that what’s different when I’m writing this book is that I’m able to weave that message in, in a very cohesive way.”

A theme that runs throughout the book is the idea of community, and how a community is ultimately what you make it. Jessica writes, “If you’re longing to leave a life of safety for a life of risk, meaning, and impact, then please read this carefully: you cannot get there on your own. You — even you — were made for community. To flourish, we must work with, not against, togetherness, and to prize togetherness, we must come out of isolation and be seen.”

This idea, the importance of establishing and cultivating a community, is one of the beautiful themes that shows up throughout the book. In the same way it takes a village to raise a child, the community you grow can help you find sanity, comfort, fuel, and an opportunity to walk out of the isolation that comes with being an entrepreneur. These people could be anyone, but for Jessica it seems to be her family, those who supported her throughout the adoption process, the women she works with, and her friends.

If you’re longing to leave a life of safety for a life of risk, meaning, and impact, then please read this carefully: you cannot get there on your own. You — even you — were made for community. To flourish, we must work with, not against, togetherness, and to prize togetherness, we must come out of isolation and be seen.

“At the beginning, I feel like I had a bit of a hodge-podge, pieced-together community. I was still in my own identity crisis,” says Jessica. “I realized that I need more community and a group of women who were walking through leadership and business growing and I just went out and built that. That’s one of the biggest takeaways that I wanted people to get from the book. Don’t just sit around and wait for this to happen to you. If you want a community of women to be cheering you on in what you are doing, go build it.”

In addition to speaking to community, Jessica continuously shows and prides the idea of cultivating a community of women. Often as women we are told that we are catty or are intimidated by each other,which often is a generalization. Jessica shows the importance of showing up for other women and how it can help to grow something like Noonday Collection or your own venture.

“I started selling homemade goods from Uganda and opened my home for women, and about 80 women showed up. I realized that night that women do want to show up for each other, so I started a business,” says Jessica. “I am really passionate about [women helping women] and I live it in real life.”

Jessica explains that in part, writing this book was a shoutout to women too. “Personally, I just have a true passion to see women rise up and not be paralyzed by perfectionism or be paralyzed by this idea that they are too privileged — all of these things that keep us from engaging with the wider world around us. I really wanted to catalyze courage in women, whatever that means for them. It’s my personal message that I have for the world along with a desire to elevate the brand through storytelling.”

I want people to recognize areas where they might be in paralysis because they are waiting on the perfect time or the perfect adequacies or they’re comparing their beginning to somebody else’s ending, and I want them to become aware of some of the lies that have been told to them about themselves.

Ultimately Jessica’s hope for Imperfect Courage is this: “I want people to recognize areas where they might be in paralysis because they are waiting on the perfect time or the perfect adequacies or they’re comparing their beginning to somebody else’s ending, and I want them to become aware of some of the lies that have been told to them about themselves. I want them to, instead of waiting for their fears to somehow disappear, to make their fear their friend and to actually go scared and to recognize that we are made to have influence and impact on our fear both locally and globally. And I hope that I did that in a way the inspires people and wasn’t like another voice that you’re not enough. I really want people to have that journey of true self-acceptance and self-compassion.” 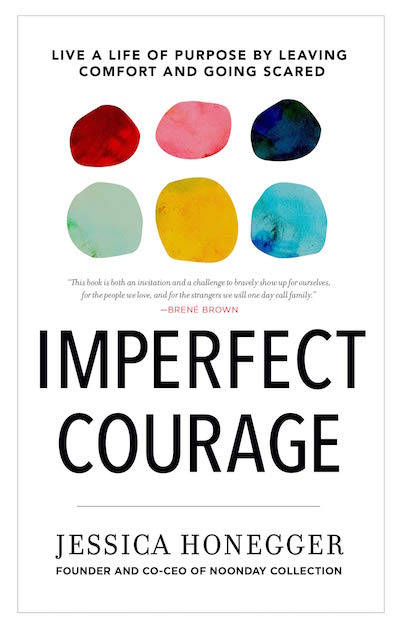