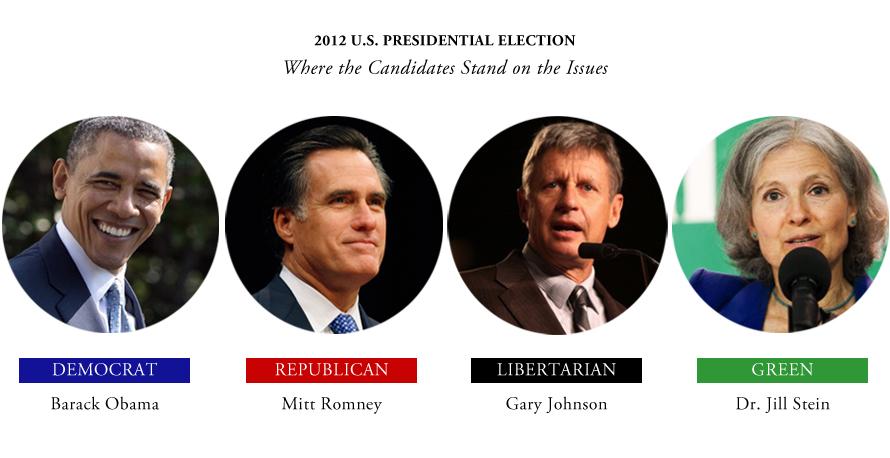 It’s hard to believe there are only 22 days left until Election Day!  Maybe you’re totally over the media coverage and political sparring and ready for the election to be over. Or maybe you’re really enjoying the last few weeks of the campaign and the opportunity to learn more about the candidates.  Now that we’re two debates in, with another debate tonight, many people may already be sure of whom they’re voting for.  For those who are unsure, the last couple debates and informing yourself about the candidates’ positions may be helpful.

Additionally, if you work nights or won’t have the opportunity to catch the debates, keeping up with the latest happenings in the presidential campaign can be tough.  That’s why we’re bringing an at-a-glance look at the candidates’ positions to you.

Now that you’re hopefully registered to vote, here is a profile of the candidates running for president and a brief overview of their positions:

Issues: Below is a brief synopsis of President Obama’s positions on various issues, directly from his campaign.

Issues: Below is a brief synopsis of Mitt Romney’s positions on various issues, directly from his campaign.

While the Green and Libertarian parties’ candidates have not been invited to participate in the presidential debates, we feel it is important to share with you their views, as well.

Issues: Below is a brief synopsis of Gary Johnson’s positions on various issues, directly from his campaign.

Issues: Below is a brief synopsis of Jill Stein’s positions on various issues, directly from her campaign.

While 22 days is certainly close to Election Day, a lot can happen between now and then.  Those in politics and the media refer to a phenomenon known as the “October Surprise” in presidential elections.  While it could be media hype, “October Surprise” is believed to be an event that occurs without notice, and affects the presidential campaign, at least momentarily.  For example, this could be a foreign event that could affect the way voters view President Obama or Mitt Romney and how they handle foreign policy, or it could be something that comes as a surprise from one of the candidates during a debate.  In fact, if you Google “October Surprise” you’ll see much speculation from various media outlets and journalists forecasting what might be this election year’s “surprise.”

We encourage everyone to take the opportunity to inform herself and then take advantage of the right to vote!  If you’re able, we encourage you to watch tonight’s presidential debate.  We’ll be back to re-cap the debate tomorrow.