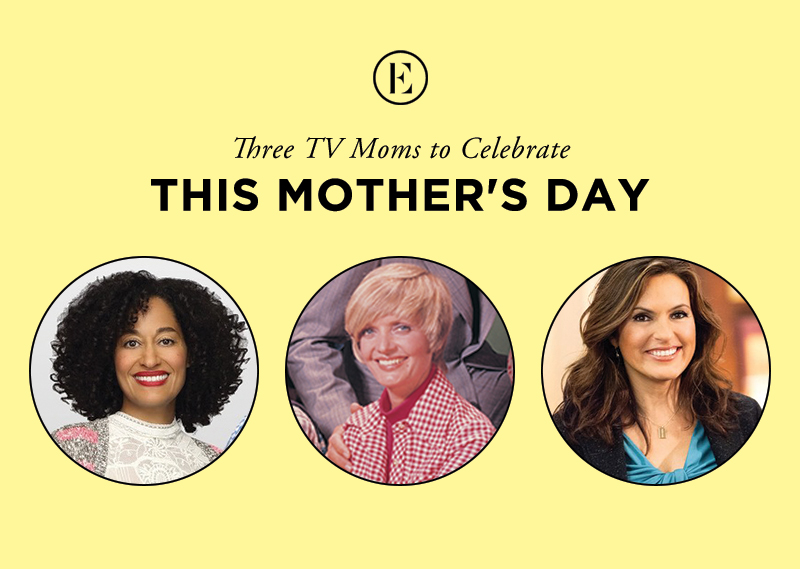 Television shows shouldn’t exactly be considered accurate depictions of real life. Our day-to-day lives are unscripted, unrehearsed, and I would hardly consider my caffeine-fueled workday television worthy. Even so, TV characters are written by real people to represent real people, and the words and actions of the characters we tune in to watch or catch up with on Hulu can represent important ideals of the time. In the early years of television, people used TV shows to escape to an ideal world, but modern day TV viewers prefer their shows (and the characters in them) to be much more realistic.

This is especially true of TV moms. TV moms were once portrayed only as pearl-and-apron wearing domestic goddesses who could solve all of their children’s problems in a single episode and still get dinner on the table. But in today’s world, TV moms are much much more complex. Like our real-life moms, some are traditional, some are loud, and some try a little too hard to be “hip.” Some are married, some aren’t, some have careers, some can’t heat up leftovers without the risk of burning the house down.

Here are three of our favorite TV moms we hope have an excellent Mother’s Day this year. You can stream all of their shows on Hulu and see over and over again just how great they are:

Black-ish is a brand new sitcom on ABC that follows the daily life of the Johnsons, an upper-middle class family in the suburbs. Rainbow (Bow), matriarch of the Johnson clan, is the honest voice of reason within a chaotic household. A successful ER doctor, she logs her hours at the hospital but will still come home with the energy to throw her kids a karaoke-themed birthday party. Bow’s complex in the sense that she can be extremely confident at times (she has no problem telling people about how hard she’s worked to get where she is) but can also be incredibly insecure, which can lead to all sorts of hilarious family hijinks as she tries to keep up with the Jones’.  She is a fierce lover of her children and never hesitates to stand up for them, which is one of the many reasons we hope she’ll adopt us into her fictional family.

2. Carol Brady of The Brady Bunch

Carol: No problem was ever solved by crawling into a hole.

While she still fit comfortably within the mold of “traditional housewife,” Carol Brady was nevertheless a more progressive character than her predecessors. She was younger and more fashionable than other TV moms of the time, though that was hardly what made her character groundbreaking: It’s implied that Carol was television’s first divorcée. Though it was too scandalous (at the time) for the show to admit so directly, and Carol’s pre-Brady marital history was purposely left ambiguous. Carol presided with her husband, Mike, over a blended family; a new concept to TV.

Even in the 1970s, Carol gave her daughters some fairly progressive advice when she told them that “a college education will last a lifetime,” and regularly encouraged her children and step-children to work hard and pursue opportunities. The Bradys might sometime seem like a too perfect bunch, but the show can serve as a fun look back in time. A little nostalgia never hurt anyone, right?

Detective Olivia Benson, the central character in the 16-season-strong Law & Order: Special Victims Unit, shows viewers that motherhood comes in many different forms, some of them untraditional or unexpected. When she suddenly became the foster parent to baby Noah, Olivia had to very quickly adapt to the responsibilities of motherhood. Olivia was promoted to sergeant just as she took custody of Noah, and many of her co-workers disapproved of her decision to become a foster parent. Suddenly faced with the sexist criticism too often given to working mothers who “try to have it all,” Olivia struggled to balance her new personal and professional responsibilities, all while developing a deep maternal love for a child she’d never expected would become hers. After one year of fostering baby Noah, Olivia will have the option of applying for permanent adoption. We won’t know what happens until season 17.

We want to hear from you! Who’s your favorite TV mom and why?

This post is brought to you by Hulu. Watch your favorite shows with Mom this weekend, or go to Hulu for a full list of shows, including Black-ish, The Brady Bunch and Law & Order: SVU.