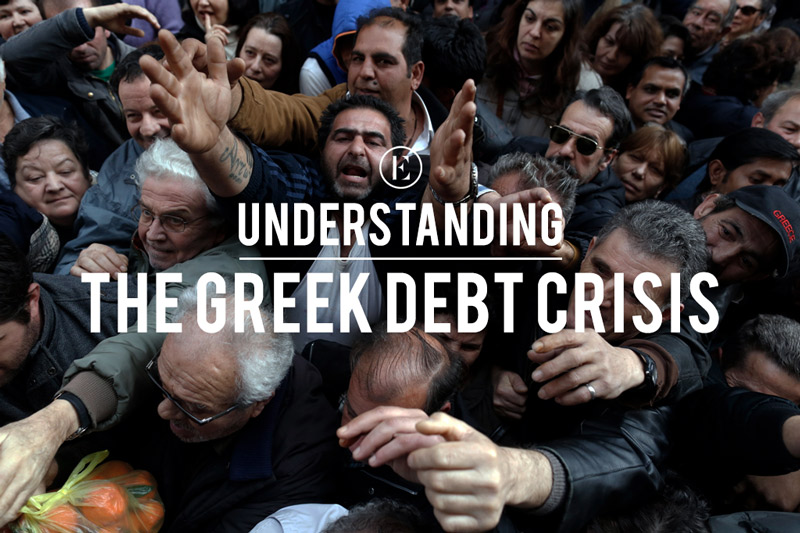 The Greek financial crisis has been a hot button issue as of late. Over the course of the last decade the Mediterranean nation has been in and out of the spotlight as its economy flopped and floundered, leaving over a quarter of its citizens unemployed.

Greece has failed again and again (and again, and again) to pay back its sizable debts and its creditors have run out of patience. This means trouble for Greece AND for the global economy.

This might all still be Greek to you, which is why we’ve put together a guide to help make sense of it all.

Way back in 2001, Greece wanted to jump on the Eurozone train. Trading in Greek drachmas for euros came with all sorts of swanky benefits: stabilized cross-border trade, no more fluctuating exchange rates, and plain old-fashioned bragging rights (to name a few).

Greece may have lied about its financial situation to snag itself an invite to the party. Once it arrived, however, it partied hard.  When the stock market crash of 2008 sent the global economy into a nosedive, it quickly became clear that Greece was operating way beyond its means.

Greece figured out pretty quickly that it needed more cash, so it turned to the troika for help. What the heck is the troika, you ask? It’s a friendly little coalition made up of the European Comission, the International Monetary Fund, and the European Central Bank.

The troika stepped in over the years with a series of bailouts to help keep Greece afloat, on the condition that Greece cut back on fun stuff like spending money it didn’t have. Greek citizens were, understandably, less than pleased with the proposed pension cuts, tax hikes, and austerity measures.

Greece has struggled to pay back the loans from the beginning, but the troika offered them regular extensions when they came up short. That is, until now.

Greece was supposed to repay the IMF 1.6 billion Euro (approximately 1.8 billion USD) on Tuesday. It asked for an extension to the bailout just hours before the deadline hit, to which the IMF replied with a firm “not gonna happen.”

The deadline came and went, and Greece became the first developed nation ever to default to the IMF.

In a public vote on Sunday, Greek citizens decisively rejected new bailout terms, which would have included new behavioral standards and austerity measures. Greek Prime Minister Alexis Tsipras urged Greeks to vote “no,” believing that rejecting the terms would give his administration a stronger mandate to negotiate better terms for Greece. “No one can ignore the message of determination of a people taking its destiny in its own hands,” Tsipras said “Today democracy conquers fear.”

Germany’s chancellor Angela Merkel says it’s up to Greece to decide what to do in wake of the vote.

The government closed Greek banks this week to keep nervous citizens from pulling out all of their money. Most ATMs won’t work at all, but some are allowing for daily withdrawals of 60 euros (about 67 USD).

Greece’s refusal of new bailout terms may force the country to exit to the Eurozone completely. That would mean bye-bye to Euros and hello to a whole new currency, which is something that has literally never happened before in the history of the Eurozone. That sort of uncertainty could easily send investors into a frenzy, causing them to pull their money not only from Greece, but from other fragile economies as well.

The bottom line: We live within a global economy. If one part explodes, the shock waves will be felt everywhere.