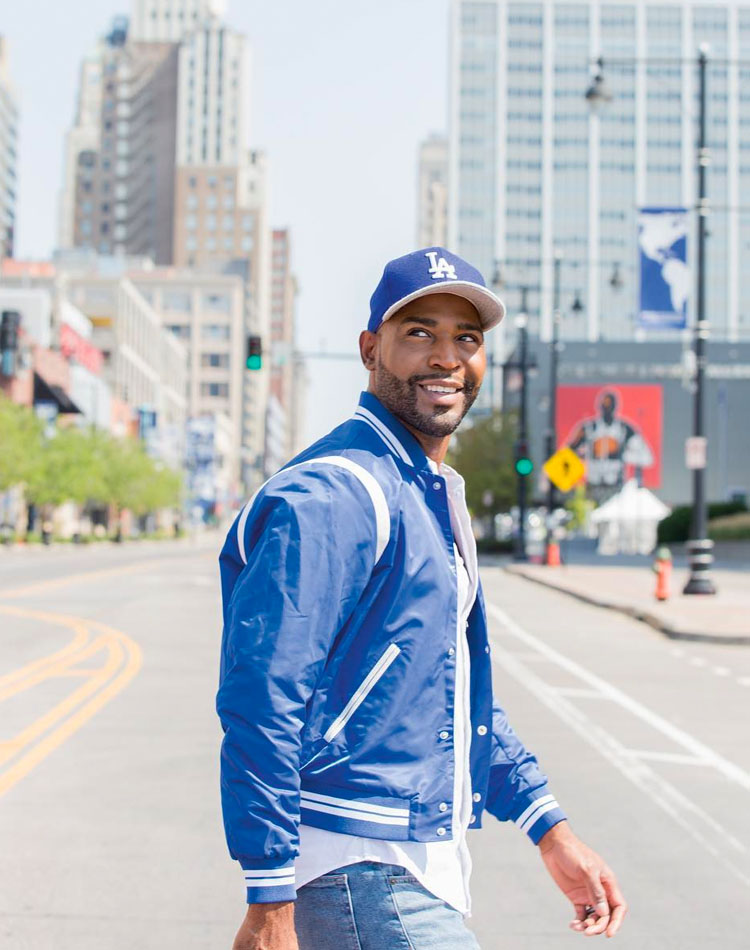 It’s rare that something comes onto the scene of society and unanimously gets praise from its audience. But when something brings true, unmitigated joy, you take it, cherish it, and never let it go—and since the revamp of Queer Eye came onto the scene and did just that, we (like most people we know) have been unwavering fans.

From the second the “You Can’t Fix Ugly” episode premiered, we’ve been able to rely on Queer Eye to bring us joy and a reminder of the good in life, no matter how seemingly ugly other things might get. And the member of the cast that articulates that best? Karamo Brown.

Karamo—who we first saw back in 2004 on Real World: Philadelphia, when he was cast as the first openly-gay Black man on a reality show—is a licensed psychotherapist and social worker and is currently Queer Eye’s Culture Expert. There, his segment of the show is always a tear-jerking look into the episode’s hero’s life and usually involves tackling something most of us have had at one time or another: a lingering, impenetrable sense of self-doubt.

Last Tuesday, Karamo was interviewed on a virtual panel by LinkedIn’s Get Hired Newsletter Editor, Andrew Seaman. The hour-long discussion touched on processing current events, having the courage to be yourself, allyship, and other topics I desperately need guidance on right now—and I’m sure many of you do too. Though most of us will never get our own section of Queer Eye where Karamo gives us advice, this is the next best thing.

” … There is a conversation happening, there are people being motivated and being awoken that weren’t a part of this before. There are people realizing ‘I need to take responsibility for my fellow person and make sure I’m doing my part to protect them’. And when I think about all of that, I think about how inspiring this time is.”

Karamo discussed the importance of knowing when to check out and take care of yourself—especially given the country’s current climate.

“Maintaining mental health is very important,” Karamo said. “African-Americans have been dealing with psychological trauma for generations, and this trauma can make you get numb to the experiences you’re seeing in the world. It’s about really understanding that you need to check out, you need to recharge, and really talk about your feelings.”

On the LGBTQ+ community

This week, the LGBTQ+ community had a long, long-overdue win when the Supreme Court ruled that the Civil Rights Act of 1964 applies to discrimination based on sexual orientation and gender identity. While it was undoubtedly a positive event, Karamo put the ruling into perspective when he explained the triggering aspects of witnessing your human rights being debated.

“For me, right now it’s about helping people take care of their mental health. I love the fact that people are coming together both in Pride and in BLM, and we’re coming together and saying we want to see a better day, but within that, we need to remember it’s triggering for people to see their rights be debated in the courts and to feel less than human,” Karamo said.

“There are people who never had to sit by their TV and wonder if they’re going to be allowed to be fired from their job. “

On being yourself and embracing your identity

When you see Karamo speak on Queer Eye, it feels like he has it all figured out and like an insecurity doesn’t exist within him—but he assured the crowd that that’s far from the truth.

“I’m from an immigrant parent. I also had a child at 16 years old. Most people would say ‘don’t talk about this.’ As I matriculated through life, I’ve come to realize that all parts of my identity are actually the keys to unlocking the doors to my success that I want,” Karamo said. “When I walk into a room, if I can show that my identities have brought expertise and experience that other people may not have, this allows me to be the better candidate.”

He explained that he got the Queer Eye gig because of those identities—not in spite of them. He said when he went to the audition, it felt like everyone else looked the same and said similar things, and “it felt like they all had a script.”

“Think of your identities and the challenges that your identities have brought as a slingshot,” Karamo said. “Every time you feel it’s pulling you back, it’s really a lesson teaching you why your identity is great and how you can use it. And eventually, you may get to a place where there’s so much tension that you just let go and love your identities, and that’s where you soar into greatness, and doors will start opening.”

On making the most of hearing the word “no”

For anyone, getting rejected or hearing a “no” when all we want in the world is to hear “yes,” while a part of life, can be devastating—but, to no one’s surprise, Karamo’s take on it is something we all need to hear.

“When I hear a no, the first thing I say is thank you, and I mean it. Then, I take five minutes and think about what I can learn from that no to get the yes that I want. There’s always a lesson in a no—even when it’s coming from someone who’s being an a-hole.”

On being an ally

The term “ally” can raise questions and confusion of where and how to step up as one—but Karamo emphasized the importance of being an ally, both now and always. One of the easiest ways to do so? By taking the time to educate yourself, rather than relying on the member of the LGBTQ+ community to do it for you. Then, bring it back to them, show them what you learned, and ask where they need you to amplify their voice.

Karamo also doesn’t like the term “coming out,” as he believes it gives power to the receiver of the information, rather than the one who’s giving it.

“I don’t use the term ‘coming out.’ And the reason I don’t use it is because I think it gives power to another person,” Karamo said.

“Also, we’ve been told we’ve all come out of the closet. I don’t know where this closet is. And if I ever found it, I’d want to go in that closet and there better be a pot of gold for all that I’ve been through, and then I’d like to burn that closet down.”

This Pride Month looks different than most, but Karamo assured that that isn’t a bad thing; change is happening.

“The spirit of Pride is empathy, education, and equality. It’s about people saying I want equality, and I deserve equality,” Karamo said. “I mean, just yesterday we saw the courts say ‘we can’t fire you because you’re gay.’ I want people to think about that. That means that this Pride when we’re celebrating we also need to be educating ourselves on where we need to go and have empathy as allies and members of the community.”