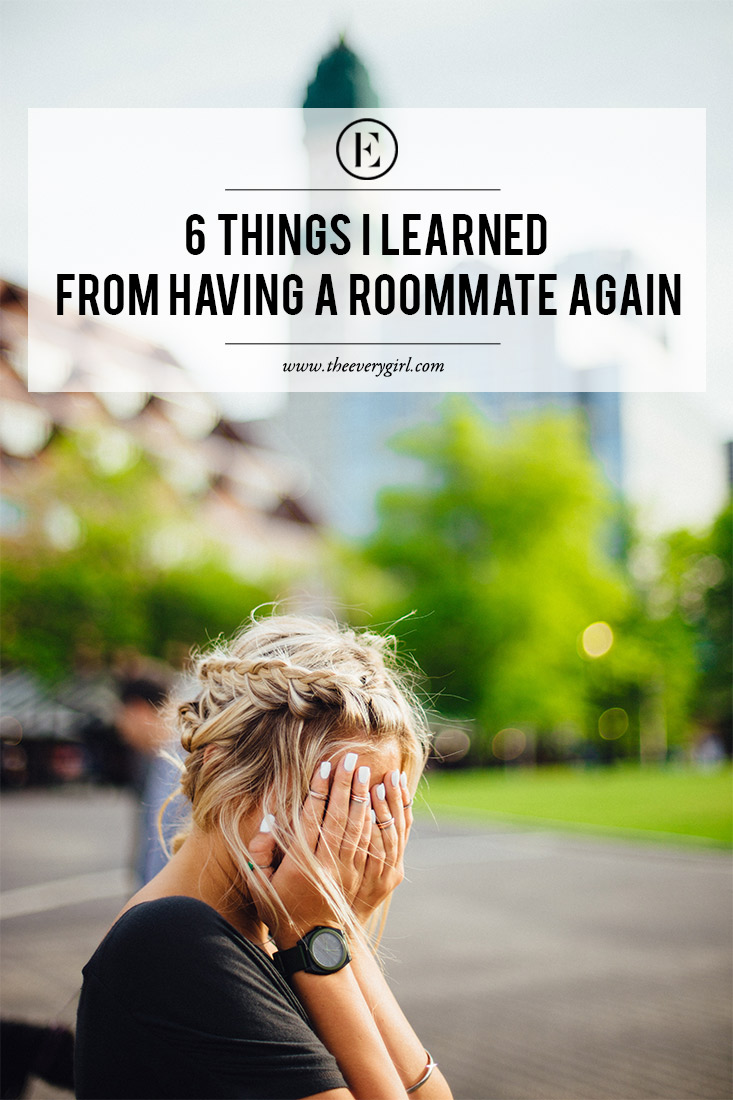 A little over two years ago, I wrote about my experience living alone for the first time. In it, I discussed the lessons learned while living by myself: from the glorious, “living alone” dress code (no pants, no problem) to the new, bad habit of talking to myself. And for about two years (and some change) all of those things held true. I fully embraced my introverted-ness, I enjoyed making meals for myself, and I liked not having to fight over the remote control with someone who likes shows on Bravo. But then, last fall, the unthinkable happened: I got a roommate again.

To be fair, it was my sister, so it feels like it doesn’t fully count, but there was definitely another human under my roof and living in the guest room. Having just moved to Chicago from Manhattan, my sister was bunking up with me for a few months while she nailed down a job and got everything situated. That was eight months ago. So, clearly something is working, right?

OK, here they are:

1. There is a real and intense learning curve.

I think I underestimated the acclimatizing it would take to have someone else around when I was used to it being just me.

Since I am an extreme person (not cliff jumping extreme, just “go big or go home” extreme), I decided to get a puppy a few weeks after my sister moved in with me. So to review, I went from being a pantsless, schedule-less outlaw to suddenly sharing space with another human being for many hours of the day and being at the mercy of a six-pound helpless furball. But puppy aside, I think I underestimated the acclimatizing it would take to have someone else around when I was used to it being just me. To combat my sudden feeling of overwhelm, I took a lot of walks (and yes, this was highly related to the new pup). I also started working more from coffee shops (as opposed to my kitchen table), and purposefully carved out new spaces and times for alone time.

The weeks leading up to Meredith moving here, I spent a lot of time figuring out how to make space for her. I used the guest bedroom as sort of an overflow. Under the bed, in the closet…I kept old books or the air mattress or unhung artwork. Same goes for the bathroom and pantry. At first I was like, “There’s no room. Sorry, ugh!!!” And then I was like, “Grow up, self.” I cranked up some tunes and spent six hours one day—no lie—KonMari-ing the shit out of my house. When I was done I had SO MUCH room for her and I felt free of clutter and nonsense.

Having a roommate after years of living alone really highlights all of the quirks and particulars you have that you didn’t notice before.

Having a roommate after years of living alone really highlights all of the quirks and particulars you have that you maybe didn’t notice.

I realized how annoyed I’d get if the couch pillows were messed up, or if the cupboards weren’t the way I was used to. I was set in my ways and that’s not where the milk goes!

Listen, I know I sound like a maniac, but I think when you live alone you don’t even realize that you like things a certain way because, well, you’re mostly the only one messing things up. I remember an adult once telling me right out of college to never live by myself or I would become impossible to live with some day (I think they were referring to my future husband), and while I don’t agree with that, I do think that a perk of having roommates is a way to observe your habits and work on being more flexible (something that’s good for all of us, duh).

4. Not all roommates are created equal.

My sister Mer is a sommelier and so her work hours are intense. But since I work from home, this ended up being the biggest factor in our success as roomies. She is usually gone for 12-hour chunks at a time, so I still have a ton of the space and freedom and alone time that I had when I lived alone. I would have died one thousand deaths if I lived with someone who also worked from home. Or someone who had friends over all the time (ew, people! Just kidding. Sorta.). But what I’m saying is it is still often pants-optional o’clock and damn it, that’s important to my quality of life.

This, of course, is assuming you’re hang-out pals with your roommate (which I know is not something everyone wants), but an unexpected benefit for me of having a roommate again was the spontaneity and convenience of dashing out for a drink or some other fun activity. It’s also been lovely for my pup to have another person to love on him when I’m not there.

6. Boundaries and communication are important.

Having a roommate again also taught me how to better tap into what I need and how to communicate it. Mer and I have never even had a blowout fight (and we are sisters!) because we’ve done a good job of discussing what’s working and what we both want/need. (Someone tell my future husband that I’m really great to live with now.)

At the end of the day, this is likely just a season. Meredith will eventually want her own spot, and I’ll probably be ready to live alone again soon. But it’s been a really great learning experience and I’m thankful for it. (Note: Written pantsless at the kitchen table, minutes after my sister left for work.)