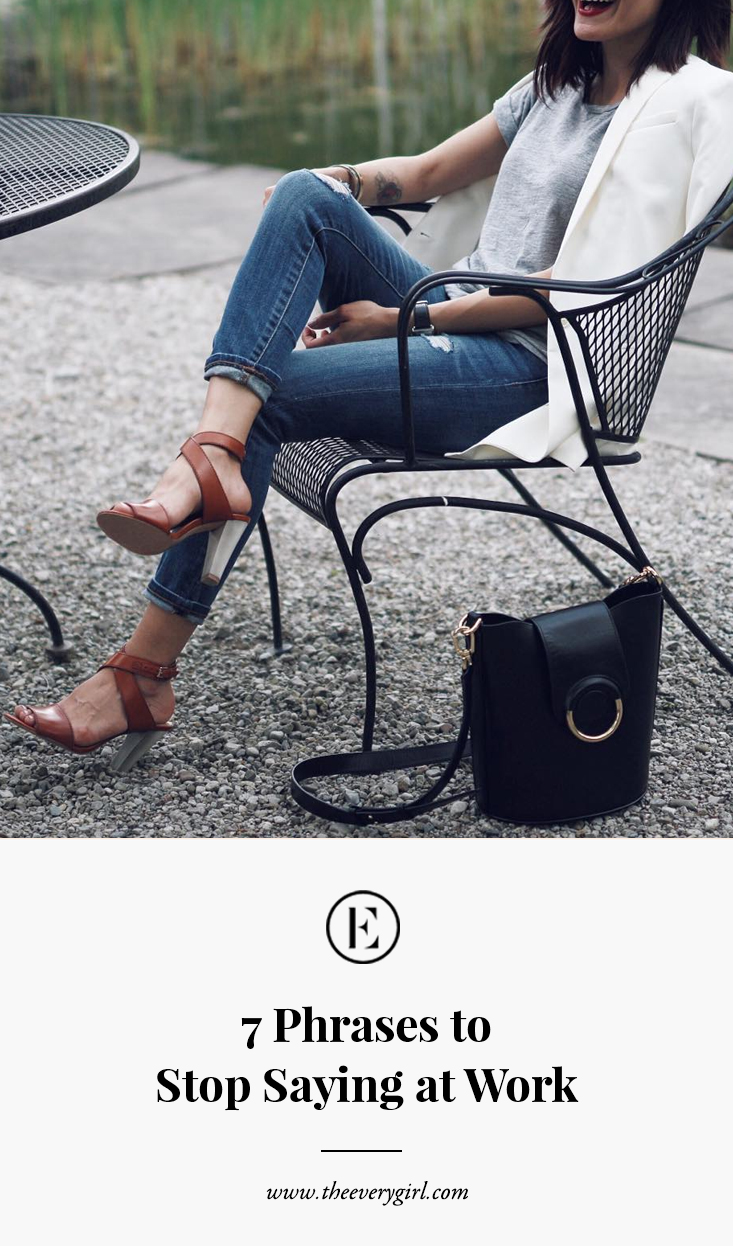 Think of the last presentation you witnessed. How many times did the speaker say “um” and “uh”? If it happened frequently, then it may have affected your ability to retain information or key points—and more importantly, it could have caused you to think less of the person speaking. It sounds harsh, but it’s true: Words have the power to help or hinder both performance and perception, especially in the workplace.

Here are seven common phrases to eliminate from your work vocabulary today, so that you can sound like the confident, competent person you already are:

Saying “let me know!” at the end of an email chain, meeting, or conversation seems like a good idea. It sounds so polite and respectful! Well, yes, but it isn’t helpful. It doesn’t outline next steps or identify action items. It provides no clear direction. And worst of all, it puts the onus on someone else (i.e., not you) to do the work of decision-making in order to prevent stagnation on a solution or project.

In an age of full inboxes and packed schedules and meeting overload, you’ll stand out by taking initiative. Start with the questions at hand: Does a meeting need to be scheduled? Should a call be made? Can a draft be created? What sort of deadline is required? Are there notes or resources to be located? Focus on figuring out what you can do to provide value in the short-term, and then articulate exactly that with as many deadlines and details as possible.

For example, instead of telling your boss, “Let me know if I can help with the budget proposal,” say, “I’ll call Mary today to follow up on the proposal draft so we can meet the budget deadline.”

We’ve all been there: that moment when you say, “I feel like . . .” and sound like a Valley Girl to the nth degree. This phrase is commonly used to frame an idea or viewpoint when we are feeling unsure; we throw it out there as self-protection in light of anticipated criticism. Removing these words from your career lexicon allows you to be taken more seriously, and honestly, it’s more effective.

Imagine telling your boss, “I feel like I should get a raise.” She or he would most likely ask for reasons why you deserve a raise, what you’ve accomplished thus far to validate a raise, what percentage of an increase seems reasonable, and so on. A better approach, then, is to say: “I’d like to be considered for a raise this year, because of X, Y, and Z.”

Cut to the chase and say what you really mean.

I used to reply with an automatic, upbeat “No problem!” when someone said, “Thank you.” I did this for everything from tiny tasks to major milestones, acting like it was no big deal even though I secretly appreciated the show of gratitude for my effort. “Why can’t I just say ‘you’re welcome’?” I finally wondered.

Insert lightbulb moment. For some reason, I thought acknowledging a compliment contrasted with being humble, and that’s simply not true. When you say, “You’re welcome,” you’re actually saying, “Yes, I did that for you!” It feels good to be noticed, recognized, and appreciated; furthermore, it often makes the person thanking you feel warm fuzzies inside, too.

Look at your email and delete all the times you use the word, “just” as a qualifier for what you’re doing or saying. If you’re anything like me, you probably use it a lot without even thinking. “Just” is a qualifying phrase; it sounds respectful, as though you’re deferring to someone smarter or better than you. That may be the case, but it also positions you as a constant subordinate. I found that I used this word when I felt nervous about asking for what I needed or guilty about imposing on someone’s time. And when I paid attention to how often I said “just,” I realized that it served no real purpose.

Consider the difference: “I just wanted to get your opinion” v. “I wanted your opinion.” Which is more clear and confident-sounding? Definitely the latter. Removing “just” from your words strengthens your message as well as makes you sound, and feel, more confident.

Imagine that you’re sitting in a brainstorming meeting, and the perfect idea comes to mind. You wait for an opening in conversation, open your mouth and then…note a bunch of flaws regarding your proposition before you even share what it is in the first place. You start rattling off introductory phrases, such as:

Don’t do this! Most of the time, it’s an attempt to demonstrate humility or lower the expectations of your listener. For me, I sometimes talk this way when I’m feeling a little shy or nervous about whatever I’m trying to articulate. However, if I don’t believe in what I’m saying, why should my audience? There’s no need to defensively outline the flaws of your viewpoint or position before others have even had a chance to hear it. Keep your credibility intact by simply stating your case and letting people react—for better or worse.

A mentor once gave me a fantastic piece of advice: she suggested that I practice pausing, and waiting, after making a recommendation or delivering a presentation. “Practice being quiet?!” I thought at the time. But she was right.

More often than not, after I’m done speaking in a work situation, I hear crickets and panic—Are people confused? What did I miss? Do they hate it? Then, I rush to fill the space with either more talk or questions like, “Does that make sense?” The latter is not helpful. Sure, it’s important to invite feedback and check for clarity, but if someone has an opinion or feels confused about the topic, he or she will probably pipe up. You don’t have to preemptively suggest that you’re not being coherent.

Two words, my friend—GOOGLE IT. I always, always, always Google my question before bringing it to a co-worker or boss. Not only does this save time, but it makes you look smarter because you took the time to gather as many answers as possible on your own.

This tip seems super obvious, and yet, I see it every day: People (myself included!) ask questions that could have been answered with a little digital detective work. Using the Internet to problem-solve (assuming you, ahem, don’t fall down the rabbit hole of cute cat videos) can decrease your list of questions dramatically, which allows you to focus on the areas you really do need team support or guidance.

What words or phrases do you use at work to sound confident? Is there anything you’ve stopped saying, and why?

This article was originally published on July 19, 2016.