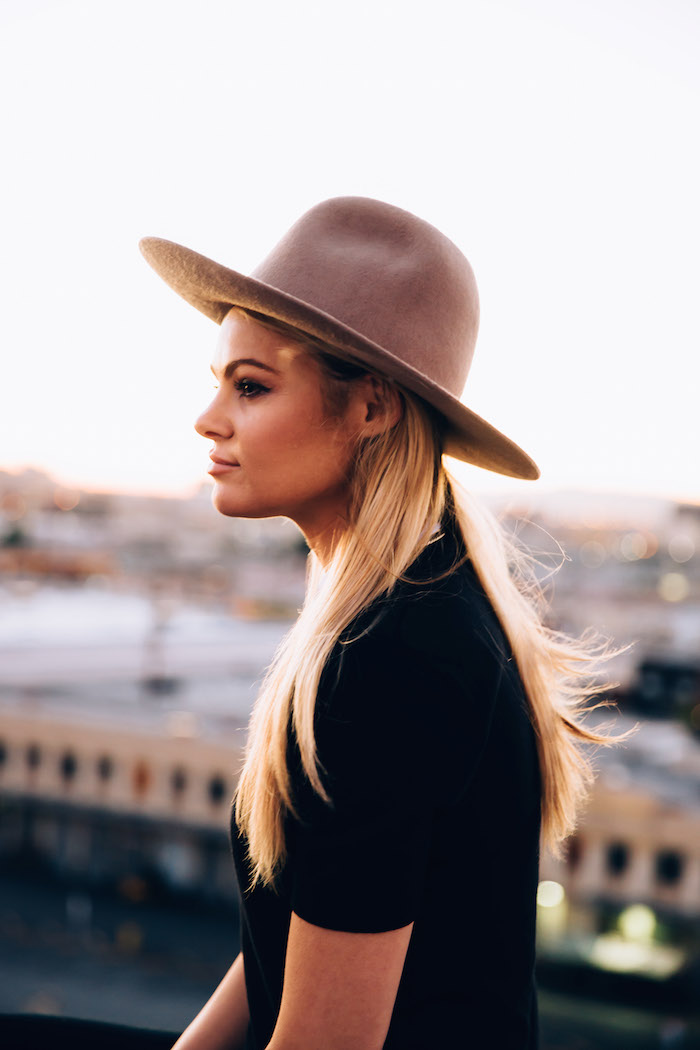 Caitlin Crosby’s career may have started in music, but she found her true calling where she least expected it: in an old New York hotel room key. Caitlin, an actress/singer/songwriter, had the idea to engrave her old hotel room keys with uplifting and inspirational words and wear them as a necklace. As questions and compliments about the necklaces came her way, Caitlin began selling them while on tour.

Wanting to do more than just start a jewelry business, Caitlin realized what her business model lacked when she spotted Rob and Cera on Hollywood Blvd. sitting under an umbrella and holding a sign that said: ugly, broke & hungry. After learning that Cera was a jewelry maker, Caitlin gave them positions with her team. The Giving Keys was born the next day as a business of beautiful jewelry and a path off the streets for the homeless.

Caitlin partnered up with the United Way and PATH (a reputable transitional home in LA) to help build The Giving Key’s team through an in-depth screening process—it ensures that the homeless are ready to transform and transition their lives through a job with The Giving Keys. We love their mission to pay it forward and what Caitlin’s business represents!

Keep reading to know more about how Caitlin took her idea from conception to reality, how she found the right people to partner with, and what comes next as The Giving Keys continues to grow.

You started your career path as a songwriter with Kenny “Babyface” Edmonds when you were still in high school and were later signed to his label. Tell us about that time in your life in the entertainment industry.
I grew up acting from a young age and started writing songs about all the crazy things I saw behind the scenes in that world. Once I signed, a lot of A&R label heads wanted me to write songs about parties, pop culture, fake ID’s, affairs, and subject matters that push the envelope. But I always wanted to write songs that would inspire this generation of girls to help change the world—so there was a lot of conflict and fighting for what I believed in during that season of my life.

You launched the LoveYourFlawz campaign in 2009 before releasing a debut album “Flawz” with Blackledge/Atlantic Records. What was the catalyst and inspiration behind the campaign?
I saw that so many girls (including myself) suffered from low self-esteem because they compared themselves to media images that are impossible to attain. Then I did a film where they airbrushed an entirely different body onto my face for the movie poster, which allowed me see first hand how fake so many of those images are. I was even jealous of my own fake airbrushed body! I also saw many girlfriends placing their value on what guys thought about them.

I wanted all of us to embrace our quirks and so called imperfections because those are the things that make us beautiful. I wanted to change our perspectives to see our ‘Flawz’ as beautiful. It was my own form of therapy. I wanted our value and confidence to come from our character, integrity, and all of our uniqueness. I’m super proud of the The Flawz video (from 2009) that I spend years filming and editing.

The LoveYourFlawz campaign eventually led to your current role as Founder and CEO of The Giving Keys. Tell us about the transition and how the campaign has inspired your current business.
I spent years observing, examining, and analyzing how and why humans are hurting. I always prayed: “God, give me your heart for people.” I believe he answered that prayer and The Giving Keys was the outcome.

Even in my early years writing songs, I always wanted to write about issues people were going through to hopefully encourage them. These observations, along with trying to strategically create a product and movement that would heal people, started while touring for music. We sell different creative products at merchandise tables, which is where The Giving Keys was birthed. I knew people weren’t buying the keys because of the fashion element—they were resonating with the story, message, and mission behind it. Girls needed to be reminded they were one-of-a-kind, just like these keys.

Many potential business owners get stuck when they have to move past the concept to the execution. What was the process of building The Giving Keys from the ground up? What resources guided you during the process?
I started giving away the product from free to anyone and everyone—waiters, Starbucks baristas, celebrities, homeless people, friends, etc. I hired someone to build the website and I hustled to get the keys into stores. I delegated different tasks and hired skilled people to run all of the different departments. (We now have over 50 employees and are in more than 2000 stores.)

My friend Brit Moore became our production manager almost three years ago; she re-built our website and is now our president. Every CEO has advised me to delegate—we can’t do it all. 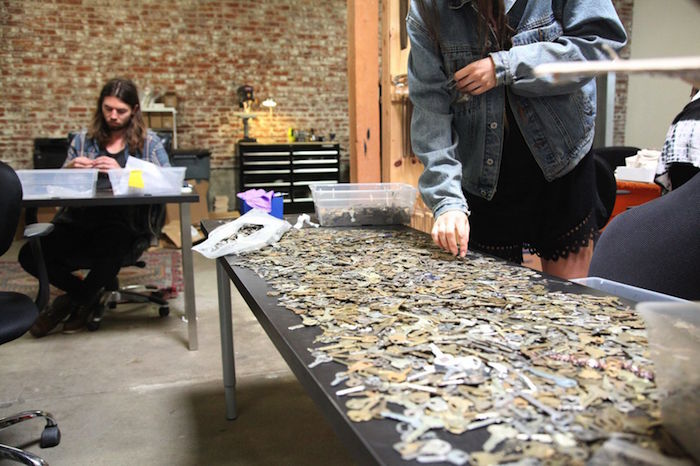 Over the years, The Giving Keys has partnered with reputable charities like United Way, PATH, and Chrysalis. How did you create these partnerships?
We simply reached out to them! Through a lot of trial and error, we created a program where we pay certain partners (in addition to what we pay the actual employees) and they screen people that are trying to transition out of homelessness. We train and hire them on a trial basis for six months and then if we feel they are ready to be on our full-time pay roll, we have a (tear-jerking) bell ringing ceremony to celebrate the graduation.

Tell us about your team and how it has changed and evolved over the years. How do you find the right people to join the mission of The Giving Keys?
At first (after I hired the original homeless couple) I hired friends and random people I met out at dinner parties to help keep up. Now we have hundreds of people applying for each job opening, so we have a Director of HR who conducts professional employee searches and holds initial interviews. Everyone knows that I only want people on the team who are passionate about people and passionate about our mission.

What does an average (or close to it) day look like in the office?
I usually wake up and email in bed. Then I get ready for meetings and email in my mobile office (my car) and if I have time between meetings, stop at a restaurant to eat and email.

Then I go to The Giving Keys office to get updates on our employees’ lives and issues I need to help with. Then more meetings, or I give one of our supporters a tour of HQ and introduce them to a few of our inspiring employees that are transitioning out of homelessness.  I’m also starting to take spin classes after work to decompress. I order Thai food delivery and end my day on the couch catching up on mindless reality shows to further decompress. 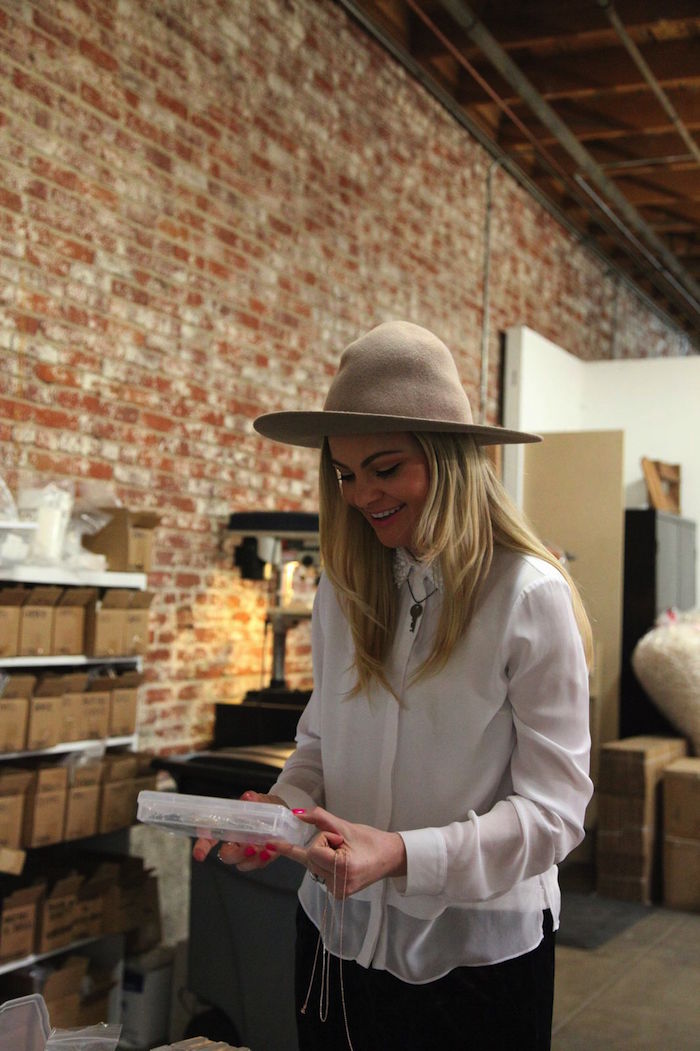 You were chosen as a spokesperson for Oprah’s top 10 favorite charities at her Live Your Best Life event. What can you attribute to this kind of recognition?
That particular event/honor was because I was the spokesperson for this incredible organization called CampCope.org, which aids children and families in the military. It’s the most incredible cause (and a 501c3). It was such an honor to serve with them at their camps as well as represent them at Oprah’s event.

Even as CEO of The Giving Keys, you continue to appear in dozens of TV shows, commercials, and films, and even released an EP last year with Adam Anders from ‘Glee.’ How do you find the time to take on these opportunities and still maintain your business?
I’m still figuring out how to fit it all in. I’m constantly stressed about feeling like there’s not enough time to do everything and, really, there isn’t. All that entertainment industry work was mostly before The Giving Keys, which helped give TGK its platform but now TGK has taken over my life so I need to carve out time to invest in my entertainment career.

To combine forces, I’m starting to work on The Giving Keys album with my record label president Adam Anders. It’s going to be a compilation CD with different artists that support TGK. I’m starting to write songs for that project now.

In what ways do you still want to see The Giving Keys evolve as a business?
Currently we are expanding our jewelry line with new inspiring products—I’m extremely excited to launch. We’re also expanding into other lifestyle, fashion, and concept products. The ultimate goal is to get as many people off the streets by creating more jobs for individuals trying to transition out of homelessness. Needless to say, I don’t sleep much!

What advice would you give your 23 year-old-self?
Don’t be so hard on yourself. You are unique for a divine purpose; there’s no one else like you. Embrace all your quirks and so called imperfections. Change your perspective and know that those things make you you—and that’s a beautiful thing.

Caitlin Crosby is The Everygirl…

If you could travel anywhere, where would you go?
Bali

If you could have lunch with any woman, who would it be?
Oprah!

Life motto?
“Be wise as a serpent but gentle as a dove.” MATTHEW 10:16. Also this quote by Mother Theresa: “Don’t wait for leaders. Do it alone. Person to person.”