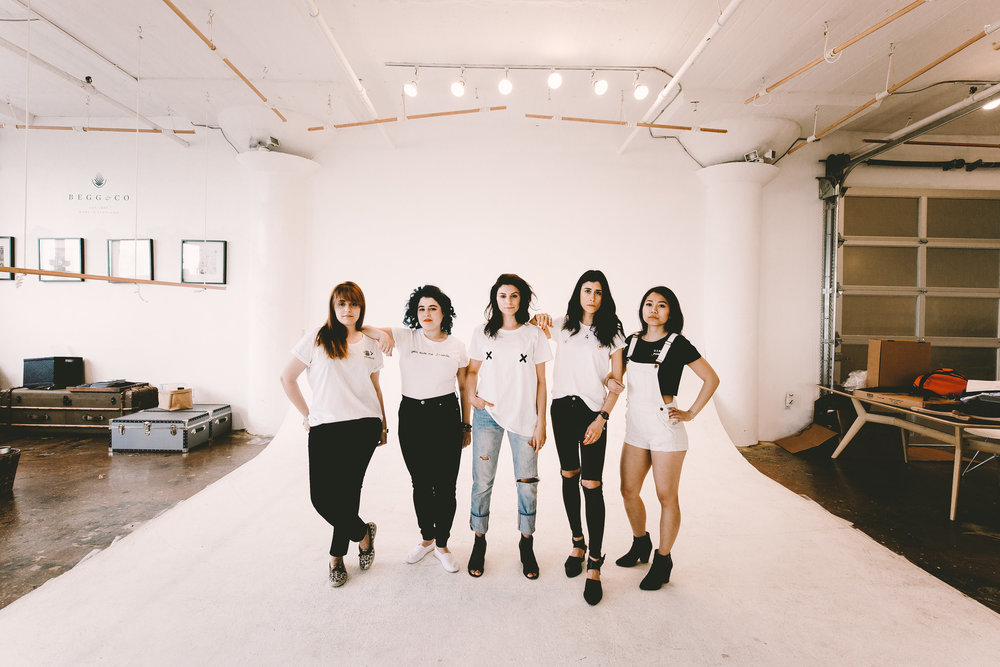 In a world filled with political turmoil and lotttts of different opinions, it’s easy to feel like your voice gets lost in the shuffle (It doesn’t — but it’s easy to feel that way.). In a society of Tweets, Facebook posts, and rallies galore, it sometimes feels as if you’re not able to make a statement in your own unique way. The ladies behind Femininitees are here to change that.

Femininitees is a line of apparel designed by women, for women. After stressing about the political climate of the U.S., and wanting to make their voices heard, Kara McGinley and Cassie Lintelman created their own way to speak their minds: a line of feminism-positive clothing designed to give voice to their feelings through fashion.

Sounds amazing, right? Here, Kara and Cassie tell us how they started the company in their Brooklyn apartment, how they manage their now-massive orders, and their advice for every woman living in America today.

What was your first job, and how did you land it?

Cassie: My first job out of college was at a showroom and I got the interview through a family friend. I was an unpaid intern. It was a very The Devil Wears Prada situation, but I learned a lot and it lead to more opportunities.

Kara: My first job out of college was working as a personal assistant for a woman who owned her own boutique marketing firm. I had to basically send her emails and copy edit her client’s marketing materials and websites. I got it through Craigslist lol. 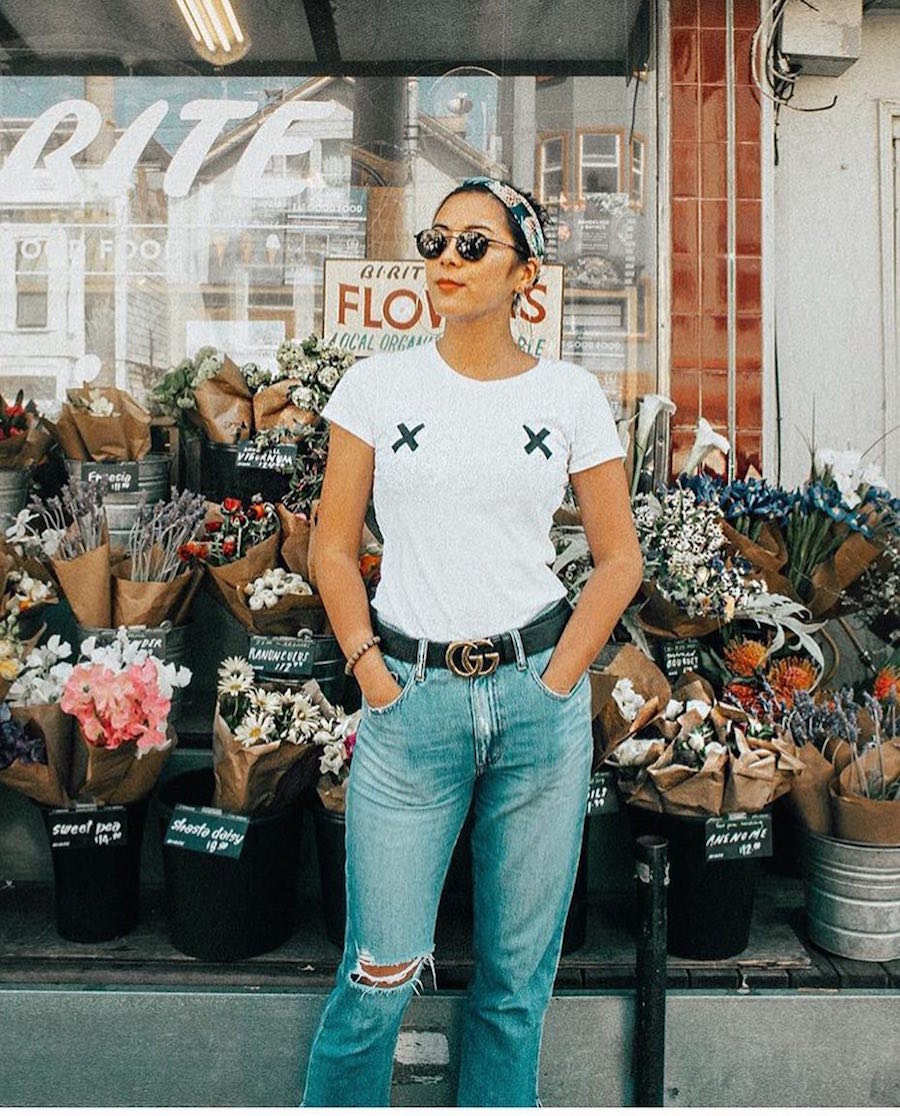 How did the two of you meet?

Kara: Cassie and I became roommates through a mutual friend named Nicole.

When you met, did you imagine you would one day become business partners?

Cassie: No not at all, especially because we work in pretty different fields.

Tell us how you formed the idea for Femininitees.

Kara: Cassie has been designing and making her own clothes since she was a little girl. She’s currently a designer for a women’s apparel company. I’m a freelance writer with a focus on women’s interests. Cassie’s grandma taught her how to embroider when she was young and she was inspired by Rachel Antonoff’s 2015 RTW embroidered pieces. We were talking about the upcoming election and all the things going on in the world and wanted to contribute somehow. So Cassie started fooling around with her own designs and approached me with the idea of the “Nipple T-shirt.”

After that, we stayed up drinking wine and came up with a bunch of designs. It was important to us to create a platform that gave women a way to voice their feelings through fashion and donate to amazing organizations as well. 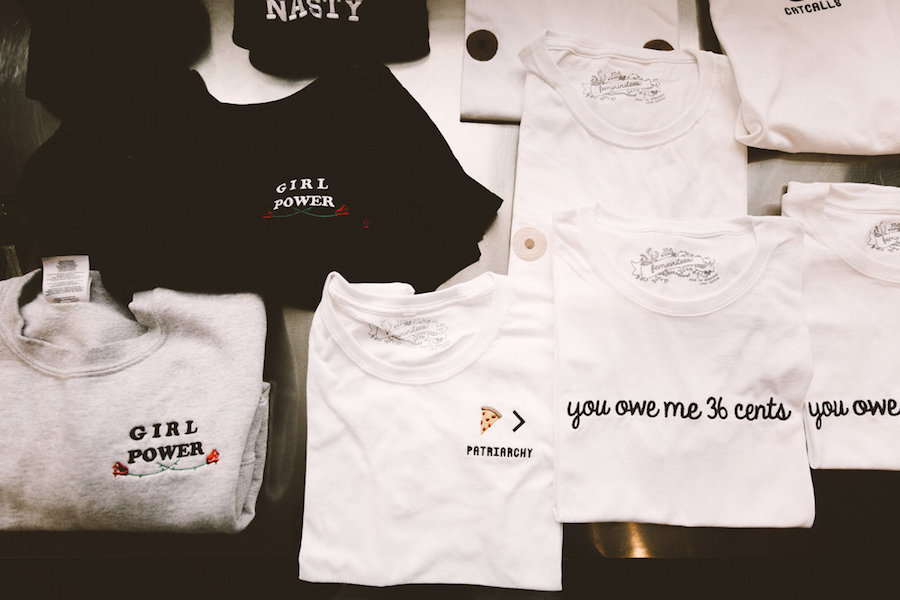 Once the idea was formed, what steps came next? Had either of you ever been a part of the creation of a new brand or company before?

Cassie: We originally were making the shirts per order. Since we were hand embroidering the designs I had to teach Kara how to do it, which took a fair amount of time lol.

Kara: Yeah, I was only allowed to embroider the easier designs. We set up our site on Etsy. Neither of us had been involved with a new brand or company before. We had to learn and teach ourselves most of what we now know.

Tell us about the trajectory of your company. How did you gain exposure and grow your brand?

We didn’t really go into this with a game plan. There was no strategic marketing campaign, we made an Instagram and asked our friends to follow it. We started out as an Etsy site with all of our products embroidered by hand and shipped individually. Through a lot of political aggravation and some celebrities who shared our same anger, Femininitees grew to what it is today. Influencers and activists and celebrities started posting us, everyone has been so generous. Social media really helped further our brand and what we do more than we could have ever imagine. 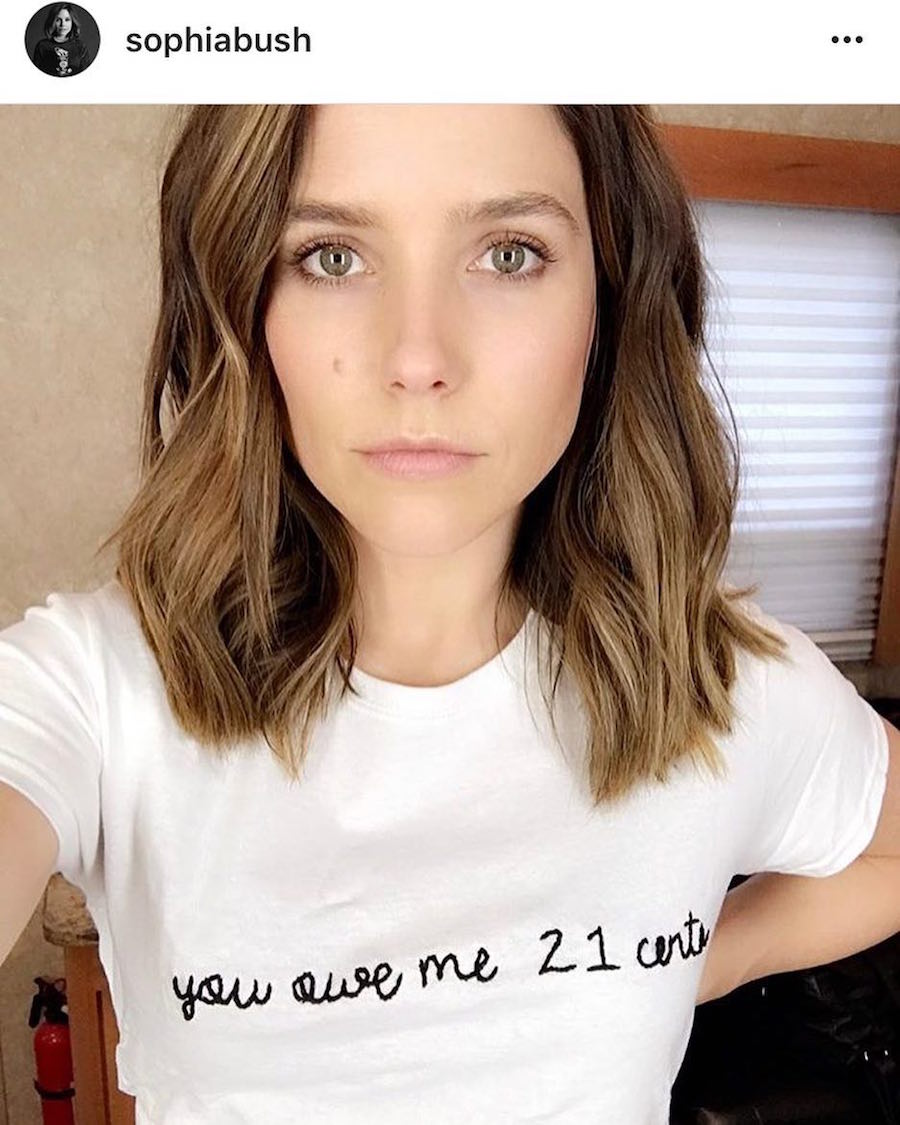 What was the most unexpected part of creating your own business? Is there anything you wish someone had told you before you started?

The most unexpected part of creating a business is probably the growth, which seems backwards, but is true in our case. When we started Femininitees our goal was to give women a way to express themselves, raise awareness for the inequalities that women face daily, and to help give back to women’s rights organizations in the process. We never thought we would gain the exposure and growth that we are at today. Not much could have prepared us to be ready for this, but we are so grateful to be here.

If there was one piece of advice I wish we would have gotten before starting, it’d be to take a deep breath at times and don’t rush into things that don’t feel right. There are often times we get frustrated and overwhelmed and we’re definitely learning as we go, but when we sit back and think about how far we’ve come and what we’ve accomplished it’s all been worth it. Embrace every moment and learn from every obstacle.

What is it like to work full-time while also building a business on the side? Tell us the good, the bad, and the ugly.

Kara: There certainly is a lot of stress when it comes to the workload we both hold on our plates.We have more of a system in place now, but there were times that we were working seven days a week from dawn to dusk. We would eat, sleep, live Femininitees all while maintaining 9-6 full-time jobs. Cassie used to bring her embroidery wheel on the subway just to make sure we got orders out in time (imagine the looks she got while embroidering nipples on the L Train at 8 am). We hired some of our best friends as “interns” to help us package, label, and ship 500+ orders at a time all by hand. It’s crazy to think about where we started when we look at the well oiled machine that is Femininitees now. We are still definitely learning A LOT, but it’s gotten more manageable thanks to some great partnerships. We’ve grown with the company and we’re excited to see where it continues to go. 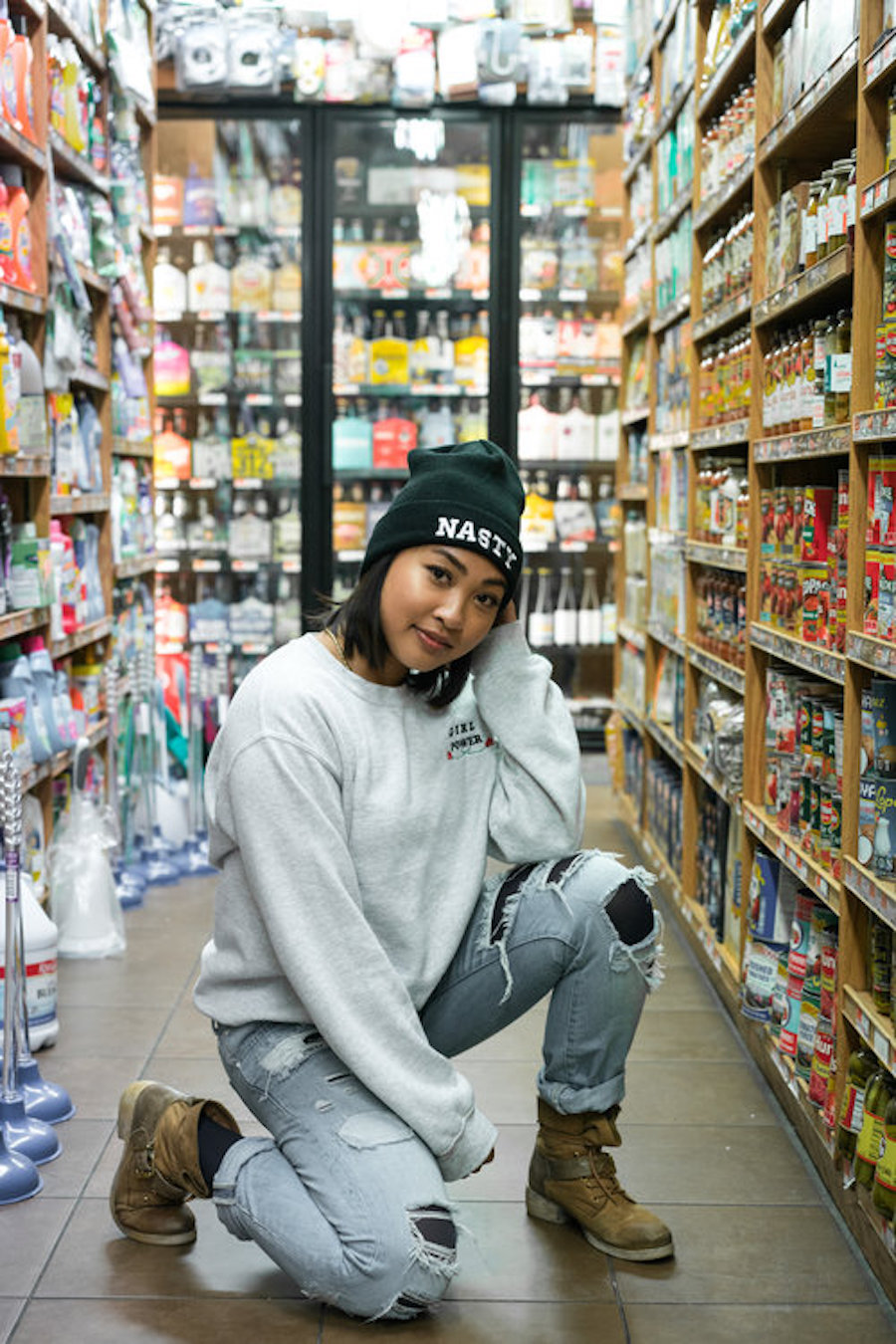 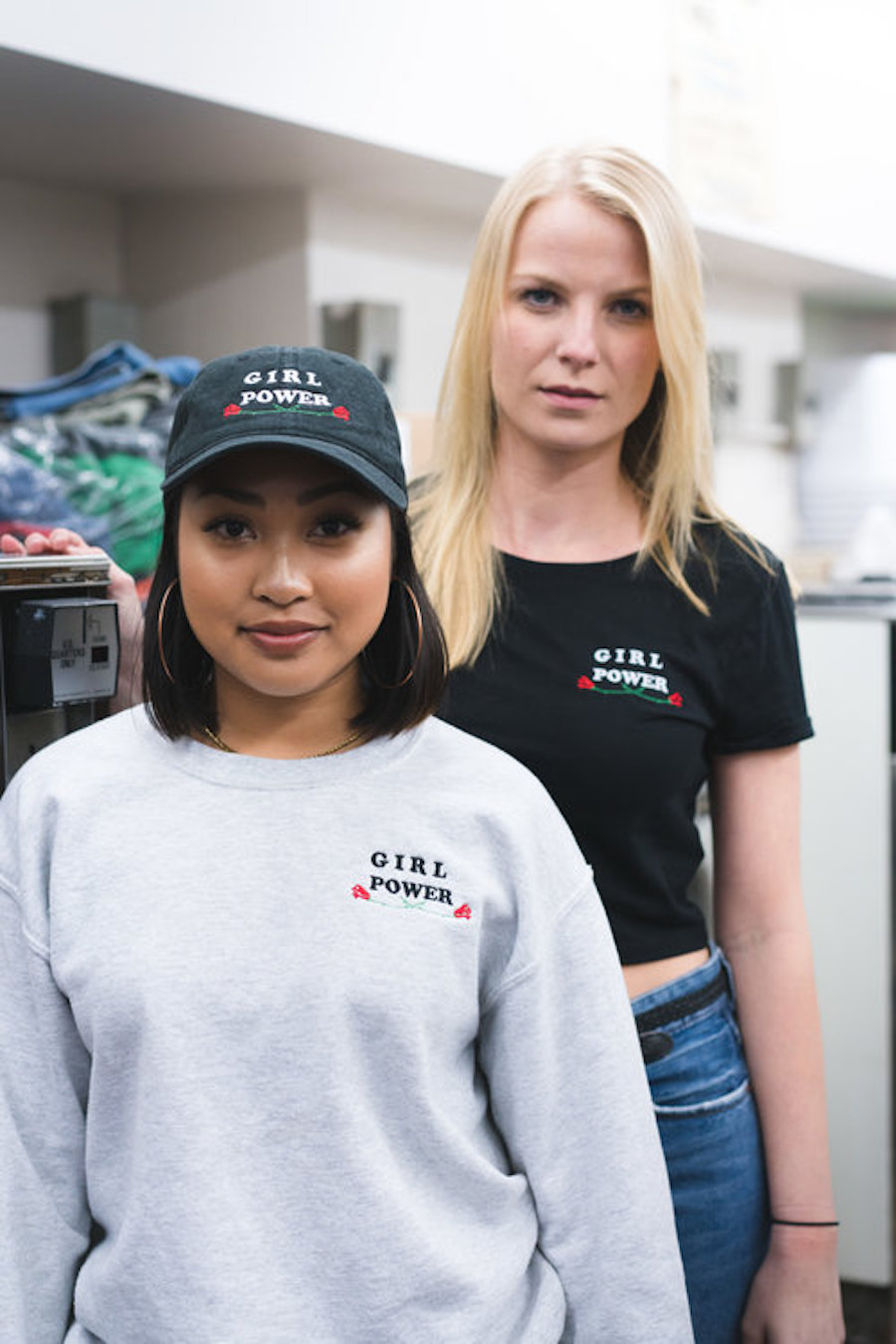 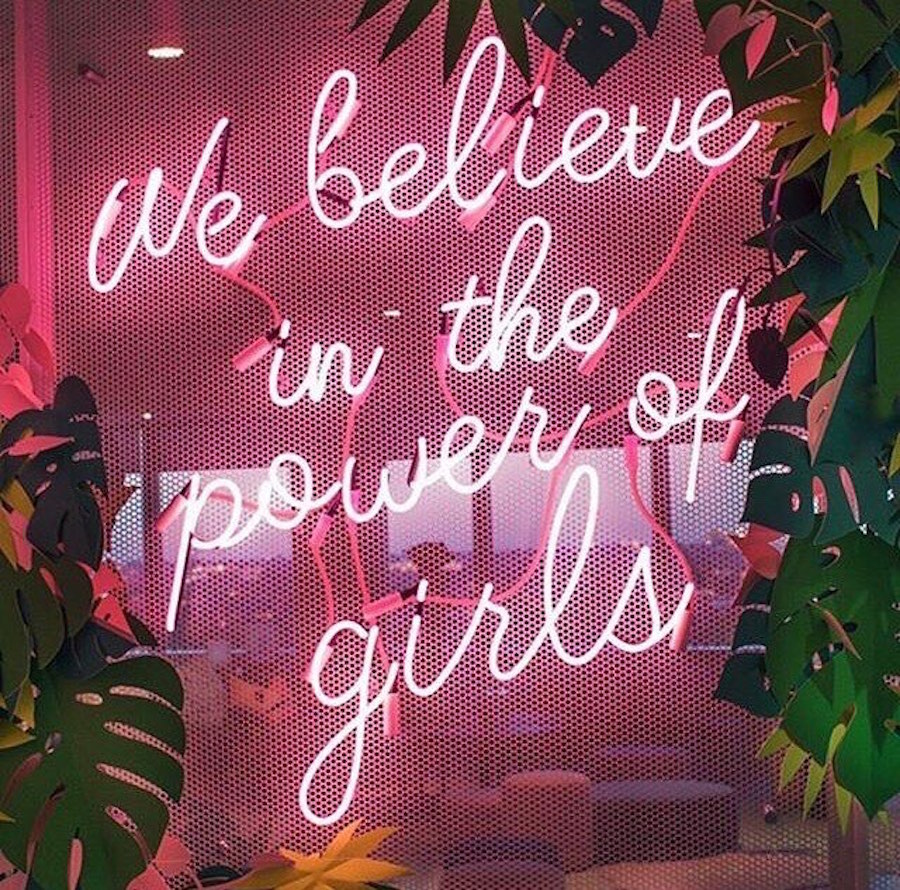 People have said “don’t mix business with pleasure,” if this is a rule, we are definitely the exception. The entire reason Femininitees was started was because two best friends confided in each other over their insecurities, fears, and dreams. Kara and I work so well together because for as similar our beliefs and ideas are, our minds work very differently. We are able to attack obstacles from every angle and to make new ideas bigger and better. If you are thinking of starting a business or joining a business, our advice would be to make sure you find someone that compliments you and challenges you. Sometimes we disagree, but those are the times that we grow better as business partners and a business. You need someone to keep you be ambitious but also level-headed and grounded to be successful. Some of our greatest successes came from our conflicting ideas.

What is the overall message and mission for Femininitees? What do you hope people gain or learn from your brand?

Femininitees was started because despite major advances, the United States is still not a place where females have equal pay, where they can revel in uncensored lives as men do. Women’s bodies are judged and often shamed while their voices remain apologetic. Each of our products has a specific message that aims to bring attention to the gender inequalities females deal with everyday. A portion of all proceeds is donated to major charities such as the National Organization for Women (NOW) and Planned Parenthood. We hope that through this endeavor we can give girls confidence to speak out about injustice and take a small step towards gender equality.

Which of your products is your favorite? Which is the most popular (and why do you think that particular piece is so popular)?

Cassie: Our best seller is our wage gap tee. We customize the design based on race, because the pay gap is a race issue as well as a gendered one. We think it’s the best seller because it’s a huge issue and we made the shirt intersectional, which is something that’s very important to us. 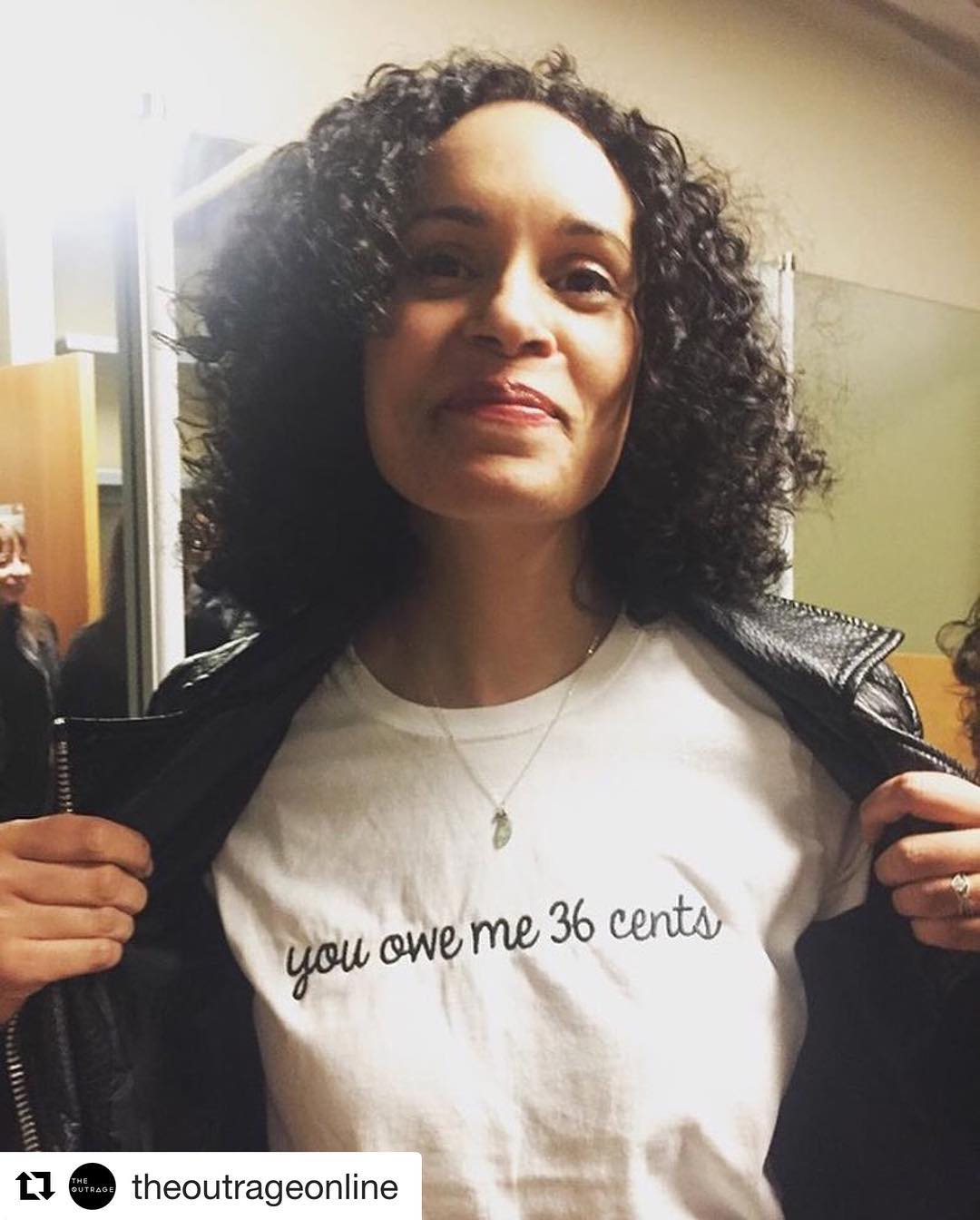 Do you ever feel concerned, threatened, or worried about standing up for what you believe? Do you have concerns for future of your business and its rights? If so, how do you combat those fears?

The simple answer to this question is yes, very concerned. It is always hard to tackle issues at a magnitude like this without feeling threatened by people who don’t agree or condemn you for standing up for what you believe in. But, if there is one thing we’ve learned it is that if you have people standing up against you, it means you’re starting the kind of change you aimed to do. If you have the privilege of being able to speak out and stand up without feeling like your life is threatened, then you need to do it because there are so many people that can’t. We think silence can be a form of violence. Now is not the time to sit back because politics don’t affect you. We all need to fight.

What words of encouragement do you have for women living in America today?

Stand up for what you believe in and don’t stop after winning one fight, there’s so much to be done not just for women but for all marginalized people. Every woman has the capabilities and strengths to be great and the more women shed their instilled insecurities and confidently show who they are and what they’re here to do, the world will be a way better place. We’re all in this together. For every woman breaking down barriers, there’s millions of others behind her just waiting to show their own strengths.

Where do you see yourselves and your business in five years?

Based on the way things went for Femininitees in the past two years, it’s hard to guess where we could be in five years. Our hopes are that we’re continuing to make an impact that leads an contributes to concrete, palpable change. We have a lot of work to do until we live in a country that feels safe for everyone, sometimes that feels impossible. We hope that one day a company like ours won’t need a reason to exist, but until then we hope to continue to start conversations and give back every step of the way.

What advice would you give to your 23-year-old self?

Kara: Clean your room or you’ll get bed bugs.

Stand up for what you believe in and don’t stop after winning one fight, there’s so much to be done not just for women but for all marginalized people. 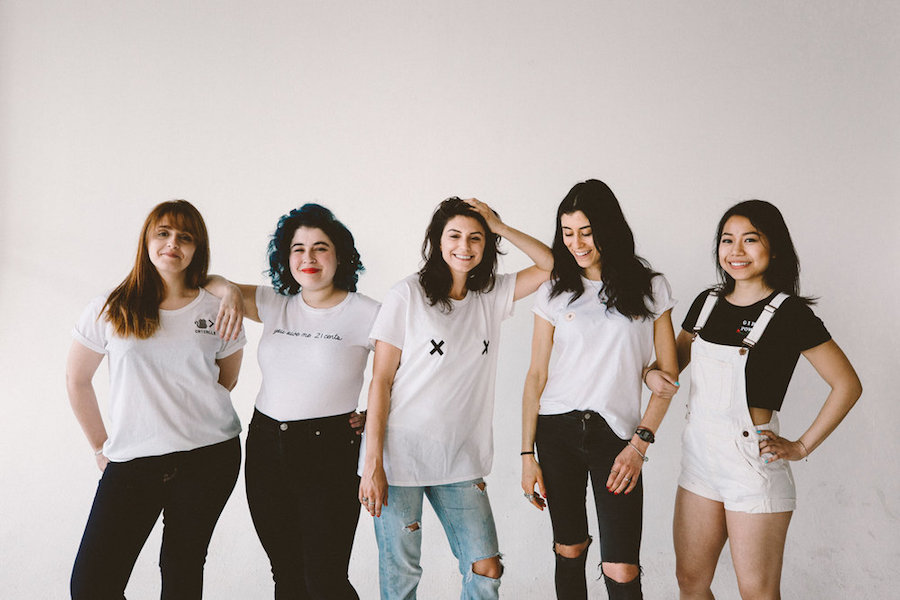 Kara McGinley is The Everygirl…

Movie you could watch over and over?
Girl Interrupted

If you could have lunch with any woman, who would it be?
Toni Morrison!

Cassie Lintelman is The Everygirl…

Movie you could watch over and over?
Law Abiding Citizen

If you could have lunch with any woman, who would it be?
Toni Morrison!