When you graduate from one of the top fashion design programs in the country and launch your career on the founding design team of Madewell, one could surmise that you’re on the road to success. Still, Lindsey Carter couldn’t have envisioned how rich her life would later become with her own fashion brand gracing the shelves of stores like Anthropologie and Rent the Runway, becoming a mom to twins, and operating out the most stunning design studio and office space, perched on the charming streets of Charleston.

So how did a woman working underneath the CEO of J.Crew in New York City find herself in the southern seaside town of Charleston? Love. When her fiancé’s family business took them back to South Carolina, Lindsey wasted no time getting her own business off the ground. “Of course I have thought about what my career would have been like if I stayed, but I also wouldn’t be staring my two adorable twins in the face right now either. Life forces you to pick a path.”

From the looks of it, we’d say Lindsey chose right. 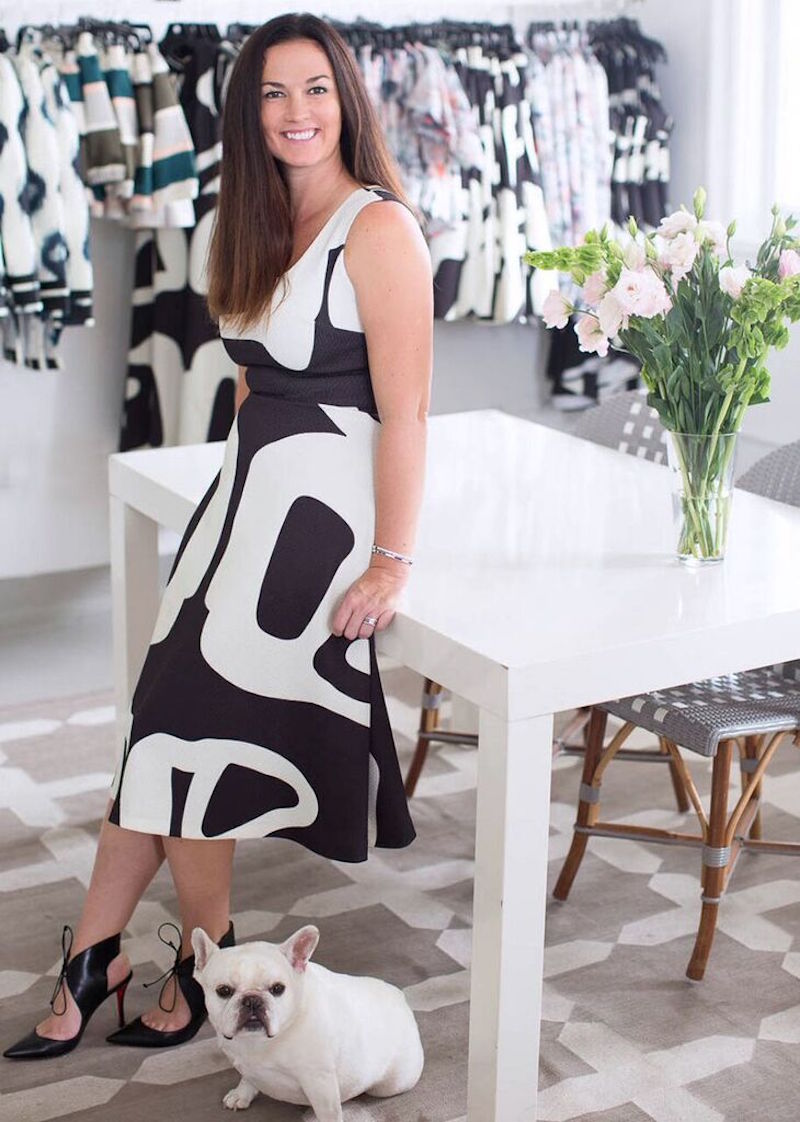 Let’s start from the beginning. You graduated from University of North Caroline at Chapel Hill, before continuing at the New York Fashion Institute of Technology. Was there a break in between or did you go straight into school at FIT?
I studied psychology at Chapel Hill, and still love watching people and studying their behaviors and mannerisms. If you pay attention you can normally pick up on what people are thinking. I also love cause/effect of behavior as well, and how childhoods and personality shape lives. I took a year off in between to get my portfolio together for FIT and lived in Atlanta, then moved to NYC and went to F.I.T.

Was studying fashion in school what you expected? Is there anything that surprised you or any advice you would offer those considering studying fashion?
I loved it! I did the two-year program instead of the fast track one-year on purpose. I wanted to have time to let it all set in. It was such a different kind of learning than UNC, and it was important to me that I was taking the time to let everything soak in. My advice would be not to rush it! Learn everything you can on the technical side because it will come in handy. 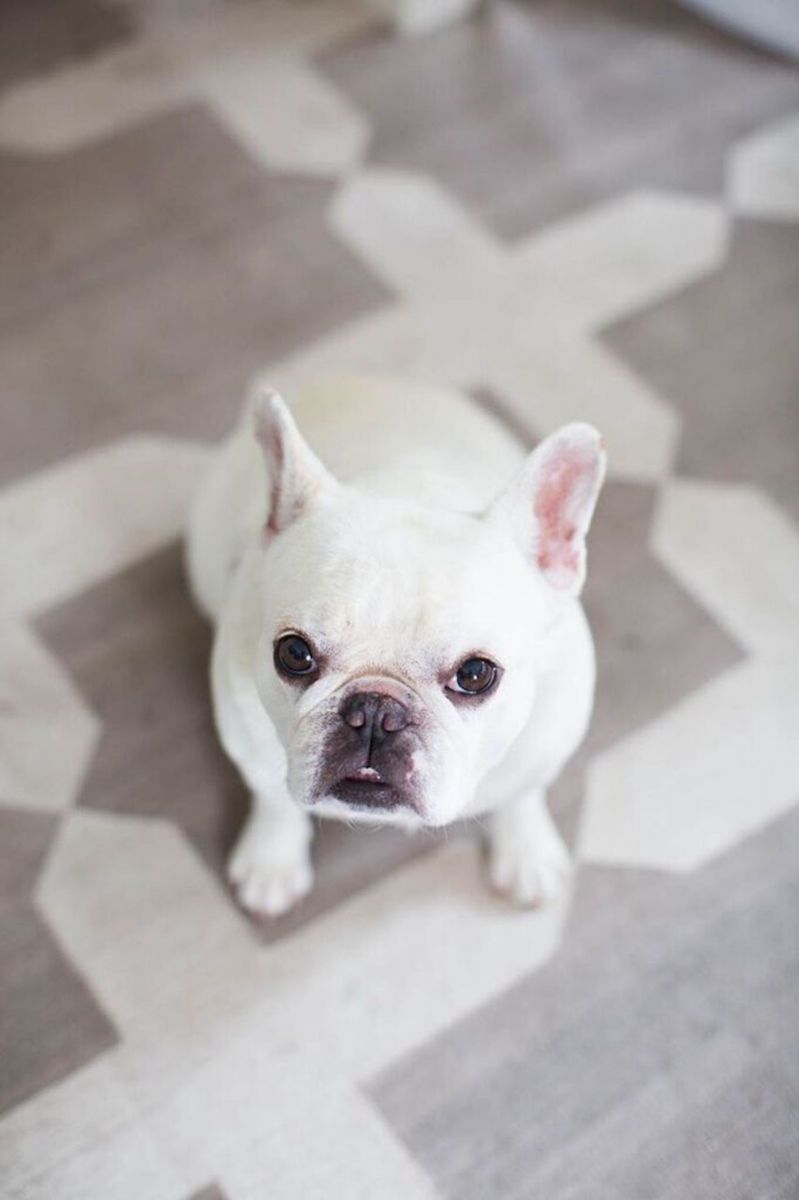 You held some impressive internships during that time with designers including Rebecca Minkoff, cashmere label White + Warren, T21 by Elie Tahari, and LAMB. What were the biggest takeaways and lessons you learned as an intern?
One big takeaway was that if you work hard, people will notice, and call you later for a job! They were all such different fashion companies and each had its own feel. I learned with RM that sometimes it takes time to grow a company (she did clothes before her famous bags, then clothes again). I learned the value of hard work at W+W, as one lady called me later for a job. At T21 I learned that it’s important to have brand vision, and that sometimes regardless of your connections or backing, it still doesn’t mean you’ll “make it.”

My internship experiences later influenced how I would approach interns here. It’s not all coffees and lattes—it’s important to let them get their hands dirty. There will be fun days and not so fun ones, but it’s about the overall experience of letting them feel like they contributed in some way, and not just the go-to for errands. 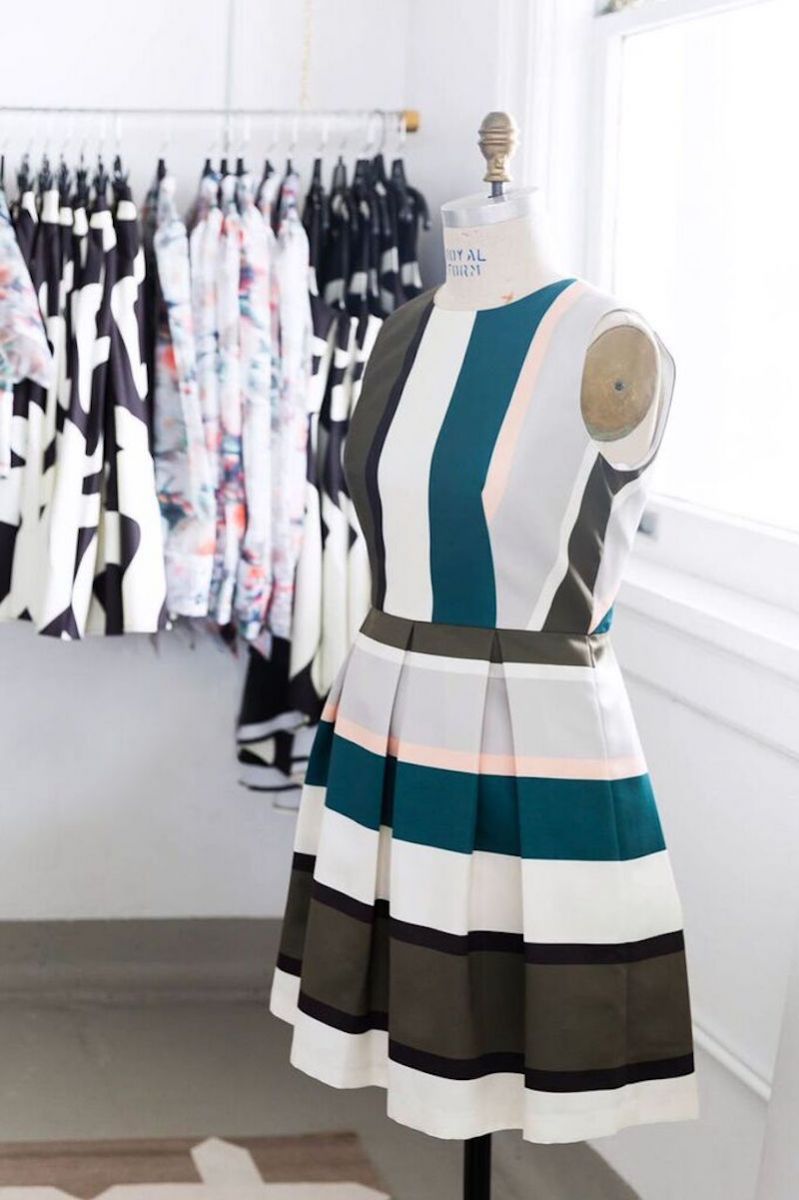 After graduating, you were tapped by the J.Crew CEO to join the start-up design team for Madewell, an absolute dream opportunity! How long were you there? What went into being selected for the team? What did your days look like, and how did that time prepare you to eventually start your own line?
At that time, it was just being called “concept M” and the head of the J. Crew men’s knit division had moved into developing the concept further with Mickey [Drexler, J.Crew CEO]. I was working on his team, and was one of the first hires for the actual Madewell team. We moved into the J. Crew headquarters at 770 Broadway, our first office.

I have so many fond memories from that time—there were only four of us, then five, and it kept growing. I was getting experience in many different product categories, which for a young designer was pretty amazing. Days there were really long; there was too much work and not enough people. Weekends were spent working, there were late nights doing rigged concept rooms, many 8 p.m. dinners at the office. But I was young and hungry and it was exciting.

Weekends were spent working…there were many 8 p.m. dinners at the office. But I was young and hungry and it was exciting.

When you decided to focus on your solo career, you moved from New York City to Charleston. What prompted that move? Were you concerned about missing opportunities in New York?
I started dating my high school/college sweetheart after being in NY for a couple years, we got engaged and since he is third generation families business and based out of my (our) hometown of North Carolina, I knew I wouldn’t be in NYC for forever.

And yes, of course I have thought about what my career would have been like if I stayed, but I also wouldn’t be staring my two adorable twins in the face right now either. Life forces you to pick a path. 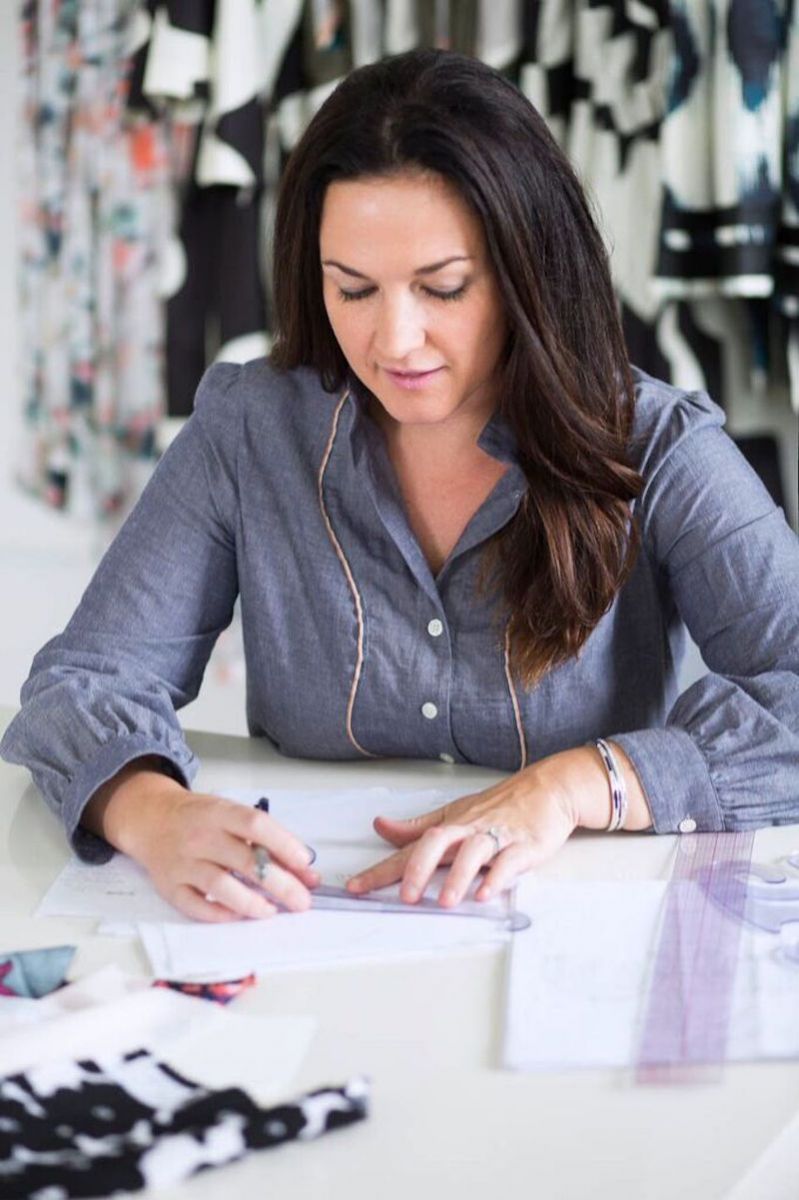 When you first started your brand, tell us about getting investors and finding your niche in such a competitive industry. How did you market yourself after creating your first collection?
Troubadour is privately funded, but I really think the niche was solidified with the SS2013 collection. It was quirky, fun, and bright and people responded really well. We still get inquiries for our “pink” dress from that season.

Learn everything you can on the technical side because it will come in handy.

Troubador is now carried in Anthropologie, Rent The Runway, and specialty boutiques across the country—a great success! When did you begin to feel like you really “made it?”
When one of our dresses graced the cover of the 2015 April Anthropologie catalog. That was pretty awesome! 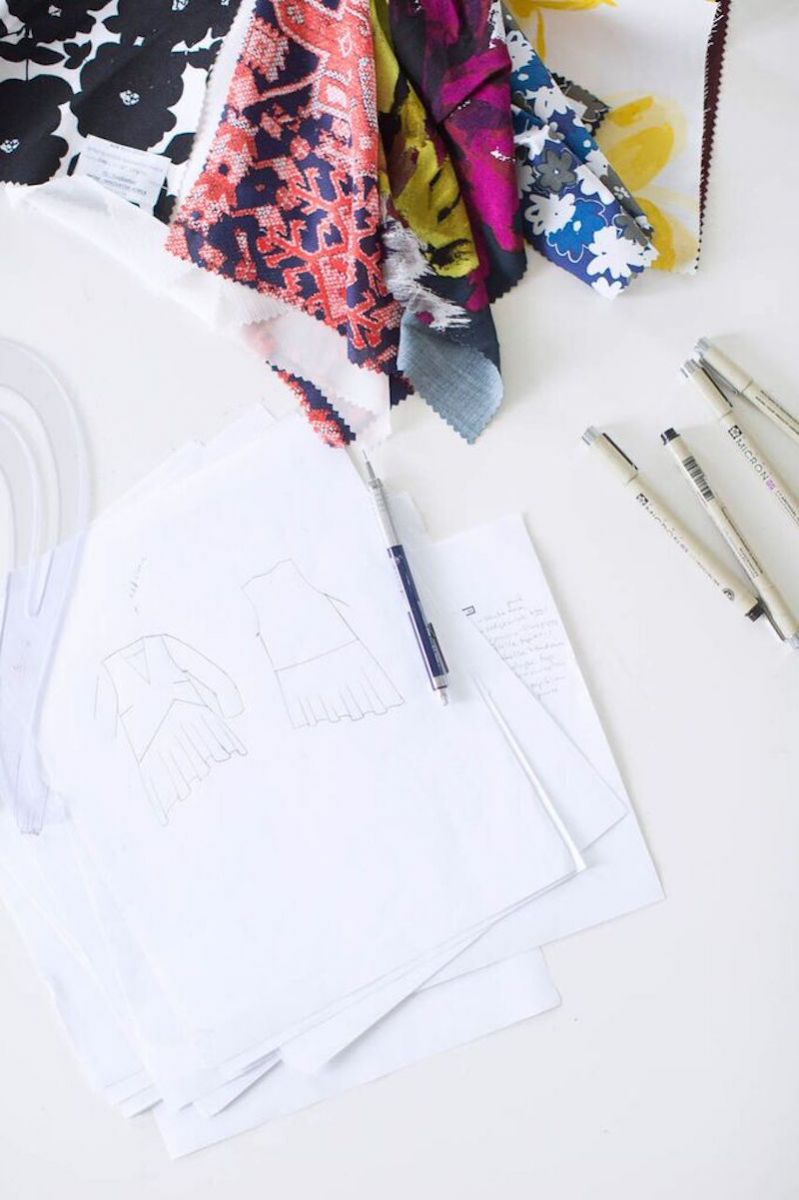 What does your team look like now, six years after launch?
One in-house full-time employee. However I also work with a showroom, a production consultant, and a PR firm. All together there are about seven people who make the wheels turn.

I knew I wouldn’t be in NYC for forever. Of course I have thought about what my career would have been like if I stayed, but I also wouldn’t be staring my two adorable twins in the face right now either. Life forces you to pick a path.

How long did it take you to complete your first collection, and where did you debut it?
It was very small, only about 10 looks and I debuted Spring Summer 2010. I showed it to a handful of stores the first season. I think I sold it to 10 boutiques and thought, this is awesome! We’re doing good! I baby stepped it.

Outside of work, you’re also a mom to twin toddlers, a wife, and a dog mom to your French bulldog. How do you divide your time between professional and personal life?
My schedule is always changing these days, but luckily I have an amazing employee who can handle most anything. If I can’t get to it, I know she can.

And I also have help at home. So between all the help and juggling, it somehow gets done! Luckily I can work from pretty much anywhere now, and if I need to send emails late at night I can.

What advice would you give your 23-year-old self?
Take an accounting class! 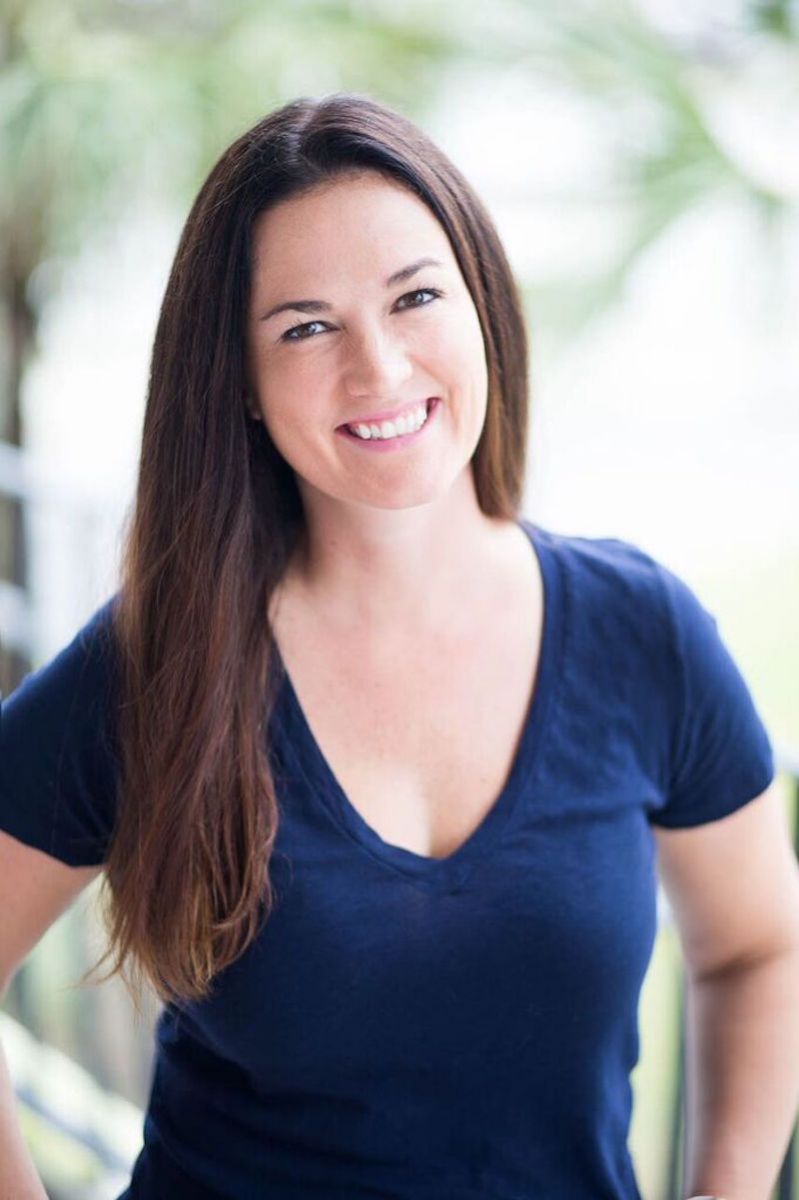 Lindsey Carter is The Everygirl…

Ideal way to spend a day off?
With my husband, dog, and twins on the boat.

Work uniform?
All summer: A Troubadour dress and slip-on vans.

Favorite way to get inspired?
Music and photography

If you could have lunch with any woman, who would it be and what would you order?
Oprah. We would meet in New Orleans over beignets.