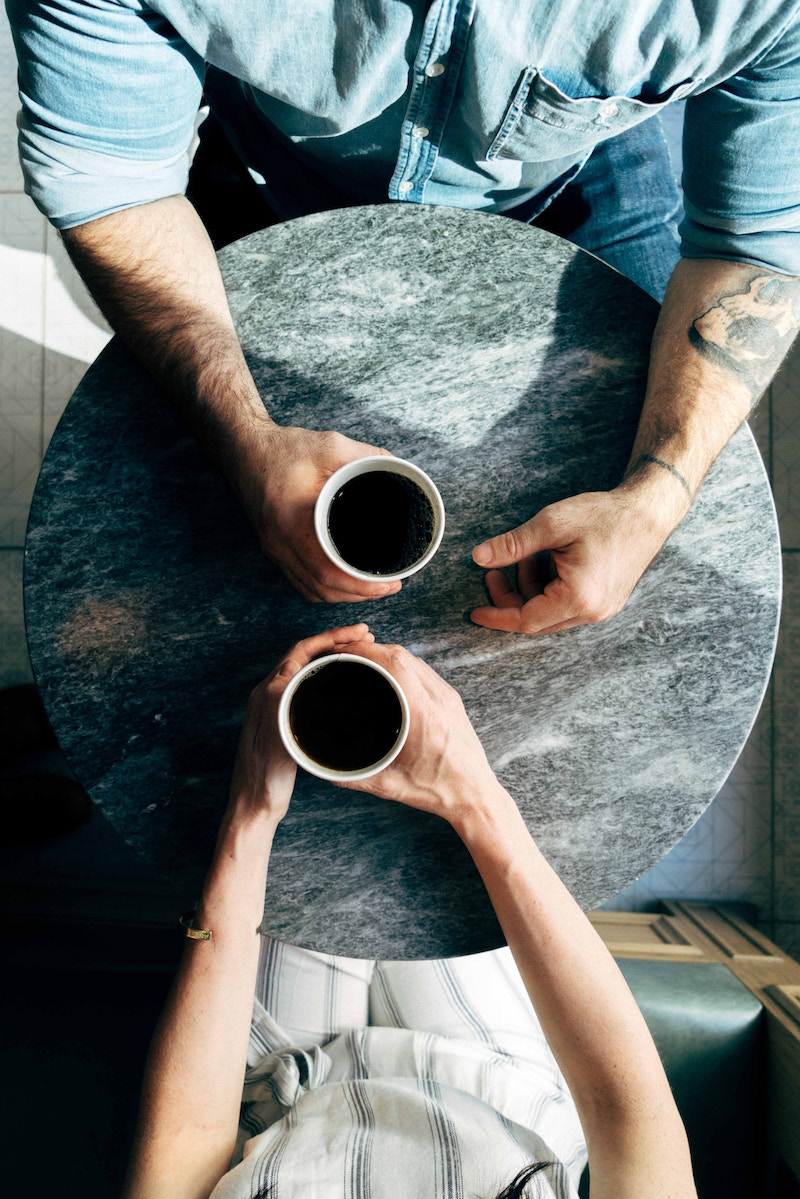 BOOM!  I made a connection. And then thought, “Meh,” after I took a closer look at his profile, but he extended the match, and the Gayle to my Oprah encouraged me to, “Reach out!  He’s CUTE!”

Cut to meeting for a quick drink the following night as he had “dinner plans” after, and I gotta say, I was pleasantly surprised. He walked in wearing a hot, black, Danny-Zuko-style-leather jacket that wasn’t too machismo, and immediately came off as down to earth, funny, humble, and kind. The bartender asked if we’d like a second drink, but I was conscious of his post-date plans.  However, it was JASON (that’s his actual name because let’s not protect the guilty), who also seemed to be enjoying himself, who said, “I’ll just go to dinner late. If I get there by 8, I’ll be fine,” and ordered us another round.

Well 8:10 rolled around as we finished our second drink, so naturally I thought I’m DEFINITELY getting a rose — I mean — second date. I confidently owned that I had a great time and would love to do this again. He darted this dreamy gaze into my eyes and then emphatically responded with, “I would LOVE to do this again.”

A lovely lingering smooch ensued, and as my Uber pulled up, his final words were the KICKER: “I really don’t want to leave…”

Then, after two days of crickets, HE UNMATCHED ME.

If you’re like most of my girlfriends who’ve heard this story, you might be thinking, “He COULDN’T have said that and then UNMATCHED you?!,” but that’s exactly what he did. Cue the pit-drop in my stomach that instinctively responded to the automatic thought of being “rejected,” as I tried to wrap my head around what I missed. After all, I am a life coach and pride myself on having a pretty good read on people, both personally and professionally.

Did I MAKE UP that he didn’t want to leave?  Did he feel like he HAD to kiss me?  It was HIM who said he wanted to have a second drink, not me… RIGHT?! I literally was gas-lighting myself because… WHO DOES THAT?!

And then this self-help nerd did what she does best…

PLUGGED her CRAPPY THOUGHT — Jason rejected me — into Byron Katie’s thought-work tool called The Work. For those of you who are unfamiliar with The Work, Katie invites us to look at different angles of our painful thoughts, with the intention of expanding our limiting perspective to ultimately free us from our own self-inflicted pain. Yes. Self-inflicted.

Just so we’re all on the same page, the thought, “Jason rejected me,” is just that — A THOUGHT. NOT A FACT. Let’s say I too had no interest in seeing Jason again… then my automatic thought of him unmatching would be, “PHEW!  Now I don’t have to tell him I’m just not that into him!” But, because I was interested, his action of unmatching caused my brain to perceive the situation negatively. So, in my mission to consciously make a more self-empowering meaning out of what transpired, I flipped the subjects in the thought (Jason and I) ,and looked for three ways to support how that statement could be true, if not truer than what I was initially thinking…

Instead of, “Jason rejected me,” I looked for evidence to support the possibility that…

Just so we’re all on the same page, the thought, “Jason rejected me,” is just that — A THOUGHT. NOT A FACT.

Roll with me here, if you’re still thinking, HUH?! This is simply an exercise to expand how your mind could see the situation in a different light that juuuuust might make you feel a liiiittle better.

1. Well, in my Uber ride home, I did call Gayle to say, “I think me being a life coach freaked him out. His face looked like I was telling him I just gave birth to a baby goat last week.” But when I playfully acknowledged his perplexed look, he insisted he just “makes weird faces when he’s listening” ….mmkay

2.  When he mentioned his past relationships, he admitted he’d rather pull back and wait for her to figure out he’s no longer interested. When I asked why he wouldn’t just tell her directly, he said “Do you know how hard it is to see someone cry because of YOU?”  I said, “Do you know how much harder it is for her to be with you, not knowing you don’t want to be with her?”

3. He volunteered that he doesn’t and would NEVER need a life coach. Ummmm…. okay.

The thought “I rejected Jason” was starting to feel a bit more true to my core and um, freeing as f%$, instead of thinking, “Jason rejected me.” The Work involves a few more steps, inviting deeper introspection in Katie’s book, Loving What Is, which I encourage everyone to read, but I hope this one turn-around of my negative thought can offer how we actually have way more power over how we choose to think and feel about our dating journeys.

Sure, it was easy for me to shift my perception of a guy I had zero emotional attachment to after only knowing him for two hours, but prior to this work, I would have used an incident like this to support ideas like, “Dating in LA sucks!” or “Guys on Bumble are douches.” I can’t tell you how many clients continue to create similar, dramatic, self-sabotaging stories, only to play out the same disappointing song and dance with the next guy, resulting in a very victim-y, “WHY-ME?!” cycle. But notice how that’s giving A LOT of power to the cowardly Jasons of this world, who only appear as blips on our radars over the grand scheme of our lives.

What if we stopped blaming external factors like apps and cities, and started focusing on internal factors like being so in love with who YOU are and what you have to offer as a partner? I’m not suggesting you announce on a first date, “You’re welcome for my presence,” (even though DUH — he is) but I am offering you that you show up feeling so genuinely excited and proud to share who you are, that if he ended up not being that into you, you’d be totally fine! Because if my hunch is right, and Jason, like many dudes I’ve dated, couldn’t get on board with my being a life coach, I have no problem gracefully saying, “Boy Bye.”

Being a life coach is my JAM. I LOVE what I do, and ironically, it makes me a better partner because I practice the tools I preach, like taking responsibility for my actions, and not relying on someone else to fulfill my happiness. What I choose to do with my life is never going to change based on what a potential partner thinks, so good to know now if life coaching sounds too woo-woo, cheesy, or lame.

This doesn’t make him a douche, me less worthy, or Bumble a shitty app.

It just means he simply wasn’t my guy, and that’s TOTALLY OKAY. As my coach’s coach, Frank Kern, likes to say, “Make it math — NOT DRAMA.” Surrendering to the perfection of our reality is a PRACTICE. In the same way you take your body to the gym to stay healthy and strong, make the same commitment to take your mind to a quiet space and put your toxic thoughts to paper, so you can consciously rework them.

Look — would it have been nice if Jason had a little more courage and class to be direct and honest?  Sure. But I’d rather take the focus back to me and CHOOSE TO THINK more self-affirming thoughts about how proud I am to be a woman who doesn’t mislead a man and then ghost him…

Just another fabulous quality I can add to my list of of what makes me a GREAT partner… The ONLY thing I have control over.