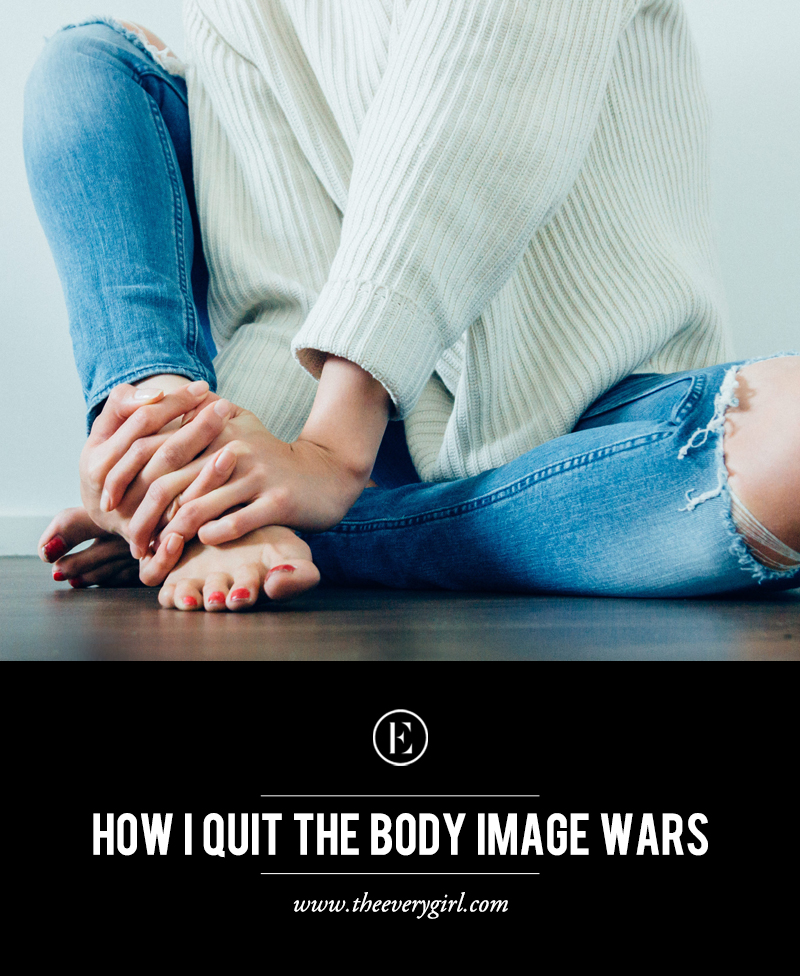 In seventh grade, the boy I liked asked another girl to the school dance, and my tender little heart broke. I was a tall, skinny kid with untamed curls, braces, a flat chest, and stick legs. She, of course, looked the exact opposite. I examined myself in the mirror with a critical eye for weeks afterward. I made a list of everything I didn’t like about myself in terms of physical appearance, and vowed to improve.

I then spent the next, oh, 15 years battling disordered eating patterns and body dysmorphia, as well as obsessing about how the number on the scale corresponded to the amount of approval I received from others. Weight was something to manage, fix, and control—like when I “saved” calories for an evening out or slaved away on the treadmill or pinched the skin around my belly or berated myself for being “bad” because I ate a bagel.

This isn’t a story about how I made myself smaller. It’s about how I chose to live bigger.

My mother would say things like, “It’s important to be pretty on the inside,” and I rolled my eyes in response. Did she even understand the power of the girls who squealed, “You look so tiny, oh my gawd!”? The boys whose eyes wandered up and down my body at a party; Could she comprehend how that felt awful and alluring all at the same time? Didn’t she read the millions of magazines lying around the house, the ones that claimed skinny equals good and pretty points to power? Theoretically, I understood her point, yet I still bought into the lie that looks lead to love.

But this isn’t a story about how I made myself smaller. It’s about how I chose to live bigger.

As women we’re told, “Nothing tastes as good as skinny feels.” We see how thinness and western beauty standards form the basis of social currency. Our looks are constantly measured, scrutinized, and observed. Weight is positioned as the No. 1 Thing requiring every ounce of our collective attention and individual energy, and our bodies are often introduced as the most valuable piece of information we have to offer the world. I ran that race for a long time, as if a giant gold star awaited at the finish line, one that would offer me all the perfection and permission I desired.

Guess what happened when I had a “hot” body or weighed the “right” amount or looked “pretty,” according to external expectations? Nothing. Nothing meaningful, that is. I was not necessarily happier or kinder or calmer. I did not automatically become smarter or more successful. Sure, I benefited from certain perks, like free drinks from bartenders, but I also slammed into other stereotypes, like the one that says attractive women can’t be smart or funny or both. The emphasis on body image didn’t stop or let up; however, after a healthy relationship, lots of yoga, and a big dose of therapy, I started to pull away from those negative narratives.

I also got pregnant, an experience that totally shifted my mindset regarding weight and appearance. I couldn’t wait to let my body do its natural thing while fulfilling the major task of growing a human being. No one will care if I’m sucking in my stomach or not! I looked forward to escaping the pressure to align to photoshopped standards.

Guess what happened when I had a ‘hot’ body or weighed the ‘right’ amount? Nothing. Nothing meaningful, that is. I was not necessarily happier or kinder or calmer. I did not automatically become smarter or more successful.

Turns out I wasn’t exempt; women are almost expected to complain about their looks and find fault with their appearance—whether they’re pregnant or not. You’re damned if you do and damned if you don’t when it comes to appearance. (If you don’t believe me, watch Amy Schumer’s “Compliments” sketch; that shit is real.) I couldn’t seem to escape the barrage of mixed messages. I went to lunch with a friend who admitted that she wanted to be a mother but feared pregnancy because of “the whole weight thing.” Another girlfriend with twins on the way said it felt like her body was on constant display for others to analyze how much weight she had gained. I heard pregnant co-workers call themselves “fat,” note that they were “blowing up,” and lament purchasing larger clothing. A family member suggested I “eat for two” while handing me a pile of pizza on a plate, and then in the next breath, mentioned another pregnant relative who looked as “big as a house.” If I went to yoga, people blasted me with compliments—Wow! Look at you, still practicing!—while giving me the side-eye that said, “Does she know that it’s not really about *her* anymore?” It didn’t stop after my son was born, either. People asked what I planned to do to “get my body back,” and then told me I better take it easy. I heard, “You don’t even look like you HAD a baby!” which was nice but honestly kind of irrelevant considering I did actually push a babe out of my vagina.

Celebrities aren’t immune, either; if anything, their experiences amplify what occurs on the smaller homefront. Plus-size model Tess Holliday, who gave birth to her second child this year, was publicly slammed by critics who called her “too big” to have a healthy pregnancy. Scroll through the Instagram comments of Chrissy Teigen wearing jean shorts and a crop top a couple weeks after birth, and you’ll find a love-hate combination of “omg #goals” and “UGH, she sucks.” Finally, consider Jennifer Aniston’s recent Huffington Post op-ed wherein she lambasted the media for spending countless resources debating whether she’s pregnant or simply ate a big lunch.

Despite massive strides in body positivity over the past few years, I watched these messages play out in my life over and over again as I moved from a little girl to a young woman to a professional to a married adult to a pregnant lady to a mother. I observed. I listened. I paid close attention. And then I got pissed. Not only was this type of examination unfair, confusing and dangerous—it was also a fucking waste of time.

So at my highest weight, when I worked out the least and ate a billion carbs, while my entire body expanded and took up more space than ever before, I decided to opt out. I didn’t want to play the game anymore.

I declined the tantalizing spread of body image issues offered to me on a silver platter, and instead, determined that I would practice acceptance for what my body looked like right now. Not how it might in the future, not in comparison to how it did in the past, but from each present moment to the next with all the wrinkles and saggy parts and flaps of skin and taut angles and freckles and “too big” this and “too small” that. I imagined a light switch in my mind flipped down into darkness, and I snapped it upright into the light.

Self-love doesn’t appear in a day or a week or a month or a year. It takes time.

Doing the work of accepting my body in its present state is far from easy; I have good days and bad days like everyone else. Self-love doesn’t appear in a day or a week or a month or a year. It takes time. I had to wait out the unnerving moments when my old issues popped back into place, and have the patience and wisdom to pause and say, “Wait, wait. This is false. I’m all right.” When I started comparing myself to someone I deemed thinner, prettier, better—it was on me to bring my hand to my heart and say kindly but firmly, “Stop that. Don’t do that.” One of the most subversive things I’ve done is to stop waiting for someone or something to tell me I’m okay just the way I am. I know this, and then I forget, and then I remind myself. This work matters. Relieving myself of the pressure to constantly care about my weight and size opens the door to freedom, to the opportunity to focus on arenas of my life that are more valuable, more important, and more fulfilling than what I look like.

If you’ve forgotten this fact, and you need a reminder, I offer one to you today: You are already strong. You are a caretaker of a body capable of amazing feats—your heart beats! Your lungs fill up with air! Your legs move you to and from places!—which means that your body is your friend, not an enemy meant to be defeated at the first perceived failure. Opt out of the lie that says your looks matter most. Take up space in this world, because what you weigh holds no weight in terms of your worth.