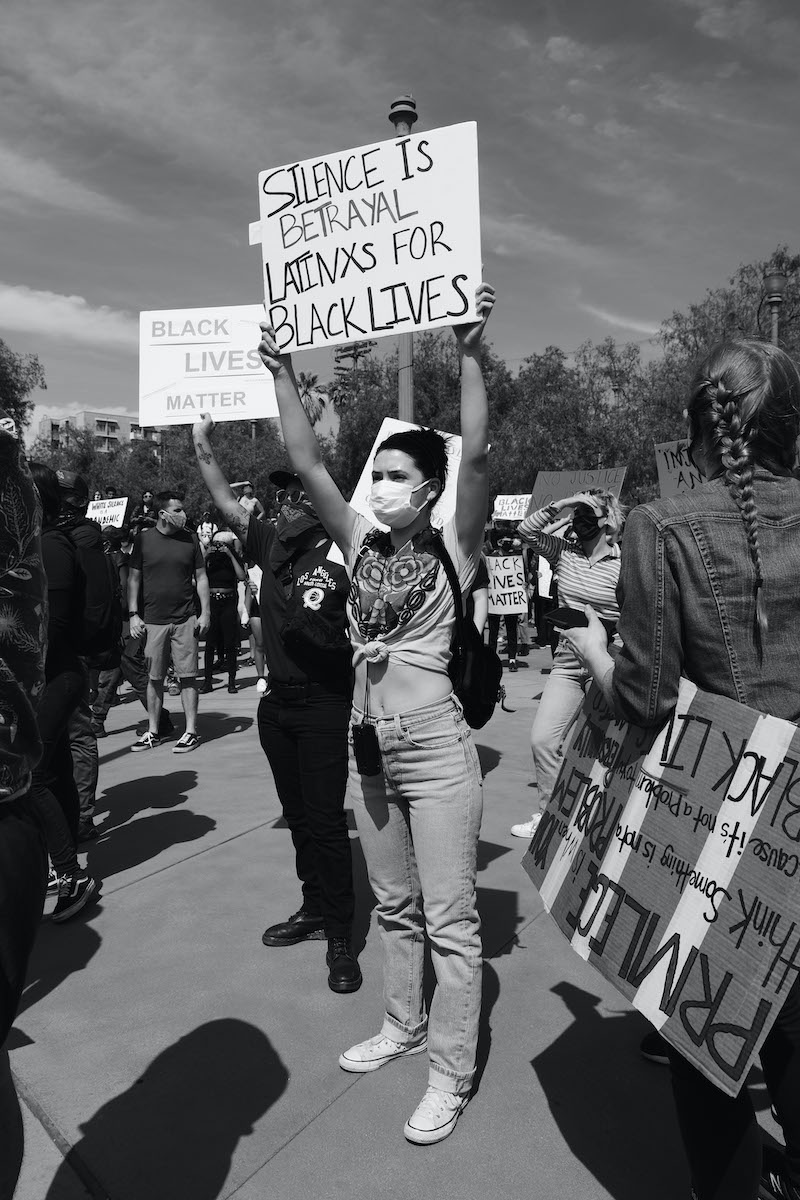 Just because we are POC doesn’t necessarily make us more “woke.” There is Black racism within our own Latinx community. The Afro-Latinx experience is different from moreno, mestizo, or white-presenting or passing Latinxs. Latinxs are a beautiful, diverse ethnic group; we can be white, Black, indigenous, or other races.

Yes, we have a lot of our own pain and struggles as Latinxs living in the United States, which should not ever be forgotten or brushed aside, but we cannot make the Black Lives Matter movement about us. As non-Black POC, it is important that we refrain from centering ourselves in a movement that deserves our support, but is not about us and in which we are not an authority. The protests are about supporting the Black community.

We do share a lot of common experiences and barriers to success with our fellow Women of Color: as a group, we earn less and are likely to be major breadwinners in our families.

We can actively fight against the racism of our families, friends, and peers—and within ourselves.“It is good to think of other people’s pain in relation to your own; that’s a good way to develop empathy—period,” Danielle Prescod, writer, style director at BET.com, and activist said.

However, we must recognize the unique, immeasurable differences and unfathomable pain the Black community experiences, which the non Afro-Latinx community does not. It might feel tempting to jump into a conversation, Twitter thread, Instagram comments, or DMs about Latinx or BIPOC/POC suffering as a whole in an attempt to demonstrate empathy or create intimacy, but this reads as undermining their pain and the #BlackLivesMatter movement. Trust me: I made this seemingly innocuous mistake, and I got checked.

In this moment, we can try to understand that Black people may need to set boundaries on their emotional and educational labor. They are being hit up on all sides and Latinxs do not need to add to that burden—I learned that first-hand while writing this very story. Like the white community, we must also be proactive, educate ourselves, and do our own research. Learn from these Black writers, activists, influencers, and community leaders on what the non Afro-Latinx community can do to help the Black community—both now and indefinitely.

Make sure to vote

“I honestly believe that people don’t believe [change] is going to get done by the leadership we have now. It is so important for Latinx to vote to make change. It’s important to provide people with resources and information to make a decision.”

“Raising awareness through word of mouth on social media. Leaving positive reviews on e-comm, social media, and with the Better Business Bureau. Have more patience and grace when a small business messes up. We’re all fighting for the same cause, inclusivity, and rooting for minority success.”

Educate and read to your children

“Teaching children how to enact positive change through activism is very important right now. There is a correct way to protest against discrimination. [My children’s book] My Life with Rosie: A Bond Between Cousins shows children how to do this by sharing the story of Rosa Parks and her dedication to teaching youth how to properly advocate for human rights.

Parents: Spend time with [your] children teaching them how to properly protect human rights by teaching them the history of well-organized protests like the Civil Rights Movement, the East L.A., 1968 ‘Walkout,’ the day high school students helped ignite the Chicano power movement, and the Chicano civil rights movement—these movements brought great change and in many cases, Blacks and Latinos worked together to enact change. If any two groups can understand each other, it is African Americans and Hispanics—together they are a powerful force.”

READ: 33 Books Featuring Black Heroes and Characters That Every Kid Should Read 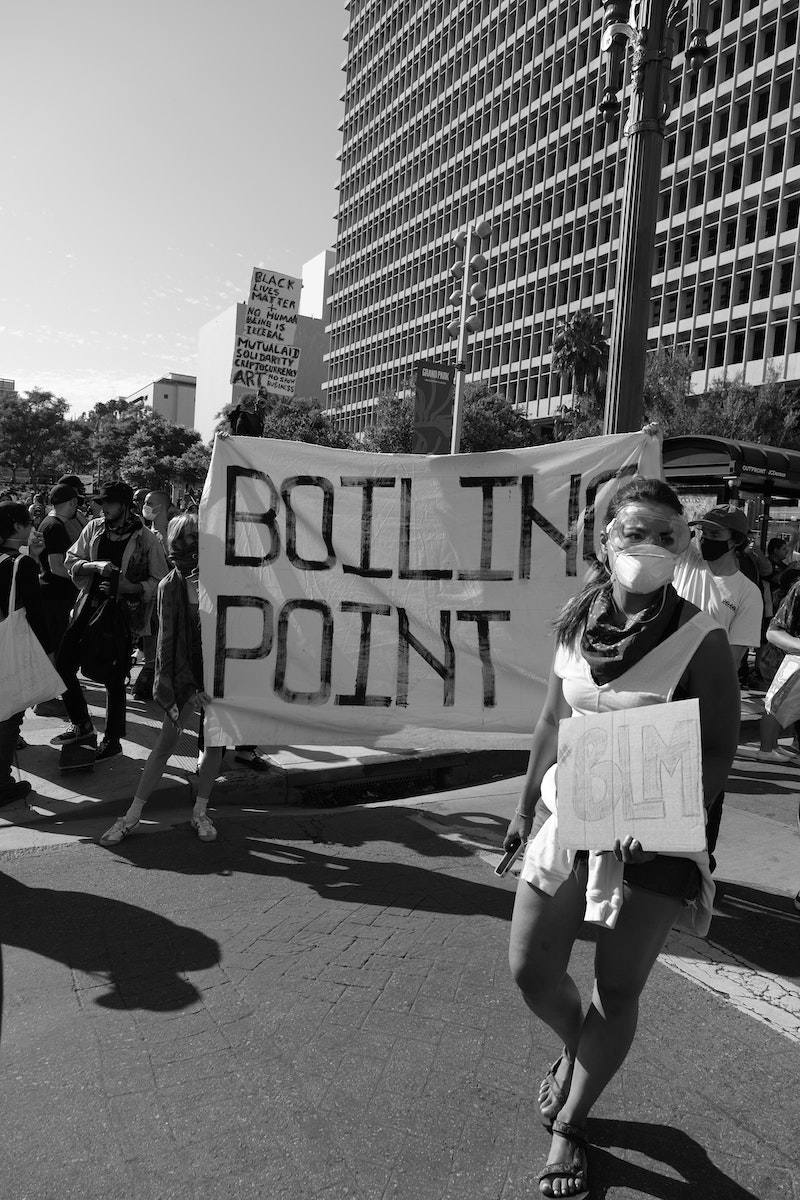 “Create a safe environment where everyone can feel human. Kitchen culture is hard. I was the youngest person (and only woman) in a lot of the [predominantly Latinx] kitchens I ran. Latin culture can be very masculine. I had tough times managing Latin men because of machismo. Me being this 20-year-old Black girl telling a 40-year-old Latino man to do something was difficult. But I learned the language, music, and created an energy where we had common ground.”

“[Latinx] support is different from what I would tell a white person, because as another oppressed community, they don’t have the same entitlement… but they do have certain biases. I encourage you to look at that, the media you consume, your celeb crushes, and who you care most about.”

“Every protester should know what the message is BEFORE participating in the protest. During the Montgomery Bus Boycott, Civil Rights leaders met with protesters BEFORE and made sure each person protesting understood the goal of the protest, and all protesters, including youth, were provided leaflets to hand out so the message was clear. Many protesters today mean well, but they do not know or understand the message before going to protest. If you are protesting on behalf of Black Lives Matters, then go to the organization’s website to understand their mission and goals before hitting the streets.”

“The injustices towards both groups are too myriad to count, from the United States stealing land from Mexico to determining that enslaved ‘Africans’ weren’t even people. In many ways, the fight for civil rights in the 1960s runs parallel to the fight for just labor practices that would emerge decades later in Latinx communities. History shows that the struggle for civil rights for Black people in the U.S. benefited Latinx people and other groups.” 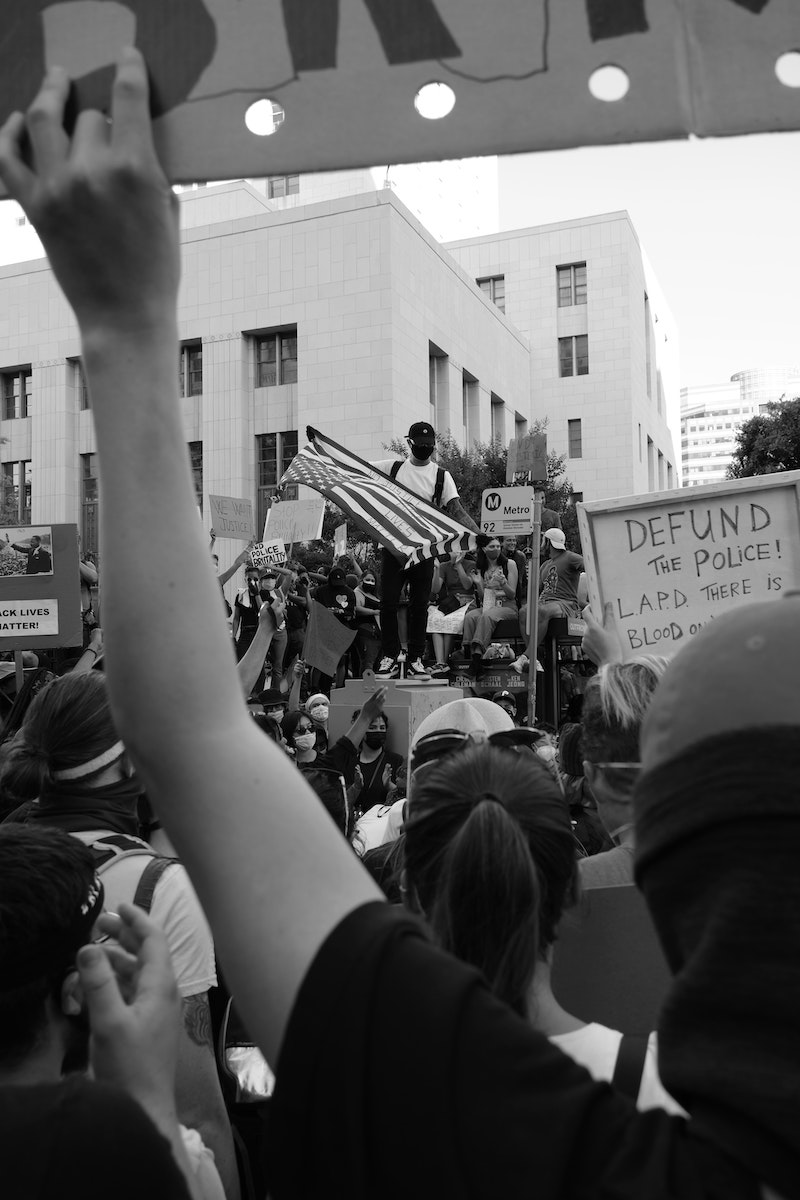 Address white idealization in your upbringing, within your family, and in your community

“I have many memories from my teen years when my mom would randomly tell me to seek a white boyfriend, ‘Hay que avanzar la raza’ (“We must advance the race”) she’d say. I didn’t know how problematic that was until I went off to college and started researching the history of the Dominican Republic and Afro-Latinidad. I’ve heard my friend’s grandma call her Black boyfriend ‘carboncito con ojos’ (“charcoal with eyes”) because of his skin color. The ignorance runs so deep within our community, I sometimes wonder if we’ll make a difference, but we just have to keep trying to educate and actively unlearn those racist ideals.”

“I was having a conversation with an older family member this week and I had to inform them that they are Black. To them, that was a hard pill to swallow, because they were not raised to acknowledge their African roots. It’s simply ‘soy Boricua’ and that’s it. However, being Puerto Rican is a mix of African, Spaniard, and Taino descent—not just one.”

“By recognizing the diversity within their ethnicity and the role of colorism in terms of how people are treated. Anti-Blackness is an issue within the Latinx community because of colonialism and white supremacy; colorism remains one of the legacies of this history and should be discussed. By spending time openly addressing the beautiful diversity of Latinx communities, members of the community can better understand the nuances and harm of colorism. They can also be better equipped to call it out when in white spaces that erase the experience of Afro-Latinx people.”

“Local district and state representatives are the first line of defense. Many city districts hold open community meetings and panels that encourage public opinion. A lot of the time, decisions for cities are made without input because people don’t know or don’t show.

City planning and development are always a good place to start. Big developers are a catalyst to gentrification of city neighborhoods and bring with it a whole mess of problems. They will buy up land and property, which eventually changes the entire dynamic of a community, from home and rent pricing to education and pollution. Big moves break down the closeness of our communities. While some level of development is good, being a part of the process ensures that the Black, Latinx, and other cultural epicenters aren’t dismantled.”

Don’t get tired or shut down because you are afraid.

It’s easy to feel overwhelmed. Don’t get tired or shut down because you are afraid. The Black community needs people who are willing to sit through the discomfort as they’ve done all their lives. “… apathy is the worst emotion,” Prescod said.

So what to do if you misstep? “Immediately humble yourself. Don’t try to put excuses on the citation or deflect it somehow by something positive they are doing. While I am appreciating apologies, I am not here to absolve you of your past mistakes,” Prescod advised.

Racism, even with the Latinx community, is not going to be solved overnight. We need everyone to help.

“If you are rowing a crew boat and one person stops, then you’re just going to go in circles,” Prescod said. “We need everyone to row.”