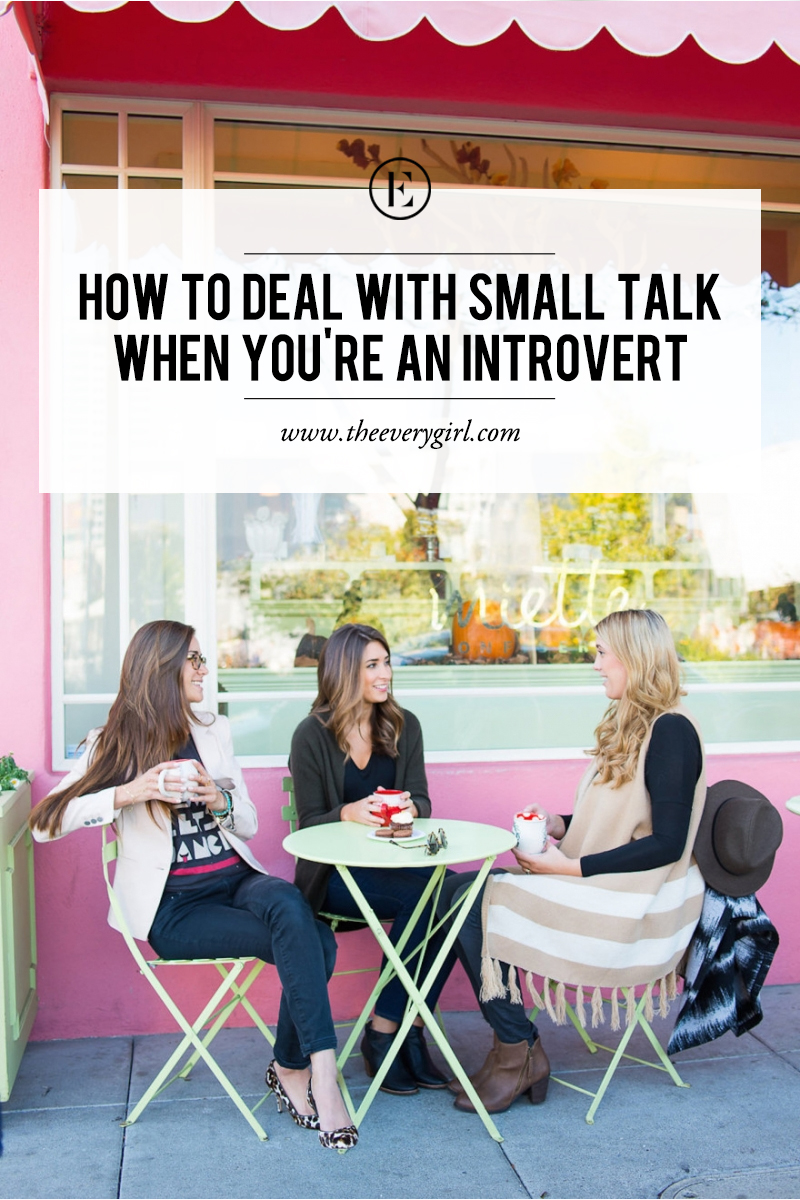 If you already think you’re boring and no one will want to talk to you, that’s exactly how you’re going to approach every conversation.

As an introvert, it’s easy to feel anxious when all the attention is on you. To deter that feeling, ask questions so the focus shifts towards the other person. People love to talk about themselves, so the best way to kick off the  conversation is by asking open-ended questions. This allows the other person to discuss their interests and background, which means you might also discover some common ground.

While hiding in the bathroom or playing with the dog at a party might seem like a logical alternative to small talk, it’s best to be proactive when it comes to your social anxiety. Don’t go into an event with a negative mindset. If you already think you’re boring and no one will want to talk to you, that’s exactly how you’re going to approach every conversation. Think positive, be true to yourself, and be confident. Most importantly, remind yourself of this: You really have nothing to lose.

When the spotlight is on you, don’t get flustered. Take a deep breath and remember that someone is engaging in a conversation with you because he or she wants to. To keep the conversation flowing, try to provide answers that are more than just, “I’m good” or, “That’s cool.” While you might not feel completely comfortable talking about yourself, stick to topics that are of interest to you and the conversation will flow more easily.

If you’re unsure on how to begin a conversation, or you simply ran out of topics to talk about, it’s always a good idea to compliment your conversation partner. A simple, “I love your dress! Where did you get it?” can ease the tension and allow you to engage in an easy free-flowing conversation.

5. Be aware of your body language.

Even if you think a conversation is going well, your body language might insinuate the complete opposite. Be mindful of how you position yourself when you talk.

Don’t beat yourself up if small talk doesn’t turn into a deep, meaningful conversation.

Turn your body to face the person you’re talking to, unfold your arms, and smile. Doing so signifies trust, which might encourage someone to open up more easily. Realistically, no one will engage in a conversation with you if you appear closed off.

Whatever you do, don’t beat yourself up if small talk doesn’t turn into a deep, meaningful conversation. It’s OK to engage in a two-to-three minute chat. Because introverts are introspective people, they tend to micro-focus on their faults and failures. Rather than replaying an event over and over in your mind, view it as a lesson, or learn to let the little things go by laughing it off and moving on.

7. Know how to excuse yourself from the conversation.

Let’s say you’re in the middle of a conversation with someone, but you’ve run out of things to talk about. You don’t want to be rude, but you don’t want the conversation to get awkward either. Don’t panic when this happens. Whether you’re at a networking event or a party, tell that person that you’re going to grab a refreshment, but you’ll speak to them later. Or if someone you know is standing next to you, introduce them to the person you’re talking to and politely excuse yourself from the conversation. Even though you’re probably a professional Irish exiter, these tactics are less awkward and more polite to do.

What “small talk” conversation tactics do you use? Let us know in the comments below!