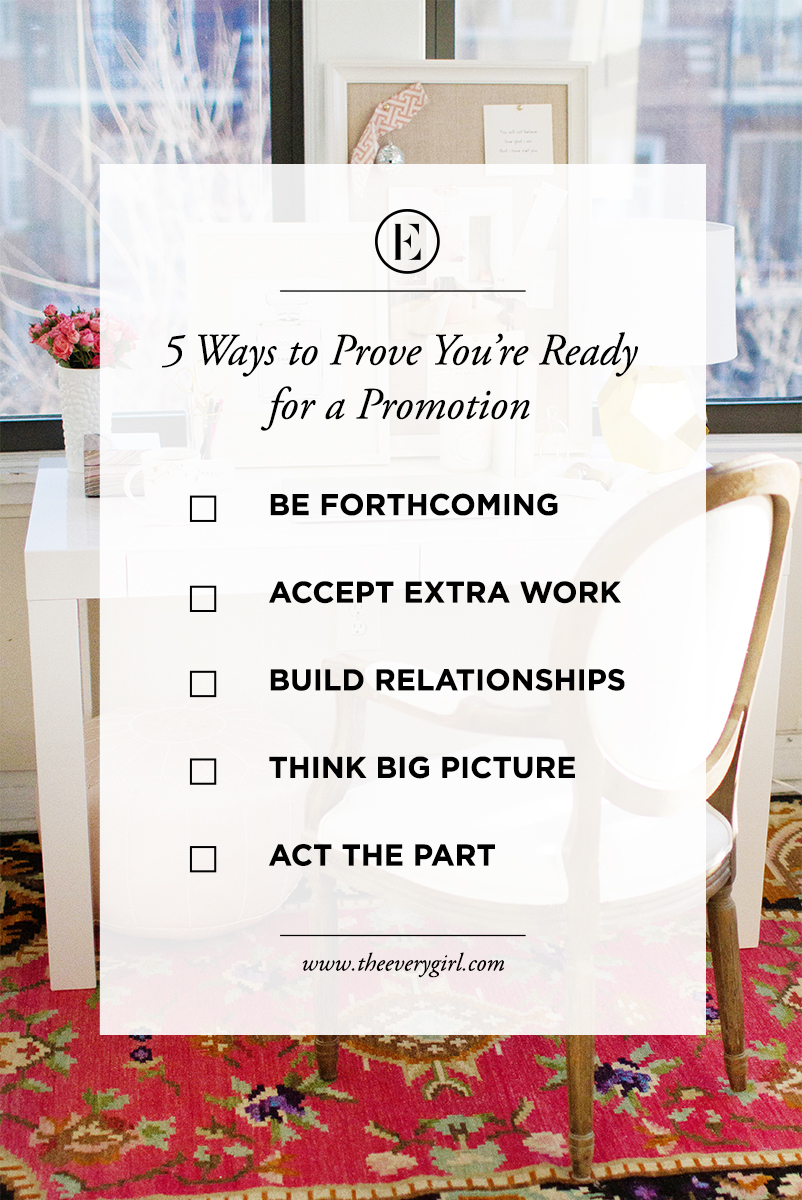 You’ve put in your time, paid your dues, you go above and beyond expectations, and you have a great relationship with your boss. So, when it’s announced that a position with more responsibility (and, ahem, higher pay!) has opened up, you feel like you deserve that next step in your career.

However, as you already know, landing a promotion involves a lot more than just that. Whether it’s a brand new role at your company or a position that’s been left vacant by an employee who’s moved on, climbing up a level will require a little work—beyond just crossing your fingers and hoping that your boss notices your constant and consistent solid work.

So, here are a few things you’ll want to do make sure you actually score that new position—rather than just dream about it.

While this first step might seem obvious, it’s one that’s often missed. But, it’s important—and, if you operate with the assumption that your supervisor can read your mind and is already in the loop on your long-term career goals, you’re only setting yourself up for disappointment.

If you assume that your boss can read your mind, you’re only setting yourself up for disappointment.

When a position opens up (or, even if you just want to have an honest and forthright conversation about your future and potential opportunities for growth with your company), it’s important that you make your desires clearly known to your manager.

In the case of a promotion on the table, clearly express your desire to be considered for the open role. After all, if you skip that foundational piece, the next few steps could be all for nothing.

Skating by on the bare minimum won’t get you promoted—but that much you already know. Instead, you need to prove you’re willing to roll up your sleeves and go the extra mile to get amazing work accomplished for your company.

If a project crops up that needs some extra hands, volunteer to step in (even if it means later nights for you). If your teammate is piled under an overwhelming stack of work, offer a helping hand. If there are a few things you can take off your boss’ plate to make her life a little bit easier, go for it.

Exceeding expectations is not only a great way to become known as an awesome employee, but will also ensure you’re remembered when upper management is combing through potential candidates for that promotion.

I’ll spare you the cliché lines like: “It’s not always what you know, but who you know.” However—let’s face it—in a work environment, this sentiment usually holds some water.

Being great at your job is definitely a large part of the equation. But, if you aren’t well liked by the people in your office (or even the people in your industry, for that matter), you’re going to have a tough time climbing the ranks.

This is why successful relationship building is crucial for earning that next step in your career. So, make sure that you’ve formed bonds with coworkers, management, clients, customers, or whoever else could have some influence in your future career (and career moves). After all, the more people that can put in a good word for you, the better.

Beyond just working hard, those that get promoted are the ones that tend to take initiative. They think outside the box and are always keeping the company as a whole—and not just their own individual positions—in mind.

Those that get promoted are the ones that take initiative.

Needless to say, demonstrating that you understand the bigger picture (and not just your piece of the puzzle) is necessary for showing that you’re worthy of some increased responsibility. So, if there’s a problem that you can solve or you identify a process that could be significantly improved or streamlined, don’t hesitate to speak up.

Yes, it might seem a little forward—and it’s all too easy to think that pointing out any shortcomings is a surefire way to get shown the door. But—trust me—the fact that you’re willing to be innovative and find ways to improve your entire organization is an admirable thing.

What does that mean? Always showing up on time to the office and meetings, dressing for success, and staying far away from office gossip are just a few of the ways that you can represent yourself as a qualified, polished professional who’s earned those next steps.

Nobody can blame you for eyeing up a promotion and eagerly anticipating the next phase of your career. However, just because you know you deserve it doesn’t mean that everybody else automatically assumes the same.

You’ll need to check a few other things off the list to up your chances of actually landing that coveted position. Put these five steps into action, and get ready for the next rung of the ladder!

When it comes to taking the next step in your career, which of these tips do you think is most important?