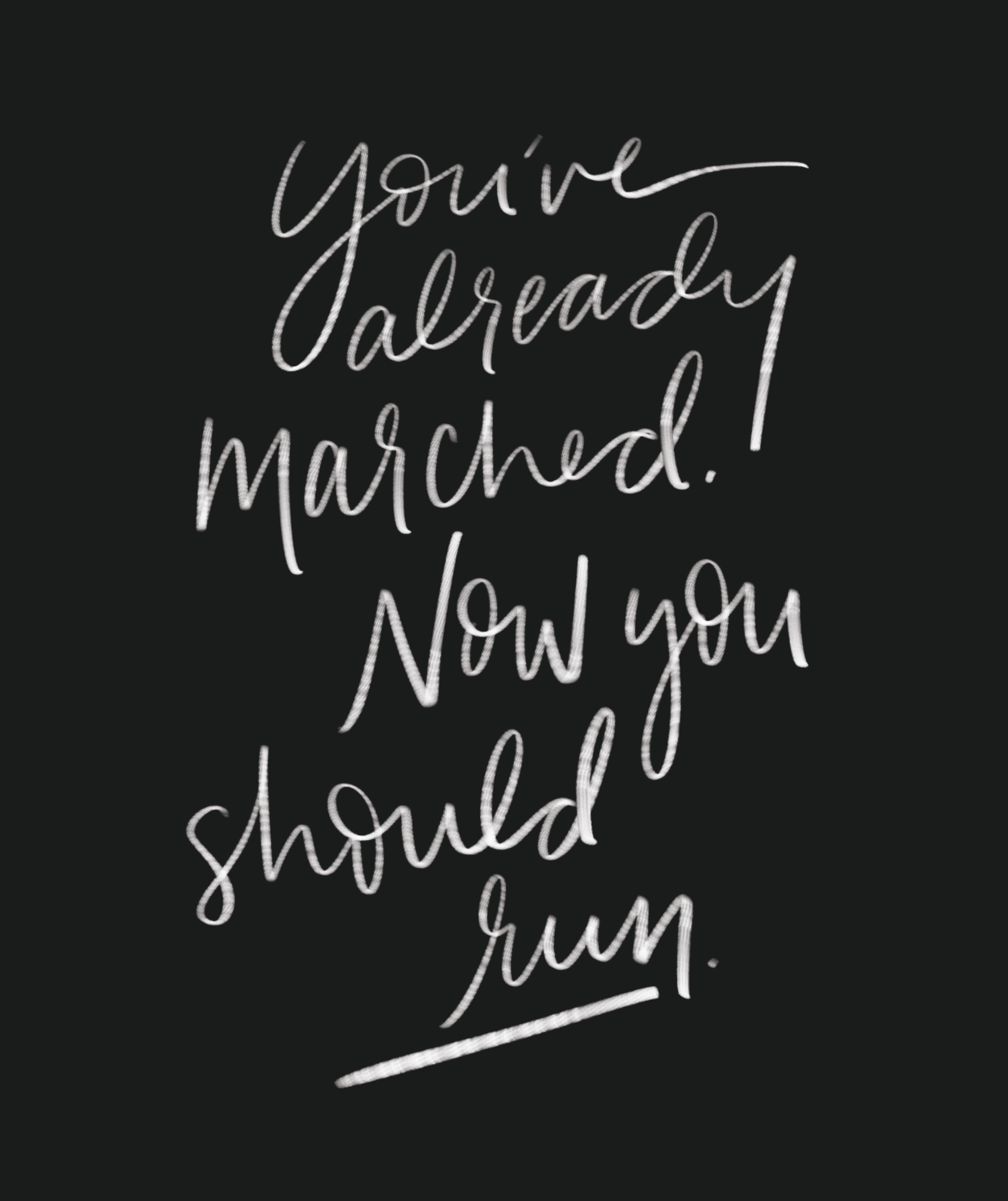 Even just thinking about how to run for office might make you break a sweat. Don’t worry, we’re hear to offer you some much needed encouragement — because we need you.

To the smart, powerful woman reading this right now: Run for office.

To the strong, resilient woman with a fire burning deep down inside her: Run for office.

To the hurt, angry woman who looks at her community and sees so much to be fixed: Run for office.

More women are running for office than ever before in our nation’s history, but it still isn’t enough. According to the Center for American Women in Politics, women hold just 19.6 and 19.5 percent of House and Senate seats, respectively. The number is slightly higher for state legislative positions, but still, depressingly, less than 25 percent. America only has six women governors. Six!

For women, the pipeline from “I have this crazy idea” to “I’m running for office” is leaking. There’s plenty in the way to make candidacy seem unreachable: Women are often the managers of their households or responsible for childcare, with less disposable time and income than men. Beyond that, we’re simply asked to run less than men are. A CAWP study shows that men are recruited more than women into political campaigns at every single level of government.

Women aren’t represented less because we’re losing races. Research shows we’re elected and re-elected at the same rate as men. When we actually run for office, we win.

And there are a lot of opportunities to run for office: 519,682 elective offices in the United States alone. Even more mind-blowing? Many of those positions are held by incumbents who are running unopposed over and over again, with literally no one to step up and challenge them.

I get that even trying to parse out how to run for office sounds intimidating, scary, and time-consuming, but it’s actually simpler and more straightforward than you might think. What’s more, there are many organizations out there specifically devoted to teaching women how to run for office — and offering them support and guidance when they do.

How to Run for Office

Get more info (and support).

Step one of how to run for office? Find the right people to help. Luckily for you, they’re not hard to come by. There is an army of organizations out there whose primary function is to get women like you to run for office. They’ll have trainings (in-person and online), coaching and mentorships, how-to guides, and articles galore to help you get pointed in the right direction.

This is a solid list of where to look first:

She Should Run offers nonpartisan online trainings to get women campaign ready.

All in Together works to elevate the voices of women from both major political parties and get them involved in politics, from running for office, to lobbying, to op-ed writing.

IGNITE is a nonpartisan group perfect for college-age women who want support pursuing a career in politics.

File the paperwork and qualify as a candidate

How you can actually qualify as a candidate in your race will vary a whole lot by state and city.  If you’re running at the local level — city commissioner, city council, mayor, and so on —  call your town clerk or county clerk (or check out their websites!) and ask how to get started. Going state or national? That information will be in a centralized location, like your state’s government website. A quick google search or call to your state’s government offices should get you there.

Pick your issues and start your movement

You’re running because you have a unique voice and you’re ready to make change. What issues are most important to you, but also most important to your community? What do the people in your neighborhood need more than anything else? Keep it simple by focusing your campaign on three or fewer core issues that can truly resonate with voters.

RELATED: 9 Ways To Get Involved in Local Politics

Crowdfund, fundraise, and make that money

While there have been cases of candidates winning elections on shoestring budgets, the general reality is that money is necessary to get your message out to voters.

Set a budget. Are you hiring a campaign manager, and if so, how much do they cost? How many mailers will you send out? How many business cards and yard signs will you have made? Then, start fundraising to meet that goal.

Fundraising is scary, but not impossible. In order to do it successfully, you’re going to need to overcome any qualms or weird feelings you might have about asking other people for money. You need to believe in yourself enough to look at someone directly and ask them to invest in you. After you’ve fundraised among your personal friends and family, take a look at the campaign finance reports on FEC.gov to find people in your area who have already demonstrated a history of political donations. Beyond that, Crowdpac (the Kickstarter of political campaigns) lets you crowdfund publicly for your campaign.

Get yourself out there

This is the most important item on this list. If you want to run for office, you need to be able to make polite conversation with strangers, and you need to be willing to pound the absolute heck out of the pavement.

Knock on doors to introduce yourself. It’s free, and it makes an impression. Print 5,000 business cards and hand them out in the areas you’re running — that’s 5,000 potential voters you’ve met face to face. Talk to people everywhere you go. Co-host events with other members on your party’s ticket. Write op-eds for your local media. Do anything and everything you can think of to meet the people who will end up voting for you.

You can run for office

I know it sounds daunting. It might even sound crazy. But the truth is there are thousands, if not millions, of other women out there who desperately want you to succeed. Other women who will donate to your campaigns, share your social media posts and, when the time comes, march themselves down to City Hall to cast their votes for you.