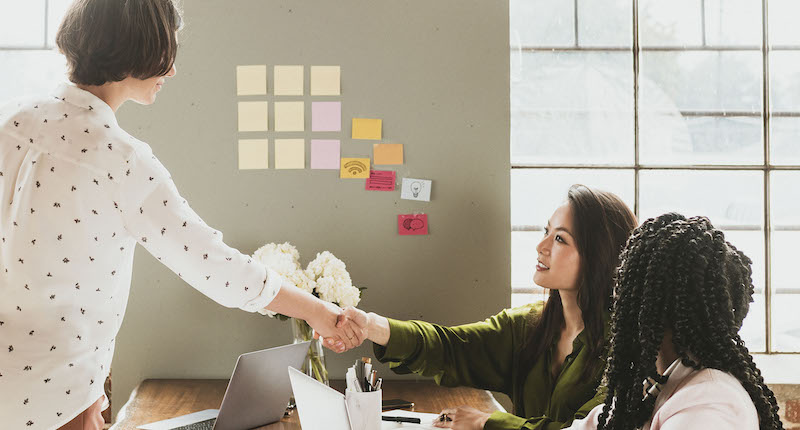 Due to a series of unfortunate events, I had done pretty much everything you’re not supposed to do in a job interview. It was one of those experiences where so much goes wrong that you can’t believe it’s actually happening—like a horrible dream you can’t wake up from. So when they offered me the job, I was utterly shocked.

I got lost on the way there, which made me five minutes late. I was frazzled, which made me look unprepared. The situation made me unusually nervous, which made me look unqualified. I burst into the interview room completely out of breath from sprinting up the stairs, donning shaky palms, a sweaty forehead, and mascara-smudged eyes—you know, putting my absolute best foot forward.

Sometimes when the worst happens in a situation, you rise to the occasion and find an inner strength you didn’t know you had. Unfortunately, this was not one of those times, and the interview only got progressively worse. I forgot names, left out important accomplishments, blundered answers to prepared questions, and even floundered my way through the softball question, “tell us about yourself.” I left the interview undoubtedly sure of one thing: I would not get the job.

After the post-interview shock wore off, I decided I had nothing to lose by attempting to salvage the opportunity. Even after my hopeless first impression and competing against dozens of others vying for the same spot, I was offered the job in the end. Looking back, I probably wouldn’t have followed up as strongly had I not dug myself such a hole at the first interview.

Now, I’m a huge advocate for placing just as much effort into the interview follow-up as the interview itself. Here’s how I recovered from a bad interview and went on to land the job:

First item on the agenda? An apology. In my follow-up email to thank my interviewers, I profusely apologized and honestly explained the circumstances that led to my late, frazzled, and unprofessional demeanor. I acknowledged that I wouldn’t hire me either after our interview, but I wanted them to know the experience was an exception for me—not the rule. Next, I outlined all of the things that I wasn’t able to eloquently express in my interview. I detailed why I wanted the job and why I would make a great hire.

Next, I went back the following morning for an in-person drop in. While a face-to-face visit is a bit bold, I wanted to express my enthusiasm for the position and leave a positive in-person impression before they determined next steps. I brought copies of my portfolio for each person that I met with, as well as handwritten, personalized thank you notes. To show I did my homework, I made sure to include personalized ideas for each contact.

I spoke with everyone

While stopping by, I made sure to speak to everyone that was in the room interviewing me—not just the hiring manager. I knew the position would overlap with several departments and that developing those relationships would be a big part of the role. Not to mention, I figured it wouldn’t hurt to form as many contacts as possible while job searching.

Once I secured a second interview, I was given a mock assignment. Jumping at the opportunity to prove myself on paper, I included a framework for how the assignment could be executed within an overall communications strategy as well as examples of how it could be repurposed for other marketing channels. While I did make sure to follow directions and complete the work exactly as assigned, I wasn’t afraid to pile on the ideas and additional work that would set me apart.

When I returned for my second interview, I brought copies of my new job game plan (an outline of what I planned to achieve in my first three months). This accomplished a number of things: it revealed how I approach workflow, it highlighted my overarching goals for the position, and it gave the whole room a concrete plan to dissect, leading to brainstorm discussions and team collaboration. Essentially, it provided a real-world opportunity to see what it might look like to work together, which is a much better representation of a candidate’s qualifications than an initial interview.