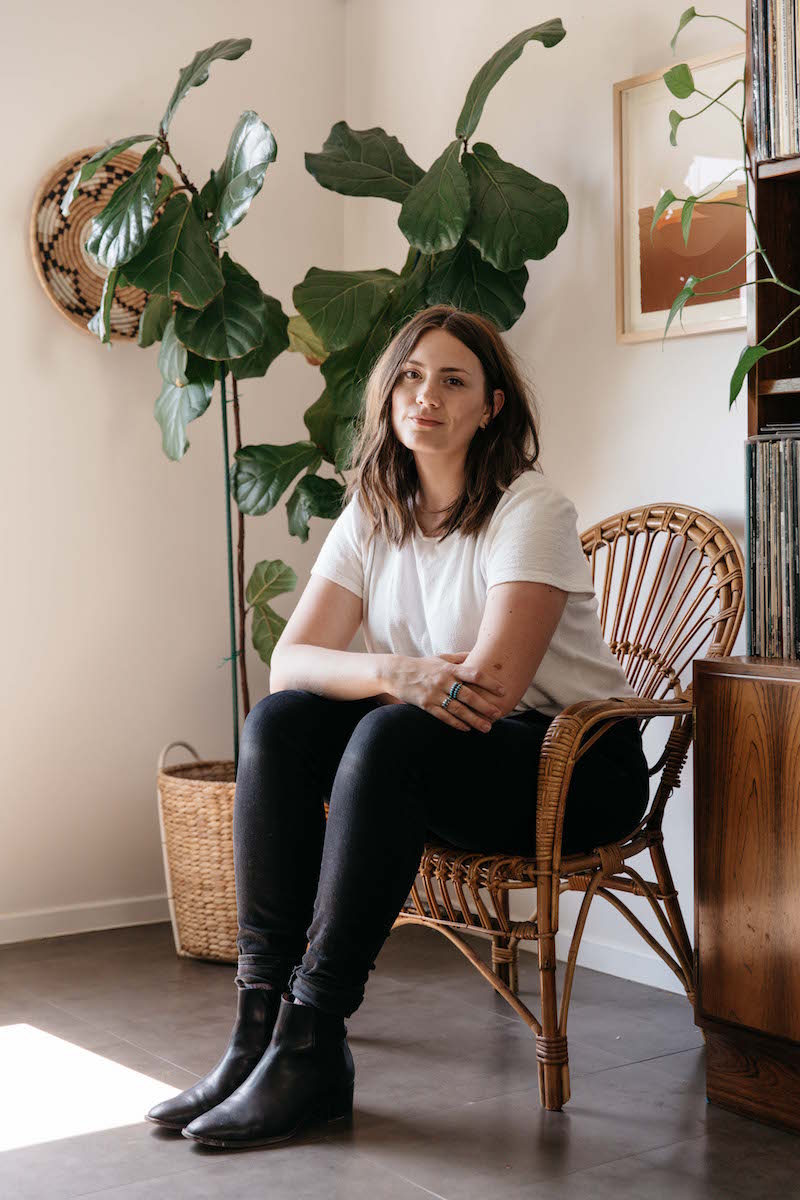 Isn’t it so crazy how a scent can transform your entire mood? Scents can vividly pull us into a memory, can impact our perceptions, and can change our moods. Scents are incredibly powerful — and great ones should never be inaccessible.

Kristen Pumphrey agrees. After beginning candlemaking as a passion project, her side gig turned into a full-fledged masterpiece — a thriving candle company providing the beauty of homey and delectable scents to homes and offices around the country.

To read more about Kristen, her story, and one of our absolute favorite candle companies (and the realm of business they’re expanding into next) read on.

What was your first job, and how did you land it?

My first job in high school was working as a sales associate at a Hollister. Did I just lose all my cred? Haha. I was basically scouted for this job in the mall. I had discovered the Hollister brand over the summer in a different city and thought it was some cool, surfer-y California brand, not realizing it was a preppy Abercrombie sister company. So I’m walking by a Hollister store that’s about to open in my hometown mall, and a manager was standing outside with a few staff members. She stops me and says “You! You’d be perfect for Hollister. Do you want a job?” I think it helped I was wearing a Hollister shirt — you can say I got the job because I was “on brand” hahaha. I worked there for a couple years, but my favorite memories of it are doing the overnight shifts during the holiday season, because I could wear black jeans and listen to whatever music I liked. 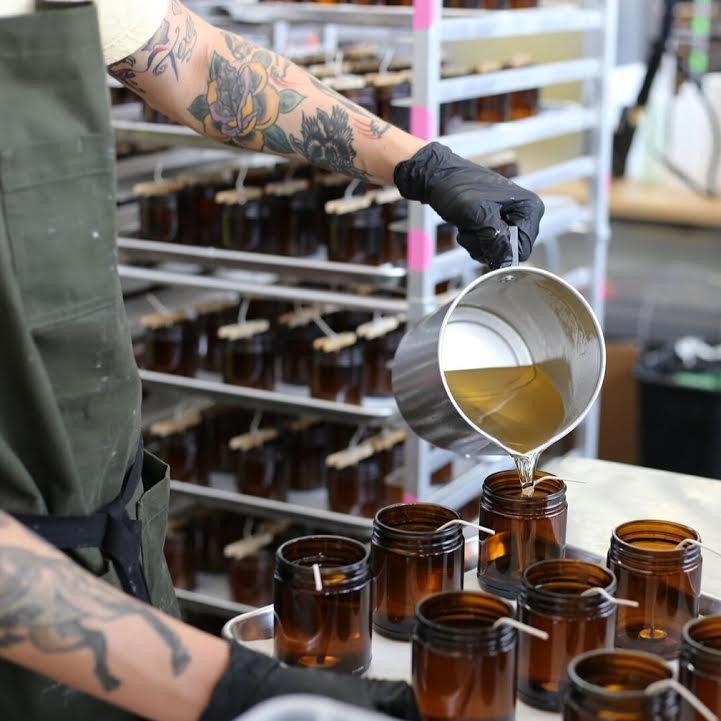 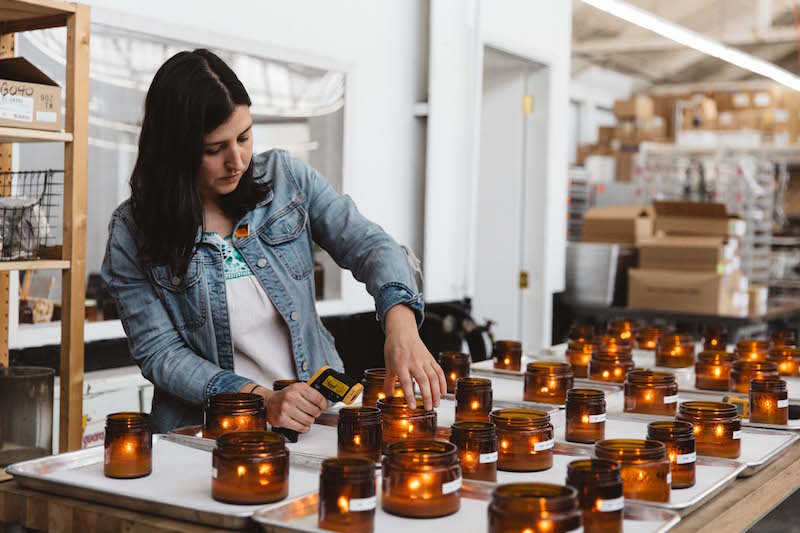 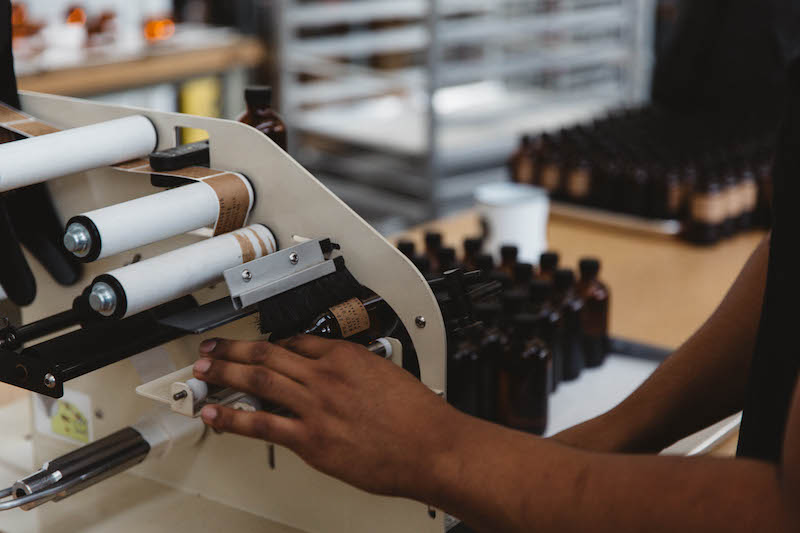 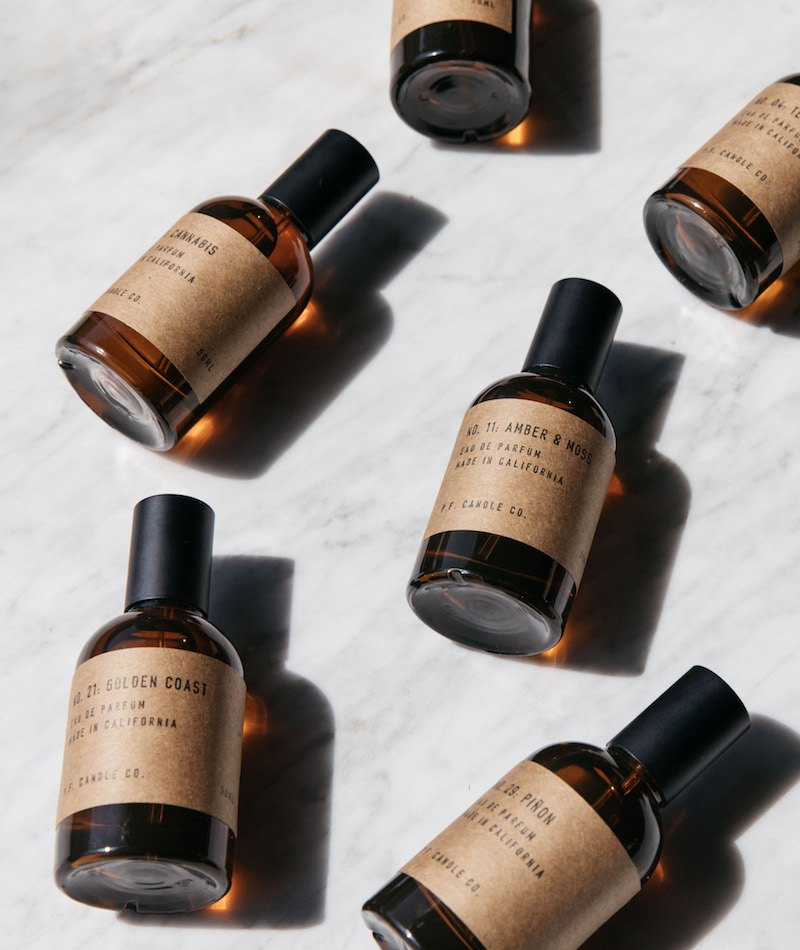 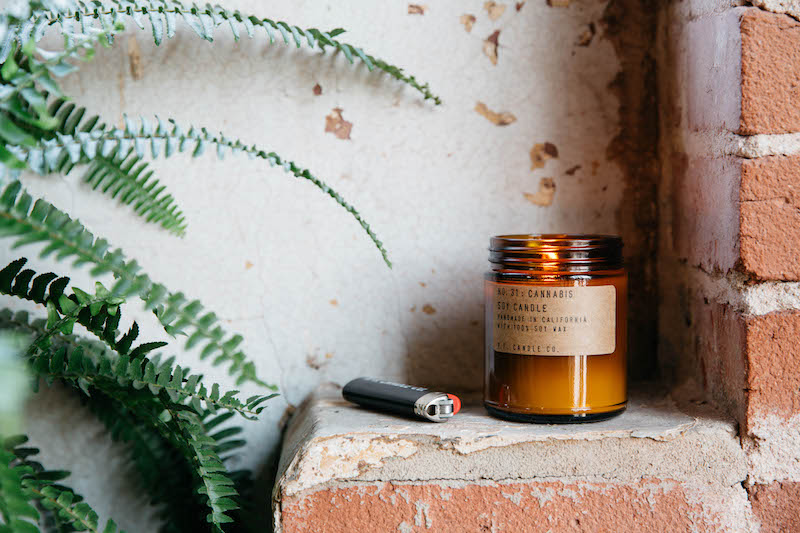 P.F. Candle Co. began as a passion project, but now consists of over 30 employees with a factory and offices. Tell us about the trajectory of P.F. Candle Co. and its massive growth.

Yeah, it’s been kinda nuts! The business really started taking off in 2013. Up until then, it was just an Etsy shop and we’d do pop-up markets around California (or Texas).

I had a big order on the horizon from West Elm, and Tom, my husband and now business partner, said he would help me make the order if I got it. I pursued the order for months, and finally, got that PO (purchase order) — but it was 4,000 pieces, more than I had made in the lifetime of the company, let alone in a couple months. Tom and I got back from our honeymoon, did a bunch of markets to save up some capital for the PO, moved to downtown LA, and delivered that order… maybe a couple weeks late.

We started hiring in 2014 when we landed some major accounts like Urban Outfitters, CB2, and Madewell. Though our independent boutique accounts have always been the backbone of our business, and still are. By 2016, we were a team of 25 working out of an 11,000 sq ft facility in Boyle Heights, just East of downtown LA.

Now we’ve just moved to Commerce, a few miles over, in a facility that’s 22,000 sq ft, with little atriums inside for some nice greenery and a mobile boutique trailer parked on-site.

Tell us about hiring your first employees. How was that process for you, and what did you learn from it?

The first people I hired were friends. That has its pluses and minuses. On the plus side, those people have your back and sometimes let you pay them in pizza in exchange for labeling some candles. On the downside, your relationship changes when you become their “boss.” What I’ve learned over the past four years of hiring is that beyond making sure the person can do the job, it’s important that you click. Having people on your team that you love and get along with keeps it fun and interesting.

What I’ve learned over the past four years of hiring is that beyond making sure the person can do the job, it’s important that you click. Having people on your team that you love and get along with keeps it fun and interesting. 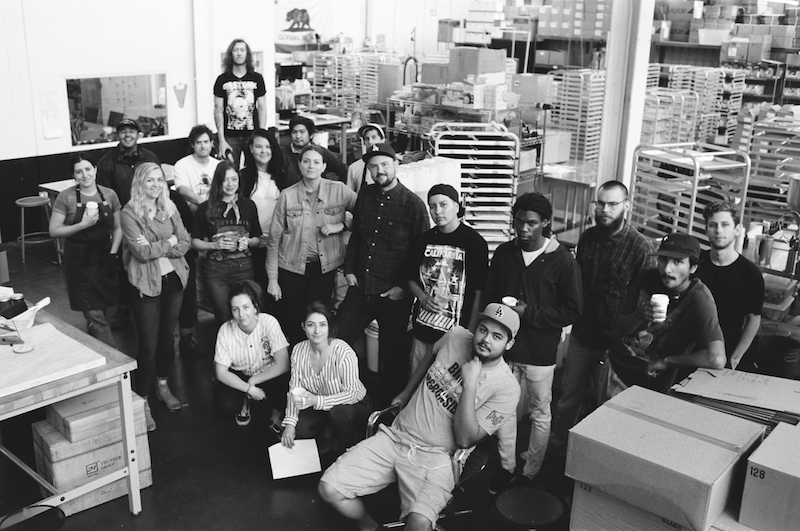 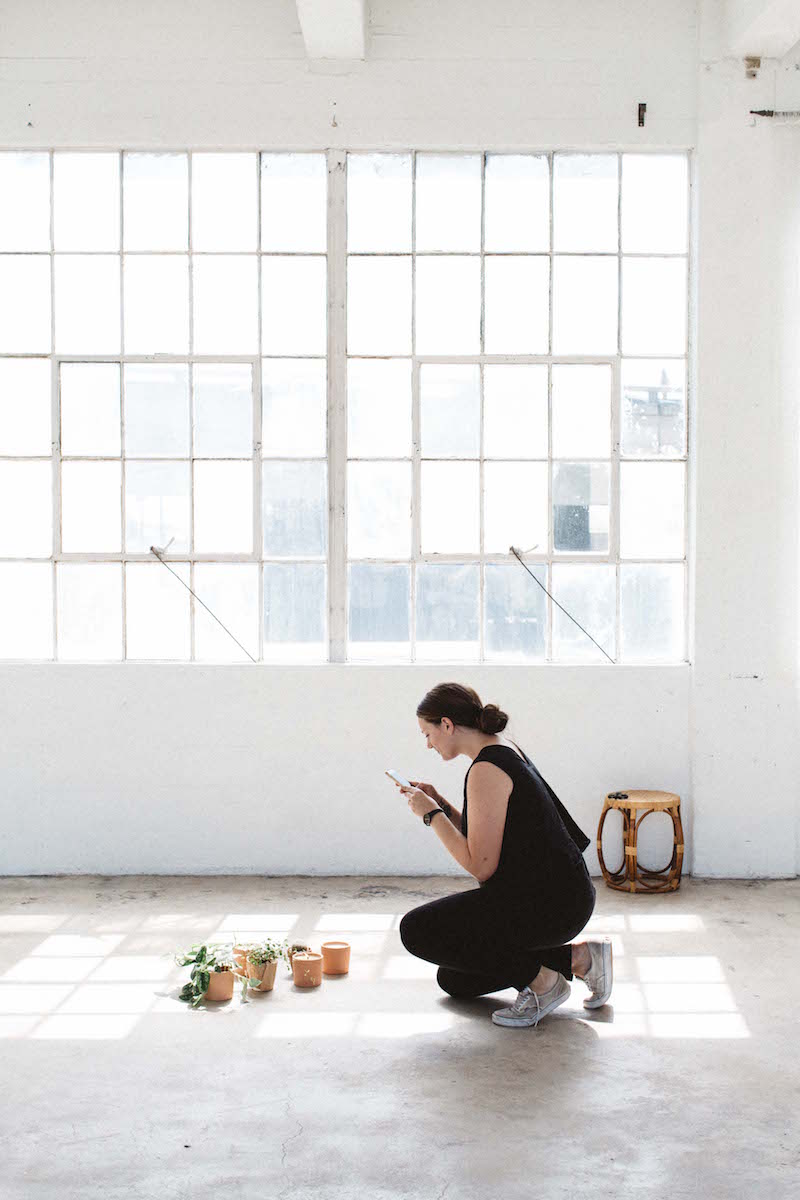 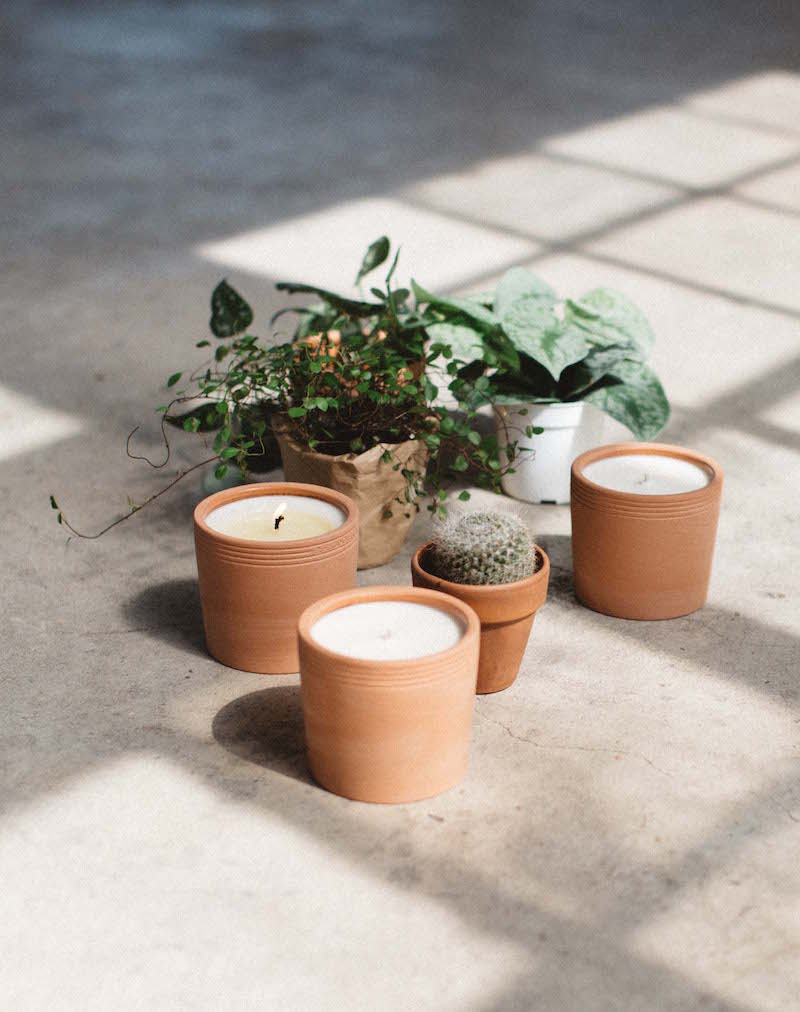 You not only have a large team of employees — but you also own a factory as well! Why is it important to you that all of your products are made locally in California?

My company was born out of the maker movement — making it here in California and knowing who makes your products is a way to vouch for quality. We’re also supporting the manufacturing industry here in Los Angeles, which historically has been very strong — a lot of people don’t know that. We’re keeping that going, just with great working conditions.

What led you to move from Austin, Texas to California? What do you love about living in California?

I like to think it was destiny. In reality, Tom was finishing his degree. He got into some programs in Texas, but also in Southern California, where he was from. I’d wanted to live in California my whole life, so I feel like I just kinda wiggled my way over, slowly, from New York to Austin to California.

California is my favorite place in the world! I love the national parks, I love the mountains, the beach, the desert; I love our cities and especially in Los Angeles, the incredibly diverse population that lives here. You can go from one side of the city to the other and you’re in a different world. I’ve got a bit of wanderlust and love to move around, so LA is perfect for me, because instead of leaving a city, I just leave a neighborhood.

And I mean come on, the weather. It’s oppressively sunny, which is great for the winter blues. No mood lamps needed! 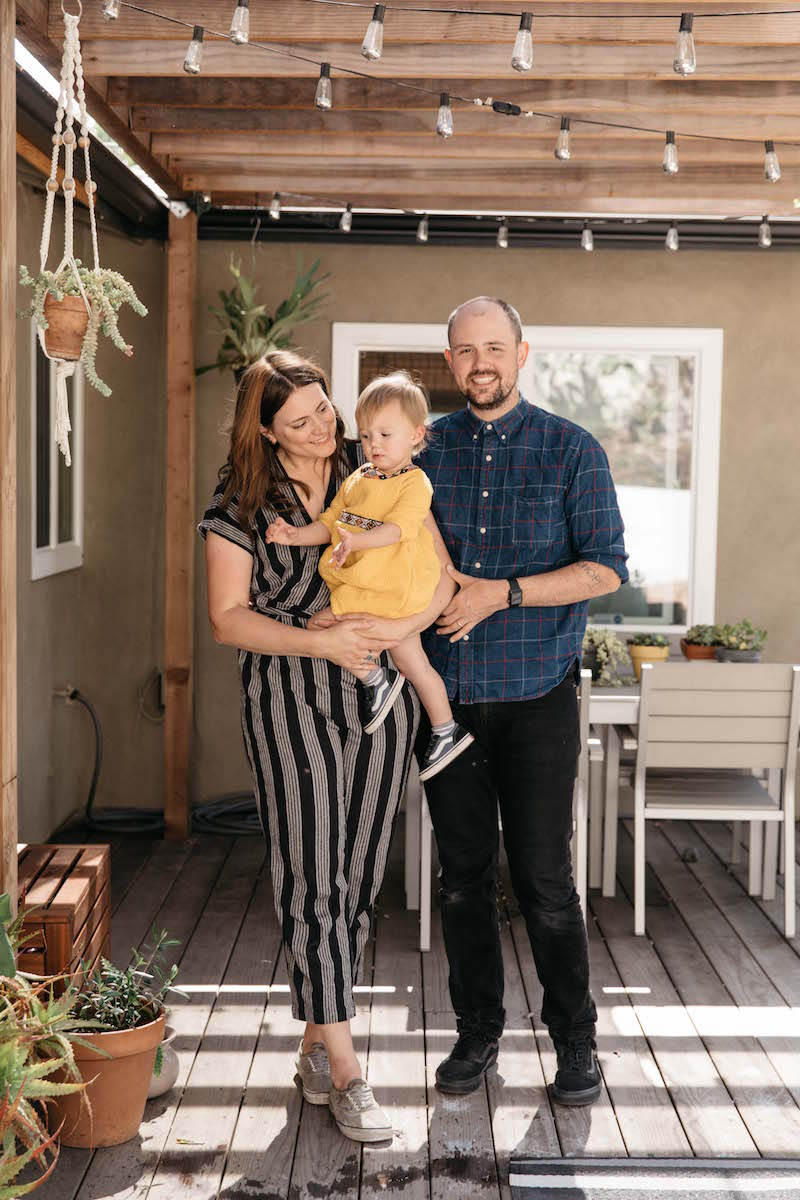 What’s the greatest lesson you’ve learned as a business owner?

You can’t give up. Maybe it’s because I’m stubborn, maybe a little foolish, but I just plugged away at P.F., trying different things, until something worked. It’s both a marathon and a sprint. You have to have incredible stamina. Become passionate not just about what you “do,” but about running a business as well. That’s the stuff that keeps me going. 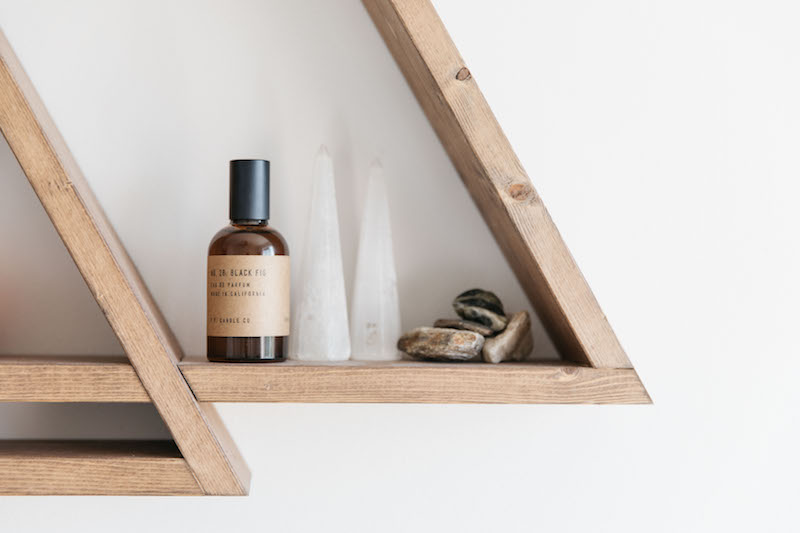 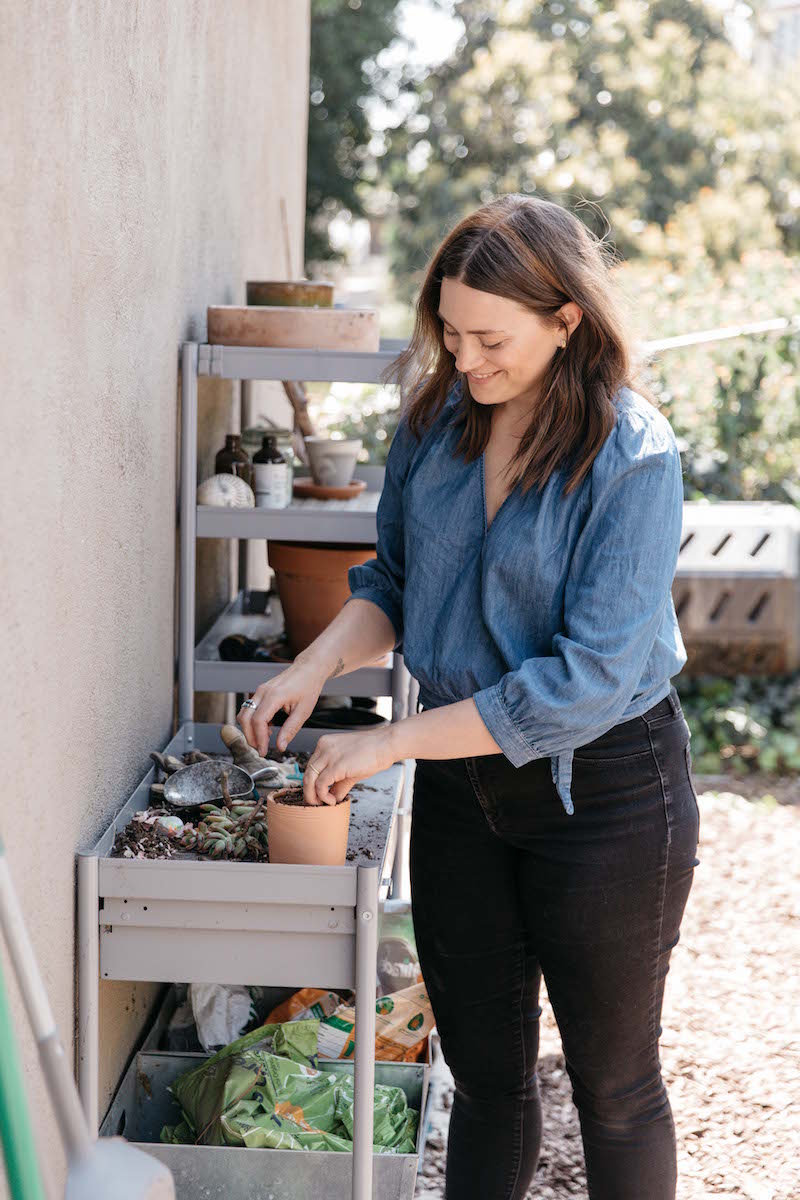 You can’t give up. Maybe it’s because I’m stubborn, maybe a little foolish, but I just plugged away at P.F., trying different things, until something worked. 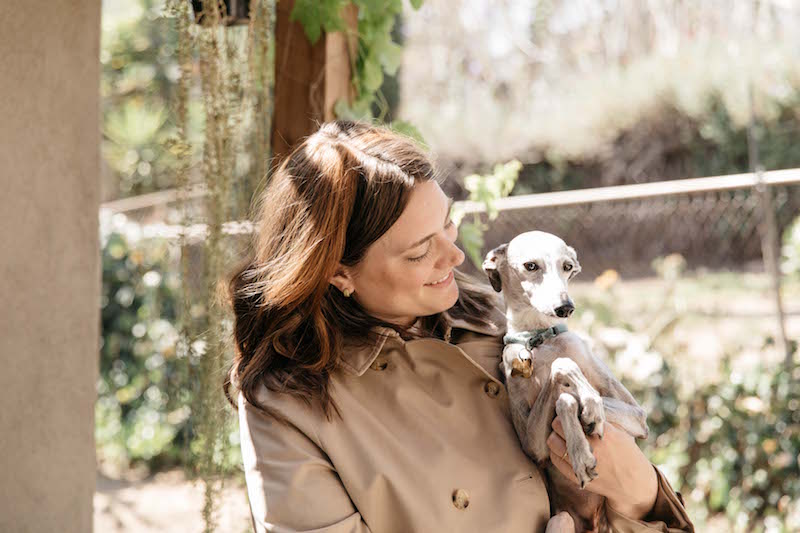 This year, P.F. Candle Co. is celebrating its 10th anniversary — congratulations! What professional accomplishment/milestone are you most proud of from the last 10 years?

Thank you! When I started out 10 years ago, I couldn’t pay the bills with this business. It’s not some industry recognition, but I am insanely proud that not only was I able to make the business work, but became self-sufficient, bought a house, and started saving for retirement (what???). Ten years ago, that was not on my radar.

What’s next for you and your company?

We’re currently expanding into a new arena: fragrance for your person! We’re releasing a new Eau de Parfum that has been highly requested on May 15th. I’m really excited about being able to wear my favorite scent every day. 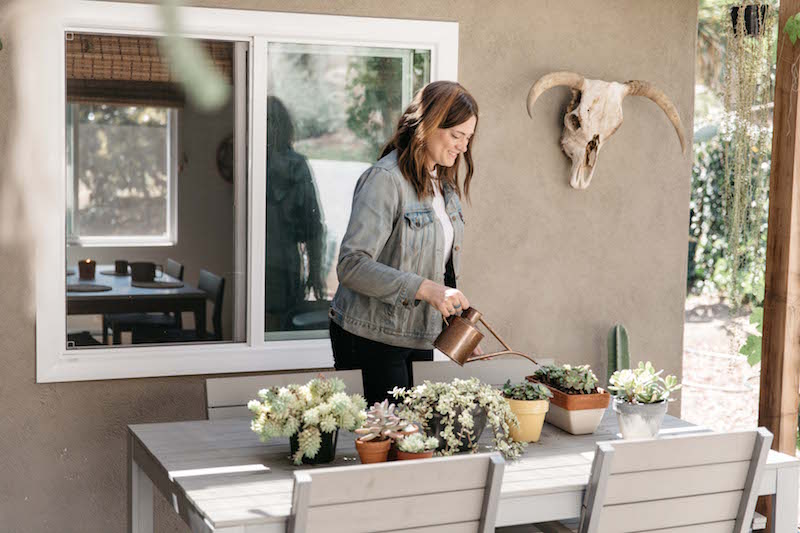 Which of your scents is your favorite?

I’m partial to Pinon, which was released in 2017, and Black Fig. Black Fig is so spicy and the perfect rainy day scent. It was inspired by the fig trees in my backyard. Pinon is really light, but crisp, so it’s a great everyday scent. We’ve actually just bottled both into wearable fragrance, launching May 15th. I’ve been wearing Pinon nonstop — it’s so nice to be able to take a little piece of home with me. 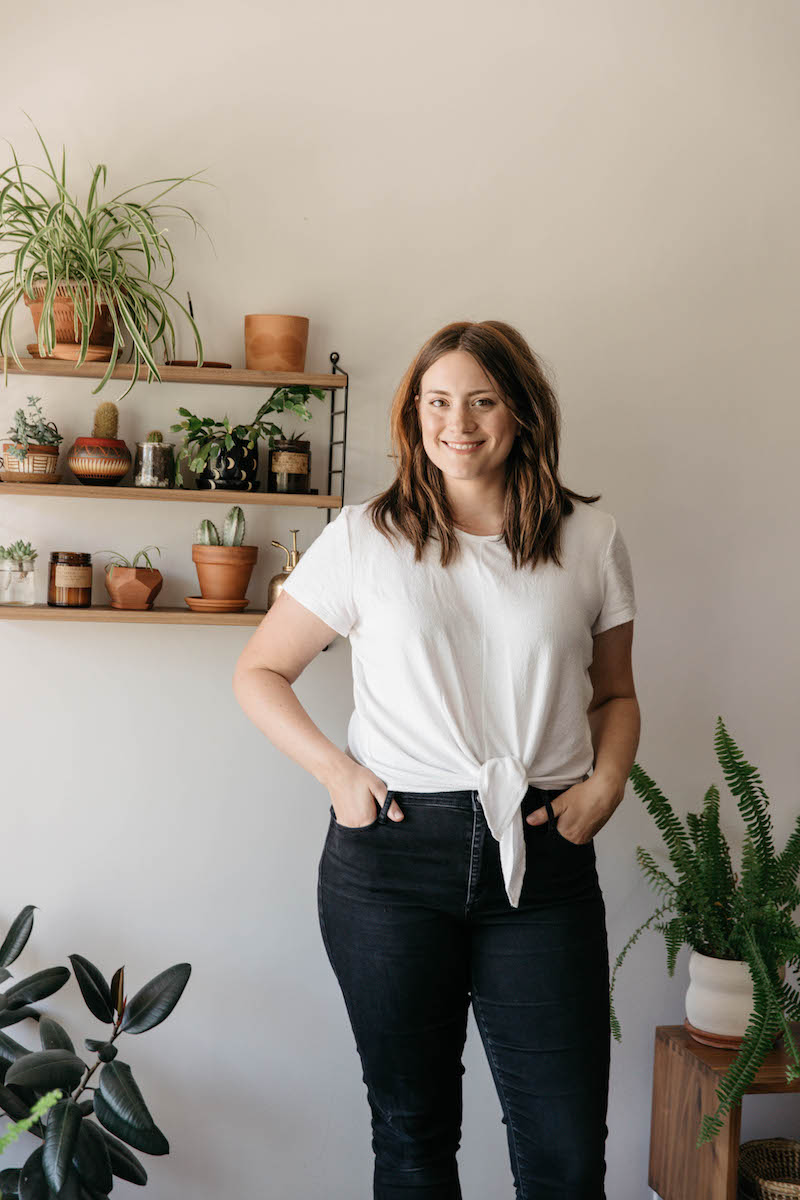 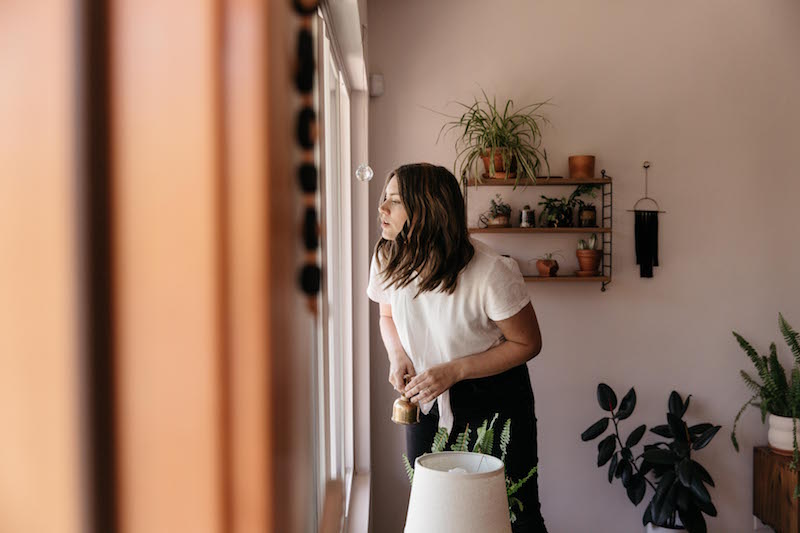 When I was preparing to move to Austin to start my business, this guy, who owned a bike messenger company, told me “just be prepared to eat a lot of beans.” I didn’t understand what that meant until we relocated to Long Beach, and I couldn’t get a secondary job to supplement the business income. Times were lean, for sure. We would eat beans, rice, and an entire onion, for substance. That “lean” mentality coupled with my pride allowed us to grow the business without any outside investors — and we still love to do things ourselves. It’s a bonus that it’s cheap.

What advice would you give to your own younger self?

So much of how we operate is out of fear. You’re scared to reach out about the job, you’re scared to put yourself out there because you’ll look foolish. That’s the type of thinking that holds you back. When you’re young, you have more wiggle room to make mistakes.

So much of how we operate is out of fear. You’re scared to reach out about the job, you’re scared to put yourself out there because you’ll look foolish. That’s the type of thinking that holds you back. 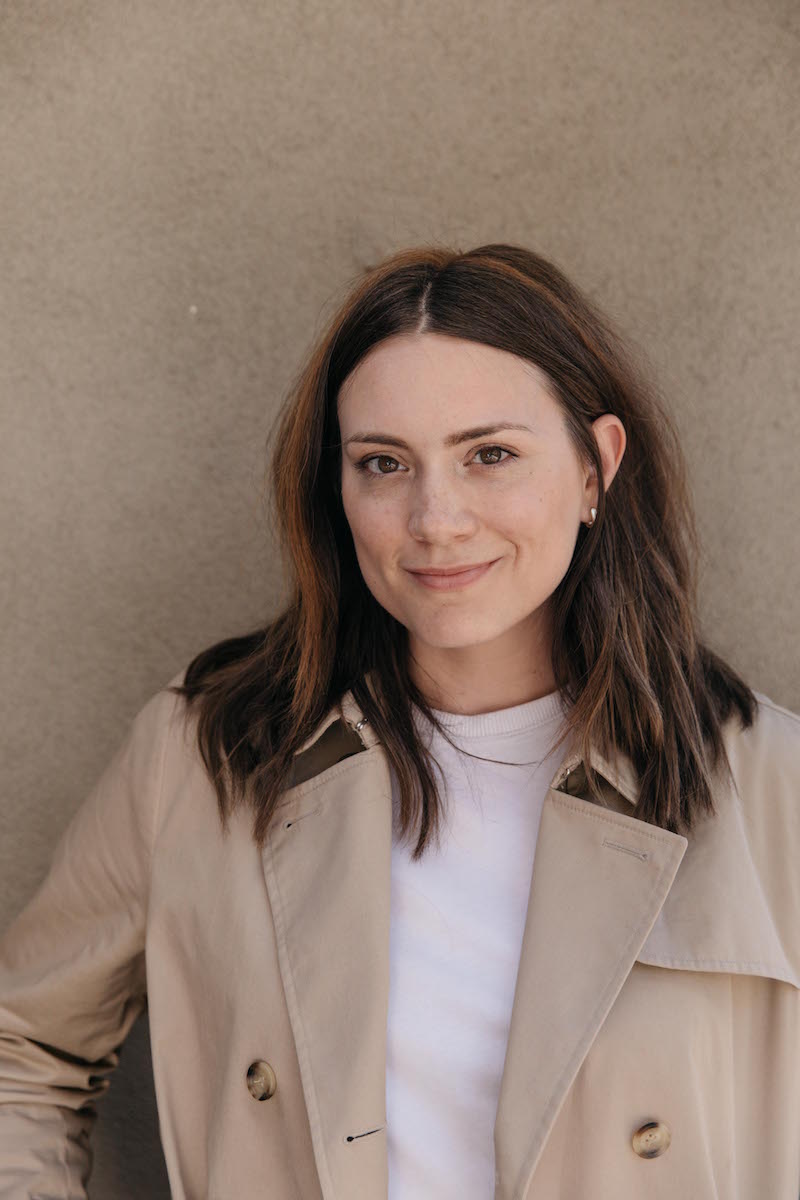 Kristen Pumphrey is The Everygirl…

Go-to dinner?
Quesadillas. I put roasted zucchini in them if I’m feeling like I need some greens in my life.

Any pets?
Yes! A cat named Seymour, who I’ve had since I was 19. He’s traveled all across the country with me and lived in seven different homes. We also have a dog named Max, who is the official pet of P.F. Candle Co. He comes to work with us every day and sits on the break room couch, looking for rubs and scraps.

Most commonly used app on your phone?
Probably Instagram. We now have a team of four people that run our officInstagramgram account — I basically had to pry myself away from it, because it would be the last thing I’d do before I went to bed (responding to DMs and comments) and I needed to stop obsessing.

Last show you binge-watched?
Currently in the middle of binge watching Love on Netflix. I’m obsessed with this show. The main character, Mickey, has excellent style.

If you could have lunch with any woman, who would it be and why?
My mom. I’d love to do a long lunch with just her and have her tell me stories. I think one of the best gifts you can give someone is a memory, and my mom is always pulling out new memories for me from my childhood. 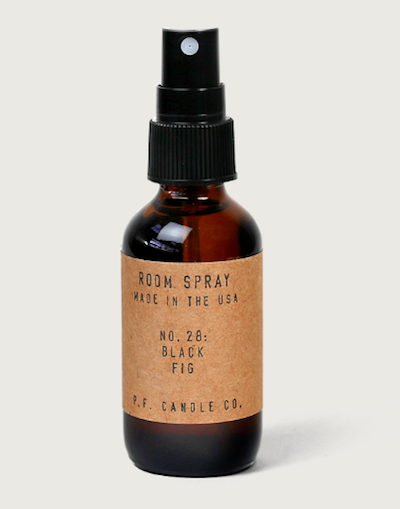 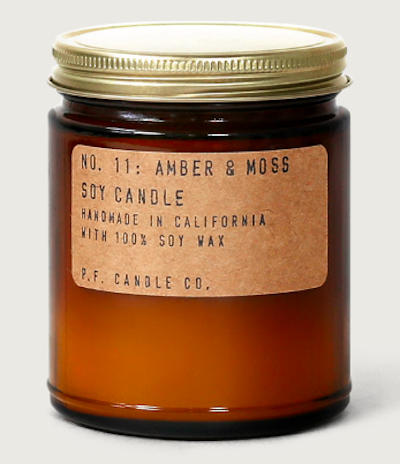 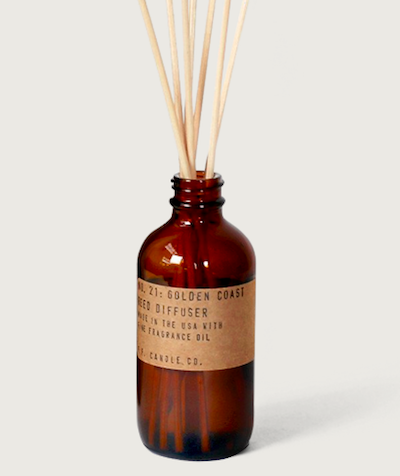