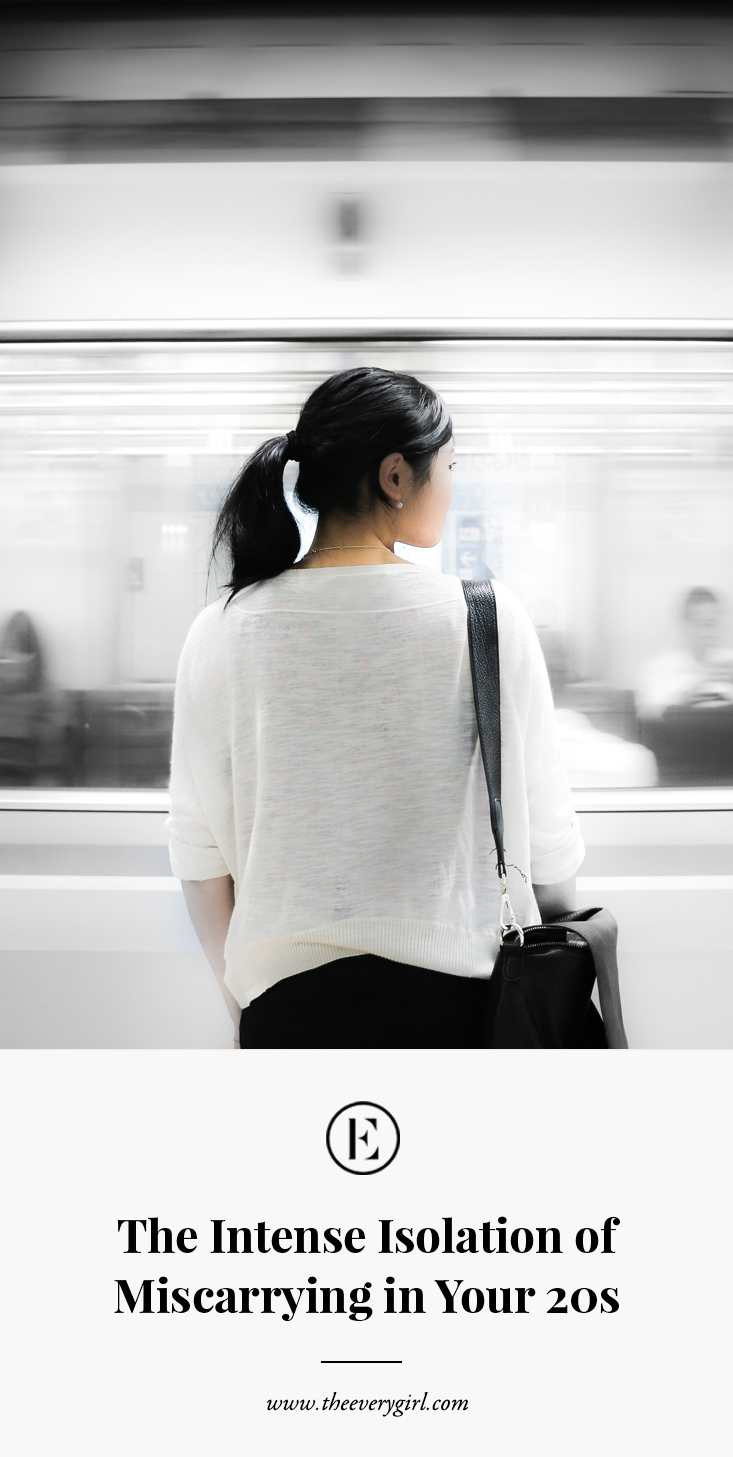 When I got pregnant at 29, I told myself the odds were in my favor. I knew miscarriage was a very real possibility, but I also knew my age put me in that fertility sweet spot. According to Dr. Amos Grunebaum, MD, women in their 20s have less than a 10 percent chance of miscarrying.

But sometimes statistics don’t matter: I ended up losing my pregnancy at nine weeks.

“Isolating” is a word that’s often used to describe the aftermath of a miscarriage, and it’s an accurate descriptor. A miscarriage feels a lot like an invisible loss — if you lose your pregnancy before you’ve shared the news of it, you’re essentially losing something most people never even knew you had. Add in the fact that miscarriage is still a sensitive topic, one that often doesn’t get discussed, and… well, it all adds up to create one seriously lonely experience.

If you lose your pregnancy before you’ve shared the news of it, you’re essentially losing something most people never even knew you had.

Especially when no one around you has been through it. Like many 20-somethings, I was surrounded by people who had never struggled to get or stay pregnant. My friends fell into one of two categories: They were either actively preventing pregnancy… or they managed to conceive and have healthy babies as soon as they started trying. Not fitting into either of those realms made me feel so alone and so misunderstood.

It seemed like no one around me knew what to say. One friend immediately began complaining about her own pregnancy right after she heard my news. Another told me I should start trying again right away so I could give her baby a friend. Most just told me they couldn’t imagine what I was dealing with… and they were right. No one seemed to get it.

No one understood that when you miscarry, you still have pregnancy hormones floating around in your system for weeks or even months. No one was aware that sometimes a miscarriage involves a surgical procedure called a D&C, which essentially removes the pregnancy from your uterus. No one knew that even if you do everything right, sometimes a pregnancy just doesn’t work (And no, I didn’t miscarry because I drank too much coffee. But thanks for asking.). No one could grasp the intensity of my grief.

Most just told me they couldn’t imagine what I was dealing with… and they were right. No one seemed to get it.

“At first I found comfort learning that it is much more common, and I eventually learned that some of my friends experienced a miscarriage, but they hadn’t talked to me about it before my own. A few of my friends also struggled with infertility, but sure enough, one by one, they all have gotten pregnant and fortunately had healthy babies. With each new friend’s pregnancy, I felt more and more alone,” Wagner said. “I was of course thrilled for them, but very, very sad for us. I’d wonder if we should eventually look for new friends who also don’t have children because our interests might be more aligned… I wondered if we should move away, or quit our jobs and focus on traveling and give up on starting a family. My husband has been an amazing support through it all, but at the end of the day it is me who feels the physical pain and emotional devastation each time I [feel] the cramping begin. It is extremely isolating.”

Pregnancy loss is absolutely gutting no matter when you experience it. Whether you’re 22 or 42, it feels like a part of you has been ripped out, like you’re walking around with a huge gaping hole where your baby bump was supposed to appear. But there’s something about miscarrying when you’re young — it can be that much harder to find someone who has walked in your shoes. And while you would never, ever wish a loss upon anyone else, weathering it alone is hard.

There are social elements at work when you miscarry before 30. Doctors tell you not to worry, that you have plenty of time to get pregnant again. The world, to some degree at least, expects you to still be a carefree 20-something who isn’t worrying about things like pregnancy loss. And if you’re anything like me, your social media feeds and IRL circles are chock full of women who sailed effortlessly through conception, pregnancy, and childbirth in a way that tends to be super common among younger moms.

My advice for other women who have experienced miscarriage in their 20s? If you’re feeling that isolation (and we all know you can feel it no matter how old you are), find your tribe. Check out a local support group for miscarriage survivors. Join an online group of other miscarriage mamas. Ask your doctor if he or she can point you towards a resource. The people in your life may not know what you’re dealing with, but someone out there does. And finding that person just might help you heal.

How have you found a support system during prenatal tragedy?