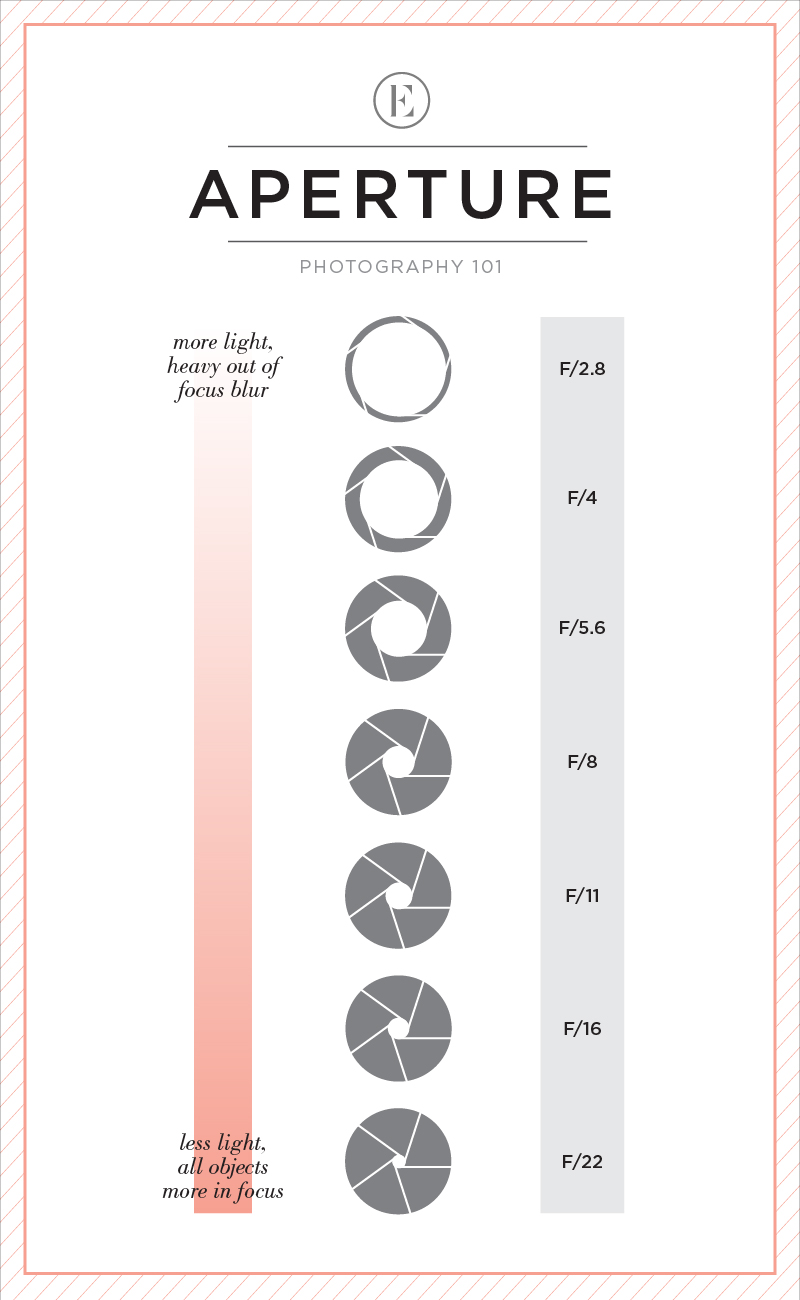 Aperture. The mysterious function on your camera that you’ve come across only a few times when you’ve accidentally bumped your camera into manual mode. And you promptly think, “Get me out of here! What is an f-stop?” Or you may have heard your photographer friend throw the word around in conversation once or twice. My sister has heard my photo jargon too much before and likes to remind me to turn my aperture on before taking a photo. You’ll soon learn after reading this that your aperture is always on—it’s always at work and it influences much about the look of your photo. Make sure you check out the rest of our Photography 101 classes, linked at the bottom of this post!

How is aperture measured?
We measure the size of the aperture’s opening in f-stops. And these f-stop values work inversely. To let more light into a larger opening, LOWER your f-stop. To let less light into a smaller opening RAISE your f-stop. For example, if you want to let a lot of light in, set your aperture to f/2.8. If you want to let little light in, set it to f/22.

Why would you want to let a lot or a little light into your camera?
Your f-stop affects exposure. Lower aperture and let more light in if you are in a low light situation (shooting outside at night or in a room with little natural light). This will help brighten your photo.

Raise aperture to let less light in if you are shooting on a sunny day. This will lower your exposure so no detail is lost in the highlights.

This was a very low lit room with no natural light. I lowered my aperture to let as much light in as possible to brighten the photo.

It was very sunny for this photo with the sun high in the middle of the day and lots of windows, so no detail was lost in the highlights. I used a higher aperture, so more was in focus.
(ISO 1250, f/11, shutter 1/200)

This photo has a wide depth of field, so everything is in focus.

This photo has a shallow depth of field for a dreamy effect with the mountains and background out of focus.

Now let’s apply what we’ve learned and see how adjusting aperture can affect a photo.

You’ll soon learn that there are many settings on your camera that influence the look of your photo: aperture, shutter speed, ISO. But really, there is nothing like getting to know the aperture. It can drastically change the feeling of your photo. Go ahead and play around with it!