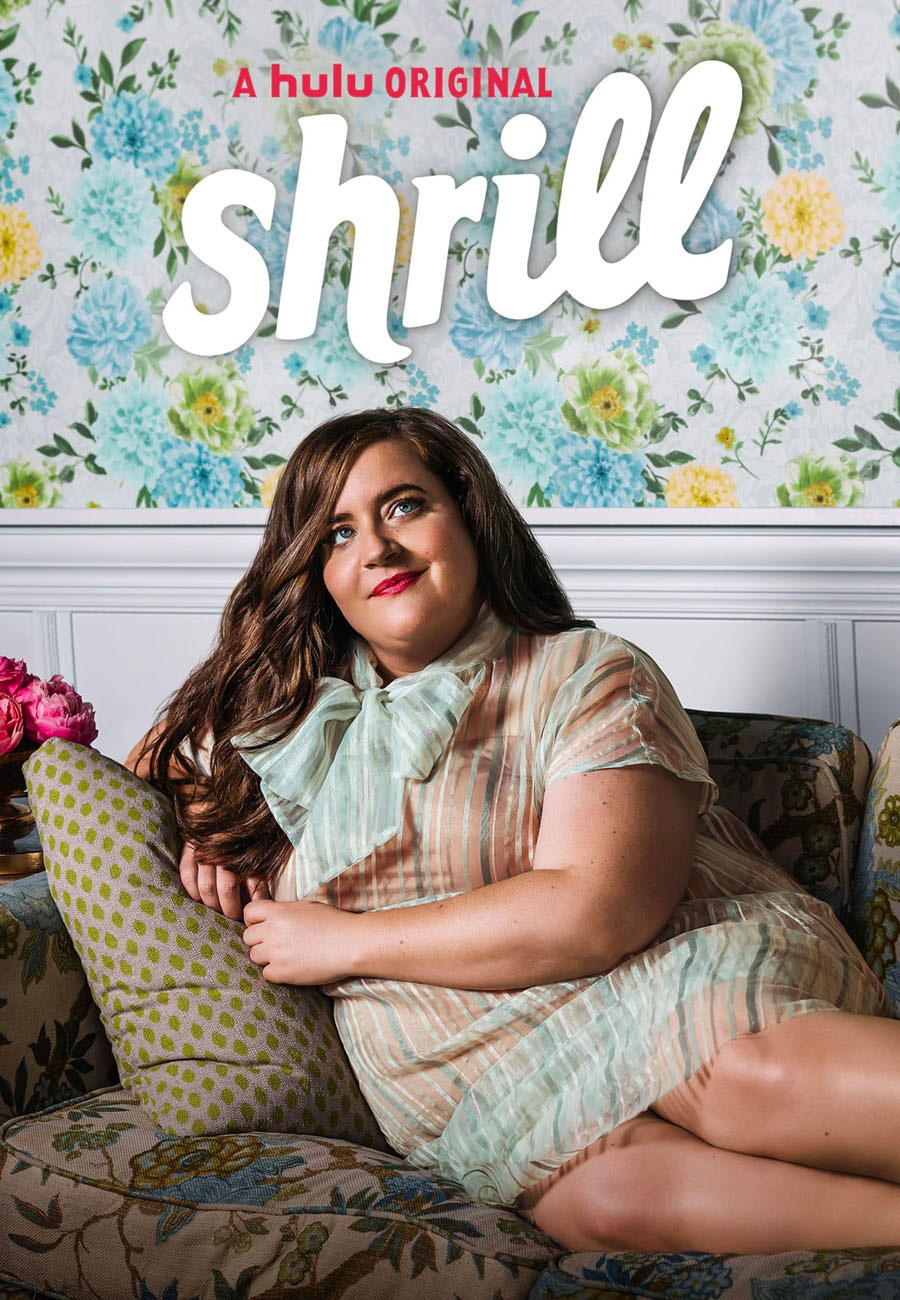 The first season of Shrill (Hulu) made me feel seen in a way that I’m not used to. We don’t often see fat women who are happy in their bodies, or working to be happy in their bodies, because most media would have you believe that we’re miserably obsessing over calories and trying to lose weight. I found myself rooting for Annie (Aidy Bryant) as she began to unlearn the societal prejudices regarding her weight and recognized how that has impacted how she lives in her own body.

In one episode, Annie attends a pool party of nothing but gorgeous, big girls lounging around in cute swimwear. I nearly cried during this scene because we’re never shown in the media as being happy, sexy, unashamed, fully-realized human beings; we’re always sidekicks or comic relief, but we’re never the romantic lead or a serious leading lady. It was breathtaking to see this magical space where fat women could just exist. It never occurred to me that there might be a place where me and my fatness could be completely at ease, and in that moment I longed for a magical space of my own. I realized while watching the episode that it was the first time in all of my years on this planet that I had ever seen so many plus-sized women with self-confidence in one place.

I don’t think I fully understood how much the lack of differently-shaped bodies in the media I consume had made me feel all but invisible until that moment. I think the reason I can relate to Annie’s journey is because I’ve been told since I was a kid that being fat is a bad thing that makes me less deserving.

It has taken me an incredibly long time to make peace with the fact that I’m fat. After years of internalizing society’s beauty standards, rude comments from family members who found it endearing to call a child “fat ass,” and feeling invisible around friends who talk about fatness like it’s the worst thing that can happen to a person without acknowledging my fatness in the same room, I am now at a place where I can understand that I am not the problem. It was hard not to feel connected to Annie as I watched her also process all of the crap that she’s been fed her whole life and decide to change the narrative. Because of my own journey to accepting my body, I relate to Shrill a lot more than I could’ve ever imagined. I was eager to see what season two would bring to the table—and I was not disappointed.

Season two opens with Annie learning how to navigate the world with newfound self-esteem. This leads to a lot less time being spent talking about her weight and a lot more time spent with her setting new boundaries and learning what she deserves—regardless of what society has led her to believe. I found this refreshing, as the television landscape is filled with women obsessing about their weight and how much they eat. I don’t live every day that way, and it’s great to see Annie is also more than a dress size too. This felt realistic because usually random people seem more preoccupied with our fatness than we are, because we’re busy juggling actual problems life throws at us.

This also shifted Annie’s dynamics in most of her relationships, because she was armed with the knowledge that she deserves respect, love, and that she’s more than a number on the scale. In an early episode of this season, Annie strolls into her internet troll’s office to interrupt a meeting so that she can ask him what he gets out of being so horrible to her online. It comes out that the reason he’s been body-shaming her online all of this time is that he simply wanted to feel as if he had power over someone. This realization hits home for me, because fat-shaming is one of the first tools in the toxic male tool-kit. It always seems to come out of nowhere, and they act like it should be a devastating blow in a conversation that usually has nothing to do with weight.

I’ve personally been called a “fat bitch” for not responding to a DM, saying no thank you to an unwanted DM, having a different opinion on Doctor Who, and even just using #feminism. Because society looks down on fat people and assumes all women are seeking the approval of the male gaze, these insults are imagined to be the worst thing you can say to a woman; however, the truth of the matter is fat doesn’t equal failure, and when you realize that there’s a lot less sting when the word “fat” is hurled at you from a frustrated troll.

The truth of the matter is fat doesn’t equal failure, and when you realize that there’s a lot less sting when the word ‘fat’ is hurled at you from a frustrated troll.

While I’ve become pretty numb to this over time, I remember a time before I was actually fat, but was still being told I was fat (because being a size 13 is reason enough to tell a teen that she’s obese in the Midwest). I remember being aggressively hit on during the MySpace era, and if I declined, then the conversation would immediately turn to how I’m “a fat ugly bitch.” Annie standing up to her troll and then paying him a more productive (although less gratifying) visit allowed me to vicariously get a sense of closure that most of us never experience in real life.

In the real world, I block the trolls to stop them from this form of sexist cyberbullying, but sometimes I want so badly to meet them in-person. To show up in their mother’s basement and straight up ask them, “What do you get out of harassing women online? Why don’t you understand that we also don’t find you attractive? Can we figure out where society failed you so that you can do better?” I want to see how they react when they’re forced to remember there is a human on the other side of their toxic online meltdowns and see if that changes the way they go about making their point.

Another moment where Annie refuses to engage in the harmful narrative that fat equals shame is in the episode “Freak,” where her parents Vera and Bill (Julia Sweeney and Daniel Stern) meet her man-child boyfriend Ryan (Luka Jones) for dinner. Because of Annie and Vera’s history, every time Vera mentions food, it comes across as a weighted comment. Vera tries to deny the table bread, proclaims the food portions are huge, and even joked that she should zip it before Annie writes about her again. Annie finally gets fed up after Vera complains that the “desserts are too rich” and explains that she shouldn’t have any because she’s “just been so bad with all the pasta and the bread.” Annie replies with “How have you been bad? It’s food,” before going on to explain that people should be allowed to do whatever they want. The conversation devolves, but Annie did something that I often dream of doing.

I often want to remind my acquaintances who “have cheat days,” or whine about having a “fat day” that I’m in the room and their relationship with food is much different than mine. I’m also forever holding in the urge to scream that being fat is not the end of the world as they talk about food as if it’s sinful—and then discuss how much exercise it would take to burn it off the cupcake they’re debating whether or not they should order. Being fat is a never-ending dance as you maneuver around fat jokes and fatphobia to just live.

I’m also forever holding in the urge to scream that being fat is not the end of the world as they talk about food as if it’s sinful—and then discuss how much exercise it would take to burn it off the cupcake they’re debating whether or not they should order.

At a conference, Annie meets with the keynote speaker who is taken aback by Annie’s use of the word “fat” while discussing the struggle to find cool clothes for fat women. Annie demonstrating ownership of the word and explaining “I’m not afraid of it, it’s just a descriptor,” is one of the most badass moments of the season. It reminded me of every time I talk about my own fatness in public in a serious manner and how uncomfortable people get.

I learned pretty early in life that if I’m not inviting people to laugh at weight, then my talking about it only makes them uncomfortable. In their minds, being fat is this awful and unspeakable thing, but in my reality, being fat is just my truth. It’s no different than eye color or height for me; it is just another thing that makes me unique, and at this point in my life, I’m over people assuming that I want to change it.

I learned pretty early in life that if I’m not inviting people to laugh at weight, then my talking about it only makes them uncomfortable. In their minds, being fat is this awful and unspeakable thing, but in my reality, being fat is just my truth.

How often have I made a joke or an observation about something I’m putting in my mouth to have someone in a serious tone give me some unsolicited advice? I find this especially frustrating because it reduces me to something they think needs to be altered instead of enjoying me for who I am.

Season two moves Annie so far along her path to being a more confident person that it almost hurts to see her still wasting her time with her awful boyfriend, Ryan. I spent most of the season wondering when she would realize that he’s a symptom of season one’s Annie, who lacked self-esteem and didn’t understand she deserves better.

Like a lot of us, she needs to admit to herself that she’s in this relationship because it’s easy and society has wired her to settle for less. As someone who tried a few dating apps before going back to my original plan to die alone, I can’t even begin to tell you how hard it is to get men you’re attracted to to see you as an actual person. I also can’t tell you how awful it is to feel trapped in something that’s not working, but society (including people who supposedly care about me) tells me that I need to settle.

Being fat is a never-ending dance as you maneuver around fat jokes and fatphobia to just live.

Part of the reason I stopped talking to people about dating is because it hurt to hear so many people tell me to get over my valid concerns and serious worries to make it work with guys that I did not want to spend any more time with. It especially hurt because it revealed how little these people I love think of me if they want me to settle for whatever random guy does the bare minimum. This is how I know what some people think of my fatness without them ever saying anything about it.

At the end of the episode, literal fireworks go off behind Annie to illuminate this moment, as she signals to Ryan, us, and herself that she deserves better starting now. More importantly, we all deserve better than what we’ve told ourselves to settle for just because some people can’t wrap their heads around the idea that fat people can have confidence.