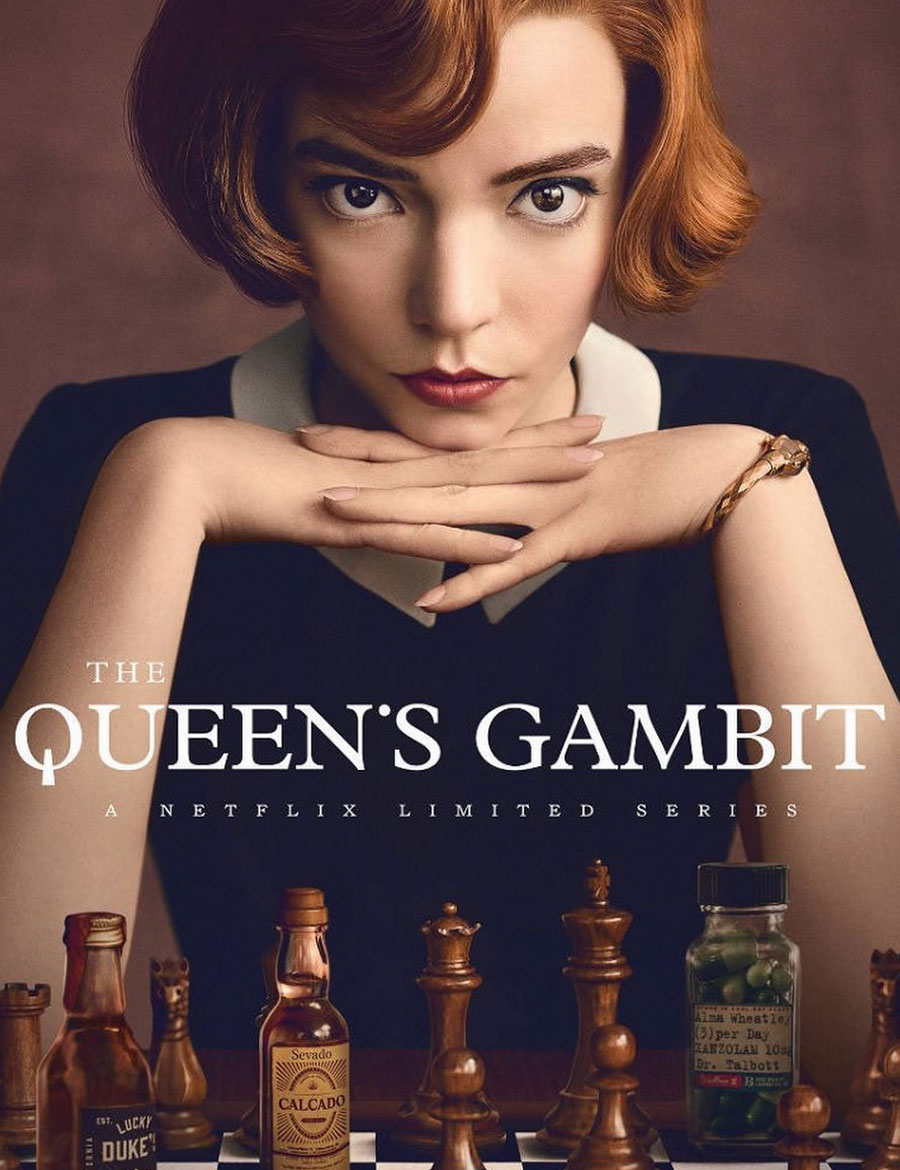 My limited knowledge of chess and even more limited desire to venture out of my Netflix comfort zone meant that I spent almost a month after The Queen’s Gambit release in October largely ignoring it, instead opting to scroll past its steady spot in the ‘Top 10 in the U.S. Today’ section on my way to queue up The Office reruns for the thousandth time. So when I finally started the series, I was both surprised and thoroughly embarrassed I hadn’t started watching sooner. Yes, The Queen’s Gambit is about chess—the series follows Elizabeth “Beth” Harmon from her days learning chess from a janitor in the basement of Methuen Home orphanage all the way through her meteoric rise to the top of the male-dominated chess scene of the 1960s—but it’s not just about chess.

The Queen’s Gambit depicts a young woman growing up, chasing down big dreams, and overcoming obstacles—and you don’t need to be a grandmaster to appreciate any of those things! Here are just a few of the applicable reminders and life lessons this series crams into seven episodes.

Warning: spoilers for The Queen’s Gambit ahead.

1. Do not write someone—or something—off too early

Beth’s chess career seems stacked against her from the beginning because of her gender. The first time she watches chess at the orphanage, she is told that girls don’t play. Later, after she is adopted, her mother tries to deter her from the game suggesting dance class or girl’s club instead. At her first chess tournament, she is told there isn’t a dedicated women’s section and to play as a beginner. Even at the height of her career, she is striking down accusations that she is “too glamorous to be a serious chess player.”

As a viewer, it’s frustrating and exhausting to watch Beth have to prove herself again and again. The frustration only grows when you consider that—despite the show being based on a fictional book and set 60 years ago—similar scenes still play out on a very real scale all the time.

Take it from the girl who admitted to stereotyping this very show just paragraphs ago: It’s easy to make snap judgements and stereotypes. What’s hard is taking the time and energy to challenge your own views and keep an open mind. But hey! If it leads to finding your next Netflix binge, I’d say it’s pretty worthwhile.

2. Don’t worry about fitting into a mold

From her stern poker face all the way to her brown shoes with brown laces, Beth’s character isn’t the typical female heroine. While her high school classmates are hiding between library shelves kissing boys, Beth is scouring the same shelves for chess books. While the girls at social club sing along to every word of the song on TV, Beth doesn’t know it well enough to join in.

Despite the many ways she might be described—orphan, prodigy, chess player, ‘60s teen—Beth doesn’t really fit the image you might have in your head for any of them perfectly. The Queen’s Gambit shatters tired cliches and gender stereotypes in favor of a complex and untraditional lead, but that’s exactly what makes it so memorable. By fighting the urge to fit a certain label, you can give yourself the same chance.

3. Start before you are ready

Beth is a real life example of learning on the job, even showing up to her first tournament before she knows how it is structured or how to use a chess clock. While research and preparation are important, there is definitely something to be said about the power of taking action even when you feel unprepared.

Next time you are waiting for the “perfect” moment to do something you’ve always wanted to do, pull a Beth and start before you are 100 percent ready. You might just surprise yourself.

4. Have confidence in yourself—even when others don’t

Ever heard the phrase ‘If your dreams don’t scare you they’re not big enough?’ Enter Beth telling the incredulous workers at her first tournament that she wants to play the best player there. But despite any ridicule, Beth let her game speak for itself. She was the literal representation of being so good it was impossible to ignore her.

Beth’s relentless quest for improvement is depicted in every episode. She visualizes matches while falling asleep at the orphanage, reads chess books in her free time, and sets up a mini chess board on an airplane tray table to practice on the way to a tournament. As her career progresses, Beth even takes a Russian course to prepare her for the prestigious overseas tournaments she’s intent on competing in. Talk about confidence!

Beth’s earliest friend from the orphanage, Jolene, has the same drive. Despite the fact that she had an unconventional childhood, she (spoiler alert!) grows up to work as a paralegal. And while she tells Beth her company only wanted to hire a Black female paralegal to “keep up with the times,” she remained undeterred in the pursuit of her goal to attend law school, be a “radical,” and change the world.

Both Beth and Jolene show just how far confidence in yourself and your abilities can take you. Next time you want to count yourself out early, stay your course, treat yourself with kindness, and take that next step forward.

Beth struggles with addiction throughout the series, first becoming hooked on the tranquilizer pills given to her in the orphanage and later becoming reliant on alcohol and medication to get in the right mindset to compete. Even with chess, Beth’s intensity blurs the line between mastery and obsession, telling one reporter that chess is “an entire world of just 64 squares. I feel safe in it. I can control it, I can dominate it. And it’s predictable.”

While having purpose and passion adds so much value to life, your physical and mental health shouldn’t suffer as a result. Look after yourself to avoid burnout, give yourself grace, and know how to ask for help when you need it.

6. Be open to constructive criticism

From allowing herself to be tutored by her male peers to taking a call to discuss strategy during the adjournment of one of the biggest matches of her career, Beth is receptive to feedback and coaching. Her game improves as a result.

It can be really hard not to take feedback personally, but when someone you trust offers you tips for improvement, be open to the advice and see how implementing it might positively impact you.

One of the most poignant moments of the series comes in the final episode when Jolene reunites with Beth. Beth is in a dark place, using pills, drinking heavily, and neglecting her usual diligence with chess practice. The women have a heart-to-heart with Jolene telling Beth it looks like she’s at the bottom of a hole that she dug herself. “My advice?” Jolene says, “Stop digging.”

We really can be our own worst enemy. When we are undermining our own success, neglecting our health, and giving up on what matters to us, sometimes the best remedy really is to stop digging.

8. You don’t need to understand something to enjoy it

It seems like it’s only right to end this piece by saying that The Queen’s Gambit really opened my eyes to the fact that understanding something and appreciating it aren’t mutually exclusive. So even though I will probably never be able to set up a chess board without Googling it, I truly enjoyed immersing myself in a new subject and adding a few new chess terms to my lexicon. As it turns out, maybe the ASMR of chessmen hitting a board to the steady tick-tick-tick of a chess clock was exactly the soothing divergence 2020 called for. Who would’ve thought?