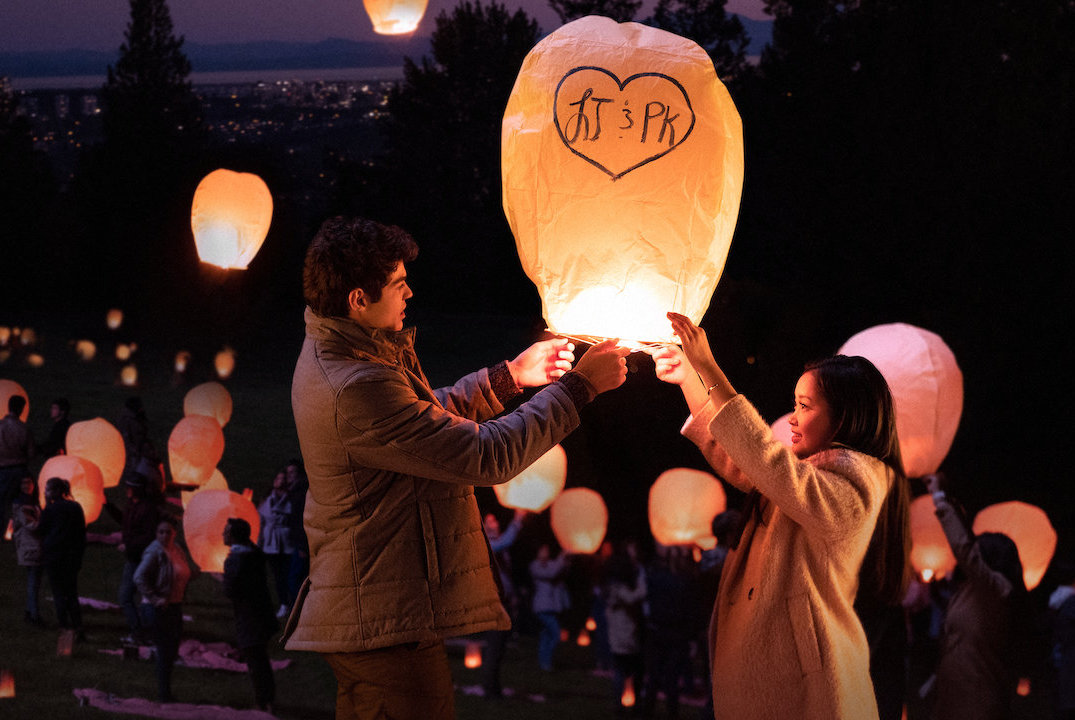 When To All the Boys I Loved Before came out, The Everygirl office erupted in emotions I’m not even sure I could even explain in words. “Obsessed” would be a drastic understatement. It gave us those cringey awkward high school moments we all low-key miss, while also reminding us just how underrated a classic makeout really is. Peter K became our ultimate dream guy—watching him spin Lara Jean in the cafeteria definitely made us gasp and text our partners to come over right away.

To All the Boys 2: P.S. I Still Love You is the second coming of Peter and Lara Jean’s relationship. They already did the whole faking-a-relationship situation, and they’ve officially decided to begin a real relationship. But remember the five letters LJ’s sister sent to her former crushes? There was one she never heard back from: John Ambrose McClaren. He responds to her letter, and as expected, a bit of a love triangle begins to form. Sounds like everything you could ever want, right?

Because we were all deeply engrossed in the LJ/PK love story from the original film, we had to see the second installment as soon as humanly possible—and it had to be together (you know, for the full effect). We caught an early screening of the film and just had to share our thoughts. The movie doesn’t come out officially until Feb. 12, but we wanted to give you all the deets ASAP. After walking away for approximately 12 hours, here is everything our team had to say without spoiling the film. Consider this your insider look into our Slack channel, aptly named: #teampeterk.

Before we begin, we should address a few things:

No stress if you haven’t seen the movie yet—no spoilers ahead!

Here were our unfiltered thoughts:

Is the guy at the end of the first movie not John Ambrose McClaren?

If you recall at the end of the first movie, John Ambrose comes to the door … but he looks nothing like the John Ambrose we know (played by Jordan Fisher). 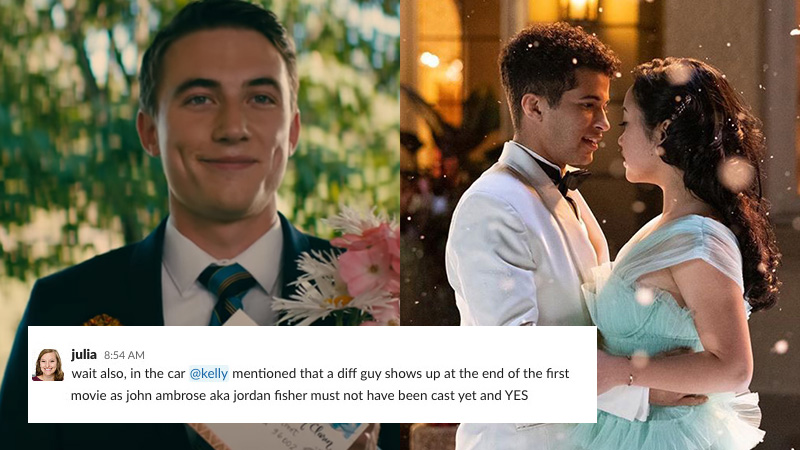 So if you were expecting a love square this movie, no stress—only two guys are after Lara Jean’s heart for right now.

Peter Kavinsky is everything, anything, all the things. 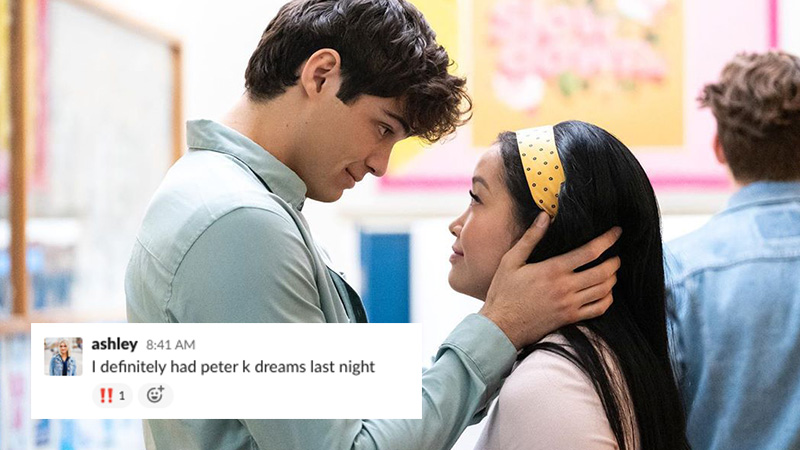 Without any spoilers, all we can say is “do whatever you want” might be our love-life motto from now on. Kelly, Senior Graphic Designer and Online Course Director, had a lot of thoughts on this scene that just couldn’t make it into this review (you know, no spoilers and all). We can’t wait for you all to see it. 😍 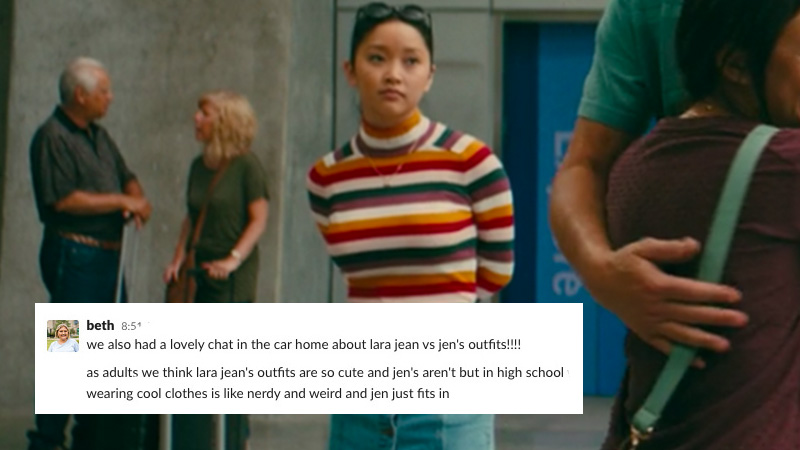 Lara Jean’s outfits were absolutely on point. Filled with heeled loafers, polka-dot heart dresses, platform white sneakers—Lara Jean’s style will be a mood all spring 2020 for sure.

The movie is actually diverse. 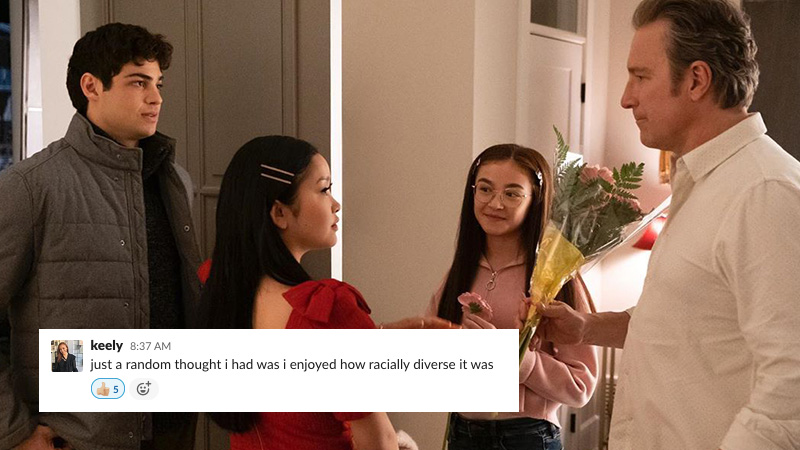 We all couldn’t agree more. The film made a conscious effort to include different races and cultures—in the casting, but also in the dialogue, the costume design, and more. Just like the first movie, it really did feel like a glimpse into what kids actually go through in high school, which speaking of …

A few scenes SHOOK us to our core.

In an effort to keep everything as under-wraps as possible, we don’t want to get too much into the plot here. But there was one thing we wanted to say for all of those who see the movie:

We also discussed a lot about what happens between Peter and Lara Jean and their maturity/lack-thereof. We were all in agreeance that they really resemble this typical high school relationship of learning and trying to figure their feelings out.

Physical boundaries also come up in the film, as they do in a typical high school setting. They handled these scenes perfectly in our opinion, being both awkward to watch but also setting an amazing example for young people on how to address a physical relationship (which is honestly relevant for all ages!). Abigail used the word “refreshing” to describe how she felt watching these scenes unfold—and we all agreed with that assessment.

Lara Jean begins volunteering at a nursing home for school, and she meets a new friend there named Stormy—and we are obsessed. Also, LJ and PK aren’t the only love stories you’re about to fall in love with …

More Dr. Covey is exactly what we ordered for TALB2.

Fakesgiving is officially an Everygirl-observed holiday.

We can’t say much here without giving anything away, but this was probably our favorite part of the whole film. The Everygirl Media Group Fakesgiving will commence in March 2020 … except without that one signature Covey dish. 🤢