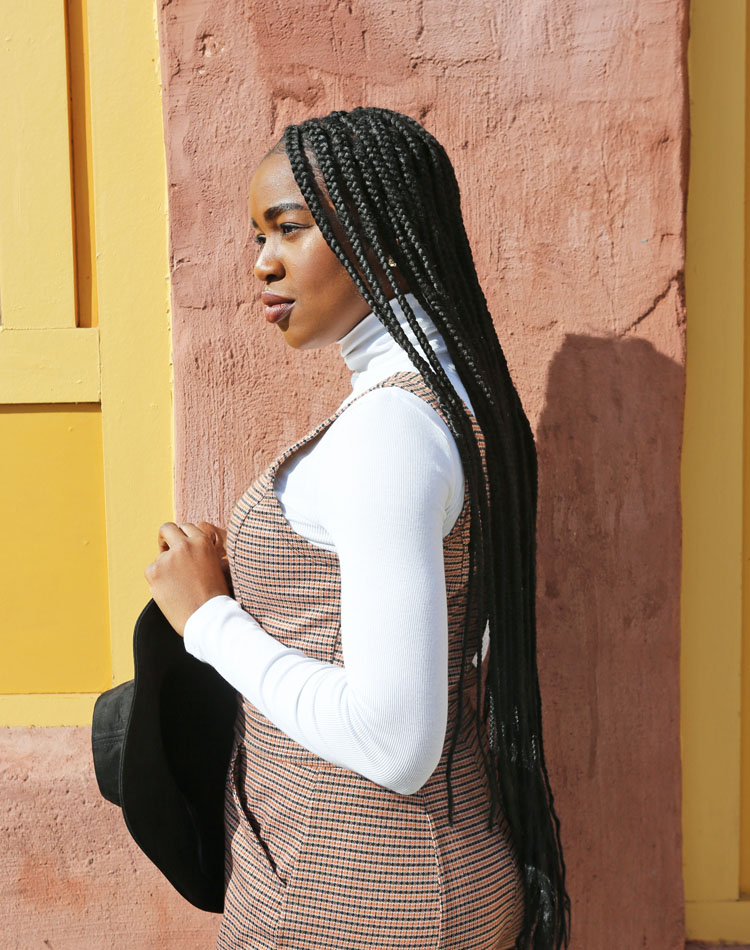 What do you think of when you think of Canada? Chances are, you’re thinking about maple syrup or moose, but it’s likely that you’re also thinking of that super-friendly stereotype too. That stereotype seems to give a lot of people—Canadians included—this idea that anti-Black racism isn’t really prevalent here. With the social unrest currently happening in the United States, I’ve seen a lot of fellow Canadians on my social media lamenting about how glad they are that we’re “not like that” here. A particularly popular post I’ve seen being shared reads, “Canada must feel like the apartment above a meth lab!”

Sorry, but in terms of racism, that is incorrect.

Every single BIPOC that I have ever known in Canada has dealt with pervasive racism throughout their lives, but I can only speak from my own experience as a biracial Black woman growing up in rural Ontario.

Here’s a collection of racially-charged things I’ve experienced throughout my life, in no particular order:

1. My 10th-grade math teacher comparing me to a dirty white T-shirt in front of the entire class.

3. My best friend (who happens to be gay) and I were barred from running for student council co-presidents together in 12th grade because of “lack of experience.” I had been on student council since ninth grade, and him since 10th.

4. Being asked questions like “What are you?” “Where are you from?” “No, where are you really from?” “OK, where are your parents from then?” Jeez man, would you like a family tree to satisfy your need for an explanation of my skin tone? Those questions were in consecutive order from one customer while I was trying to do my job, by the way.

5. Having the police show up at our home randomly when I was a child because people would call them hoping to catch my father doing something wrong, which they of course never did, because he wasn’t. The police would often end up apologizing for the trouble because they knew what was happening.

6. Men who are only interested in me because they want to be able to say they’ve “been with a Black girl.”

7. Being expected to have certain skills based on my skin tone and to perform them—i.e. being told to compete in rap battles, “talk Jamaican” (despite having the exact same accent as they do), twerk, “talk ghetto” (again, I’m from rural Ontario).

8. Watched my classmates drive other Black students out of our elementary school in a matter of months with their harassment.

9. When I am with my mother who is white, being asked if I am adopted, and people not believing that I am her biological child.

10. Being singled out and treated differently by some teachers since kindergarten (for the most part, I was the only Black student).

11. Called an Oreo (Black on the outside, white on the inside).

14. Witnessed my father being harassed for attempting to greet the neighbors and riding his bike around the neighborhood. They accused him of something awful that was not true, entirely baseless, and I honestly don’t feel comfortable sharing.

15. Had past boyfriends’ parents say things like, “It’s totally OK that you’re Black! We don’t mind at all!”

17. Makeup artists who didn’t stock their kits with foundation and concealers that match my skin tone and told me to provide my own.

18. People casually using racial slurs and making racist jokes in my presence, and then turning on me if I show displeasure.

19. I had a classmate constantly harass me in 12th grade to let him “help” me because he wanted “to get a scholarship for helping the Black community.” This “joke” went on for ages as this person thought it was just hilarious! Comedic genius, I tell you.

20. A slew of Black jokes throughout my life, I can’t remember them all and I don’t care to try. There are way too many for me to waste the mental space or energy.

21. Asked to translate for my father despite the fact that he speaks excellent standard English.

*Editors’ Note: We have altered the word with the writer’s permission.

There are many more things that I could talk about, but the truth is that it takes effort for me to remember these things, because I sadly just became used to them as I grew up.

I don’t want to spend any more time or effort trying to remember them for my own sake, but this last one that I’ll share is one I’ll never forget. I debated with myself about sharing this 22nd example quite a bit, but it has been on my mind a lot lately with the atrocious act committed against George Floyd.

When I was a child, a group of men came to our home with their Rottweiler and physically and verbally attacked my dad, with the goal of making him physically defend himself so they could call the police on him. I remember them yelling and pushing him. I remember watching one of them grab my dad by his throat. He couldn’t do anything, because any mark left on these men would be used as evidence against him. It would be their word against his, after all. It was terrifying, and although I was a child, I understood what was going on. All I can remember doing is screaming.

You’d think (or hope) that this was an isolated incident, but it wasn’t—it’s just the only one I can remember clearly. To this day I still feel a sense of terror and suspicion whenever someone slows down in front of my house, that is complete with a physical response; my heart is both in my throat while it simultaneously hammers in my chest, and my stomach feels like a wrestling match between knots and butterflies. It happened so long ago and the feeling is still so strong, I don’t think it will ever go away.

From what I’ve seen around the internet, there are some people out there that think “they” or  “the media” are creating the racial divide and blowing things out of proportion, but that’s not true. It’s been bad, and it’s been staying bad.

Pictured below is an article with a photo of my father and I that was written when my family was new in town, published in 1997. The first line says, “All Lincoln Hodges wants is for the people of Orillia to get people to know him. Nothing more, nothing less.” Can you imagine being treated so poorly based on your appearance that an article was published in your local newspaper asking people to just try getting to know you first? In the interest of transparency, you should know that people did reach out with letters and calls of support following the release of this article, but it had to be written in the first place, and everything I mentioned above occurred long after 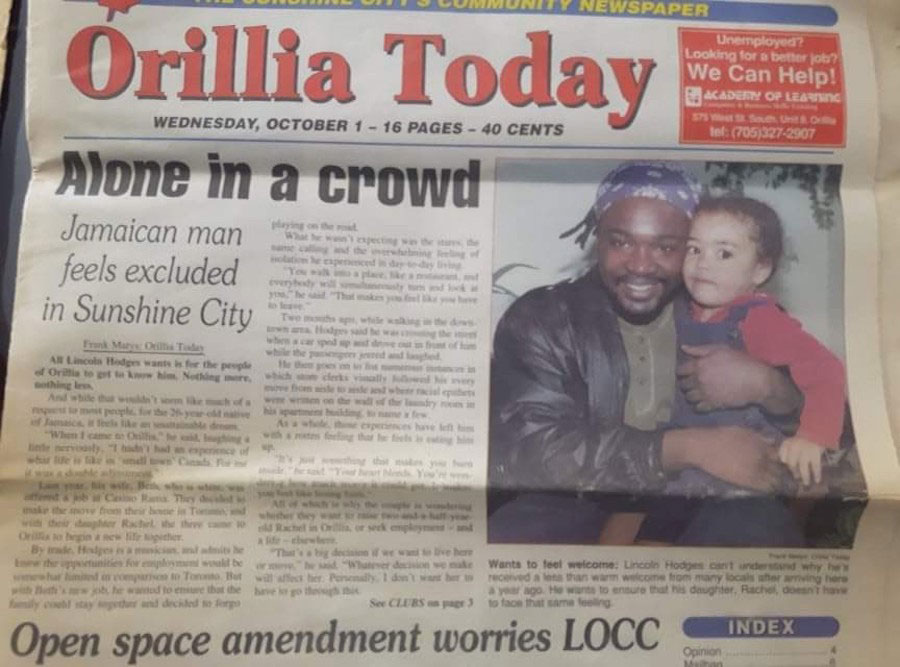 While many of the examples listed above were malicious, there are also many that simply came from a place of ignorance. You don’t need to be a self-proclaimed racist in order to do or say things that are racist without realizing it.

I think that’s a big source of conflict—when we say, “Hey, that was racist,” I think people often take that as an attack on their character, when that isn’t necessarily the case. The amount of times perfectly lovely people—my own loved ones, even—have unwittingly said or done something racist towards me honestly feels infinite, but I don’t hold it against them because they were unaware. That’s the thing about intent vs. impact though; even though they were unaware and I knew that, it didn’t make it hurt any less. From the outside looking in, some of these things may appear small or inconsequential, as if they should be easy to brush off. After a lifetime of it though, I just can’t, and I shouldn’t have to in the first place. It hurts deeply. It’s an emotional death by a thousand cuts.

I’ve seen a lot of posts on social media lately attempting to highlight this facet of the larger problem. If any of these posts going around have made you feel attacked, I encourage you to take some time to sit back and think about the root of why that is.

I absolutely love Canada and am very proud and thankful to be Canadian, but let’s not pretend our country is perfect. The things I mentioned are only a small collection of the things I’ve experienced as a Black woman in Canada, and they’re still happening. All. The. Time. I think the saddest part for me personally is knowing that as a light-skinned Black woman, my experiences are only a fraction of what my darker brothers and sisters face, because colorism is a problem here too. That high horse we’re sitting on are nothing more than wishful thinking, so let’s not let George Floyd and countless other Black men and women die in complete vain. Let’s take this time to look at our own country and figure out how we can be better, because it’s not all sunshine and roses here either.