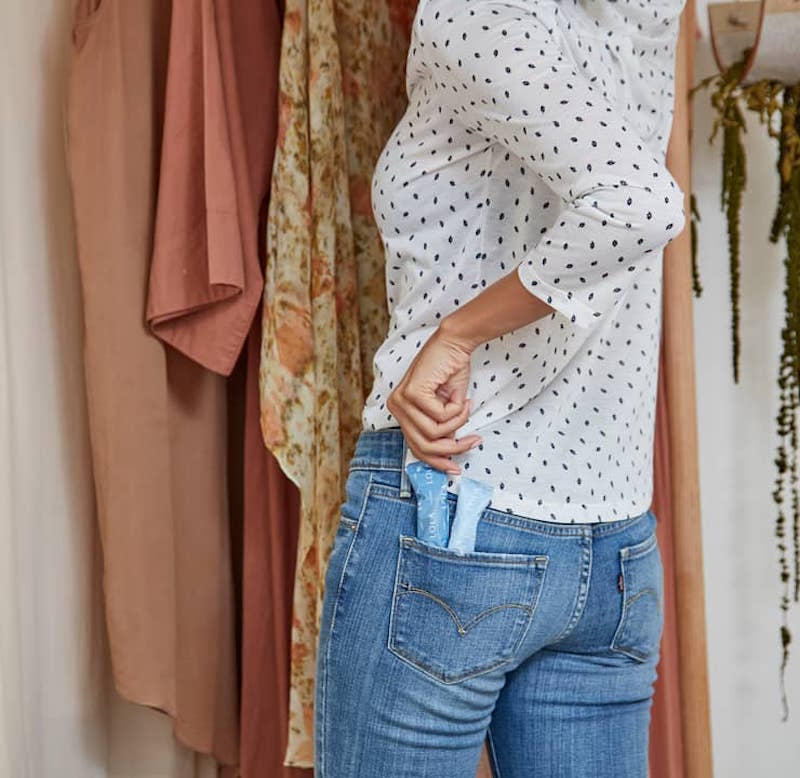 I’ll never forget the day I got my first period. I’ve been known to be a touch ~dramatic~, so my first ride into Menstruation Station was, of course, no different. The cramps were unlike any other stomach pain I’ve ever felt before — so naturally, I spent the entirety of my school day prancing around, telling anyone who would listen that I needed to have my appendix taken out, and to not worry if I didn’t show up at school the next day. I told my mom first thing after school that I thought I needed to go to the emergency room (secretly relishing the attention I thought was to come) — and she knowingly rolled her eyes. Once I finally went to the bathroom after school, I was like, “Oh.”

Since that fateful first day, I’ve felt the sting (and burn, and ache, and pain, and swell, and overall misery) of my period. Once a month every month for the last 10 years (aw, happy anniversary, uterus!), I’ve become a slave to my body — grateful for the beauty of womanhood and all that jazz, but mostly just annoyed.

And I’m not alone! Pretty much every woman alive between the ages of puberty and menopause feels my pain. Upon the realization that this was a ~journey~ I’d be on every month for most of the rest of my life, I decided to take matters into my own hands and better get to know my body.

ALL THAT BEING SAID — knowledge is power, people! Once you know how your cycle affects you, your body, and your emotions, you can take the control back. You won’t necessarily stop feeling the effects — but you can stop letting them take you over. Here, let’s do a day-by-day breakdown of what happens to you during each stage of your cycle (trust me, I’m a doctor — of love and peace and period joy).*

*Note: I am NOT actually a doctor — of anything. A “normal” cycle can last anywhere from about 21-36 days, so this is not an exact science. Rather, it’s a guide to be used to measure against your own body’s norms and tendencies. Think of me as your trusty Period Fairy Godmother!! (Look, mom, I made it!!) For any and all questions you still have (and you will), please please consult your doctor or another medical professional.

First of all, what an incredibly weird word. Follicular, follicular, follicular. (No, I am not drinking while writing this, why do you ask?) The follicular phase starts on the first day of your period (Some doctors/normal people would say that menstruation isn’t counted in the follicular phase, but some say it’s all together. Tomato, potato, period, shmeriod, amiright?). Since you’re losing blood (obviously), your body is losing iron — so you might feel dizzy, nauseous, and even a little extra nervous. Also, since you’re not pregnant, your estrogen levels decrease. As you probably well know, period symptoms include cramps, bloating, tender breasts, mood swings, headaches, and lower back pain. I also get really sore quads — is that normal?? Stay tuned. (P.S. If you, like many others, experience rough menstrual migraines, it’s probably due to those depleted iron levels — load up on red meat, leafy greens, and nuts.)

Day 2 is likely the heaviest day of your period — aka it’s a tiny slice of hell and you deserve to be treated like the MFing queen you are. Pour an extra glass of red (or don’t — as alcohol has been known to worsen those crappy period symptoms like bloat and cramps).

Around Day 3, the worst part is almost over. Your vaginal pH is most likely changing rapidly, which can lead to a yeast infection. Nothing crazy — just nice to keep in mind. If, at any point in the last three days, you’ve seen blood clumps the size of a plum or larger, it’s a good (actually, GREAT) idea to schedule some face time with your gyno.

The average period lasts between 3-5 days, but can often last up to seven. Once the bleeding stops, you enter the second part of the follicular phase.

Like I said, some people would say that the “follicular phase” doesn’t technically start until your period is over — which is technically more on-the-nose, as this is the time when the follicles on your ovaries mature and prepare to release eggs (good job, little follicles!!). This is when the fun stuff happens — your estrogen levels go wayyyy up (cue images of John Tucker on the basketball court). When your estrogen levels are high (they’re usually highest around day 10 of your cycle), you’re likely to experience at least a few of the following delightful symptoms: sore breasts, increased irritability, a lower sex drive, mood swings, bloating, and headaches. YAY!

So while your body’s basically all over the place externally, what’s happening INTERNALLY is actually super interesting. At its most basic level, what’s happening is that your uterine lining is thickening — it’s basically just preparing for the possibility of housing a fetus. There’s a careful balance of hormones that allows the body to limit the number of follicles that will prepare eggs to be released (most times, and for most women, only one egg will be make it this far each month). I’m not super sure what that means, but MyClevelandClinic.org assures me it’s a good thing. At its most basic level, your uterus is just reorganizing itself to prepare for pregnancy — which is SO cool!

If you’re looking to get pregnant, day 11ish is the time to get started!! Since ovulation isn’t a black-and-white exact science, your fertility levels are already increasing due to your high estrogen levels. A period tracking app (like Clue or Eve — I track mine on my Fitbit app!) can help you best track how fertile you are at any given point during your cycle — something that’s good to take note of, whether you’re trying to get pregnant or not.

Ovulation is truly one of the most fascinating things in the world to me. I first learned about the intricacies of ovulation just a few months ago — allow me to tell you a story.

I was watching The Bachelorette, and I was MIND-BLOWINGLY attracted to Becca’s contestant Leo (Yes, I now realize he is not a good person. But this was before I learned all that.). Leo is a professional stuntman with a rock-hard body and flowing Tarzan-like locks. I came into work the next day, and I was like, “I’m not normally attracted to guys like Leo, but last night he was REALLY doing it for me.” The always-wise Rachel, managing editor of The Everymom, asked, “Oh, are you ovulating? That could be why.”

Basically, when you’re ovulating, your body wants to get you (Monica Gellar voice) gooood and pregnant. If you are a woman who is attracted to men, these few days may lead to you feeling particularly attracted to really quote-unquote MANLY men (I know it’s stereotypical — but it’s literal science.). Your hormones are trying to seek out ~fellow fertile people~, so you’re more likely to be attracted to typically masculine traits — deep voices, squared jawlines, and strong bodies. Of course, not everyone is attracted to men at all — so take this with a grain of salt.

Now that we’ve discussed that vital part of ovulation, let me break it down a little more.

What exactly is ovulation?

According to Healthline, “Ovulation is when your ovary releases a mature egg. The egg travels down the fallopian tube toward the uterus to be fertilized by sperm.” Technically, you’re only ovulating for about one single day, as the egg will die if left unfertilized. This is NOT to say that you can only get pregnant one day out of your cycle — sperm can live inside the body for longer than a day, and you’re technically fertile throughout the rest of your cycle (just less). I’m not here to tell you which kinds of birth control to use or not to use — but if you’re actively trying to prevent pregnancy, it’s best to have a chat with your doctor to discuss your ovulation schedule, your likelihood of pregnancy, and your birth control options.

One more ovulation symptom: Even without a period tracker, it’s easy to tell when you’re ovulating. During ovulation, you release an egg-white-ish discharge — according to AmericanPregnancy.org, “fertile-quality cervical mucus, also known as egg white cervical mucus (EWCM), is clear and stretchy, similar to the consistency of egg whites, and is the perfect protective medium for sperm in terms of texture and pH.” Deeeeelightful.

Feels like we’ve been through so much, but we’re really only halfway done — amazing! Actually though, the most exciting part of your cycle is now over. After ovulation is finished, the egg travels down the fallopian tube, and the follicle (that had housed the mature egg) turns into something called the corpus luteum. This corpus luteum releases progesterone and some estrogen, which are great if you ARE pregnant. If you’re not pregnant, the corpus luteum will die and become a tiny bit of scar tissue. Your progesterone levels will then go back down, you’ll shed your uterine lining (on day 1), and the whole cycle will start back over.

The luteal phase has two fairly distinct halves. During the first half, your progesterone levels are up (as produced by the corpus luteum) — progesterone is an anti-anxiety hormone, so this is a great time for nesting. I always find myself organizing shit, staying late at work, and obsessively cleaning my kitchen during this time.

The second half you know all too well. The second half of the luteal phase is when your body is either revving up to tell you that you’re pregnant or revving up to give you a period — and if you’re not, that means PMS. Premenstural syndrome is basically just a shitstorm — it’s your body’s way of telling you that menstruation is coming, and it usually brings with it a series of unfortunate symptoms. Cravings, cramps, bloating, and increased irritability are all super normal.

A dive into my own life:

I kid you not, my body’s PMS rhythm is like clockwork. About 10 days before my period, I break out along my chin (frickin’ classic PMS sign — hormonal acne is most commonly along the jaw). Five days later, I have what my family so affectionately calls “Abby’s Bitch Day” — I honest to goodness hate everyone and everything, and I listen to a lot of Quiet Riot and Aerosmith (it’s a great look for me). The next day, I cry at the drop of a hat. This time around, I saw A Star Is Born during my Cry Day — bad move, Batman. The next day is when I feel most ~sexually charged~ — Editorial Assistant Josie hates my Horny Day, because I always distract her during the workday by sending her pictures of John Mayer wearing glasses. I am not sorry. Finally, Abby’s PMS Journey ends with Sensitive Day, when I take everything incredibly personally. That one’s pretty self-explanatory, and I don’t want to dive into it because Sensitive Day happens to be today and I don’t want to tell you about it and then have you tell me I’m being too sensitive and then I’ll get oversensitive about the fact that you think I’m being oversensitive. Let’s just not go there, mkay?

Basically, you get the picture — PMS is when you feel most vulnerable most emotionally and physically, so give yourself a little grace and a lot of love.

When it comes to your body’s cycle, there’s a lot that you can’t control. Knowing your own body, however, is the best way to begin to gain control over the ways you ebb and flow emotionally, physically, sexually, and hormonally. Still confused? Call your doctor, call your mom, call your girlfriends — we’re all in this together, mama.