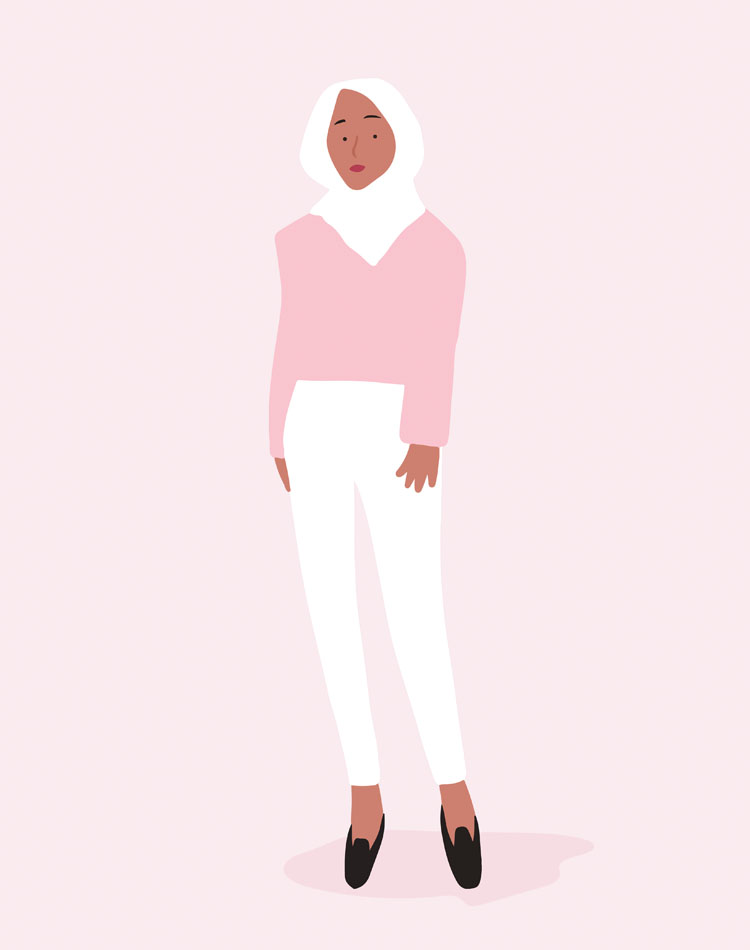 “Do you shower with that on?” was the first question I was asked about my headscarf on my first day of high school, which was also the first day I started to wear it. (It is a pretty common question, believe it or not.)

Although I grew up in Canada, I’ve traveled to my home country of Syria numerous times. Since I was a young child, I was always mesmerized by how the women in my family back home wore headscarves that were super colorful, paisley-patterned, or gold-embroidered. These scarves were not just beautiful; they symbolized the thousands of years of my culture and tradition. These headscarves are one type of the “hijab,” worn by Muslim women all around the world for religious reasons. But the hijab is more than just a pretty piece of cloth—it’s a loaded pretty piece of cloth.

Here’s a quick lesson on the “hijab.” The literal translation of “hijab” means “to cover.” It is usually referred to the physical headscarf, but it is so much more than that. Hijab is a way of life that is followed by Muslim women who choose to wear—or not wear—the headscarf. It represents a set of codes that we, Muslim women (and men), follow that regulate our day-to-day life. These codes are an embodiment of modesty and morality: it is a combination of how we represent ourselves, behave, speak, and treat others. Wearing the hijab is part religion and part culture, but can also be part political statement and part fashion. It is a personal choice made by Muslim women based on all four concepts. Wearing a headscarf is practiced by Christian, Jewish, and Muslim women (and more), but in today’s world, it is most commonly associated with Muslims. Overall, the concept of hijab is open to interpretation.

Because I cannot deny the fact that there are negative connotations of the hijab everywhere (even where people have the power to choose to wear it), my hijab serves as a constant motivator to try to break the associated stereotypes wherever I am, however I possibly can.

For me, wearing the hijab is something that is extremely personal, yet it is the most visible and the very first thing people see about me. Wearing the hijab simultaneously symbolizes my religion and my culture. It’s a reminder to myself that my hijab isn’t just what I’m wearing—it’s also what I do and what I say. It reminds me that every day, I am lucky enough to be living in a country that allows me the power to choose to wear something that outwardly represents my morality, modesty, and my pride in being a Muslim woman. For me, in no way whatsoever does my hijab restrict my goals in life—whether it is in school, my future career as a healthcare provider, or just my self-growth. My hijab actually does quite the opposite; it empowers me. It means that with my hijab, I ultimately have the power to choose how I show myself to the world, and what I want the world to see. Because I cannot deny the fact that there are negative connotations of the hijab everywhere (even where people have the power to choose to wear it), my hijab serves as a constant motivator to try to break the associated stereotypes wherever I am, however I possibly can.

My hijab forces the people I interact with every day to look past my appearance and see who I truly, and unapologetically, am. While I do take pride in my appearance, it is important to me that I am only judged by my personality and intellect. I remind myself of the fact that the hijab not only acts as a filter for people who will judge me because I am covered, but will also possibly serve as a conversation starter with a complete stranger. Although it is unfortunate when I find myself talking to someone who already has preconceived notions about what Islam is and believes that Muslim women are being oppressed by the hijab, it is in that exact moment that I am happy to serve as an ambassador of my faith and can show people that no, I am not like what you see in the media. I am actually someone that might share more in common with you than you might imagine; I am someone that loves to travel, is a self-proclaimed iced coffee addict, and will forever be upset by the fact that Grey’s Anatomy wrote out Alex of the show!

Despite the difficulties and the certain amount of discipline needed to wear it, my hijab is inseparable from me. It is entwined into my identity.

My relationship with my hijab is not perfect. Every day comes with a new set of challenges, and it can be really hard sometimes. There are times where I do not want to be associated with my religion because of the misrepresentation and demonization of it in the media. There are times when I want to be able to walk into a crowded restaurant and not be stared at by everyone. There are moments when I think it would be so much easier to dress if I did not wear the hijab. It’s so frustrating when someone expects me to be or think in a certain way because I choose to wear the hijab, and that sometimes, I find myself having to overcompensate or speak on behalf of everyone who shares my faith. But I know that I honestly cannot imagine my life without it. Despite the difficulties and the certain amount of discipline needed to wear it, my hijab is inseparable from me. It is entwined into my identity.

To me, the hijab means so much. It’s a physical reminder of the way I choose to represent myself, my strength, and most importantly, my way of showing devotion to my religion and God. It may sometimes create barriers in my life, but the strength the hijab provides me also allows me to overcome those barriers. Just like how people choose other things—a tattoo, a necklace, or a bracelet—as ways to remind them of something personal, I choose my hijab to do that. In my opinion, the physical aspect of my hijab should not be judged: it’s not about how I look, but only about how it makes me feel.