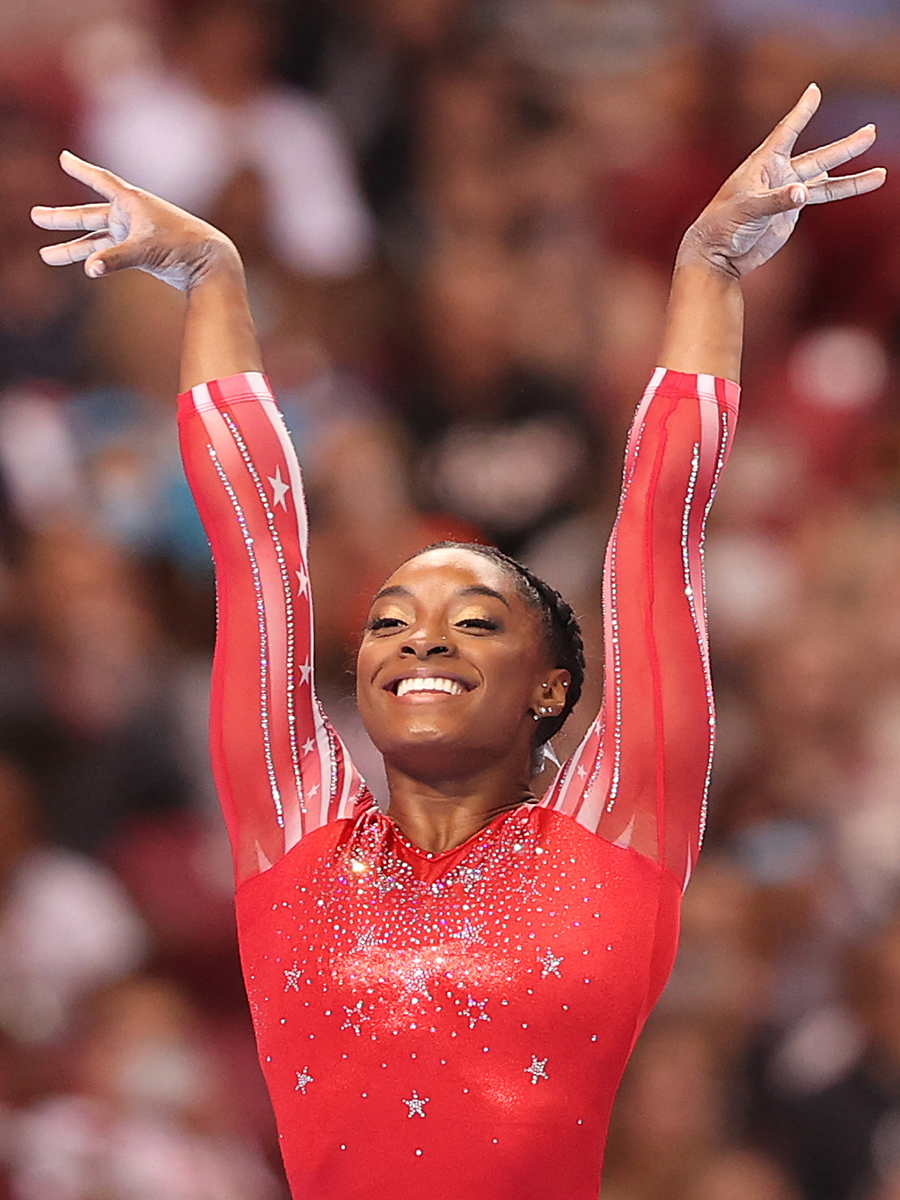 The Olympics are finally here! After a year-long delay, a second state of emergency declaration in Japan, and considerable controversy, the world’s greatest athletes have convened in Tokyo for the Games of XXXII Olympiad.

Of course, we’re #TeamUSA in all the sporting events, but we’re cheering extra hard for the incredible women who are competing in this year’s Games. Many of the women are moms or Olympic first-timers, and others have overcome barriers and injury to join the world’s largest display of athleticism.

Women began competing at the second modern Olympic Games that were held in 1900. 121 years and 30 Olympic Games later, women will make up nearly half of the competitors for the Summer 2021 Games. Here are some of the women we’ll definitely be watching:

The G.O.A.T. Period. If Simone Biles wins at least four medals at the Games this year, she will be the most decorated gymnast, male or female, of all time at global championships.  And that feat, though it sounds incredibly challenging, is totally possible for Biles. She is the first woman to win seven all-around gymnastics titles, she’s won 25 medals at world championships—19 of them gold—she won five medals (four gold, one bronze) at the 2016 Games in Rio, and she has four moves named after her. Did I mention that Simone Biles is the G.O.A.T.?

Four-time gold medalist Sue Bird is no stranger to the Olympics. Making her fifth Olympic appearance, Bird will represent Team USA Women’s Basketball. She plays for the WNBA’s Seattle Storm, and at 40 years old, she is the oldest player in the league. Even better, Bird has won four WNBA championships, she’s the most decorated International Basketball Federation (FIBA) World Cup athlete in history, and she’s a Guinness World Record holder for the most consecutive gold medals in a team Olympic event.

Skateboarding is one of the new sports added to this year’s Olympic Games (along with baseball, softball, karate, sports climbing, and surfing), and 24-year-old Mariah Duran is a street skater whose love for skating outweighed the “taboo” of competing in a seemingly male-dominated sport. Trained by her brothers, Duran got used to being the only girl at the skatepark. Her talent, fearlessness, and diligence paid off because she is the highest-ranked American woman in street skating according to World Skating rankings, a two-time Women’s Street X Games gold medalist, and now, a member of the inaugural USA Skateboarding Team.

University of Texas at Austin graduate Tara Davis is making her Olympic debut as a long jumper for the USA Women’s Track team. A recent graduate, Davis was a showstopper in college, earning NCAA championships in indoor and outdoor long jump as well as setting multiple collegiate long jump records. Her boyfriend, Hunter Woodhall, is a two-time medalist on the USA Paralympic Track and Field Team, which competes in Tokyo in August. Talk about a Power Couple.

This new mom and nine-time Olympic medalist (six golds!) is more than just one of the greatest track and field athletes ever—she is also an advocate for mothers’ equality. As a woman in sports, Felix was already familiar with the male-centered nature of the industry, but the inequality was even more glaring when she became pregnant. Nike cut Felix’s sponsorship pay after the birth of her daughter, and when she called them out, Nike changed their maternity policy. Recently, she partnered with Athleta and the Women’s Sports Foundation to provide financial support for women athletes who need child care during Olympic training. After experiencing life-threatening preeclampsia during her pregnancy, competing in the 400-meter dash at this year’s Games is Felix’s triumphant return.

Back for her second Olympic Games, Ashleigh Johnson was the first Black woman to represent the United States in water polo. She is considered one of the best goalies in the world, and she led the USA team to gold during the 2016 Games in Rio. Out of the water, Johnson is a vocal advocate for racial equality. In 2018, she helped develop a swim program for underserved children, and she has suggested that she will violate the International Olympic Committee’s Rule 50, which bans demonstrations of support for “political, religious, or racial propaganda.”

With a career spanning nearly 15 years, Alix Klineman is a first-time Olympic competitor for the U.S. Volleyball team. An indoor and beach volleyball pro, she played overseas in Italy for three years and in Brazil for two years. Off the court, Klineman has spoken out about women’s health in sports, particularly the stigma surrounding periods and hormones. She struggled with side effects from birth control pills and advocates for women taking control of their menstrual health. She was named part of the Association of Volleyball Professionals Team of the Year in 2018 with her longtime beach volleyball partner April Ross and will compete with Ross.

Officially representing Japan, Naomi Osaka is making her Olympic debut as the #2 tennis player in the world. A dual citizen, Osaka was born in Japan and has relinquished her U.S. citizenship to represent her country of birth. Recently, she withdrew from the French Open and Wimbledon competitions to take time for her mental health. Her decision to withdraw was highly praised by those in the sports and mental health communities. It is only fitting that the Olympics set the stage for the return of one of the world’s greatest tennis players.

Recently named the co-captain of the U.S. Olympic Swim Team, Simone Manuel almost didn’t make it to the Olympics at all. Earlier this year, she was diagnosed with overtraining syndrome, an exercise-related condition that can result in accelerated heart rate, fatigue, muscle aches, and depression. Manuel was experiencing the effects of overtraining during the Olympic trials, and her race times took a hit. She did not qualify for her typical 100-meter sprint for the Olympics, but she will compete in the 50-meter sprint. She is on a recovery journey to improve her health, and hopefully, a medal at this year’s Games will boost the process.

She’s only 19 years old, and she’s on the inaugural U.S. Surfing Olympic Team—it doesn’t get much better than that. Marks started surfing when she was 3, and at 15, she was the youngest person to qualify for the World Surf League Championship Tour. After receiving critical comments about her body on social media, she became an advocate for body positivity and speaks out against body shaming. Last year, she graced the Sports Illustrated swimsuit issue, and this year she’s going for her first Olympic medals.

18-year-old Grace McCallum might be making her Olympic debut this year, but she is no stranger to competing with the best of the best. McCallum was on the 2018 and 2019 gymnastics world championship teams alongside Olympic teammates Simone Biles and Sunisa Lee. In January, she broke her hand, leaving her Olympic fate in question. After a rigorous recovery process, McCallum is an Olympic first-timer to keep an eye on.

Naya Tapper is a track star-turned-rugby standout who is competing in the Olympics for the first time. She wanted to play rugby in high school but didn’t explore the sport until she walked onto the team at her alma mater, the University of North Carolina at Chapel Hill. Tapper has put in the time (she’s been playing professionally for five years) and work to represent the U.S. in rugby. She has competed in the HSBC World Rugby Sevens Series and the Women’s Rugby World Cup in Ireland.

Soccer phenom Crystal Dunn is looking to regain the title and go for gold with the U.S. Women’s National Soccer Team (USWNT). The last few years have been busy for Dunn with multiple championships, a team change, a position change, and now a highly anticipated Olympic performance. Back for her second Olympic Games, she’ll be asked to help the team in the attack and shore up the defense from the left-back position—the position she’s adapted well to since transitioning from forward to defense for the team. The USWNT’s semi-controversial loss to Sweden during the 2016 Rio Games was a big upset, but with other soccer greats like Christen Press, Megan Rapinoe, and Becky Sauerbrunn on this year’s team, the USWNT is a true force.