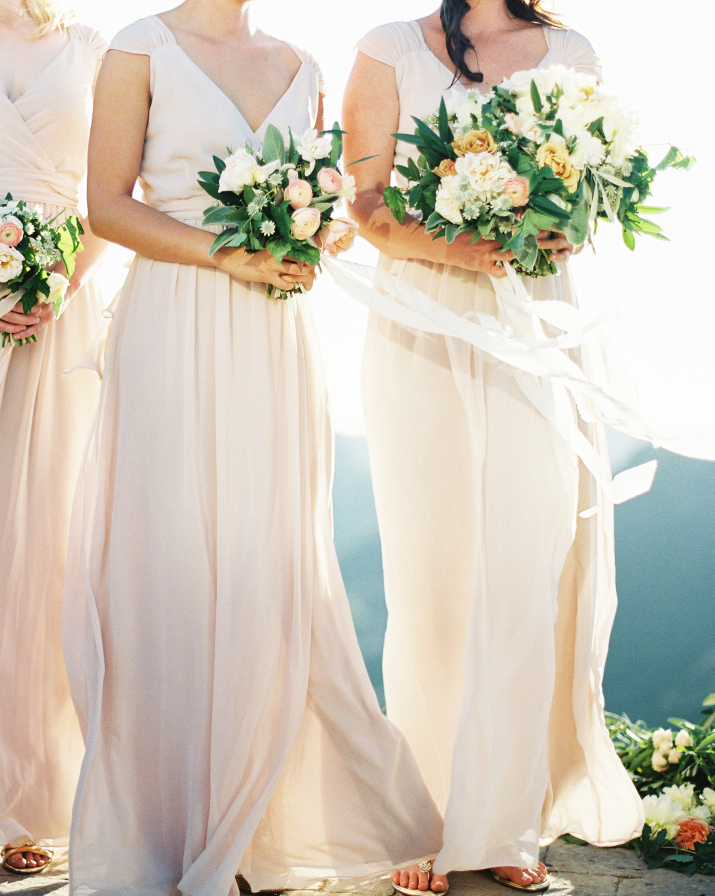 Being a bridesmaid is no small task. This long-standing tradition and custom has held popularity for many years for different societal reasons, but in today’s world, it mostly serves a sentimental purpose…while delivering multiple opportunities for stress.

Here are strategies to deal with 12 common bridesmaid dilemmas, so you can stay supportive and sane during your friend’s big day.

1. You agreed to be a bridesmaid before doing the math.

Your best friend asked you to stand up next to her during one of the most special moments of her life, and you said yes! Now, as you look forward to the event, you start to plan and…gulp…picture your savings slowly slipping down the drain. The dress, hair, shoes, makeup, accessories, travel, lodging, showers, parties, cards, and gifts (the bare minimum these days) can send costs soaring upwards of hundreds or even thousands of dollars.

First, decide if being in the wedding is worth budgeting for. Take a look at your finances and ask yourself where you could potentially pinch pennies and where there is no wiggle room. And then talk to the bride. It might be a little awkward at first, but be honest about what you can afford without shame or guilt while emphasizing your excitement for being a bridesmaid. A good friend—and a reasonable person—will not only understand without offense, but help you figure it out, whether that means a cheaper look-alike dress, DIY makeup, or skipping the extra gifts. 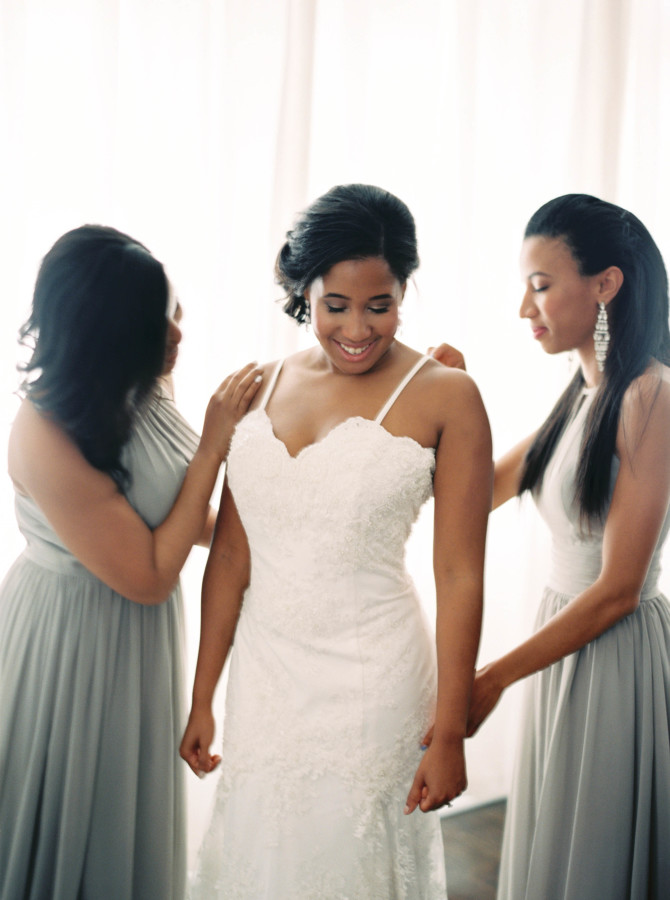 2. You’re the outsider in the bridal party.

A friend of mine shared that she was once in a bridal party as the only person outside of their high school friend group . . . as well as the only one left out of the collective gift to the bride. Ouch. The negative feelings that surround being left out can be just as painful as adults as they were back in second grade. It can feel awkward, frustrating, and downright painful to be the outsider!

If you happen to land on the side fringe of #TeamBachelorette, take it with a grain of salt. Remember that everyone wants to feel important, and every bridesmaid often feels like he or she should be (or is) the bride’s number one bae. But your friend who is getting married asked you to be a part the celebration for a reason, so keep that feeling of being chosen and wanted close to your heart.

Find an opportunity to connect with the bride one-on-one, without the intensity of the group dynamic, and ask if there’s another bridesmaid that you might connect with specifically since you came from a different hometown/went to a different school/didn’t belong to the sorority/whatever.

3. You aren’t the biggest fan of the other bridesmaids.

The people that your friend selects to be in her bridal party may be very different than you’d expect—and not in a good way, either. If you discover that you can’t stand the other bridesmaids for whatever reason, my advice is this: Be nice. Easier said than done, of course, but chances are high that you’re only going to be around these folks for a certain set of hours, so find a way to get through it without snapping, judging, criticizing, or rolling your eyes. You don’t have to become best friends with the other bridesmaids, but you do need to be polite and tolerant of your differences. Besides, who knows? As you get to know them, you may have more in common than you originally thought. 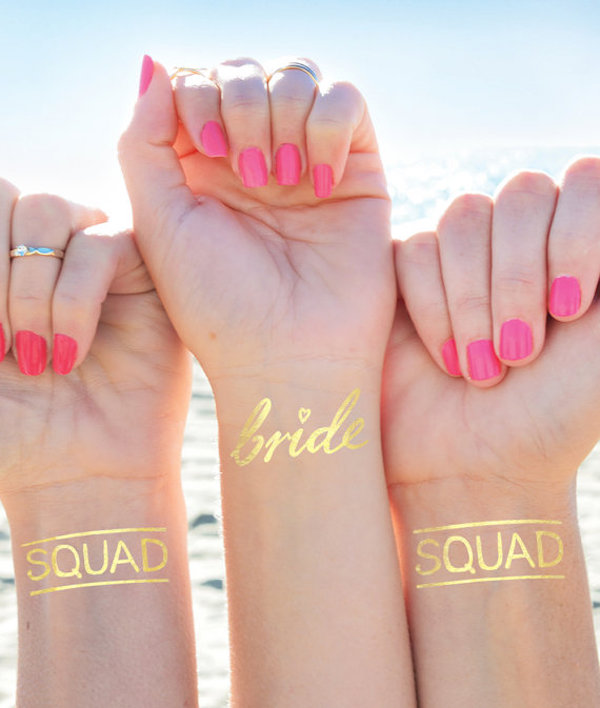 4. You don’t want to attend the bachelorette festivities.

Bachelorette parties, these days, can be a little tricky to navigate. First, many have recently swung from a simple night out on the town with your best buds to lavish getaways that involve a plane ticket and paid time off work. Second, it can be hard to justify spending that kind of time, money, and energy on a group of people that you barely know, especially if you and the bride do not share the same social circles.

But as one of my girlfriends puts it, “Give people more credit—they’ll figure out how to make small talk, get along, and get to know each other. It’s really not so bad.”

And it’s not! In fact, it can actually be sort of fun to become acquainted with the arc of the bride’s inner circle. Not to mention that as a bride, there is something quite special and amazing about seeing all of your besties across years, places and versions of yourself, all linked up in one place to support you. If you really cannot attend (say financial reasons), be honest and open upfront. Don’t put off the hard conversation! 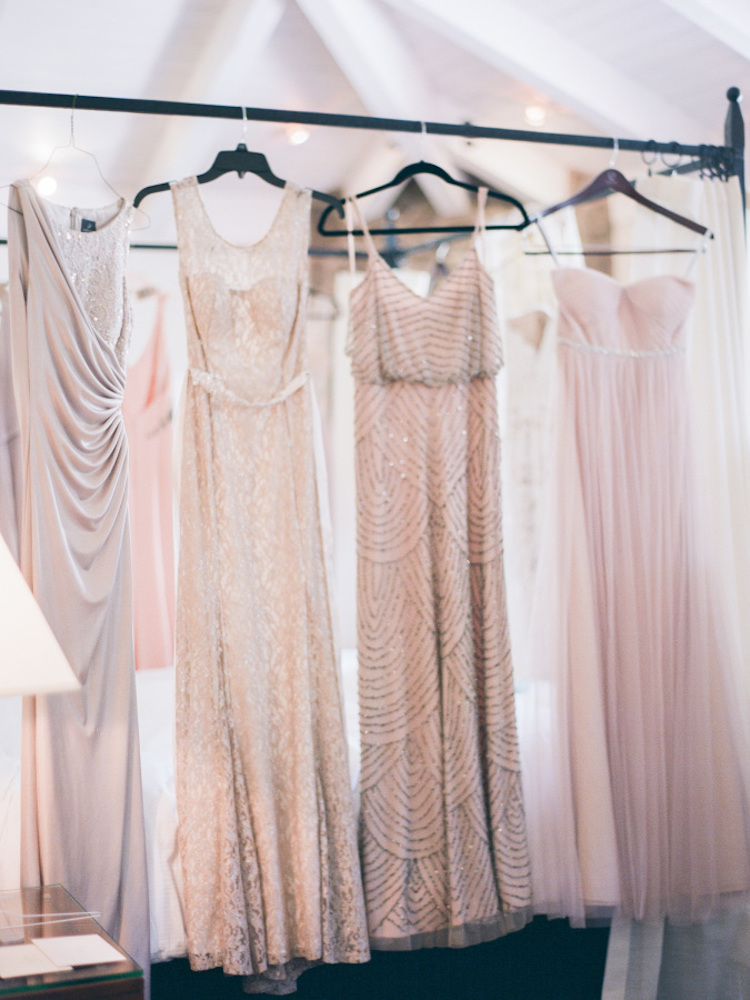 5. You’re on the receiving end of annoying, unsolicited relationship advice.

Sigh. If you’re not married or engaged, and you’re attending a wedding, prepare yourself to receive some advice from well-meaning acquaintances, strangers and even family members. Statements like, “Don’t worry, your turn will be coming soon!” and “It’ll happen when it happens” and “The right one could be just around the corner!”—even if you’re, you know, completely fine and content regarding your love life. Hell, even if you are married, you can still be subject to the wink-wink, nod-nod that accompanies stories about how to keep the romance alive.

To cope? Take a deep breath, remind yourself that people generally are trying to be nice, and change the subject to something more interesting like your career, your new creative project or your thoughts on the upcoming election. (Just kidding on that last one.) Remember that your relationship status, or lack thereof, is not a testament to your worth or value as an individual. Engagement and marriage can certainly enhance our lives, but they aren’t the be-all, end-all goal or journey to happiness or contentment.

6. Your bride insists on planning (aka, controlling) everything.

There are two types of brides, generally speaking: those who like to sit back and be celebrated by others, and those who want to do all the planning regarding every single wedding-related celebration. (Like that friend who sent you an itinerary for her bachelorette getaway complete with a list of restaurant reservations!) The best you can do is gently remind the bride-to-be that you’re happy to help take the lead for any festivities in her honor, so that she can be present, appreciative and stress-free. If she still insists on handling the details, let her—all you can do is offer to help.

7. You’re part of the never-ending group chat or email chain with wedding questions.

There’s really no way around this one, but you can be tech-savvy to protect your sanity and attention span. Set up a folder in your email inbox called “So-and-so’s Wedding,” and then move all emails over said folder until you’re ready to dive in. And if your phone won’t quit lighting up with text after text, you can usually activate a “mute setting” to silence or hide incoming messages and subsequent notifications until you actually want to see what all the conversation and fuss is about. 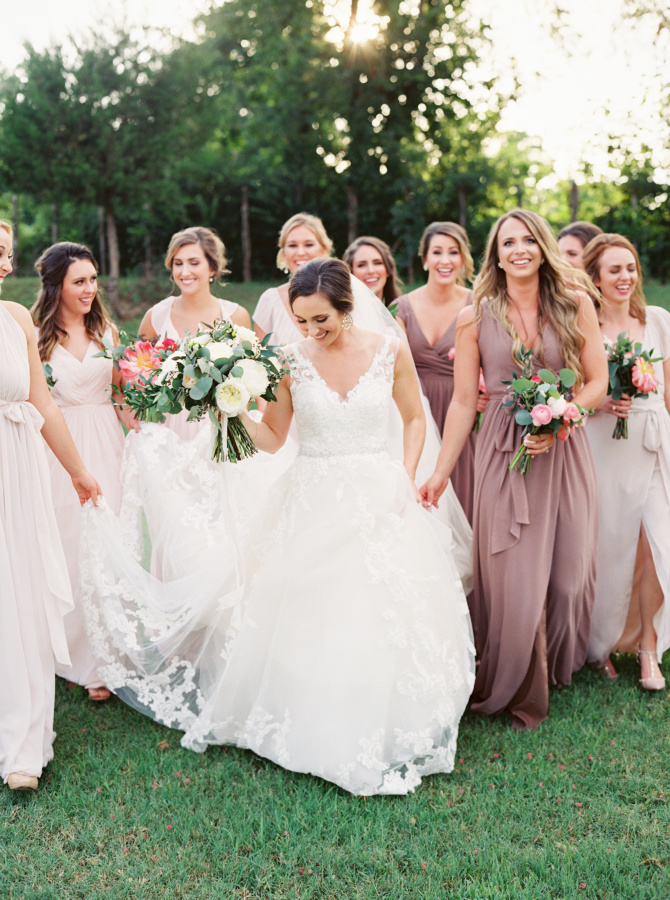 Mom versus bride, mom versus MOH, sister-in-law versus bridesmaid—the drama that arises at a wedding can be unbelievable. Do your best to stay out of it completely. Don’t join in the whispered gossip between family members over cocktails; if someone drunkenly confides in you, be a good listener and then seal your lips. And when you’ve listened to Aunt Mimi’s third story about how she liked the bride’s ex-boyfriend better (groan), excuse yourself to the restroom or the dance floor or to the cute guy across the reception standing alone. A simple, “It’s been so nice chatting with you, but I need to step out for a moment. Enjoy the party!” will suffice.

9. Your dress/hair/makeup for the wedding looks terrible.

I once got my makeup professionally done for a wedding as a bridesmaid, only to see myself in the mirror afterwards and discover that I looked…completely overdone. The bride, however, looked like a total bombshell and kept insisting that I appeared fine.

I felt conflicted—I didn’t want to offend her by removing the makeup, but I did not want to look the way I looked right then, either. So quietly, off to the side, I asked the makeup artist to take it all off, and then hurridly did my own touch-ups without falling out of step with the group. Did it matter what I looked like on my friend’s wedding day? No, not really. But did it allow me to be calmer, happier, and therefore more authentically supportive of my friend? Yes.

Sometimes you have to wear the ugly dress to make your friend happy. But if you have the ability to change one small thing up without impacting anyone’s timeline or burdening the bride with a minor problem, take care of it as quickly as possible. 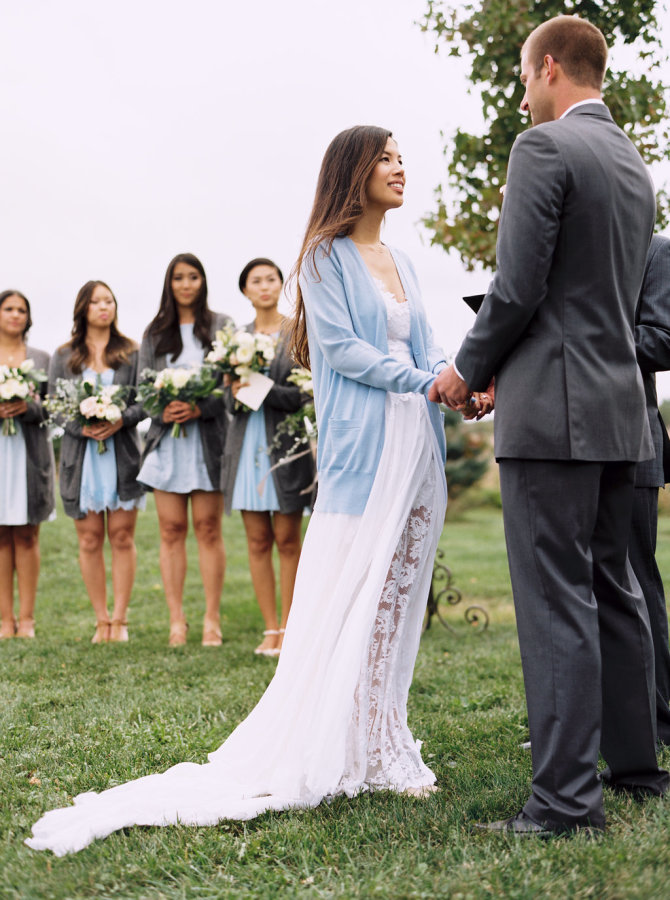 When my cousin got married, I fully expected to stand up in her wedding…but she didn’t ask me. I tried my hardest to ignore the pangs of jealousy and confusion leading up to the big day, and told myself that it wasn’t a “big deal.” Except it was.

I had genuine hurt feelings, so l later, I ended up telling her exactly that. She explained how she had a hard time deciding who to include, and as I listened, I realized that it actually, honestly, didn’t matter too much. I knew that I was important to her, and that was enough—and I had a total blast at her wedding. (Plus I had tons of time to get to know one of the groomsmen, my now husband. True story.) If you thought you would be in your friend’s wedding, and you’re not, and it bugs you, talk to her.

There’s no reason to make it petty or force her to feel guilty for her decision, but it is definitely OK to share your feelings and reiterate that you hope to remain an important part of her life.

11. You expected to be a bridesmaid, but there’s no bridal party.

Similarly, a bride-to-be friend of mine recently decided to skip bridesmaids altogether—which is becoming a popular trend. I can see why: You get to avoid the “who’s in” and “who’s out” debate altogether, and put the focus entirely on you and your future life partner. But if, again, you expected to share in the celebrations in the role of bridesmaid, only to learn that that tradition isn’t being upheld, it’s natural to feel a little disappointed.

Try to let it go, and remember that it’s not about you; it’s about what your friend wants and what feels authentic to her and her spouse. And then brainstorm all the ways you can throw confetti and cheer from the ceremony seats as part of the larger group of witnesses! 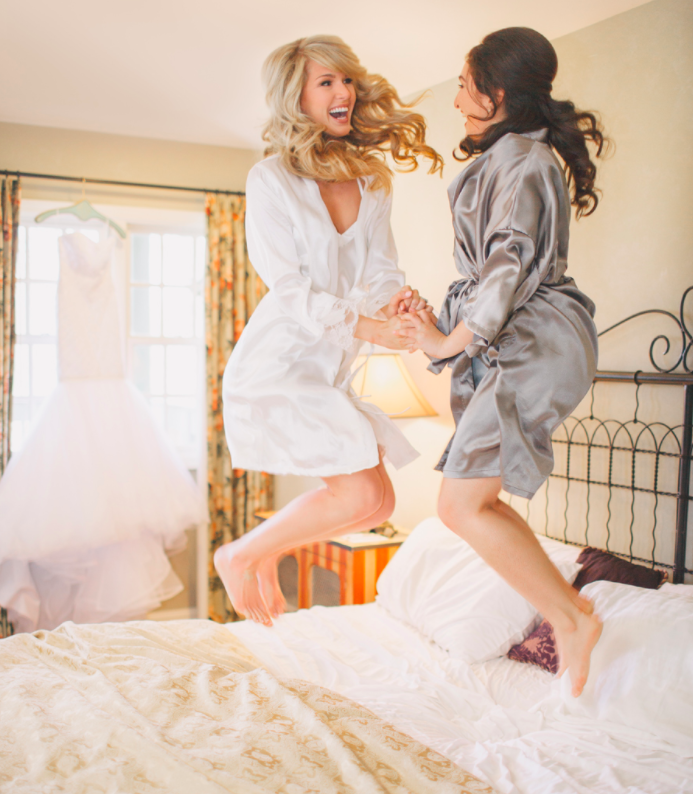 12. You’re letting one day come between you and your friend.

If the whole process of becoming and being a bridesmaid is getting you down—to the point of starting to actively dislike your friend, the bride—then come back to the basis of your friendship. The wedding is an important day, to be sure, and most likely a memorable one, but it’s also just one day in a (hopefully) long friendship. Ultimately, you are the only one in charge of your mindset toward all things bridesmaid-related, so practice gratitude instead of attitude.

What bridesmaid dilemmas have you encountered, and how did you deal? Tell us your best and worst stories!