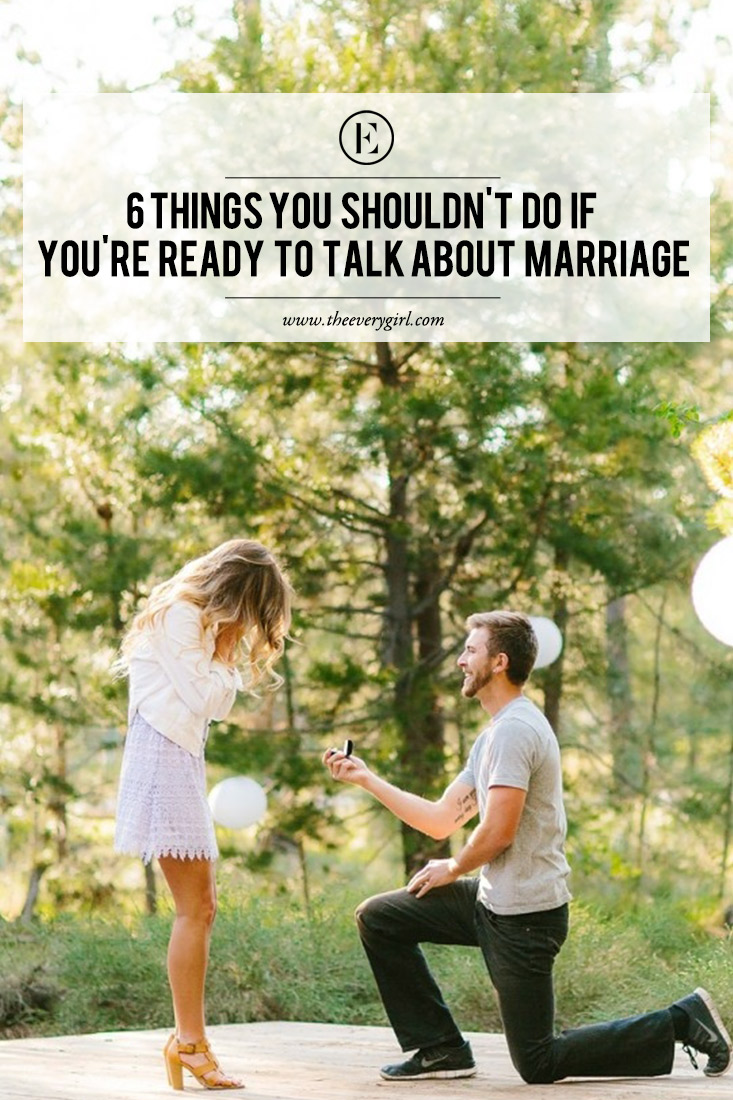 After dating for nearly three years and knowing we were on the path to marriage, I asked my boyfriend directly when he imagined us becoming engaged. We had a couple of discussions where I laid out my expectations and he his before reaching an approximate window of when we both thought we’d be ready. I later told a friend about these discussions, and she responded, “I would never bring that up! You should just wait for him to propose when he’s ready.”

CURRENTLY TRENDING / SEX & RELATIONSHIPS
Calling All Couples: This Will Take Your Sex Life to the Next Level
❤️
READ MORE

What? No, thank you. This huge next step was 50 percent about me, and I had the right to know where my (and our) life was headed. From that exchange, I’ve determined six things you shouldn’t do if you’re ready for marriage.

In a relationship, the choice to date each other is mutual. The act of marriage is a team endeavor. Marriage counselors, therapists and ministers suggest discussing every possible expectation for life as a married couple before marriage. So doesn’t it make sense that engagement—and the discussion of a future—should also be joint process? I’m not saying you and your partner should mutually propose to each other or plan out the exact date, time and location you’re going to become engaged (a little mystery and excitement can make the moment even more special), but engagement should not be taboo subject.

Through an honest discussion, you’ll find out if you’re on the same page. Is marriage important to both of you? Will it add something to the relationship or are you both content continuing to be together as you are? Are you still in love with each other or merely comfortable? Do you want to be married (as in, you’d elope if you had to) or just plan a fun wedding? With America’s divorce rate as high as it is, marriage should never be entered into with a shrug or blind faith. Discussing engagement opens up the window to many important questions about your future together, and may even reveal that you don’t have a future together at all.

In an effort to prove they are not “that girl”—the demanding girlfriend who requests a proposal on her timeline—too many women don’t say a word about wanting to be engaged, bottling up their confusion, anticipation and frustration. If you are expecting or desiring a proposal, closing your eyes and hoping it will happen won’t get you anywhere.

Pretending you don’t care is a dead end, too. There are plenty of women who truly don’t feel the need to get married and are totally fine with long-term dating. If that is you, great! But if it’s not, no amount of forcing will change how you feel. There is nothing wrong about wanting to commit to a lifetime with someone, so for heaven’s sake, don’t feel guilty. Listen to yourself and acknowledge your needs.

I get why women (myself included) drop hints—it’s so easy! You can put feelers out there, gauge a reaction and if you come under suspicion for your hinting ways, there’s no damning evidence because you didn’t actually say anything. So sneaky.

But while it’s easier to hint, this approach very rarely accomplishes anything. Women shouldn’t need to resort to petty games in place of having a grown-up discussion. When you’re unhappy about something down the road, are you going to drop hints to your husband in hopes that he picks up on them? Your partner can’t read your mind—say something. Any person who is serious about a future won’t freak out at the mere mention of marriage. If he or she is not respectful of and responsive to your efforts to have an honest discussion, maybe you have your answer right there.

4. …make the discussion about a ring

Avoid bringing up engagement in the context of a ring. If a diamond (or sapphire or emerald) ring is important to you, that’s fine. Say it once and then back off. The more you bring up the rock, the less the issue is about the actual engagement and marriage. Also, rings aren’t cheap. Just as you cannot make money appear out of thin air, neither can they.

If you’re secretly expecting your significant other to plan out an elaborate proposal, consider that this might take a bit of time, too. Proposing is already a big deal; planning a special one takes it up another notch.

In either case, you’re absolutely required to be more patient. If waiting bugs you that much, it’s time to adjust your expectations.

Say what you feel directly, clearly and honestly. State your intentions and expectations. Listen to theirs, as well. And then let it go.

5. …talk about how everyone else is doing it

Similar to #4, you should avoid making your engagement about anything other than the two of you. It is insanely hard not to compare yourself to others, especially in the age of invasive social media. First you see your friends traveling the world, then in a happy relationship, then engaged, then married. Then they buy a house and have a child, and it all looks so fun and perfect. You feel like you’re falling behind, and it’s rough. Ugh.

The simple truth is, though, that there is no right time to get married. Just because your friends are getting married at 27 doesn’t mean you should be getting married at 27. Using this as an argument for getting engaged comes off like you’re trying to win a competition, not grow your relationship.

Reflect on whether you not only truly want this, but are also ready for this. You can be in love with your significant other and still need some time. Take a deep breath, block out the noise and focus on the two of you.

There should be an element of trust and respect that your partner hears you. I will admit that I didn’t do very well in this area when I was ready for engagement. I brought up the topic one too many times after our initial discussions. Letting my curiosity/anxiety manifest into a game of 20 questions only made my boyfriend, and me, feel worse. Feeling a lack of control is frustrating, but having a discussion (see #1) is your form of control. Say what you feel directly, clearly and honestly. State your intentions and expectations. Listen to theirs, as well. And then let it go. There are two of you involved; you don’t get to call all the shots.