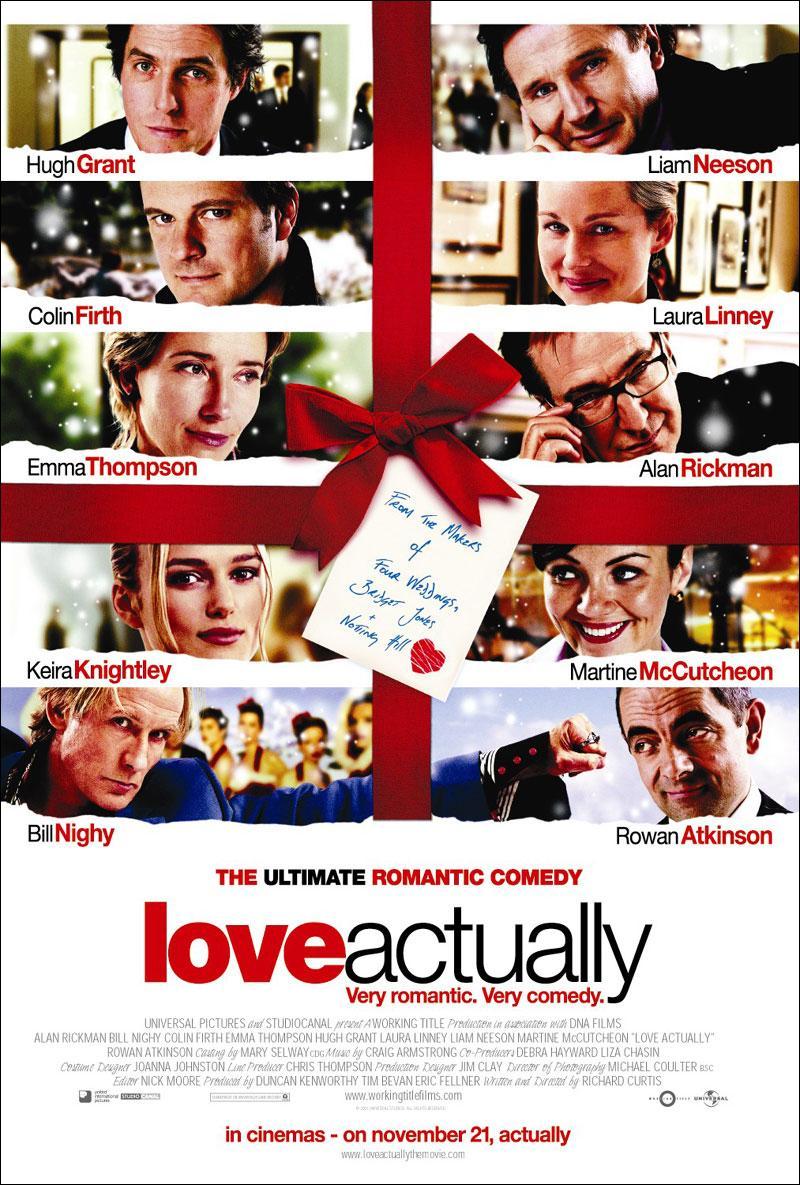 Whether you find it cheesy and boring or watch it every day starting November 1st like I do, there’s no denying the genius that is Love Actually: the movie that is the mash-up of your favorite rom-com and holiday flick. It not only makes even the most Bah Humbug-y Scrooges sing and dance along with Christmas Spirit (Johanna’s All I Want for Christmas is You scene, anyone?), but it also takes on the difficult task of actually defining what love is.

It’s been over ten years since the film was first released, which means I’ve watched it at least hundreds of times each Christmas season, and it never stops teaching me new lessons about relationships. (Is it sad that I get my emotional education from a holiday comedy from 2003?) Either way, here are the main things that Love Actually has taught me about relationships.

If your maid/cleaning lady/housekeeper happens to be a cute Portuguese woman who risks getting attacked by eels by jumping in the water to rescue your book pages, there’s a pretty good chance she’s into you and you should just ask her to marry you. Maybe this is a specific case for Colin Firth, but of the billions of people in the world, your soulmate could be someone who doesn’t speak the same language, lives far away, or comes with many inconveniences. But when you know, you know, same language or not. If a relationship is worth having, you won’t have to question it. As Jamie says in broken Portuguese that he learned in maybe two weeks, “I know I seems an insane person — because I hardly knows you — but sometimes things are so transparency, they don’t need evidential proof.”

2. Love is putting their needs before your own.

When we find out that Sarah has been pining over Karl (affectionately known to fans as “Hot Karl”) for years, we think this storyline will be about their romance and *obvious* chemistry. But, in the moment that Sarah and Karl might finally get together after the Office Christmas party, we find out that Sarah must leave Karl in order to care for her ill brother. Why is she leaving!? We scream at our television screens. What about Hot Karl’s abs?? But in a tender and sweet later scene that shows Sarah and her brother embracing over a simple Christmas gift, we learn that Sarah knows her brother needs love more than she does, and her love for her sibling overpowers whatever she wants for herself (like Hot Karl). Real love is selfless, and it means giving your loved one more love than you seek for yourself (or spending Christmas in a mental hospital rather than with Hot Karl).

3. Love makes you a better version of yourself.

Prime Minister David (Hugh Grant) only finds the courage to stand up for Britain because of his feelings for Natalie, Jamie learns and conquers an entire new language for Aurelia and goes to ask her to marry him when he barely has spent much time with her (and hasn’t spent any time with her where she wasn’t on duty as his cleaning lady), and finally, my very favorite scene from any movie ever, 11-year-old Sam (after learning to play an instrument to get Johanna to notice him) runs through the airport, outrunning the security guards, just to tell his “one” that he loves her *cue ugly cry*. Love gives us the courage to be brave, to face challenges, and to conquer the world, whether it’s in British politics or playing drums at the holiday school program.

4. Joni Mitchell is the only soundtrack you should be listening to if your heart is broken.

If you’ve seen the film, you can’t forget about the scene in which Emma Thompson, usually a strong, sarcastic, and selfless mother, allows herself a moment of private heartbreak when she discovers her husband (Alan Rickman) might be cheating. She silently cries along to Joni Mitchell’s “Both Sides Now” playing on her stereo (2003 was a simpler time), wipes her tears, and fixes the blanket on the bed before coming back to the living room to her family, proving that Joni Mitchell just gets it — you really don’t know clouds at all, once you realize your husband is cheating. Especially when that husband is Severus Snape.

5. Romance is a little awkward.

One of the most genius ploys of the film is that it does not depict love to be like a fairy-tale storybook or a Hollywood rom-com starring J-Lo. As beautiful, sweet, and sob-worthy as these love stories are, they are also awkward. Sarah’s weirdly spastic 3-second dance on the stairwell while Karl waits for her in the doorway (that begs the question of why she needed to leave him waiting just to do that), Hugh Grant getting caught dancing, which is just as hilarious as it is iconic, and Jack and Judy’s adorkable relationship (see: the awkward first kiss — it’s simultaneously cringe-worthy and sweet). Love is sometimes awkward, because of how much it forces us to care. And the awkwardness is maybe even a little more romantic than whatever smooth, sexy, moves Kate Hudson or Matthew McConaughey have in the latest Blockbuster.

6. Sometimes, friendship is the best kind of love.

Remember the sweet scene when Billy Mack leaves Elton John’s Christmas Eve Party to be with his “fat manager” (his words not mine)? Besides the distracting fact that the manager is wearing denim-on-denim way before it became cool, the scene is also confusing in what kind of love this is. We’re made to believe this is a romantic comedy, but when Billy awkwardly spits out, “I’ve gone and spent most of my adult life with a chubby employee. And as much as it grieves me to say it, it might be that the people I love is, in fact, you,” we learn that soulmates, and love, come in all shapes and sizes, and can be in the form of a friend, or a chubby employee — whatever floats your boat, Billy. Or what about when Mark hides his desperate and borderline stalker-ish love for Juliet, his best friend’s wife, and only tells her he loves her “without hope or agenda,” because he cares more about his best friend than he cares about getting the girl of his dreams and video-recordings? Sometimes friends really are our soulmates.

7. Love actually is all around.

This movie isn’t just a rom-com — it’s a movie about relationships of all kinds: parent-child, husband-wife, unrequited love, friend love, sibling love, new love, old love. It shows that relationships are all different; falling in love as a child is different than falling in love as an adult, and love for a friend or sibling or child might be more important than love for a romantic partner. But most importantly, this film shows that love is everywhere. It may not always be significant or as newsworthy as the latest world tragedy, but it’s persistently around us. As Hugh Grant’s opening monologue says, “General opinion’s starting to make out that we live in a world of hatred and greed, but I don’t see that. It seems to me that love is everywhere. Often it’s not particularly dignified or newsworthy, but it’s always there… Love actually is all around.”

But if you still can’t find it, I suggest checking out the arrivals gate at Heathrow Airport — seems like there’s a lot of it there.