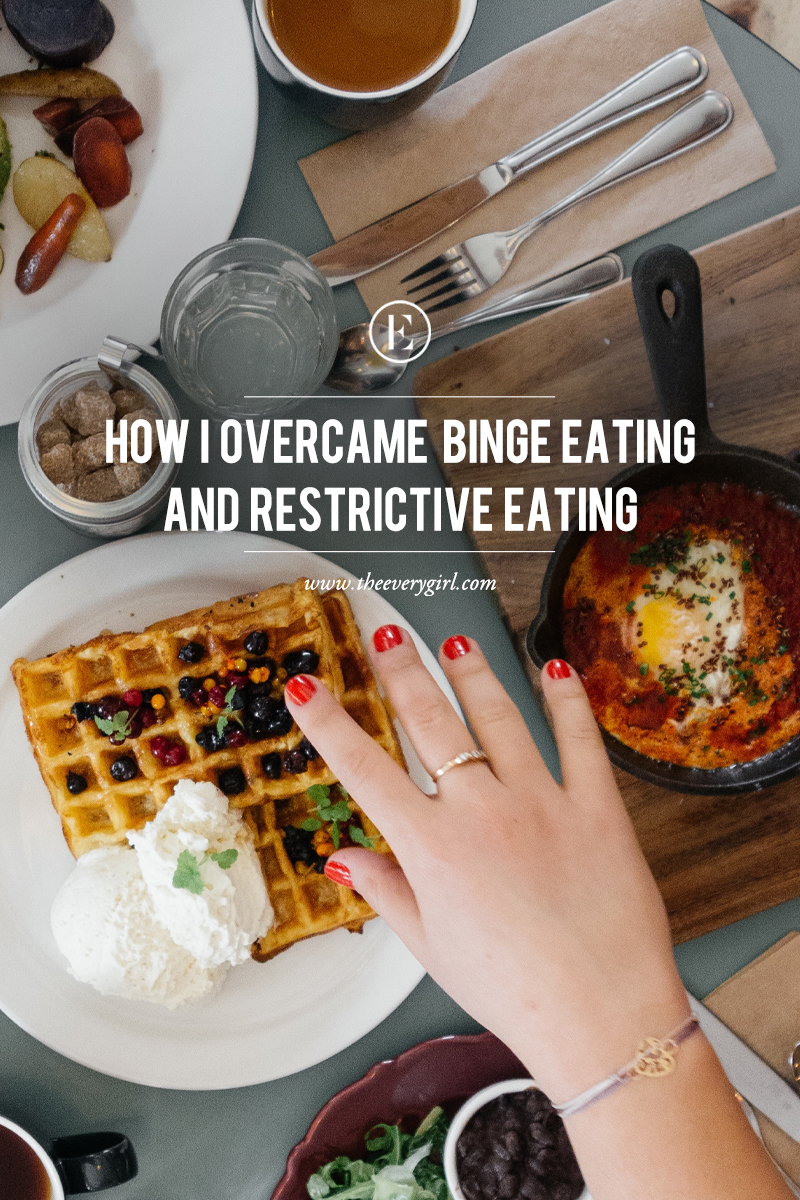 I grew up in a household filled with food and a mind filled with insecurity. Throughout my teen years I obsessed over my weight and always fluctuated between opposite ends of eating extremes. I was overcome with an unquenchable need to fit in—to be pretty and popular and thin. It’s the standard teenage story, right? I’m 25 now, and I can see very clearly how much all of those things didn’t actually matter. But then? It was a different story.

I convinced myself that being thin would make everything else better. I often skipped breakfast and lunch and came home, exhausted and ravenous, feeling like a complete failure as I ate everything in sight in my kitchen. From restrictive eating to binge eating, I ran the gamut of eating extremes. It was a cycle—one that caused me stress and guilt—and it was something I just couldn’t stop. Food was all about control. When I was following patterns of restriction, I felt like I was in control. When I fell into a cycle of binging, I felt like I had lost control.

These cycles continued for years, but as I got older it was binge eating that became my main source of contention. Most people looking at me wouldn’t have known I was dealing with any eating issues; I was active, physically healthy, and always an average weight. But when I was alone I would often mindlessly snack, continuing to eat until I was physically uncomfortable, and long after the initial feeling of hunger or boredom had faded. By this point I had come to feel very guilty about my relationship with food, but I didn’t know how to make myself change.

Looking back now, I can see that it wasn’t an exact moment, but rather a series of small discoveries that led me to slowly shift my eating habits.

Looking back now, I can see that it wasn’t an exact moment, but rather a series of small discoveries that led me to slowly shift my eating habits. Toward the end of college I started teaching myself how to cook. I learned about ingredients and how to make food taste good. I found a cooking guide on The Everygirl and plowed through the recipes with excitement and zest. I began to learn that eating quality food could make me feel good.

A few years later another shift occurred that led me to evolve a little more. I was stressed at work, rarely exercising, and commuting over three hours every day. All of these factors combined took a toll on my body. My once incredibly adaptive digestive system was not treating me well, I felt terrible, and out of necessity I had to make changes. I started exercising again, I truly started to focus on what (and how much) I was eating—over time I started to feel better.

Eventually, I was able to change my eating habits. Learning to cook was a small catalyst but being forced to deal with digestion issues was another. I had also gotten older and my values had changed. Instead of valuing appearance and being thin above all else, I had grown to value health and wellness.

I finally feel like I’ve made it to the other side of the metaphorical tunnel that is emotional eating. I have control over my eating habits now. Not the kind of control I used to crave, but the kind that allows me to stop eating when I’m no longer hungry; the one that makes me feel good about the choices I make.

Whether or not you have dealt with restrictive or binge eating, it’s likely that a family member or a friend has. It’s very common but not often discussed.

After more than a decade of dealing with these issues on my own, there are a few insights I’d love to share with women who may be going through something similar.

Focus on how food makes you feel.

I get that we’re not all Julia Child, but I really believe that by learning to cook everyone can develop a better relationship with food and their own eating habits. Start with simple meals. Start a few times a week. Just start somewhere.

Low carb! Low fat! Cabbage soup diet! I have an aversion to fad diets and it’s because they just don’t seem to affect positive change. I am all about making lifestyle changes, but a diet that is highly restrictive and only meant to last for a set period of time? Not my cup of tea.

Be conscious of what you buy.

I make a point to plan a shopping list before stepping foot into a store. Planning helps curb the inevitable temptation that occurs when I pop into Target for toiletries and find myself being mysteriously drawn toward the chip and cookie aisle. Know that the scale is not your best friend. I completely understand if someone needs to use a scale to track weight for health reasons. But if you’re weighing yourself to feed your ego (and if you’re doing it constantly), it’s probably time to take a break from the habit.

Be kind to yourself.

If (and when) you don’t eat well or eat more than you intended, don’t beat yourself up over it. It’s only going to cause you more stress and will probably lead to more overeating in the future. When you overeat, simply acknowledge it and move on. We’re all human after all.

If you have your own story or piece of advice to share, I would love to hear it in the comments below.