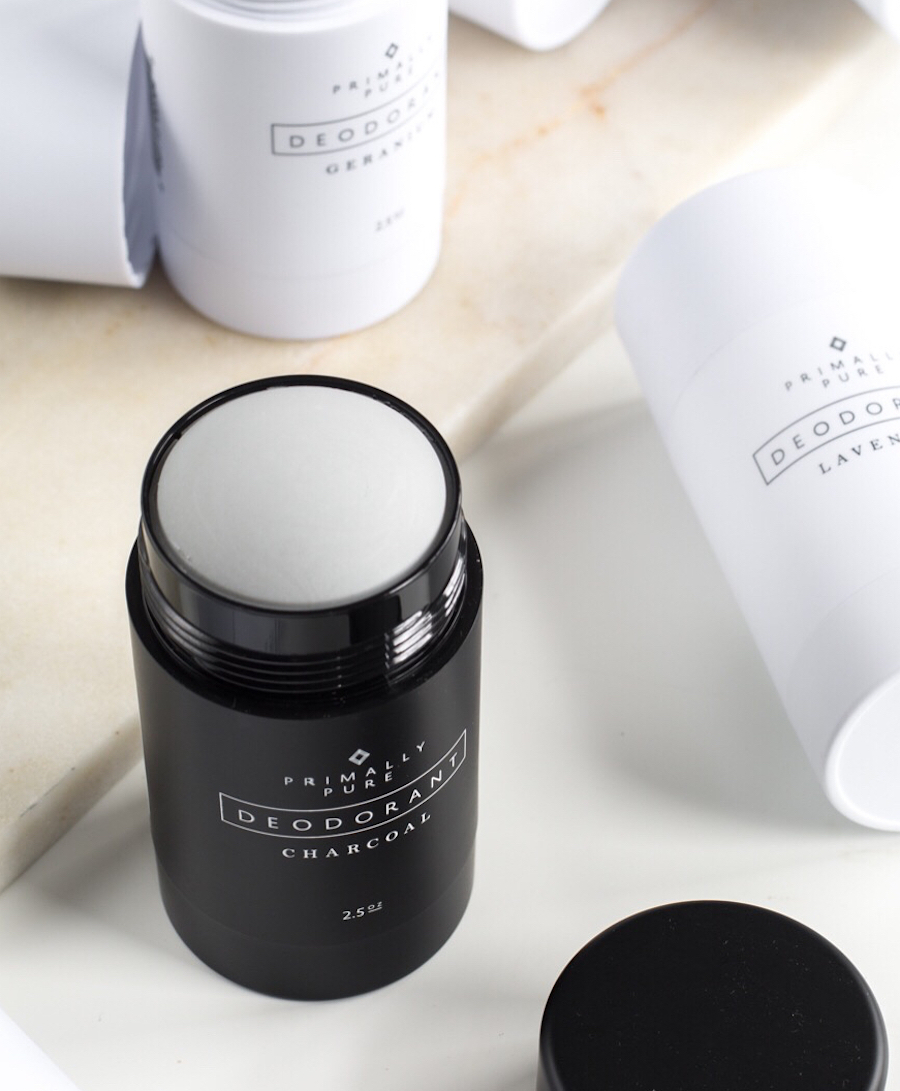 If I’m being honest (which I always am, of course), I can say that I’ve never given much thought to my deodorant before. I know that there are certain scents I like better, I know that my high school volleyball bag had anywhere from 2-5 sticks in it at any given time, and I know that I am VERY thankful that it exists. But truly — I didn’t give thought to what it was, how it worked, or what it was doing.

Now that I’m an ~actual~ adult, I’m making much more of a conscious effort to use natural products in my everyday life. I’ve switched over to natural laundry detergent and dish soap, and I’m trying to cut out artificial sweeteners in my coffee and tea. And I’ll be honest — it’s not easy. Natural products are often harder to come by, a little more expensive, and a little bit confusing (what does “natural” EVEN MEAN) — but I’m here to tell you about one switch I made that is simple and absolutely worth it (hint: it’s deodorant — you must’ve seen that coming!).

Wait — why should I care if my deodorant is natural?

First things first, let’s talk about the difference between deodorants and antiperspirants (Don’t feel bad if you didn’t know they’re different — I didn’t either!). Antiperspirants are what stop your armpits from excessively sweating, and deodorants are what keep your body odor in check. They’re not mutually exclusive, and you don’t need one to use the other. Antiperspirants can cause detriment because our bodies are supposed to sweat — it’s a natural release, and it helps keep our temperature regulated. If you’re not allowing those two things to happen, you could be preventing your body from performing at its highest capacity.

Alzheimer’s and Breast Cancer have both been linked to aluminum compounds found in antiperspirants, and the parabens found in typical deodorants AND antiperspirants have also been linked to Breast Cancer. The research surrounding this topic is ongoing, but I’m not one to take risks when it comes to my health (especially when the swap is so easy to make). Keeping my body safe from potential harm is one of my biggest priorities — so to hear that a product I use multiple times every day could be harming me was scary for me to hear. Additionally, the skin of our underarms is often super sensitive, so it’s important to ensure that the ingredients we use on it are safe and non-irritating.

What exactly is a natural deodorant?

A natural deodorant is exactly how it sounds — it’s a deodorant formulated using only natural ingredients. But tbh WHAT DOES THAT EVEN MEAN. At their most basic level, natural ingredients are words you can actually pronounce and understand: baking soda, charcoal, beeswax, and coconut oil, to name a few. Typically, to be called “natural,” a deodorant would be formulated without aluminum, parabens (chemical compounds used in cosmetics in order to prevent growth of bacteria), and any chemical known to irritate the skin. (Quick note: Since they don’t contain those parabens, natural deodorants should be used within six months. Pretty worthwhile trade-off, if you ask me!)

The charcoal version that I used contains kaolin powder, which is a powerful detoxifier, and non-nano zinc oxide, which soothes irritation and combats odor. Basically, natural deodorant gives you the odor protection you need with some skin-loving benefits you want. I FEEL GREAT ABOUT THAT. 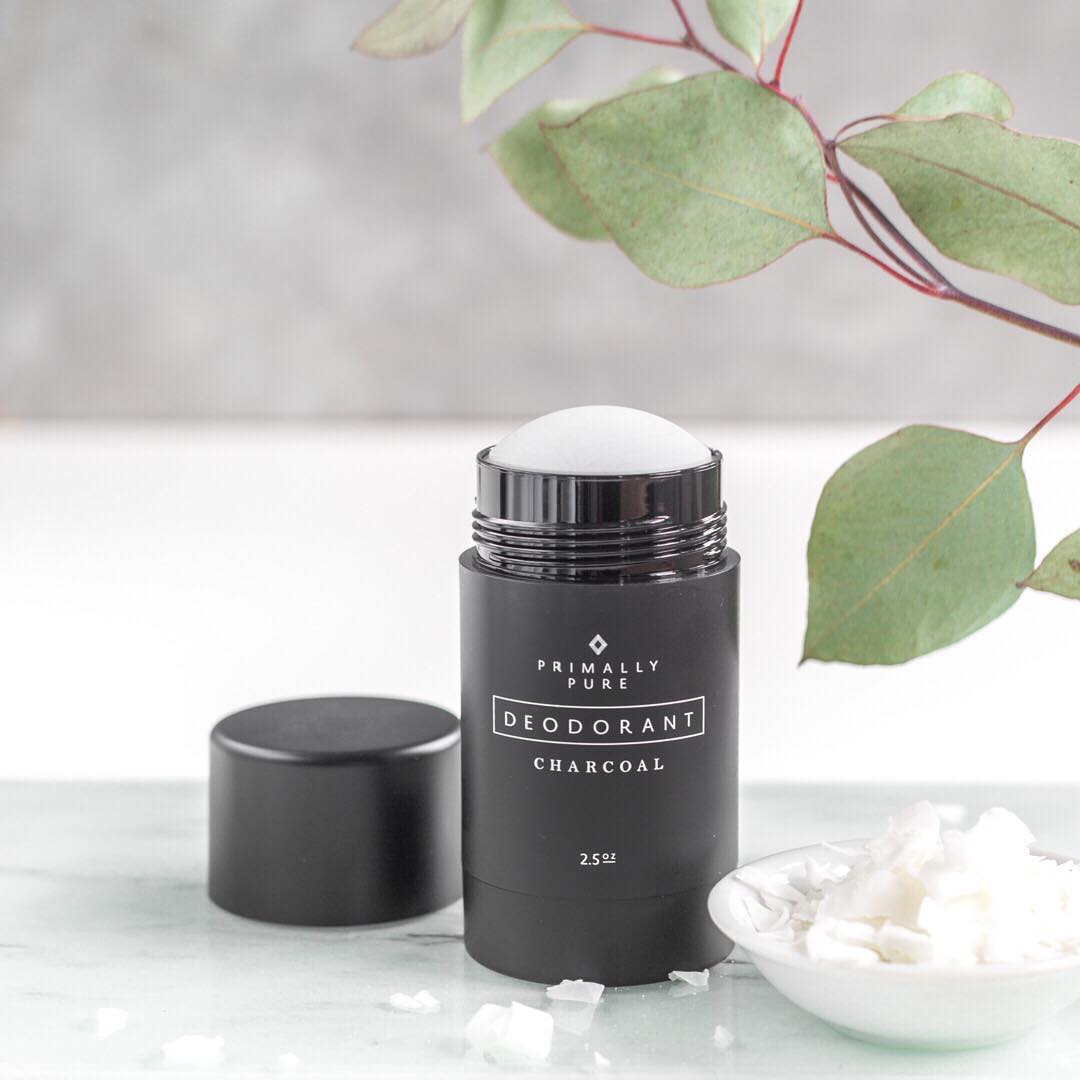 What happened when I tried it?

I tried Primally Pure’s Charcoal Deodorant for two full weeks — I’m a 24-year old active female, I work out 5-6 days a week, and I walk EVERYWHERE. My deodorant has a big job, so I’ll admit that I was skeptical — here’s how it all went down. 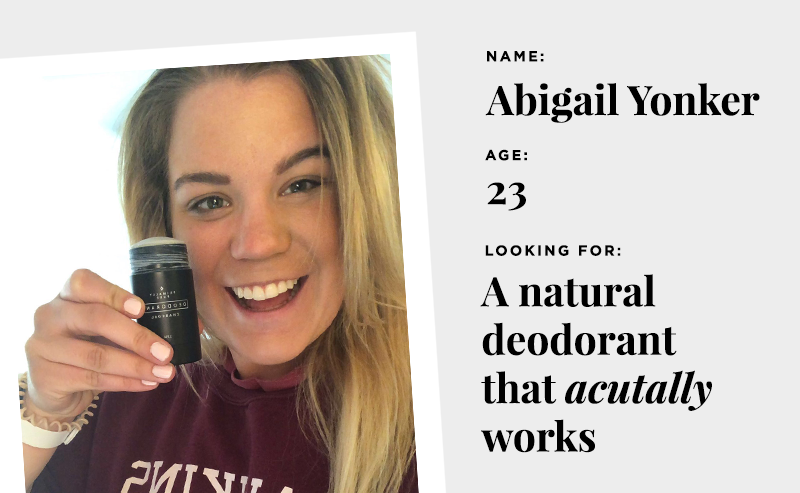 A few things to note: I love working out, and I hate change. I was so worried that a new deodorant would change the flow of my workout routine – that I would feel distractingly sweaty, and that it would make me resentful toward my daily sweat sesh (Another thing to note is that I’m kind of a sweaty person — thanks to excessive face sweating, I’ve never felt like one of those girls who can come straight from the gym to another event.). I was so worried that my armpits would sweat the way my face sometimes does — and that I would smell so bad I’d scare everyone away from the bike/elliptical/treadmill next to mine.

I’m not going to sugarcoat things and say that I immediately fell in love with the new deodorant. It is true that your body requires a bit of time to get used to the new all-natural product. There’s technically a bit of a “detox phase” — without the antiperspirant included in other deodorants, you WILL sweat a little more than usual as your body adjusts. But that’s not a horrible thing — let me assure you that it was totally bearable. Similar to the detox phase of a new skincare regimen, it might “get worse” before it gets better. But I can tell you firsthand that the payoff is worth it (and QUICK).

After a few days, I didn’t feel like I was sweating more than normal – in fact, I felt fresh as a daisy. Also, the scent is POWERFUL — I kept getting whiffs of it all. day. long. I’ve never used a mint deodorant before, but it’s not overwhelmingly toothpaste-y. It’s fresh, crisp, and CLEAN — pretty much exactly the vibe you want from a deodorant. The scent comes from a blend of eucalyptus and peppermint essential oils (See, I told you it’s all natural!).

An immediately noticeable benefit? The application is super simple, easy, and comfortable. The deodorant glides on smoothly and effectively. I’ve seen natural deodorants that are hard or in the form of powders and pastes (that you have to apply with your hands), but this one is a simple rolling glide-on.

By week 2, it didn’t even feel like I was still trying “something new” — the new deodorant quickly integrated itself into my routine. It’s pretty typical for me to reapply deodorant at least once or twice in a day (I always put on a fresh coat before the gym and after a shower, and I usually swipe a bit more on if I’m heading out on the town after work — not sure if it’s necessary, or if it just feels right).

I kept my Primally Pure deodorant with me throughout each day of the second week — just because the increased amount of sweating had subsided, I still wanted to feel as fresh as possible at all times. During week two, I probably put on the deodorant twice a day on average — once after my morning shower, and again after work before a workout. I felt VERY FRESH, but it’s nice to add an extra layer of scent protection — don’t nobody want to stress about body odor.

Another thing I don’t want to have to worry about? My deodorant affecting my clothing. I hate when deodorant stains clothing (either with white marks or with that weird oil-ish look), and this had none of that. I didn’t have to wait for my armpits to dry to feel like I could put my clothes on, and I didn’t worry about it again throughout the day. The deodorant in the tube is a charcoal color — but I never saw it appear that way on my skin or my clothes.

Additionally, I was noticing that the skin of my underarms was super soft. I have pretty sensitive skin, and this didn’t irritate it at all. Definite win!

While there were a few days of adjustment time (like I said, I hate change), I’m so glad I tried natural deodorant. There were truly no downsides — I felt just as protected and fresh, but I no longer have to worry about adding unnecessary chemicals to my skin or body. Quick note: The price point is indeed higher than what I’m used to spending on deodorant — but the peace of mind and added benefits are well worth the extra dollars.

I was a little worried that a natural deodorant would cause me to feel as though I’m sacrificing cleanliness or odor protection for the sake of safety — but that was NOT THE CASE. It worked AT LEAST as well as my old deodorant — I felt totally fresh, and within less than a week, I did NOT feel like I was sweating more than normal. I smell great, and my underarm skin is nice and smooth and non-bothered. AND IF THAT’S NOT ENOUGH, I don’t have to stress about the potential harm other deodorants and antiperspirants could be doing to my body. Win/win/win/win/win.

Okay, Abby, but is that really saying anything? you might be asking. And that’s a fair question, but here’s my answer: YES. Like I said, I exercise 5-6 days a week, and I live in Chicago without a car — I walk EVERYWHERE. It’s incredibly important to me to have a deodorant that works — so when I say that this one does the trick, you can believe me. I felt minty fresh all day long. 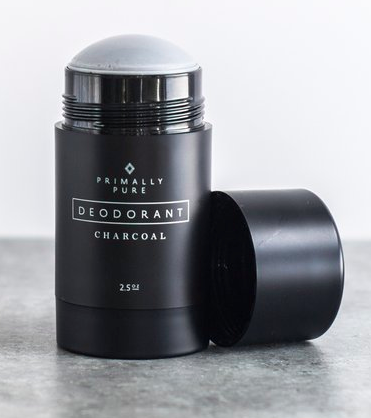 Do you use natural deodorant? Would you consider it? Tell us your thoughts in the comments!

This post was in partnership with Primally Pure, but all of the opinions within are those of The Everygirl editorial board.