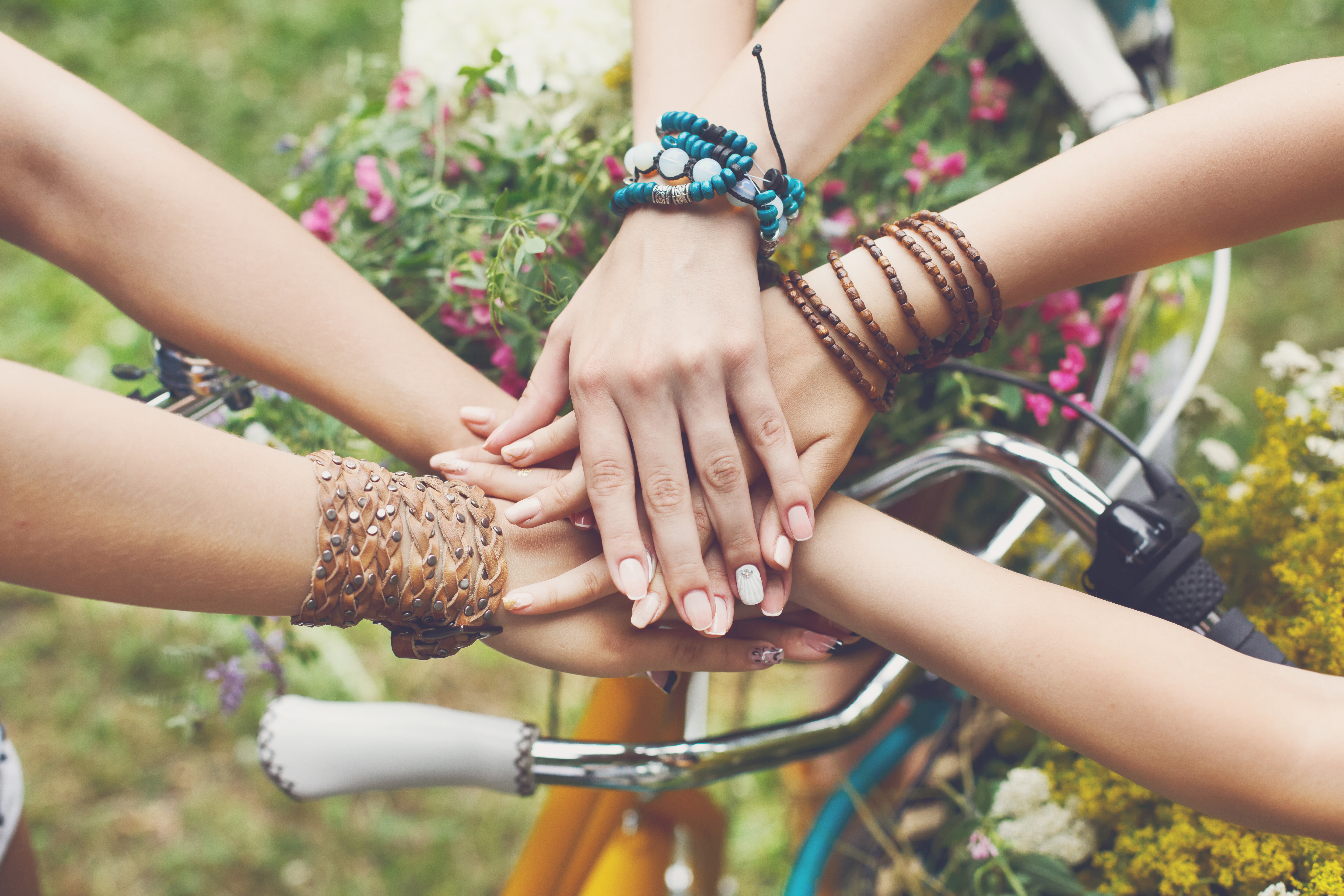 A few weeks ago I was at this party with a smexy-as-hell photographer. He was all snap snap snapping away, weaving throughout the partygoers, looking real fine. We ~made eyes~ a few times, just a quick glance here or there, totally casual. You know when you lock eyes with someone through a crowd of sweaty bodies and pulsing music and feel like the only person in the room? Yeah, it was basically this:

Then in the middle of the party, my friend turns to me and goes, “I’m into the hawt photographer. We’ve been making eyes all night.”

I mean, let’s be real (if we must). The I-don’t-know-his-name-but-he-was-hot-okay photographer was probably not my soulmate. And since approaching someone out of the blue is my literal worst nightmare, nothing was going to come out of my party flirtation. But it felt a little… disheartening to realize my epic eye-flirt had actually been happening to my friend too (and basically all the ladies in the room, upon further inspection. Really hot photog, is that how you want to play this?). And it bothered me the rest of the night. I felt like a bad feminist for letting a little frisson of something get to me — a very ungenerous can’t you just let me have this one? Even though… I never told her I was even hot-for-the-photographers-bod, so how was she to know? And should my little flirt sesh preclude her from actually approaching said photographer if I wasn’t going to myself?

This kind of subtle tension, competition, or just (for lack of a better phrase) awk-as-hell subtext makes its way into a lot of friend-relationship-drama. And there are all these unspoken “rules” that everyone feels slightly different about — so how do you know when you’re stepping on a friend’s toes or inadvertently hurting someone’s feelings? Or just getting a little too worked up about your photographer crush at a throwaway party?

Let’s parse this out with some specific oh-god-what-do-I-do scenarios.

You “matched” with the same person

You know how Bumble (and basically all dating apps, right?) works based on your location? This can really backfire when you’re all a-swiping next to each other… because you’re probably getting some of the same “matches” as your friends. Hopefully, this is easily defused based on chats with said person — i.e., you discover he or she is really into the outdoors and you’re all “ugh, why, bugs” and your friend is all “YAY HIKING.” Problem solved.

But… what if the chat is going really well for both of you? Now we’re entering the land of awkward. If you’ve discovered you’re both interested in pursuing something with this person, I say it’s time to analyze your interest versus your tolerance for awkward versus the strength of your friendship. Consider all possible outcomes. What if you both pursue it and this person — let’s call them “Sam” — ends up not liking you, but liking your friend a whole lot? And four months down the road, Sam is a regular brunch addition and brushing his/her teeth in your bathroom sink every morning. Are you going to be chill with that? Or is that going to drive you out of your mind?

If Sam is just another swipe for you, I’d say maybe take a pass on the whole situation. BUT, if Sam is lighting up every button you have… don’t miss out on the opportunity for an awesome date/S.O./partner because of a swiping happenstance. Chances are, you’re making a bigger deal out of it in your head than your friend will make in real life.

You’re having a thing for your friend’s ex

This is not a good sitch to be in because dealing with a friend’s ex is just messy. There’s no way to spin that. A little hands-off crush is nbd, sort of like that crush you have on Jon Snow (#perfectbutt), because it’s something that will literally never happen — it’s just fantasy. But when that fantasy starts creeping toward reality, people can get hurt.

If this guy or girl is truly the end-all be-all — and you feel you’re passing something real up if you don’t go there, then you’re going to have to do the math and weigh how important your relationship with your friend is against how much you’d like to pursue this romance. And I’ll just leave this here: Ovaries before Brovaries.

Introducing your S.O. to your friends is always a ~challenge~. They’re nervous, you’re nervous, and suddenly your friends are looking like those hyenas in The Lion King, ready to tear somebody apart (out of love, of course). But sometimes, MAGICALLY, everyone gets along or everybody is just already friends and then life is perfect — you get to hang with your S.O. and your friends and nobody feels neglected and you are basically queen of the world, bow down.

You know where I’m going with this right? The spectacular backfire, when your friend has a tearful breakup and all those sunshine-happy-times fly right out the window. Obviously, you’re not going to break up with your S.O. just because your friend did (though that would be a stunning, if misplaced, feat of camaraderie). So now you’re stuck in limbo, still connected with your friend’s ex — and potentially put in a situation where you might be hanging with him or her on the semi-reg — and also wanting to support your friend.

In general, I think it’s best to just not make a big deal out of this. Gauge your friend’s temperature on the situation (i.e., will she be upset if you know you’ll see her ex and don’t tell her beforehand?) and then just let the situation work itself out. There’s no need to give your friend an “I saw him/her!” alert every time — let them heal on their own without the constant reminder. Also, be careful not to fall into the trap of reporting on every interaction like, “So, how did he/she seem?! Were they super sad?!” If your friend asks, say something vague like “I didn’t really see them that much” and move on. You don’t need to get involved in that #drama.

Your friend’s significant other is acting… weird around you

What’s particularly insidious about this is when it’s kind-of-sort-of not clear. It’s just giving you a generally creepy vibe. It’s almost easier (for you, unfortunately, not for your friend) if they just come right out and make a pass. Then it’s all black-and-white and out in the open. But if it’s little comments or messages here or there — it enters the territory of “how do I adequately explain this?”

I am by no means an expert on this — but I did have a friend’s S.O. show up at my place of work (it was a retail job) unexpectedly and just generally act awkwardly to the point where I felt uncomfortable and my coworkers were giving me the side-eye. Basically, everyone was feeling the vibes. I didn’t know what to do at the time because it all happened so quickly and after it was over it was so easy to explain away in my head. But I just kept thinking about it and feeling weird. To the point where I felt like I was hiding something from my friend and decided to just casually bring it up in conversation. And y’all, it was awkward. There was confusion and hurt feelings. But when the relationship ended a few months later, our friendship was still strong, because there wasn’t something hanging between us.

In these scenarios, I think it’s best to use your judgment and trust your gut implicitly. If something is making you uncomfortable, know you have the license to speak up: to both your friend and their S.O. If you’re feeling awkwardly about sitting down with your friend and making it a formal “talk,” try bringing it up semi-casually in conversation (i.e. “Bryan messaged me last night out of the blue. I wasn’t sure what to do, so I just ignored him. Is everything okay with you guys?”). Just use your discretion about when and where — and keep it between you and your friend.

My general rule of thumb? Speak your feelings (even when it’s painful). Everyone is different and everyone can have a different reaction to a scenario — one you’re not necessarily expecting. It can really help to just be honest when you’re feeling awkward enough about something that it’s not easy to brush off in your mind and is creating tension in your friendship. Remember, your friends care about you and you care about them. S.O. and relationship dynamics don’t have to come between that bond.

Do you follow a modern-day “girl code”? Tell us about your experience in the comments below!