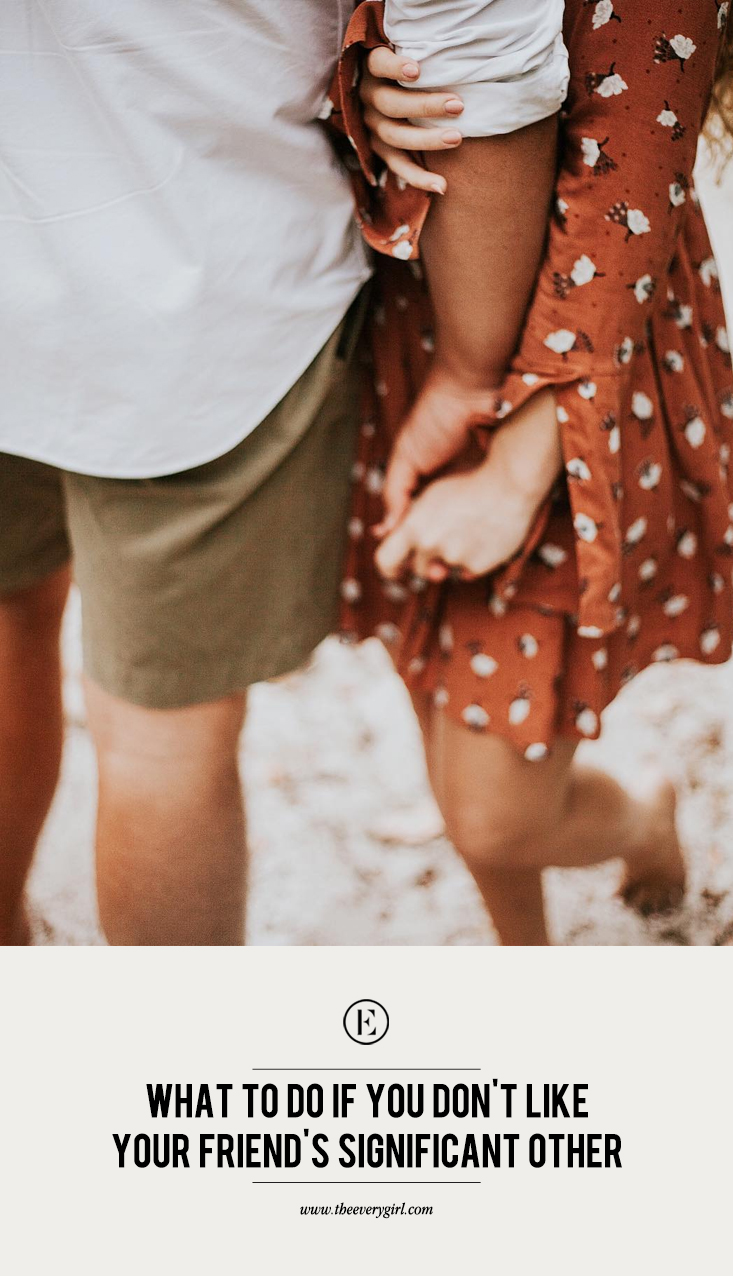 There’s nothing worse than meeting your amazing friend’s new significant other and realizing you… do NOT like him or her. But there’s a big difference between thinking Hmmm, definitely not good enough for my BFF versus having a legit reason to dislike the person, so before you panic, consider these.

1. Be honest with yourself.

Ok, so you think your friend’s beloved is a total douche, but check yourself—is this truly about them? Or is about you?

Even if it’s hard to admit, it may be a small case of jealousy in the sense that their relationship is taking up space that used to be reserved for you two alone. Maybe Thursday night drinks were always your thing, and now it’s their evening to Netflix and chill together, and you’re feeling a little left out.

If so, that’s fine. Admit it, then redirect your icky feelings to focus on what’s actually bugging you, which is the desire to remain a priority to your friend. Reach out to him or her, say you love seeing them happy, but you hope to hang onto some 1:1 time to stay connected because they are important to you.

2. Give grace after a first impression.

Yes, first impressions can be a source of truth, but they also might be flat-out wrong. Case in point: I’m often super shy and quiet when meeting people for the first time, because I get nervous and wanna say the right thing. (Introverts, you feel me?) I’m completely aware that someone might view me as stuck-up because of this, which isn’t accurate or fair. So in turn, I try to remember that not all first impressions are fair.

That goes for your friend’s boyfriend or girlfriend, too. Sometimes people act weird when they’re feeling insecure as the new person within a group dynamic: they tell dumb jokes, they come on too strong to make a good impression, they sit there silently with a drink in hand not cracking a smile once. But for your friend’s sake, give this guy or girl some grace at the start. Reinforce your efforts to make him or her feel welcome, and try to see the good.

One of my best friends dated a guy for five years who always argued with her about splitting the bill. Was it annoying to listen to? Um, yes. Did I think he was an asshole who relied on her too much financially? Yup. Did I ever say anything to her? No, because in the grand scheme of things, his cheapskate tendencies were not a make-or-break issue.

As the protector of your friend’s heart, here are other things you can annoyed with, roll your eyes at, or have an opinion on:

HOWEVER: if your friend is happy, and the relationship is relatively healthy, let that shit go. It is likely you’re going to have an opinion about most of the people your friends date, hook up with or marry. Not all of those opinions will be good, and with time, some will even turn out to be right. But along the way, recognize what’s superficial, what’s petty, and what’s simply running counter to what you think your friend should want in a person—and then remember it’s their relationship, not yours.

On the other hand, there is a time and a place for speaking up about your friend’s partner, and sometimes you absolutely need to say something.

Warning Signs of an Unhealthy Relationship

If any of these are present, talk to your friend immediately. You may be tempted to go all therapist on your friend (and I’m not saying that’s necessarily wrong), but be mindful of how you proceed to avoid alienating your friend and putting her/him on the defense. Bring up the issue once, and frame it in the sense of an observation or based on what you’ve been told, and see how it goes.

Examples of What to Say

Then see how the conversation plays out. Even if the problem is SO clear to you, your friend has to handle the relationship on his/her own timeline, so don’t overdo it with a laundry list of all the reasons why they need to break up. Offer support to your friend and encourage him/her to make a change. Also, chances are high he/she may shut down, so try to be respectful while emphasizing that you want the best for them. And stay patient, as he/she may take forever to see the light, so to speak, if at all.

5. Give advice when he/she asks.

Raise your hand if unsolicited advice instantly pisses you off. Me too, most of the time. Even if it’s fantastic advice, part of me doesn’t like feeling pushed around, especially over a touchy subject. The same goes for your friend. Wait until he/she asks what you think of their new love, or a specific situation in their relationship, before offering up your thoughts. Think about how you would feel if your roles were reversed, and resist the temptation to dive right into an “Omg, he/she is the worst, I don’t even know what you see in him/her.” Instead, express your concerns, back it up with evidence of things he/she has already told you (in that moment or another time), and position it as wanting your friend to be happy and whole.

Another option is to ask your friend what he/she wants from you before you answer with your advice. Sometimes people literally just want to vent, and sometimes they want help determining solutions. Ask, “What do you want to do, here?” and then help him/her sort of thoughts on the problems and a way to move forward.

And if you seriously, seriously hate your friend’s significant other, and it’s too hard to hold your tongue, decline. Say you’re not comfortable talking about him/her, and don’t think you’re the best person to be a good listener. Suggest that she talk to another friend or family member, or even a counselor or life coach, who can take a non-biased approach. (But don’t be a jerk by going to a mutual friend after that to air out your frustration; that never ends well.)

6. Be honest about how you feel.

Yes, really. Don'[t lie; your friend will know. If they say, “So, what do you think of him/her?” Don’t jump in with an eager, fake-nice “He/she is great!” Tell the truth in a kind way or default to a general position of: “Well, I don’t know him/her too well yet, but I totally support you in any healthy relationship that makes you happy.” Or, “I’m not sure if you guys are right for each other, since you normally go for his/her opposite, but you’re clearly in love, so fill me in!” Or cut the chase as my friend Cassie does with a: “Girl, I love you but let me be 100% honest with you for a quick minute…”

Remember, at the end of the day, it is their relationship. No matter how much you love your friend, your job is not to “fix” whatever is going on.

Of course, if you honestly share how you feel, your friend might be defensive or get mad upon hearing what you have to say, but that’s where you can gently remind him/her that you love them, you want the best for them, and you are here whenever they need you. Also, know that your friend is probably not going to switch gears in her love life just because of you, and hell, they may not do anything about it at all. Detach yourself from the results, as your goal isn’t necessarily to “get them to break up,” but to encourage him/her to be in a partnership that brings out their best. Your goal also isn’t to force him/her into a position of choosing between the two of you.

Remember, at the end of the day, it is their relationship. No matter how much you love your friend, your job is not to “fix” whatever is going on. (Again: all of this is assuming the issues at stake are not major warning signs of abuse of any form.)

7. Decide how important the friendship is to you.

Throughout high school and college, I had two best friends from home. We were thick as thieves, until one started dating the other’s long-term ex-boyfriend. I remember talking to her about it, and she basically said, “I don’t care, I like him,” and as a result, our friendship slowly dissolved. I realized I didn’t care to be friends with someone who would make that choice, and she wanted to brazenly follow her own heart without consequence (even though they broke up shortly after like I KNEW THEY WOULD. Ok I’ll stop.) It turns out our friendship wasn’t made to last.

Look, people and circumstances change—and not always for the better. If your friend insists on hanging out with assholes but complains about it all the time without changing anything, maybe you see to see or talk to him/her less. Distance can help you remain friends in a way that doesn’t make you want to scream. Or, perhaps, you’ve tried to talk to your friend about concerns, and your friend shared that with the significant other in question, and now he/she is pulling away because of bad blood across the board.

You know it’s time to distance yourself when you’re willing to lose the friendship. Even if it makes you very, very sad. Because it is sad, but sometimes necessary.

8. Control what you can, and then move on.

Even if your friend’s relationship is keeping you up at night, it doesn’t involve you in the long run. I know, harsh. But people are going to make mistakes, and experiences in love often teach us the most useful (if painful) lessons. Your friend is bound to fall for someone who doesn’t meet your standards or fit the mold of what you anticipated she/he would like.

Additionally, you’re not obligated to maintain a relationship with the significant other at hand. After all, you’re not dating him/her. But you can certainly be pleasant, polite and mature when you’re around him/her—and then focus on being a good listener, keeping the doors of communication open and providing loving guidance and support to your friend.

What do you do when you don’t like your friend’s significant other? How did the situation play out?