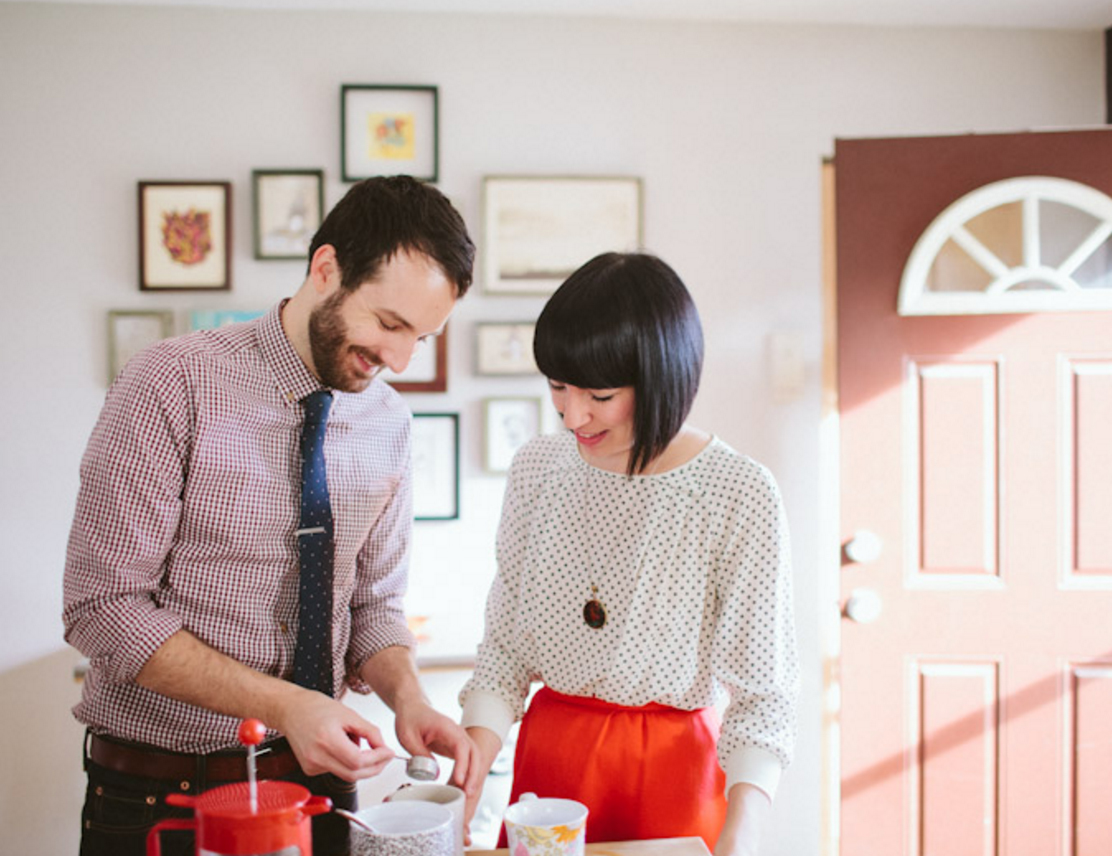 Evan and I are newlyweds. We got married in October so if this were middle school, we would have just celebrated our “five month anniversary.” I still accidentally call him my boyfriend from time to time and he pretends to get all offended. I apologize explaining that I must have confused him with my other boyfriend. We have no idea what we’re doing.

While planning our wedding, we got a lot of unsolicited advice—some good, some bad, and some truly questionable. We heard a lot of clichés like, “Don’t go to bed angry” or “Happy wife, happy life!” but the one that kept popping up most was, “The first year of marriage is the hardest.” The funny thing is how people say it—usually older couples, they almost always chuckle to themselves in a way that somehow feels simultaneously nostalgic and ominous—like the creepy gas station attendant in a horror movie who warns the sexy teens not to go down “that road there.” So like a couple of naive, undeterred teens, Ev and I ignored the veiled warnings and instead decided to document our first year with a very public podcast. Is it really as hard as everyone says? We’re on the road to find out.

We started our podcast, The Paper Year, on New Year’s Eve so, again, if this were middle school, we would have just celebrated our “two month podcast anniversary.” Each week, we sit down at our kitchen table to talk about the state of our union. As marriage novices, we also interview other married couples to get their veteran take on the institution: everything from advice for surviving the first year to their Netflix practices as a couple. While we’re far from relationship experts, we’ve learned A LOT over the course of our first 10 episodes. Here’s what our first year of marriage and podcast have taught us so far:

Somebody has to drive the bus.

This is an expression in our house that means “somebody has to be in charge.” That doesn’t mean one person is in charge all the time but in order for any big life things to get done, one person usually has to step up and take over. For example, while The Paper Year was originally my brainchild, Evan was the one who took the ball and ran with it: setting up the website, scheduling our first guests, and ordering the equipment (oh man, he was SO excited for Cyber Monday). I’m very grateful he’s so good at driving the bus.

Evan and I were never big fighters before we got married. I can count on one hand the number of times we raised our voices at each other while dating and frankly, most of those incidents were about getting engaged (one of us *ahem* wasn’t quite ready… for a WHILE). But when we first got back from the wedding, we got into a couple tiffs that had me worrying that the honeymoon phase really was over. The strangest part was that fighting somehow felt more serious and more silly all at the same time.

I kept thinking, “Am I really going to be mad about this FOR THE REST OF MY LIFE?” Egos were bruised, dumb things were said, but we quickly realized that the only way to get over a fight is with good ol’ fashioned communication. And that honestly has been my favorite part of doing the podcast together—it’s the perfect excuse to formally check in with each other once a week and talk. It. OUT. Because there’s nowhere to hide once you cozy up to those mics.

And speaking of communication, here’s a little tip: Late night Ben & Jerry’s is the best way to get your angry wife to stop giving you the silent treatment.

Some things are sacred.

The biggest compliment Ev and I have received about the podcast is people saying they feel like they’re hanging out in the kitchen with us when they listen. This means the world because more than anything, we wanted our podcast to feel honest and authentic to who we are: A couple of weirdos in love who like to talk about serious things from time to time.

With that said, before our first episode, we did set some ground rules about things we just weren’t comfortable sharing. We joke that we have “safe words” for off-limit topics but we really do make it a point to preserve some level of privacy with our relationship. We never want the podcast to turn into some reality show scenario where we’re just airing our dirty laundry every week for the world to see. I’ve made an effort to extend this line of thinking into other areas of my life as well: Whether over-sharing on social media or gossiping with girlfriends, it’s important to respect that certain things should stay between you and your partner—because intimacy is a hard thing to earn and a very easy thing to lose.

Everyone is weird and wonderful.

Now that I’ve just finished telling you that some things are sacred, here are two totally bizarre things about Evan and me we’ve learned from doing the podcast: Evan cuts his fingernails in the shower (he’s a martian) and I’ve been known to celebrate a little holiday called “No Shower Saturday” (sometimes followed by Sunday).

There’s a new kind of romance in being married—where being together, no matter what you’re doing, is all that matters.

Choosing to spend your life with another human being is the quickest way to realize we all have our crazy quirks and dirty little secrets. But real love is loving someone DESPITE their tendency to regularly fall asleep fully clothed on top of the bed (it happens!). It’s a privilege to get to know each other’s true selves… no matter how weird we all really are.

Hangovers can be romantic.

Ev and I attempted to record our pilot episode the day after my company holiday party… yeah. Needless to say, that episode never saw the light of day (it ended abruptly with me demanding we order chicken fingers and honey mustard). After promptly deleting the recording, we spent an incredibly lazy Sunday on the couch with nothing to do but watch Brooklyn 99. And you know what? It was the absolute best.

Recording this podcast has been a lot of things so far: hysterical, embarrassing, invigorating, uncomfortable, eye-opening, inspiring, and touching (to name a few). But the one thing I didn’t expect it to be was romantic. Sure, it’s not the “Prince and candlelight” sort of romantic, but it’s a new married kind of romance—where being together, no matter what you’re doing, is all that matters.

Oh, and in case you’re wondering why “The Paper Year” for our title, the first anniversary of marriage is traditionally celebrated with paper. I’m hoping for cash.