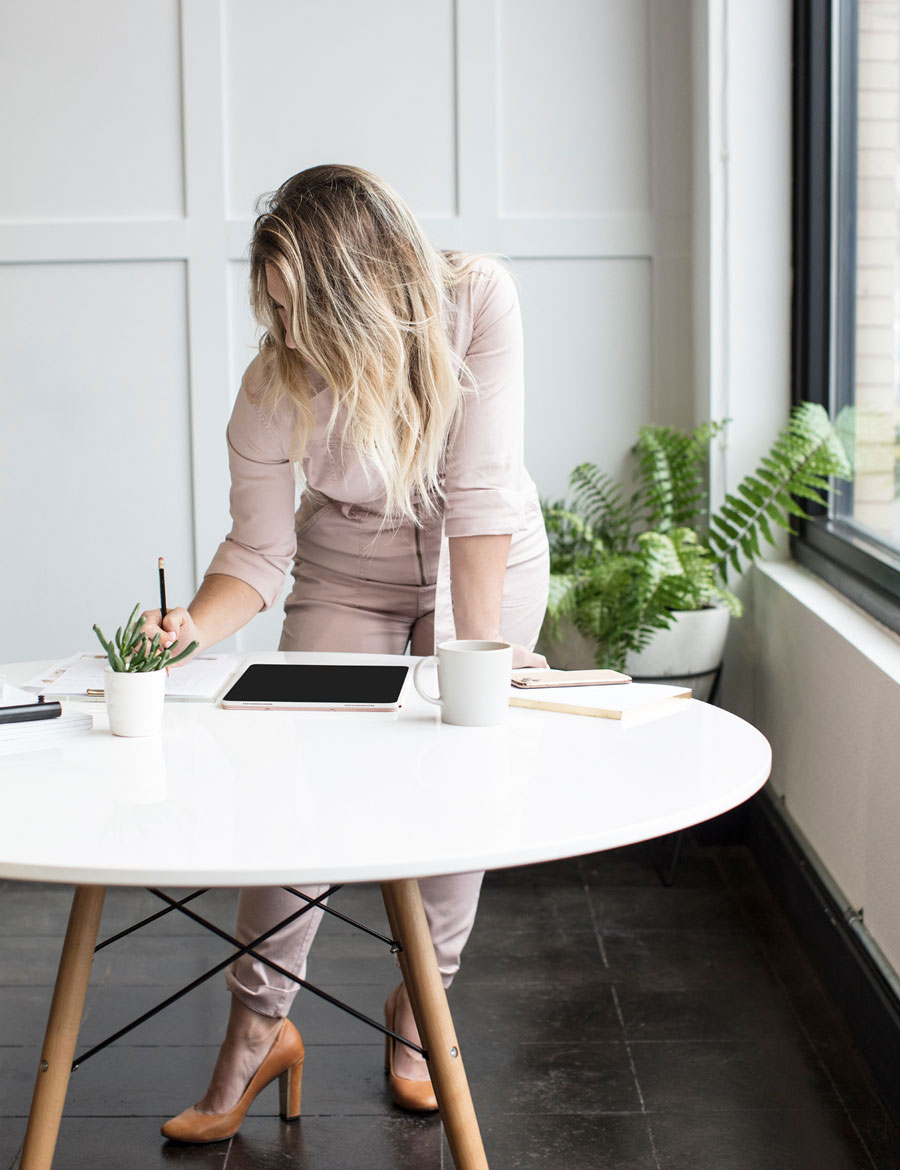 One year ago, you would have found me sitting at the boardroom table of a prominent financial services company, ready to deliver my Q2 report. I was 30 years old, the youngest member of the firm’s management team, and at the table of a 46th-floor board room with enormous windows and the most breathtaking view of Chicago. I was polished, engaging, and articulate as I provided feedback that mattered to a table of mostly men. I had a secure position, five direct reports, and a work family that loved me. But inside, the feeling that I was settling was undeniable. I knew my purpose lay outside of that firm, but little did I know it would take a global pandemic and an unexpected lay off to help me acknowledge and step into it. Here are the unexpected things that happened next:

I let go of stability

I was working for this company for almost nine years. Nine years! That may as well be a century in millennial years. I had been promoted three times, had a stellar income, and earned respect in this male-dominated industry. I had felt passion and purpose for many years and rarely dreaded going into the office. But as I turned 31, the feeling of being stuck seemed to attach itself to me. “On paper,” I had everything I had wanted up until that point, but what I desired next was to lead more than just my team. My company voiced on occasion that they intended to move me into a more senior leadership role, but I had entirely outgrown my current position, and their timeline was ambiguous. After attempting to accelerate their nonexistent timeline, it was evident that I was trying too hard to make something happen. It was then that I accepted that I had hit the ceiling of my career growth at that firm. I wasn’t sure what I was meant to do next, but remaining in this role was not helping me, as difficult as it was to part ways.

So I took a leap of faith, and I accepted the opportunity to work as a Senior Recruiter for a well-known tech startup. I was determined to climb in a new industry, unsure of what impact I was going to have, but confident I would have one. I left my role on March 6, with the first day of my new job beginning March 13. In that duration, we went from COVID-19 being a distant thought to the company issuing a mandatory work-from-home order on my first day. And three weeks later, they didn’t need me anymore.

There I was, signing into my team’s morning Zoom huddle only to find my boss and the company’s Chief of Staff. I was momentarily startled but understood immediately what was taking place. They promptly informed me that the company was reducing its workforce, that my position was not exempt from it, and that tomorrow was my last day. They offered a small severance package consisting of paying me out for an additional month and covering my first month of COBRA. I processed it all as they spoke, and I am proud to say that I really held myself together during the meeting. I didn’t cry. I didn’t spit accusatory questions at my boss. I didn’t hastily or vengefully email other people at the company to let them know to watch out for their jobs, too. So what did I do? I listened to my boss, thanked her for hiring me, and expressed my regret that I didn’t have an opportunity to work for her for longer.

There I was, signing into my team’s morning Zoom huddle only to find my boss and the company’s Chief of Staff.

After I “left the meeting,” I took a few deep breaths, panicked slightly, and called my parents, my boyfriend, and my best friend, and then eventually put in a call to my financial advisor. I can’t say I didn’t cry afterward, because I definitely did. But I didn’t spend a lot of time crying.

Why didn’t I? Because ego aside, losing my job was not that surprising. In six days, I went from hosting a lighthearted Soul Cycle goodbye party to racing to Target and hoarding toilet paper. My new company went from hiring for 30 positions to hiring for only six. This pandemic radically changed our world, and I was watching it happen. And admittedly, in the short time I was in that new role, it was apparent that the career move hadn’t filled the emptiness that I had hoped. Granted, I was a new employee who was learning their role remotely. But the job was more technical than I had anticipated, and the lack of leadership I held gave me an even greater sense of being underutilized. It was starting to feel undeniable that I was once again meant for something more.

I accepted the present moment

Acceptance can be pretty life-changing when it’s embraced. I first learned about it a few years ago when my cousin had recommended the book The Power of Now, by author and spiritual advisor Eckhart Tolle. In his book, he inspires us to accept what we cannot change. He enlightens us by sharing that once you accept the now, you allow life to begin to work for you and not against you. So, accepting the now is exactly what I did.

I let myself have one day of “mourning” and told myself that the next day I was committed to being in solution-mode. There was nothing I could do, so why spend a lot of time moping? And sure enough, the next day, I got to work. I accepted it was going to be challenging to find my next opportunity during a pandemic, so I began to get an idea of how much time I had to find that next thing. To ease financial anxiety, I put my finances down on paper. I recognized that with both unemployment and my emergency savings, I had enough to stay afloat, without worry or touching other financial accounts, for at least six months. And then I decided to channel this traumatic life experience and abundance of time into something that gave me life, positive energy, and an opportunity to help others.

Acceptance can be pretty life-changing when it’s embraced.

I recognized that my years of fulfillment didn’t necessarily come from ladder-climbing; it came from being a leader and positive inspiration to others. In my corporate role, I was in a position of influence to my team, our college program, and the many recruiters who often looked to me for guidance. This influence ignited a passion for growing others in their mindset, habits, and potential, and helping them become the best versions of themselves. The only thing missing was doing it at a much higher level. After losing my job, I decided that I would no longer hide this passion and acknowledged that to fully embrace it, I had to put myself out there.

The day after I was let go, I bought my website domain, secured my Instagram handle, and began creating content. I started blogging and Instagramming, pulling my inspiration from life experience, self-help books I’ve read throughout the years, and my passion for wellness. It all was pretty spontaneous. I didn’t have a business plan in mind. I didn’t know what form this was going to take on. All I knew was that getting started would lead me there, and it was the best thing I could do to fill my time and learn new skills while job-hunting during a pandemic.

I recognized that my years of fulfillment didn’t necessarily come from ladder-climbing; it came from being a leader and positive inspiration to others.

I stepped into my purpose

In the subsequent months, I had numerous colleagues and friends making networking introductions and offering to help me find my next opportunity. Meanwhile, I grew more in love with the self-help content I was providing and the encouraging and validating messages I was receiving in return. I thought, “If these simple messages are impacting lives, how can I show up even stronger? And how can I begin to monetize this?” And it was at that point that I seriously considered coaching and entrepreneurship as a career path.

It seemed as though for every job opportunity presented, I had three “signs” that I needed to start my own coaching business. The final sign occurred as I was listening to Jennifer Allwood’s episode on Amy Porterfield’s podcast. The moment she said, “you just need 20 seconds of insane courage to do what you’re afraid to do,” I decided at that moment to enroll in a six-month coaching certification course. The podcast was actually still rolling as I typed in my credit card information for a $3,500 class! One month later, on July 1, I officially established an LLC.

The past two months have been simultaneously invigorating and exhausting. I have never worked harder between completing my coaching class homework, building my coaching business, writing for my blog, creating Instagram content, and now dabbling in YouTube. Still, I experience a state of flow most of the time, given that I am so incredibly passionate about it all. But there is a lot that doesn’t come as naturally: I’m still struggling to create an ideal schedule, I’m not experienced in bookkeeping (who knew I needed to hire an accountant?), and I’ve spent so much time just building general content that now it’s time to focus on making it revenue-generating. But unlike my previous roles, I now have a limitless opportunity to lead, and I know that if I just keep doing more, it will eventually take off. I constantly remind my clients, friends, and the Instagram community that anyone can do anything they put their minds to, and I am determined to be an example of practicing what I preach.

If you had told my 30-year-old self that at 31 I would be unemployed but starting my own business, I probably would have let out the biggest sigh of relief to hear that I finally put my mind to living out my own potential. 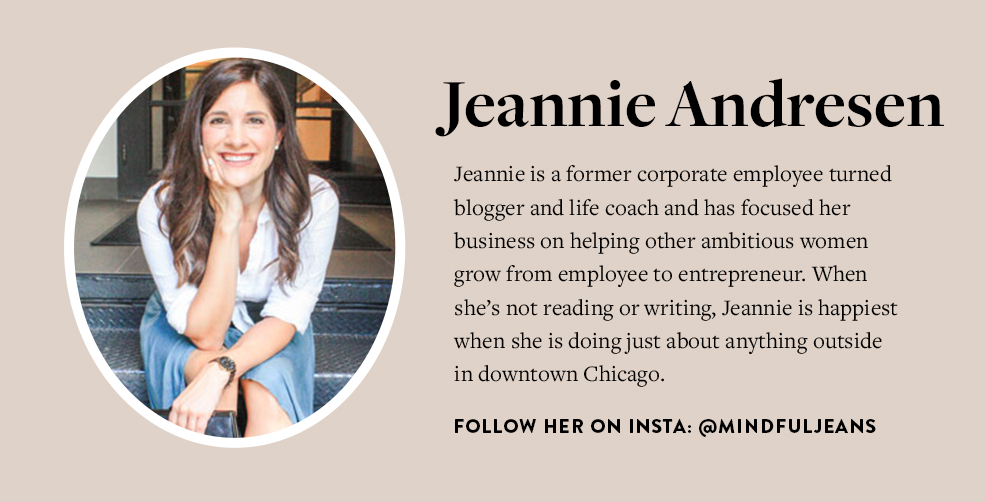