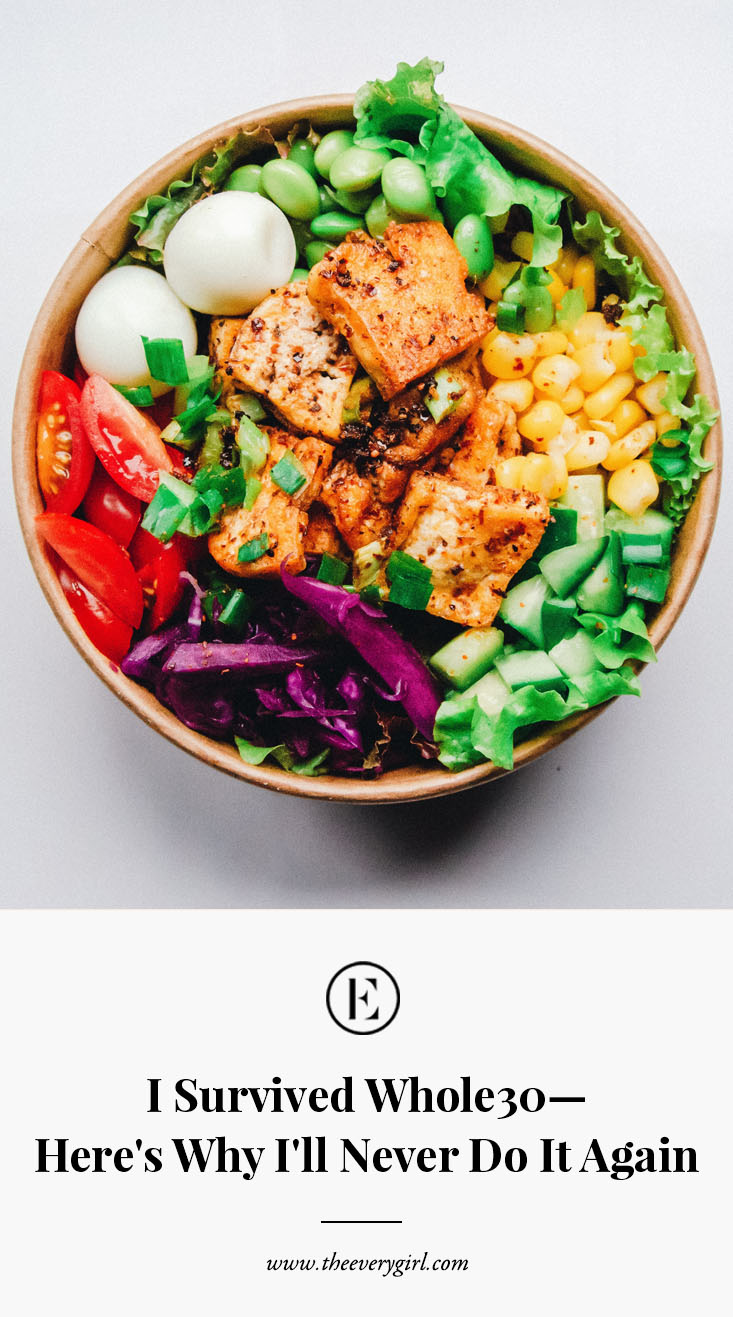 Running a marathon, being able to do real pull-ups—some goals just sound better on paper than they do in reality. And for me, Whole30 was always on that list, both full of ambition and empty promises.

It was an idea that I threw around about once every six weeks—“Maybe I’ll do it next month.” “I have no big plans in April, that would be the perfect time to do it.”—but never actually got close to doing it.

If you’re not new around here, by now you’ve heard that my stomach is the bane of my existence. Long story short, my stomach has caused me problems for my entire adult life; I’m sensitive to a lot of obvious things, but some not-so-obvious ones that were harder to put my finger on as well. My doctor had recommended an elimination diet for me countless times, but there never felt like there was a great time to do it—until a bad few days forced me to realize I needed to make a change.

As Whole30 coincided with what my doctor told me to eliminate, I decided to follow Whole30’s rules exactly. While my main goal was to figure out what foods I’m sensitive to, I also had some other goals in mind: cutting my sugar consumption down, being more mindful about my eating as a whole, and cooking more meals myself.

My experience was a journey, and with the entire 30 days now behind me, I have some thoughts—one of them being that I’ll never do it again. Here’s why:

When I say that I don’t want to do Whole30 again, I definitely don’t mean that I regret doing it once. I’m a week out of my 30th day right now, and the habits I developed during the process have stuck more than I could have imagined.

My eating is much more conscious, and healthy eating doesn’t feel like a chore—it just feels like a habit. I don’t need to try to resist the office Cheetos consciously, I just truly don’t crave them like I used to.

That being said, I believe that the things I learned about my eating habits over the past month are going to stick with me in the long-term, and that’s something I was in this experience for. I don’t believe I’ll ever need to do it again to re-learn the lessons; they’re here to stay.

I didn’t feel amazing during the process

In the Whole30 book, they explain that around day 14, you should basically feel the best you’ve ever felt—and for whatever reason, that didn’t happen to me.

The beginning was very tough, and that went away after about 12 days, but I never got the magic, I-feel-better-than-I’ve-ever-felt feeling that was promised. This coupled with the fact that I feel like I learned what I needed to makes me weary to ever go through the process again. I feel that if I get off-track, I’ll be able to get back on with the lessons I learned during my one experience and that doing it again would be counterintuitive to my goals.

A post shared by The Official Whole30 Program (@whole30)

On the day to day during Whole30, I felt completely full. But on days that I worked out particularly hard, it often felt impossible to feel like I was getting enough calories in.

One of the rules of Whole30 is that you shouldn’t track calories, which is great since it isn’t a diet; but it was hard when you’re on the opposite side of the spectrum where you’re trying to get enough calories in. When I was doing workouts that burned 600+ calories, I felt like no amount of eggs and meat and veggies could possibly fill me up. (Can anyone eat that much chicken in a day? I think not).

In retrospect, I think this might have been why I never felt amazing during my process. I kept up with my typical workout routine, which involves a lot of HIIT and running, and wish I tracked calories for the sake of making sure I made up for what I lost during my daily workouts.

A post shared by The Official Whole30 Program (@whole30)

It affected my life in more ways than one

When you aren’t drinking, it obviously affects your social life, but this wasn’t the thing that affected me the most in terms of going out.

One of the most prominent days was one where my coworkers went to an after-work happy hour for drinks and appetizers. I usually ate dinner right after work, so I was hungry by the time we left, and the restaurant we went to had literally nothing I could alter to fit Whole30’s guidelines. I wanted to be out having fun with my coworkers and friends, but I was so hungry that I ended up needing to head out early.

Not drinking didn’t bother me as much as I thought it would; despite a few parties that I wished I wasn’t on Whole30 for, it didn’t affect me much. What did affect me was the ability to get dinner with my friend who was in town and not being able to grab something for lunch on days that I ran out the door and forgot my meal-prepped food in the morning.

Whole30 is centered on the concept that food is fuel, and that’s something I always wanted to be fully, whole-heartedly on board with; but the truth is that food isn’t just fuel. It’s getting your friend’s favorite pizza to celebrate her getting a promotion, going out on a Friday night when your sister is in town, and going to happy hour to celebrate a company-wide success with your coworkers. After my experience, I have a better grasp on what foods make me feel good, and because of that, will avoid the ones that don’t more intentionally. But I don’t want life to pass me by when I’m sitting and Googling the ingredient list of the dressing that’s going on a salad that I already had to alter at a restaurant—even if it’s just for another 30 days.

My experience is one that I’m extremely grateful that I did. It gave me full control over what I was putting in my body and showed me that I don’t need a bite of chocolate after dinner and that I’ll survive without a glass of wine at the end of a particularly hard day. It helped me start 2020 in the absolute healthiest way possible, but for me, once was enough. I will always be proud that it’s something I checked off of my to-be-done-eventually list, but I don’t see it getting back on it anytime soon.