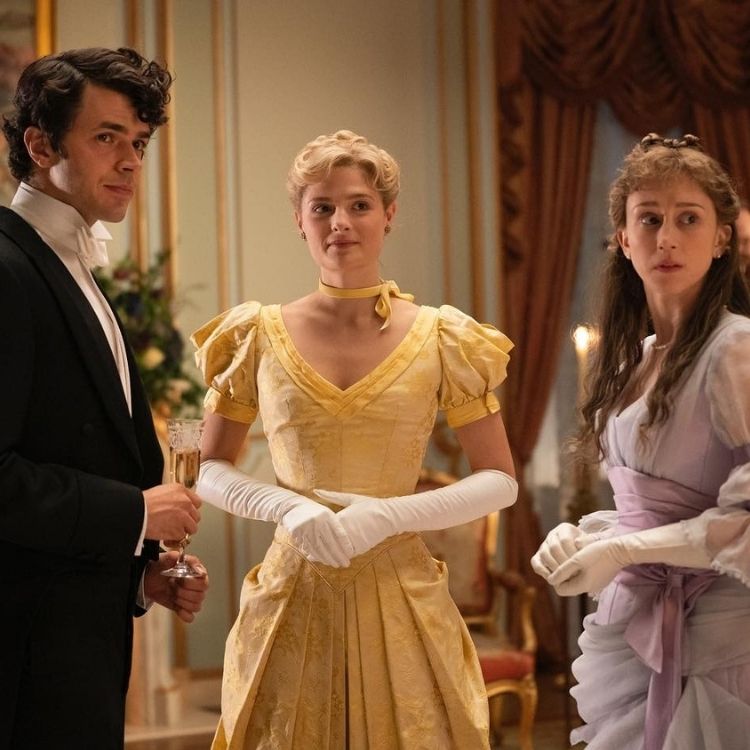 To this day, one of my crowning achievements is getting my S.O. to fall in love with Downton Abbey. When the trailer for the movie came on at the theater (prior to him completely catching up on the series), he covered his ears and ran to the lobby, in fear the trailer would somehow spoil the show for him. He was right; it would have been quite the shock seeing (spoiler alert) Mary and Henry Talbot together in the trailer when he was still blissfully unaware of Matthew’s fate. Downton Abbey is a delightful show with upstairs-downstairs drama and incredibly low-stakes plotlines you can’t help but get wrapped up in (remember the case of Violet’s missing letter opener?). Needless to say, he and I have been chasing the Downton Abbey high for quite some time, and with The Gilded Age now gracing our screens, we may have found it.

From the creator that gave us Downton Abbey, The Gilded Age follows Marian Brook (played by Louisa Jacobson, and if you can’t quite figure out why she looks so familiar to you, it’s because she’s the Meryl Streep’s daughter) as she moves from a no-name town in Pennsylvania to New York City to live with her estranged aunts, Agnes and Ada. While Agnes and Ada are old money and resistant to change, Marian is more open-minded, causing a rift when an up-and-coming, new-money family builds a positively garish palace just across the street (I mean, can you believe the audacity?). Though we’re only one episode in, I can already tell that The Gilded Age has everything I love about Downton Abbey—and I am all in.

Stream The Gilded Age on HBO Max on Mondays at 9 p.m. ET.

Why Downton Abbey Fans Will Love It

Starting with our heroine, Marian Brook is already someone I’m rooting for. She’s loyal, defiant, and wants to make something of herself in a world where women of her class are supposed to sit around and wait for a husband. In just one episode, she proves she doesn’t care about the status quo and could be the bridge between the warring old-money and new-money families.

Marian’s aunts have a dynamic to die for. Cynthia Nixon’s Ada Brook is the slightly more open of the two, and is the reason Marian came to New York in the first place. Agnes, on the other hand, exudes an air of superiority that intimidates me even though I’m safely behind a screen. The two make for a compelling pair of guardians for Marian, whose youthful openness to the changing times doesn’t exactly mesh with their steadfast traditionalism. This conflict immediately comes into play with the introduction of their new neighbors.

Those new neighbors are the Russells, and I can’t tell just yet whether I love them or love to hate them. Either way, they already provide endless entertainment. Bertha, the Russell matriarch, will stop at nothing to be accepted by New York’s elite, despite the fact they want absolutely nothing to do with her. And Larry, her son, is already shaping up to be the lovable heir of the series, a la Downton’s Matthew Crawley.

It wouldn’t be a show after Downton’s heart if it didn’t feature a billion characters we somehow grow to love, loathe, and root for. Though the first episode of The Gilded Age focused on the families upstairs, it’s only a matter of time until we get to know the downstairs cast as well. And if I’m being honest, that’s where some of the best of Downton’s entertainment happened.

A Setting To Get Lost In

If you fell in love with the Abbey, The Russell palace will be right up your alley. It’s a monstrous home built on prime New York real estate with an interior to die for. This is in stark contrast to the Brook’s home across the street, which screams, “we’ve been rich since the Revolution.” While the homes are a marvel in their own right, the backdrop of New York City promises an expansive setting we just didn’t get with Downton—and I, for one, can’t wait to dive in.

It was always hard to place myself in the English countryside, but hearing the characters in The Gilded Age mention streets like Fifth Avenue brings the series down to Earth in a way that’s kind of spectacular for being set so long ago. I may never live in a home as grand as the Russells’ or sit in a parlor like the one at the Brooks’, but the New York outside of their homes doesn’t look too different from the one I’ve seen in person—of course, aside from the horse-drawn carriages and dirt roads. There’s something special about watching a historical drama and being able to shout “I’ve been there!” at the screen.

Plotlines That Pull You In

One of my absolute favorite parts of Downton Abbey was the largely lighthearted, low-stakes nature of some of the plotlines. Don’t get me wrong—they absolutely dealt with more serious issues, but the heart of the show, and what kept me coming back, was the daily drama on the Crawley estate. Violet’s utter confusion with the changing times (remember when she didn’t know what a weekend was?), Sybil daring to wear pants instead of a dress or skirt, and Carson’s shameful history as a stage performer, among so many others. As I’ve said before, The Gilded Age is just beginning, but it’s already showing hints of the silly, endearing plotlines that kept me thoroughly enthralled by Downton Abbey. Without giving too much away, there’s a scene in episode one that came straight out of a rom-com and I’m still giddy thinking about it.

Listen, I get it. There’s a ton of great TV shows begging for your attention. But for one hour on Monday evenings, that attention should absolutely go to The Gilded Age. If you’re someone who could rewatch Downton Abbey‘s six seasons until the end of time—and I’m right there with you—you definitely won’t want to miss The Gilded Age. Just give the first episode a try, and I promise you’ll be back for more. Like I said at the beginning of this article, I am a diehard Downton fan, and I’m all in.

Stream The Gilded Age on HBO Max on Mondays at 9 p.m. ET.