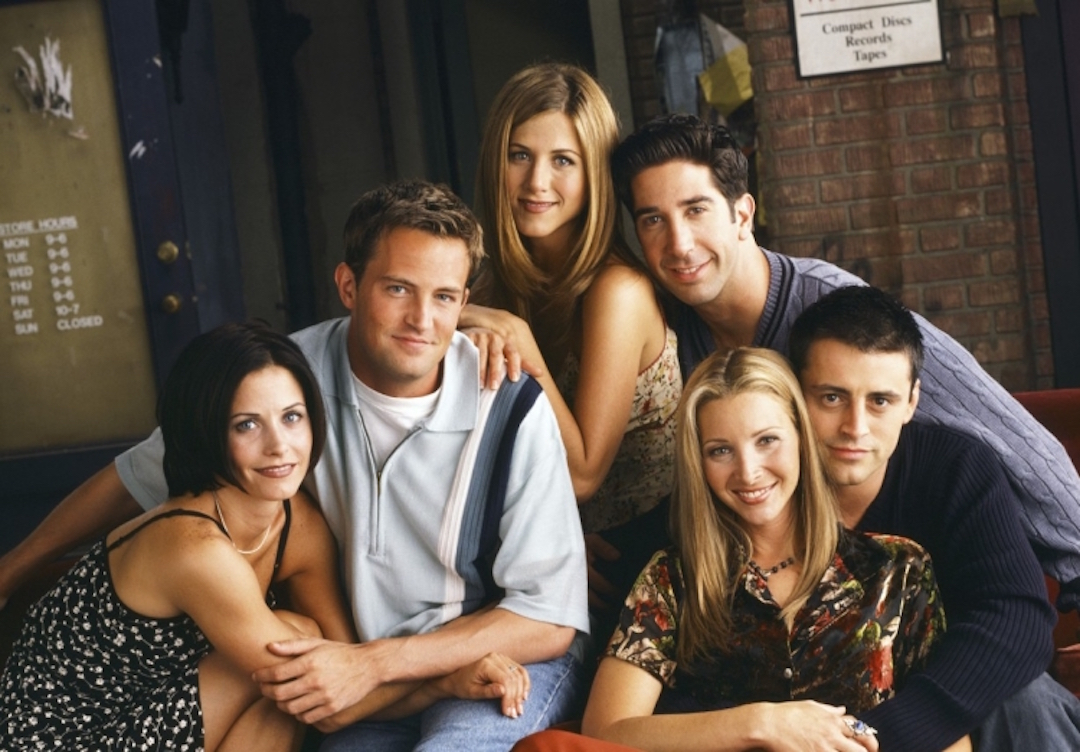 Let’s play two truths and a lie. You know how the game works? I tell you three things about myself, but only two of them are true. You guess which one is the lie.

Okay, here we go. My name is Abigail, I work at The Everygirl, and I hate Friends.

Since you’re an intelligent person and you probably followed the natural order of things and read the headline of this story before you read the actual story, you can probably guess which of those is a lie.

Fine, I’ll admit it: I literally cannot get enough of Friends. I watch it every morning while I’m getting ready, and I have about ten thousand references to whip out at a moment’s notice (Could I BE any more prepared?).

Do I love it because it was groundbreaking slice-of-life comedy in all its 90s glory? Because the characters are lovably flawed yet attainably achievable? Because I’m weirdly yet unashamedly attracted to Chandler Bing? All of the above, yes — but also because it’s genuinely chock-full of life advice (from everyone but Chandler).

But in all seriousness, there’s a lot to learn from this ragtag group of 20-something buds. So pour yourself some Yoohoo, grab a bite or two of Mock-olate, and read on to learn why my passion for Friends can practically be counted as part of my education (because, you know, I’m a little more than a pretty blonde girl with an ass that won’t quit).

Obvious lesson: It’s never too late to grow up.

When we first meet Rachel, she’s a spoiled rich girl who wants to finally make her own money (and decisions). The first episode of the show starts with Rachel leaving her fiance at the altar in order to pursue a happier and more empowering life. Without giving too many spoilers (seriously, just watch it for yourself if you haven’t), I can tell you that Rachel progresses to become a pretty amazing and independent career woman (and single mother).

Hidden Lesson: It’s okay to be a little ~extra~.

Despite the massive strides Rachel made throughout the show, she’s definitely still a littttle boujee — and that’s okay. While Rachel learned that materialism isn’t the key to happiness, she still understands that the occasional splurge (and the perfect outfit) can brighten any day (something I myself can certainly get on board with).

Ross Geller met Rachel Green when they were kids, and he had a crush on her from the time he was 15. Even though they went their separate ways for awhile, Ross’s crush picked up right where it left off when Rachel came back into his life — and he went right back to attempting to woo her. Ross knew he and Rachel were destined to be together (“You’re my lobster!”), so he didn’t let their many fights and arguments get in the way of their exciting potential future. #eyesontheprize

Ross is a college professor and holds a PhD in Paleontology. He is very proud of his intelligence, and he’s in constant pursuit of learning and education. He’s a grammar snob, a science enthusiast, and a total nerd — and gal pal Rachel Green still finds him hot as hell. His interests are TOTALLY different from those of his friends and romantic partners — but it never stops him from forming valuable relationships outside of commonalities. Ross proves that smart is the new sexy (even when your friends are tired of listening to your dinosaur trivia).

Obvious Lesson: Your neuroses can be endearing.

Monica is Type-A to the max, which got her in some trouble with both her friends and her hubby. But for the most part, Monica’s quirky need for control was something people loved about her. She owned who she was and didn’t fight it, which made the people around her get on board with it as well.

When Monica is the best at something, she wants the WORLD. TO. KNOW. After overcoming childhood obesity and finding her passions in life, her confidence became sky-high. She wasn’t afraid of being the best at something, which is something we can all learn from — Monica taught me to own my skills, to be proud of myself, and to never back down from a challenge.

Chandler is often hailed as being the funniest character of the show, and let me tell you — I am into it. He’s crazy sarcastic and has a one-liner for just about every situation. He always knows how to diffuse tension, and he’s always good for a laugh. He teaches us all about the value of much-needed comic relief when life gets stressful (like when your job’s a joke, you’re broke, and your love life’s DOA).

Hidden Lesson: Your past doesn’t define you.

Despite being funny and lighthearted, Chandler had his fair share of struggle as well. His parents divorced when he was young, leaving him estranged from his transgender father, who performs in a Vegas burlesque club across the country. While he used to use his rocky childhood as an excuse to be bitter, throughout the show he began to learn that his parents’ choices were not his own — and that he could be a good husband, father, son, and friend despite his insecurities (and that his parent’s love for him never wavered despite everyone’s differences).

Without a doubt, Phoebe is the weirdest character on the show. She makes a living as a freelance massage therapist (“It’s not always steady money, but at least I don’t pay taxes!”) and as a folk singer (with occasional Iron Maiden covers). She hears voices in her head, reads tea leaves, and believes in animal reincarnation (all in stark contrast to the uber-practical and legalistic Ross). She unashamedly believes in what she believes in, and she never lets anyone tell her that her choices are inferior.

Hidden Lesson: Home is a state of mind, and you get to choose your family.

After Phoebe’s biological father abandoned the family, her stepfather went to jail, and her mother committed suicide, Phoebe and her twin sister went their separate ways — leaving Phoebe homeless and family-less as a teenager. As the seasons progressed, however, she learned to find family anywhere she could — most notably in the love and support of her strong friendships, but also in the companionship of her kickass husband. One of the absolute greatest moments of the series is at Phoebe’s wedding, when she gives this emotional vow to her husband: “When I was growing up, I didn’t have a normal mom and dad or a regular family like everybody else, and I always knew that something was missing. But now I’m standing here today, knowing that I have everything I’m ever gonna need. You are my family.”

After dropping out of high school, Joey went on to become a struggling actor for several years. He performs in a massively wide variety of stage shows, weird TV pilots, and even movies — until finally becoming the star he was born to be. It wasn’t easy, but it worked for him — he never gave up on his dream, even when people doubted him.

Hidden Lesson: The friend zone isn’t a bad place to be.

Joey is famously a bit (okay, a lot) of a womanizer, but he falls head over heels for Rachel toward the end of the series. It’s heartbreaking to watch as he realizes that nothing can ever happen between the two of them, but it’s seriously gratifying to watch the two journey from friends, to not friends, to attempting to date, to realizing that they’re destined to be besties forever. The best part? Both of them end up being seriously okay with staying “just friends” — because sometimes a great friendship is the best relationship of all.

What did you learn from Friends? What’s your all-time favorite Friends quote?