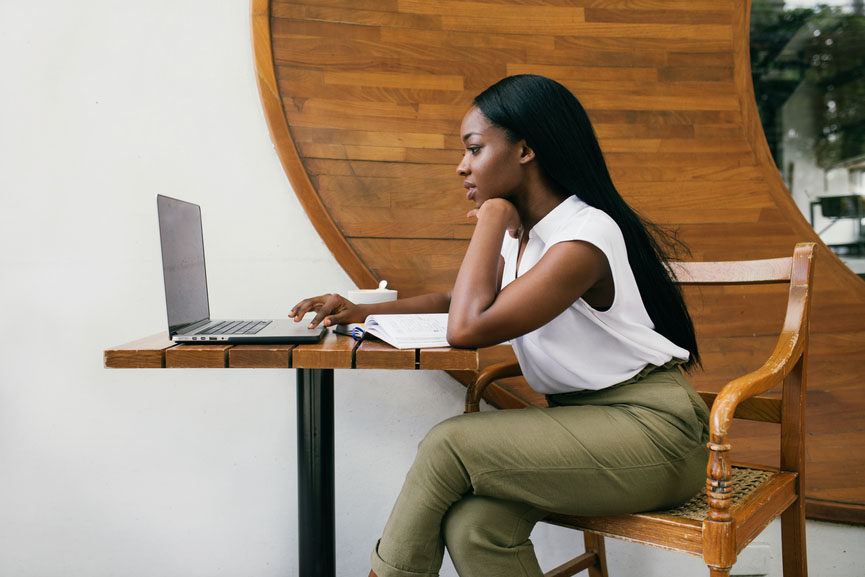 July 2016: that’s when I’d had enough. When I started thinking that there must be another way to lead a more fulfilling and successful career for someone like me: a Black, British woman working in the corporate world. A professional life that, although not necessarily free from the stereotypes that persist everywhere, was at least free to work within a space where my voice is heard and where I can lead authentically.

After I reached that turning point, I started to plan my first online business as a creative outlet. It turns out that I’m not alone in taking the path of entrepreneurship; Black entrepreneurship is growing, with Black women being the fastest growing group of business owners. From 2007 to 2018, the number of Black women-owned businesses increased by 164 percent in the U.S.—more than three times the rate of women-owned businesses. Whether as a side-hustle or full-time start-up, we’re starting more businesses than ever.

Be Black, but not too Black

Most of my career has been spent working for multinational companies. Starting out, I used to think that through hard work and dedication, I’d move up the ranks towards a leadership position; that through a system of meritocracy, my career aspirations would prevail. However, the reality was somewhat different.

In the corporate world for a Black person, blatant racism in the workplace has been replaced by microaggressions, defined by psychologist Derald W. Sue as, “The everyday slights, indignities, put downs and insults that people of color, women, LGBT populations or those who are marginalized experiences in their day-to-day interactions with people,” as per HuffPost Canada.

My personal experience has been wide-ranging, from comments about my assumed overly calm personality—often taken for rudeness and unfriendliness, when in fact, I’ve learnt to scale back my personality so not to offend my colleagues in the workplace. On the one hand, as a Black woman, if you’re too loud or outspoken, you’re seen as aggressive (the “angry Black woman” stereotype), but if you’re too quiet or refrain from speaking up, you have an attitude. Unlike other races, it’s difficult to just be who we are. This unconscious bias means we’re more likely to be referred to as ‘uppity’ (take Meghan Markle as an example) or even arrogant like Alexandra Burke, a Black British female singer whose confidence was taken for arrogance by the British public when taking part in a popular TV show.

My colleagues would settle for the kindred spirits of the other colleagues who looked and spoke like them. Being shut out from these informal networks ultimately leads to less opportunity for promotion and leadership positions for Black women.

The result is not being able to fully show up to work and trying to constantly assimilate to your peers. Years of doing this can be tiring—really tiring.

Adegoke and Uviebinené’s breakout book Slay In Your Lane celebrates successful Black, British women and their stories of how they got to where they are. It describes the Black female experience brilliantly, “Where white women experience career anxiety about the glass ceiling—for black women, this ceiling can feel like it is made out of concrete. Tougher to break down—and ever tougher to break by yourself.”

This isn’t to say that as a woman of any other race you don’t also face difficulties navigating your career—it is most definitely; but it’s the added layer of complexity faced by Black women that often isn’t spoken about.

Companies often talk about diversity as the number of women in leadership positions, which there is no mistaking is extremely poor. According to the Hampton-Alexander Review, only six FTSE 100 companies in the UK have female CEOs. In the UK, this is an improvement from previous years. but if you dig a little deeper, you’ll see that the stats are even more dire for Black women both in the UK and U.S. The number of Black female CEOs at Fortune 500 companies? Zero. In fact, in the U.S., this is a step back following Ursula Burns stepping down as Xerox’s CEO in 2016. (Mary Winston was briefly the interim CEO at Bed Bath & Beyond in 2019, according to Fortune.)

There is a collective of Black women doing amazing things in the corporate world, and pushing through with success. (Take Karen Blackett OBE as an example, UK CEO of Group M, a large global media services group.) There is also the Black British Awards that celebrates Black success in business in the UK.

However, for the majority, the reality is that we work twice as hard—but get half the rewards. Regardless of occupation, level of education, or years of experience, Black women are still paid less than men. Black women in the U.S. are paid, on average, 39 percent less than white men, and 21 percent less than white women. For the UK, although general pay gap data exists, I struggled to find any real data on Black women’s pay discrepancies. Companies usually fail to even gather data broken down by anything other than gender.

The future is bright

As the saying goes, with adversity comes opportunity, and frustrated with being employed below our skill set, silenced, and paid less than our peers, we’re taking things into our own hands.

There is a new wave of successful Black businesses led by women. Take, for example, Muhga Eltigani, founder of NaturAll™ Club, which produces natural hair products and has received $1.2M in funding. Also, Christina Okorocha, Ruby Aryiku, and Rumbi Mupindu, the co-founders of VAMP, a social marketing agency focused on showcasing under-represented groups.

Starting your own business is by no means an easier path to take. With entrepreneurship comes its own challenges. I myself am no stranger to failure—my first business idea failed, but I learned a lot along the way. Lack of access to funding is one of the biggest hurdles faced by the Black start-up community, but there are efforts being made to fix this gap, with venture capital firms such as Backstage Capital investing in underrepresented founders.

However, Black entrepreneurs have decided that it’s a path that’s worth at least attempting to take. This is the case even as a side business; a safe environment where we can try new things, learn new skills, and lead authentically in a way that we feel we can, and not in the way the corporate world thinks you should.

It’s a journey, one that I’m on myself, but that I find incredibly worthwhile and fulfilling. Despite the unique challenges we all face, understanding these challenges can help us all to navigate and support each other along the way.