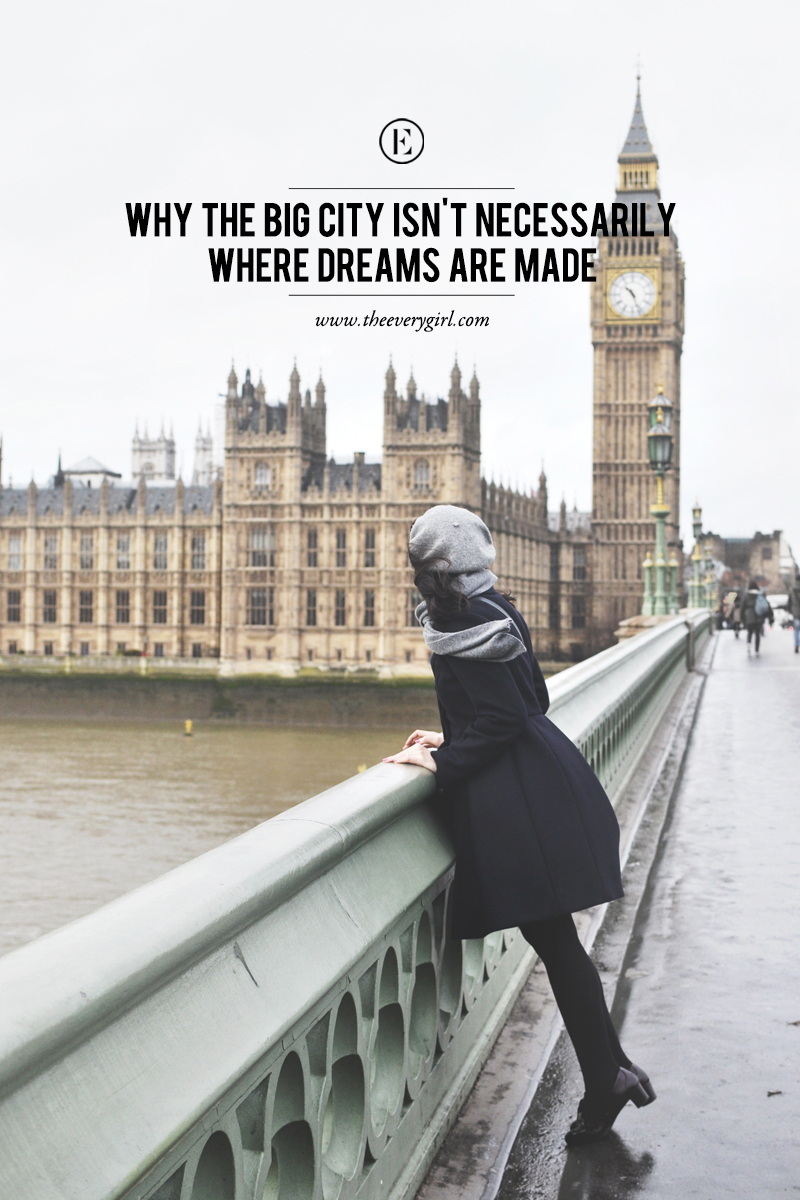 As a young girl I dreamed of moving to the “big city.” I knew I wanted to work in fashion and it felt, to me, like moving to London was the fastest way to pursue my ambitions. Set on following my dreams, I secured a place at University and worked my way through to complete my degree. During this time, I also started my blog The Elgin Avenue, which I maintained in addition to my schoolwork.

During the first three years I was very happy with city life, waitressing part-time in a local restaurant, interning, attending class, and creating content for my site. I didn’t foresee my state of happiness changing, and when I graduated, I couldn’t have been more excited to embark on my new goal: full-time blogging in, you guessed it, the big city. So I graduated, quit my waitressing job and internships and focused full-time on my site which, by this time, was a business in itself.

Things, however, turned out in a way I wasn’t expecting. My big city dream began to unravel and within six months I found myself leaving the city and moving to the countryside. Here is why I made the move and ultimately the benefits I discovered.

The big city dream isn’t for everyone.

Cities can be incredible places full of culture, exciting opportunities, and interesting people. But for all the positives, cities can also be very difficult places to live. I found myself caught in an expansive and expensive situation. I found myself increasingly buckling under the pressure of high rent, and feeling lonely working from home with my friends living on the other side of town.

You would think that living in the same city I would see friends often, but with journeys of one hour or more across town, it just wasn’t that easy to see one another. I could feel myself becoming isolated. Everything came to a head when I was on the phone with my mum, and something triggered a reaction—I burst into tears and finally realized I wasn’t happy where I was.

Cities are expansive and expensive . . . I realized that in order to pursue my own values, I had to re-negotiate my living circumstances

There were many things contributing to my overall feeling of unease: finances, isolation, a difficult period of deciding who I was (common in your early twenties, I know), and being caught in a “comparison trap” (estimating my worth against the perceived success of others). It was exhausting and not making me happy. I realized that in order to pursue my own values, I had to re-negotiate my living circumstances.

It’s OK to give up on your dream—and opt for a new one.

The prospect of leaving the city filled me, to my surprise, with huge relief but also hesitation. I still planned to blog full-time, but I worried how I would be viewed by my peers and business contacts. Would I still be deemed “relevant?” I decided that the relief far outweighed the hesitation and I set about moving to a beautiful cosmopolitan countryside town.

And just when I decided to leave the city, I took a holiday with my dad in Menorca, Spain. I needed a break to regroup my thoughts and rest. Having battled with the pressures of my unhappy life in the city for six months, I was exhausted. That first night I slept for fourteen hours straight. And for the first few days I couldn’t think about anything serious; it was as if my mind and body had shut down to allow itself time to heal and regroup. In a way, I imagine it was a short grieving period for my big city dream—I realized I needed to let it go.

Toward the end of our holiday, I took out a pen and paper and wrote down two lists: my core values as a person and my accomplishments so far.

Soon enough I found myself mapping a life I wanted to live, and the values weren’t based on any specific location.

My confidence was at rock bottom and I felt pretty down about everything that had happened. I wasn’t sure how I was going to progress with the life I wanted to build. And so I wrote down all of the things that are innately important to me—being close to my family, being kind, working in an environment I love, and soon enough I found myself mapping a life I wanted to live, and the values weren’t based on any specific location.

I realized that things like financial freedom were hugely important to me, and that I needed to find a way of living which allowed me to truly embody these values.

My second list of accomplishments surprised me. Working so hard for the ciry dream, I had rarely taken a moment to acknowledge what I had achieved. When I read back through everything I had done, I felt proud of all the small milestones which led up to the life I was leading.

I realized that there was more to life than ‘what you do’ and that it was more important to focus on who you are.

Armed with my list of values and accomplishments, I felt infinitely more confident returning from holiday than when I’d left home a week earlier. (A tan and a new haircut helped too!)

I realized my old dream still existed, but it had evolved: I still wanted to work in fashion and on my blog, but I needed to fulfill my core values too. I realized there was more to life than “what you do” and that it was more important to focus on who you are.

I often say I believe happiness causes a ripple effect—if you are happy, it positively impacts every area of your life.

Though I was concerned about leaving the city, once I prioritized my happiness everything else fell in to place. My relationship with my friends, family, and boyfriend became better and more real and I finally felt awake. (I felt like a complete zombie toward the end of my time in the city.) I have also enjoyed the most rewarding period in my career after leaving behind any thoughts of comparison.

My overall wellbeing has increased ten fold. I now live in a beautiful countryside town, my boyfriend and I live in a two-bedroom maisonette and we pay less than half the rent I did previously for a space double the size. I even have a home office in a room all of its own!

I learned that living in an environment that stimulates your happiness is critical. I love living somewhere I can take a walk in the fields but where I can also get a killer flat white coffee. Because yes, moving out of the city doesn’t mean giving up a luxurious lifestyle—far from it!

There is life outside the city.

It’s easy to have your blinkers on when you live in a big city as there are so many exciting things happening all the time. With so much to entertain you, it seems unfeasible that anywhere else could be as exciting! However, I can confirm that there are many cool things outside of the big city.

In our countryside town there is a fabulous tapas restaurant, pizzeria, Indian restaurant, and many buzzing watering holes. There are cool cafes, delis, bakeries, and even boutique shops which stock the likes of Anya Hindmarsh and Valentino!

Giving up the city does not mean giving up your lifestyle—if anything it is opting to select a lifestyle which best suits YOU.

In a smaller town there’s a real sense of community. I know our neighbors look out for us, and vice versa, and we are only a few steps away from some great friends who all lead interesting successful lives. Giving up the city does not mean giving up your lifestyle—if anything it is opting to select a lifestyle which best suits YOU.

Work is out there.

Work was one of my greatest concerns when leaving the city—I felt I was risking being deemed irrelevant by my industry. (I need not have worried!)

Once I made the change, and realized how unhappy I had been pursuing work in the city, I opted for an honesty policy with anyone who asked why. I shared my experience (edited down for ease of listening!) and discovered that many people could relate to the feeling of pressure and never quite catching up with yourself. I discovered that there was support in my industry I didn’t even know was there, and in opening up I secured true relationships. I discovered that I was very much not alone, which in itself was a huge comfort. So many people, if not every person, I spoke to had been through similar feelings of doubt.

By moving to the countryside I was not giving up my work, in fact, I was scaling back my costs so I could reinvest in my small business.

For me, the city is still important—I take meetings there once a week and attend events often. I fell back in love with the city once I could view it for all of its exciting possibilities and culture once more. By moving to the countryside I was not giving up my work, in fact, I was scaling back my costs so I could reinvest in to my small business.

One of the greatest lessons I learned is that financial pressure can cripple inspiration and motivation, especially when you are constantly worrying about paying next month’s rent. It’s hard to come up with new content for your website, or innovative ideas for moving your business forward if worry is always present. With the help of my boyfriend, I set up a life that works for my budget—leaving me with the creative headspace to pursue the career I wanted. I have never had a better financial year or worked on more exciting and fulfilling projects than when I left the city and put my happiness first.

It has now been two years since I left the city, and I cannot believe how much my life has changed. The biggest shift for me was prioritizing my happiness first and in doing this everything else fell in to place. I love waking up every morning, being able to go for a walk in the beautiful rolling fields near our house, buy fresh fruit from the market vendor we live above, and generally enjoying where I live. I am pursuing a career I love and have been able to reinvest and grow for the future.

I have certainly made adjustments over the last two years to further maximize my life in the country. I schedule my meetings in bulk so I only have to travel once a week, I see friends and make date plans with my boyfriend often, and generally try to appreciate everything, every day, for what it is. I am no longer hung up the pressure to do things which ultimately don’t feel like a good fit, even if they were once part of my dream plan.

The big city isn’t necessarily where dreams are made and it is OK to recognize this, to do something about it, for you.